Oh Backflow, it was love at first sight wasn’t it? Maybe it was your charming little rainbow app icon, maybe it was the lesson you teach people about recycling, but I’m pretty sure it’s the way your name makes me giggle a little. So does the actual game give me the same enjoyment that it’s name alone does? 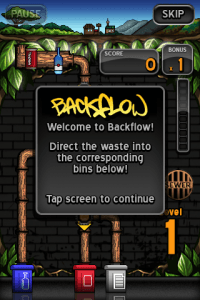 Backflow (hehe) runs on the concept of sorting rubbish into it’s destination, there are four different types, cans, bottles, paper and sewage. Before you also get giggly, the sewage is actually fish bones. Which I’m not sure is where they’re actually meant to go, so I don’t know what that does to the recycling and waste disposal knowledge of the game. 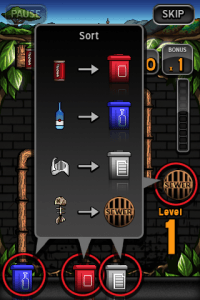 You sort the waste by changing the direction of the switches (any direction but back where it’s come from), while the waste comes down the pipes. At first it crawls down incredibly slowly, and I got frustrated with the sluggish pace so I spammed tapping the top of the screen where the rubbish was coming from so that it would come down quicker.

You have five lives in the game, represented by the colour of the sky, which gets darker and way more unnatural as you lose lives. Because when you sort a glass bottle into a can recycling plant everyone knows that the city takes a massive health hit. There are also items that give you an instant multiplier, replenish your lives, slow down the speed, and shield you from your next mistake. These need to be sorted into the glowing bins in order to get the bonuses. 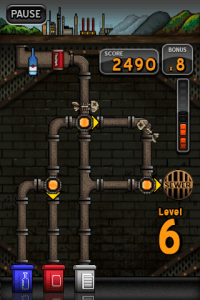 Now all of this information came in a giant clump during the tutorial, I know it isn’t too big of an issue but personally I think that tutorials are usually better when they’re spread out so that you can absorb it more instead of just feeling bombarded by it.

There are twenty-five puzzle levels with three different difficulty levels, which affect the speed that the game starts at. The time difference between each level isn’t a huge step up, but you do get higher points for harder difficulties. Some of the levels and pipe designs are a bit odd and you have to remember that for cross pipes that don’t have directional switches you have to be careful with what switch you use earlier on in the piece of waste’s journey. These five lives are meant to take you through the entire game, though you get an achievement for making it through all the levels without losing a life. 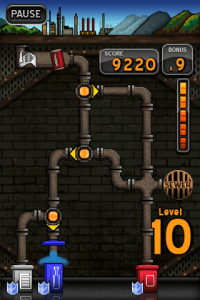 There is also Survival mode, which involves you trying to survive through each level without losing your lives. Surprisingly you also get five lives for survival mode, and you have to try and make it to a certain number of points. You unlock each level as you finish it in normal mode, using whichever difficulty level you like.

The thing about normal mode that kind of annoyed me was that there was no menu showing which levels you’ve unlocked, so you can’t jump to the unlocked levels. Instead of being given a new slate for each level in terms of points and lives, you play through from beginning to as far as you can get. I honestly would prefer to get fewer lives and have them replenished with each new level. 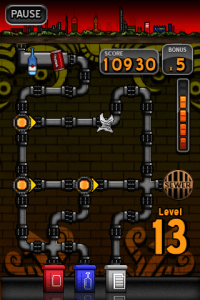 Another issue in the same vein as the whack-it-in-your-face tutorial, there is only four types of waste for the entire game. It starts off the same as it ends, and the only learning curve is when the speed increases, and to be honest that isn’t a very challenging curve at all.

Instead of having OpenFeint and Game Center capabilities, Backflow just has an achievements section where it lists your achievements to date whether they be finishing all the levels, finishing a survival, or whatever else you may have done in the game.

Visually Backflow isn’t anything special, you’ve got the city above, which changes colour from blue all the way to danger pollution red. The visual style is very simple, like the rest of the game. That isn’t necessarily a bad thing, given the simple gameplay. If the graphics had been anything wonderful they would have probably looked out of place.

The soundtrack is really odd in the way that it has absolutely nothing to do with the tone or content of the game. It’s this kind of odd sweeping orchestral music, and doesn’t help you get in the mood for fast paced waste sorting.

Backflow is an interesting little puzzle game, with an interesting concept. However, the way the game goes about introducing itself isn’t the best and the game’s learning curve isn’t any where near challenging enough to make you completely invested in it. However, if you’re just after some quick plays in a simple game then this could work well for you.