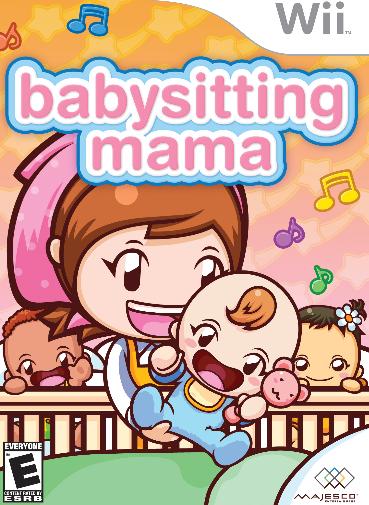 Babysitting Mama is the latest title in the “Mama” series and made exclusively for the Nintendo Wii. The game puts Mama as your guide the whole way through as you venture into childcare. The game also comes bundled with a real plush baby which is used to control the game by sticking the WiiMote into a slot on the doll’s back. Before I even get started with my review, I will note that this title is mainly for the younger crowd, parents, and those who are already fans of the Mama series so keep that in mind as well from beginning to end. Either way, here is my review for Babysitting Mama. 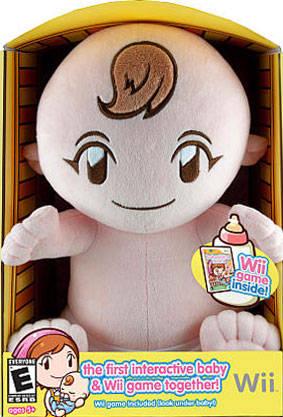 Story
There isn’t much of a story to be told with this title, as Babysitting Mama is as advertised. Babysitting Mama puts the player in the role of Mama’s helper as she enters the field of childcare. From feeding, burping, playing, and many other activities, the game does a great job of simulating the childcare experience. The more that the game is played, the more that becomes available to unlock from photos, to mini-games and even new babies that all vary in appearance.

Gameplay
Most Mama games play in nearly the same matter, play mini-games to accomplish a goal, and move on to the next objective. Babysitting Mama is not any different from that aspect, but the means of getting to that point are what makes this title so different. Using the doll with the WiiMote properly inserted, the first screen you will see upon entering the main mode of the game is to pick your baby. Since there is only one available at the start, “Yuto”, who matches the doll bundled with the game, is the only choice available starting out. 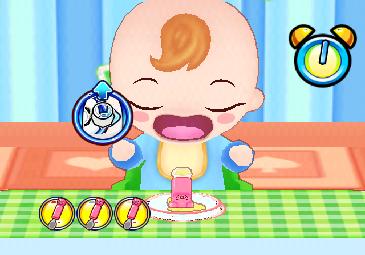 The first thing really to talk about is the dolls themselves, as alone they are bright, cheery and soft to the touch which should make them perfect for younger girls alone. When the WiiMote is inserted the speaker for the WiiMote is used to the most full potential I have seen it used on the console to date, as throughout the whole game, the baby’s cries, laughs, and any other emotions can be fully heard throughout the experience and very clearly I might add so at times the doll can be eerily realistic sound-wise.

Each “Stage” consists of four to five levels where different objectives must be completed to be judged at the end by Mama. Each time you perform any task, you are judged and given a specific medal which carries into your overall score.

Speaking of the levels or “tasks” in the game, there is a lot of content in the title and each task performs different from the next. Some levels are a bit on the simple side and mainly consist of rocking the baby back and forth to lull it to sleep or moving the baby up and down to simulate bouncing or playing with it. These may sound like nothing, but with the timer and the precise amount of movement needed all being picked up perfectly, you really have to balance all of these simple notions accordingly. One wrong move and you will soon see the “DON’T SHAKE THE BABY!” screen show up (Something which happened many times to myself). There are many different variants of these levels but a few too many can make them feel like rewashed content at times.

Other mini-games consist of patting the baby on the back to burp it, walking the baby to match the movements on the screen as it takes it’s first steps, and many others as well. Some of these resemble a bit rhythm-action style, much like other mini-games in the Cooking Mama World. Not all of the mini-games require the doll though as the nunchuck is used by itself and in combination with the WiiMote fitted doll many times as well. Bathing, diaper changing, feeding, and many other tasks perform smoothly and the motion controls never gave me any problem whatsoever during my full playthrough as they are surprisingly accurate. 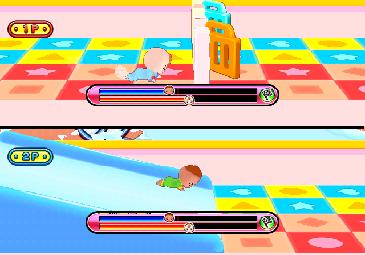 There is also a multi-player portion where you can battle another sitter’s child in local multi-player in the mini-games the overall title is made up out of. There are 6 different babies and 40+ different mini-games along with many unlockables such as photos to add to your scrapbook and other extras, I can see hours of replay value added in easily to keep the kids (and even the parents) interested the whole way through.

One thing I personally liked the little things Babysitting Mama does to really enhance the simulation of Babysitting. There are other children in the household and without notice, an accident can interrupt the mini-game you are in and you will suddenly have to make a quick dash to take care of whatever happened. These work kind of like quick time events except for the fact that a fast-paced mini-game is used to clean up or fix whatever problem is at hand. Once you finish, you immediately pick up right where you left off in the main game. This really was a great change of pace and fit perfectly into the experience as these things can happen in the real world so it could easily teach the young player how to multitask.

I will say this little red-haired brat soon grew to be my enemy as she was usually the culprit behind it all, I called her Codename RED and I felt my own eyes in flame as spills were made just for me to clean up while I do all the work and she just breaks everyth….erhmm..back to the review….

Graphics/Audio
The graphics in the game are all very colorful and made up of charming 3D models and backdrops. Images are very vivid and bright, setting the cheerful mood for the whole game. Each baby looks different from the next and is emotions are easily visualized which makes it easy to know if more is needed to perform whatever task is at hand better. There are also may different areas, ranging from the park to the bedroom, which are assigned based on the objective you receive. Even with the somewhat generic menus and loading screens that consist of the message “Never Shake the Baby”, Babysitting Mama’s high quality presentation can easily pull you in from start to finish. 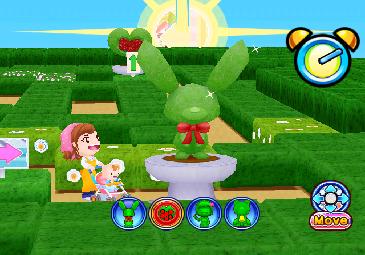 The music blends together perfect with the visuals as well and upbeat tunes carry on through the game. Nothing is too memorable music wise, but it got the job done just fine. Sound effects such as rattles, toys and other noises all came across decently, too. As for Mama, I don’t recall a title where she has talked more. If you have ever played the Mama games, you should know she sounds a bit like a Japanese woman who just learned English and I was surprised of how many more phrases were added in, accent and all. The baby also sounds very realistic, and aside from the LOUD crying which is received from the WiiMote, each baby sounded as they should, giggles and all and each also sounded different from the next to me, so it was great to not see reused voices throughout the game.

Overall
From a personal perspective, there is a lot that makes this game for a certain audience alone. For the most part, that stands true after my time spent with it even though I did enjoy many elements within the title and it is still a solid addition for fans of the Mama series. But as I knew when I started playing the game, I am not in this target audience and with that being said, this is a spectacular game for younger girls without a doubt and a perfect choice heading into the holidays for any gaming family. There are a few rehashed elements in the game, but there is also a lot more variation included which outweighs those moments as the game does great at switching up the pace making each experience feel new and fresh. In a market filled with “LetsJustMakeABuck” quickly thrown together messes labeled “kid’s games”, Babysitting Mama shines through as a title with great controls, solid and fun gameplay, and tons of replay value to keep the younger batch wanting to go back again and again.

I Give Babysitting Mama: