Avengers Initiative starts off its first episode with Hulk. The Pulse has broken up The Vault that held many super villains in prison and Nick Fury of S.H.I.E.L.D. has assigned Hulk to capture as many of the escapees as possible while Fury tracks down the rest of The Avengers. Eventually, the rest of The Avengers will be rounded up to solve the mystery of The Pulse and the breakout at The Vault. But for now, the first episode focuses on the Hulk beating down on villains such as Zzzax and the many nameless henchmen that put themselves between Hulk and his target. 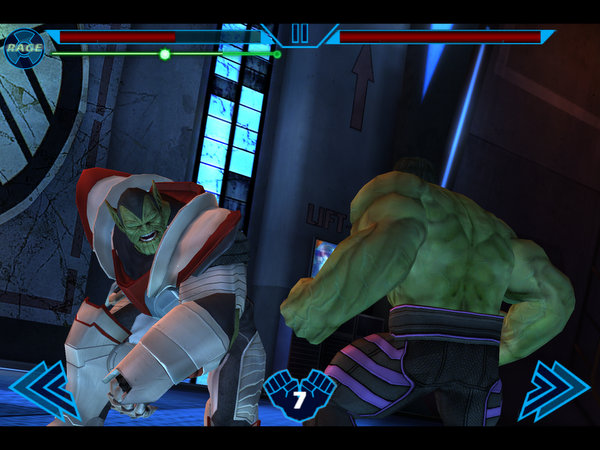 The story is told through cut scenes and audio logs found scattered around the game. The audio logs can be accessed through signing up with the Marvel XP program. As a person not particularly familiar with the comic books, I felt a little lost on the plot. I strongly recommend at least watching The Avengers movie for some background before playing the game. The dossiers accessed through the Marvel XP program are rather extensive and provide an interesting read.

Avengers Initiative is a touch screen based brawler.  Players have the ability to side step, block, or deflect attacks by either tapping the correct buttons on the UI or swiping in the correct directions to stop incoming damage. Once the enemy is stunned, players can slash the enemy to deal out damage. There is a combo system in place for players to dish out extra damage. As their rage meter builds, players can unleash a variety of special rage attacks to do extra damage.  In between combat rounds players will travel from place to place by tapping on highlighted areas in the environment while seeking out hidden bonuses scattered throughout the area. Players can also play a mini game to acquire ISO-8 currency and equip-able augmentation shards. 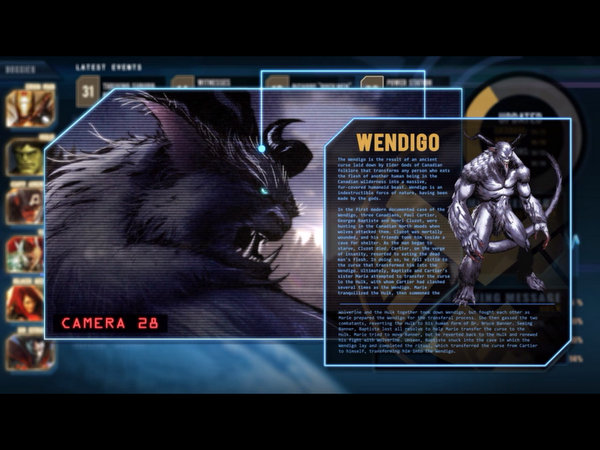 The combat is well done. I found that learning the directions to sidestep and was rather challenging as you could not automatically sidestep into an attack to guarantee a dodge. Instead, I had to watch the attack and see where the attack did not strike so I could dodge into that safe area. I found the timing for deflecting was a little off to me. Personally I would assume seeing the enemy about to hit Hulk was the right time to swipe to deflect. Instead I discovered the correct time to swipe is the beginning of the attack animation. The combo is simple enough that players do not need to remember twenty or so different combos. Instead, they simply need to know a certain amount of swipes in the same direction followed by a certain amount of swipes in a different direction. This allows for a fewer amount of specific combinations to memorize yet still provide enough of a variety that players do not fall into using the same four combinations over and over. The rage attacks are varied; players must choose three rage attacks from a variety of purchasable skills to equip. These rage attacks can also be used at specific fights to cause environmental damage. These help bring more variety to the combat portion of the game.

Stats are player distributed as the characters level up. Players are also able to equip different augmentation shards and costumes for their character that modifies skill points. These can be purchased with the in-game ISO-8 currency and provides a great amount of flexibility for play style. In addition, bonuses are given to players for completing fights in a certain way. Additional bonuses are given for joining the Marvel XP program. This program seems to be strongly recommended as the in game audio logs can only be accessed through this program. This program also links players to the Marvel: Avengers Alliance Facebook game. This is advertised as linking multiple games that will span across an epic storyline, starting with the Avengers Alliance Facebook game. This is a strong sign that Hulk’s story is the first episode of many for the Avengers Initiative game. 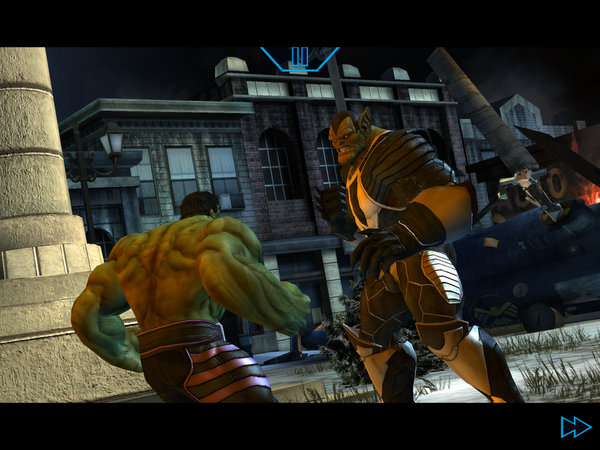 The visuals in Avengers Initiative are top notch. The visuals mix a realistic style with a touch of comic book looks. The game looked great on the new iPad’s Retina display with zero slowdowns or FPS drops. I found animations to be smooth and realistic for the most part. I found Hulk’s walking animation to feel a little awkward and unnatural, but that was made up for by excellent combat animations. The UI is a good size on the iPad, although I would have preferred to see customizable button sizes as I tend to prefer my dodge buttons to be on the larger side on the iPad.

Avengers Initiative is fully voice acted by an excellent cast. I do not think it is voiced by the original movie cast, but the acting is some of the best on the iOS platform. The music is moody and great the listen to and the sound effects are bone crunching. I strongly recommend playing this game with the sound on simply for the voice acting. Players do not have to use headphones, but it will improve the audio experience. 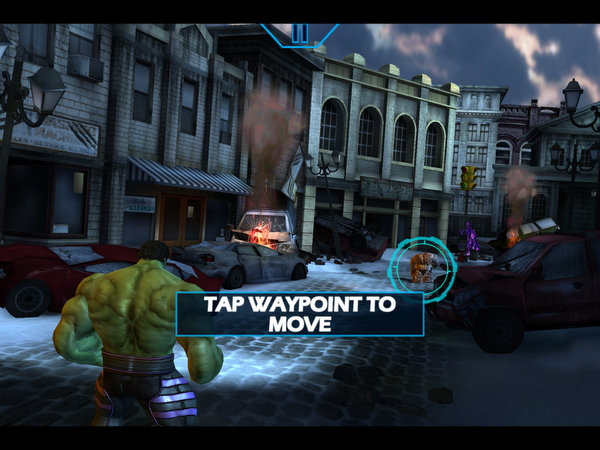 Avengers Initiative is a great game. Although currently a little short, there seems to be an extensive episodic content plan in place. Right now, $6.99 may be much for a game of its current length, but if the content drops continue as planned, it will make the $6.99 price look like a great deal. The game mixes strong audio and visual experience with a great combat system and an epic plotline that is supposed to span multiple games.