Aven Colony is a city building sim from Mothership Entertainment. Players take on the role of a famed governor from Earth who is tasked with setting up the first colonies on Aven Prime. To succeed, players will need to keep colonists happy while contending with the hostile environment full of plague spores, lightning storms, and alien life.

While Aven Colony does not contain a novel’s worth of story, the game has a surprisingly beefy story for a city builder. The campaign follows the conquests of the famed governor from Earth as they establish the first colonies outside of the Solar System. Along the way, players are supported by a team of scientists, bureaucrats, and explorers that will send field reports, request for help, and chat among themselves about the mission and the world of Aven Prime. The dialogue is well written. It moves confidently between humorous moments and more serious notes as dangerous new lifeforms are discovered on the planet. I understand that the expectation for the amount of story content for a city sim’s campaign is quite low, but Aven Colony’s is done so well that I often found myself sitting in campaign missions wishing for more. 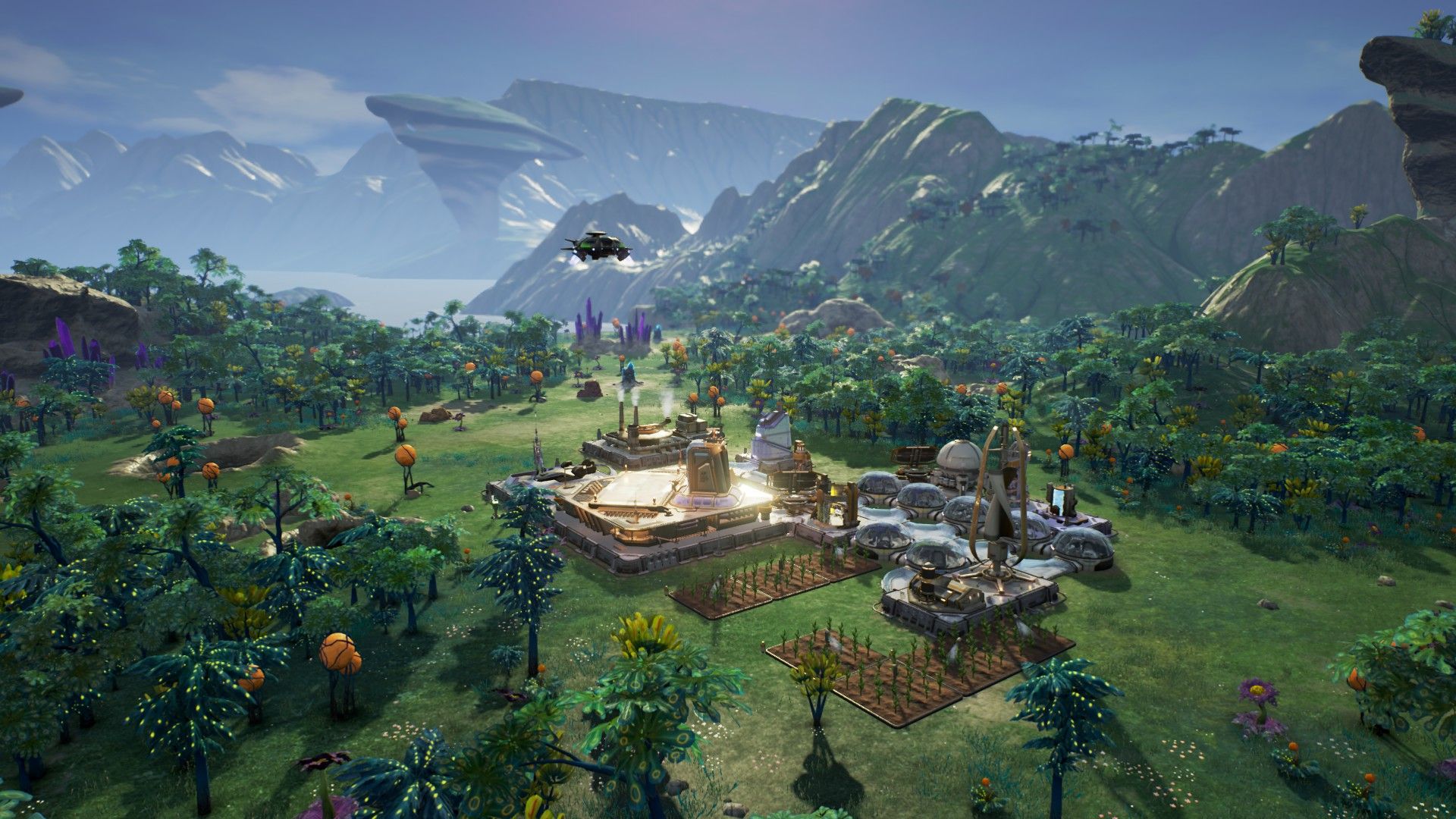 Aven Colony is a city builder in the same vein as the modern Tropico and Anno series. Players start off with a small colony with a small bit of housing, storage, and power. While the colony is small, the needs of the colonists are very basic. Colonists need food and water to survive. Buildings need nanites for construction, available power in the grid for maintenance, and workers for production.

Players will soon encounter Aven Colony’s first twist to the city builder genre: winter. Each Sol consists of all four seasons, with winter bringing special penalties. Night will fall on Aven Prime and the weather will drop, causing the power output of all solar panels to halve, farms to stop producing food, and greenhouses to halve its food production. Lightning storms will also randomly occur during winter, damaging any buildings it hits. To compensate for the loss of solar power, batteries and lightning rods can be built to harness some of the power for a short-term boost to the power grid.

As the game progresses, research options open up a variety of processing options that will give colonists new luxuries, defensive options for the colony, and ways to process the native plant species into edible foods and drugs. Of course, as the size of the colony grows, so do the demands of the colonists. Keeping colonists becomes challenging as they will demand a more varied diet, short commutes to work, entertainment, better policing, and consumer goods from home. Failure to please the colonists will result in the player losing the next election and getting the boot. 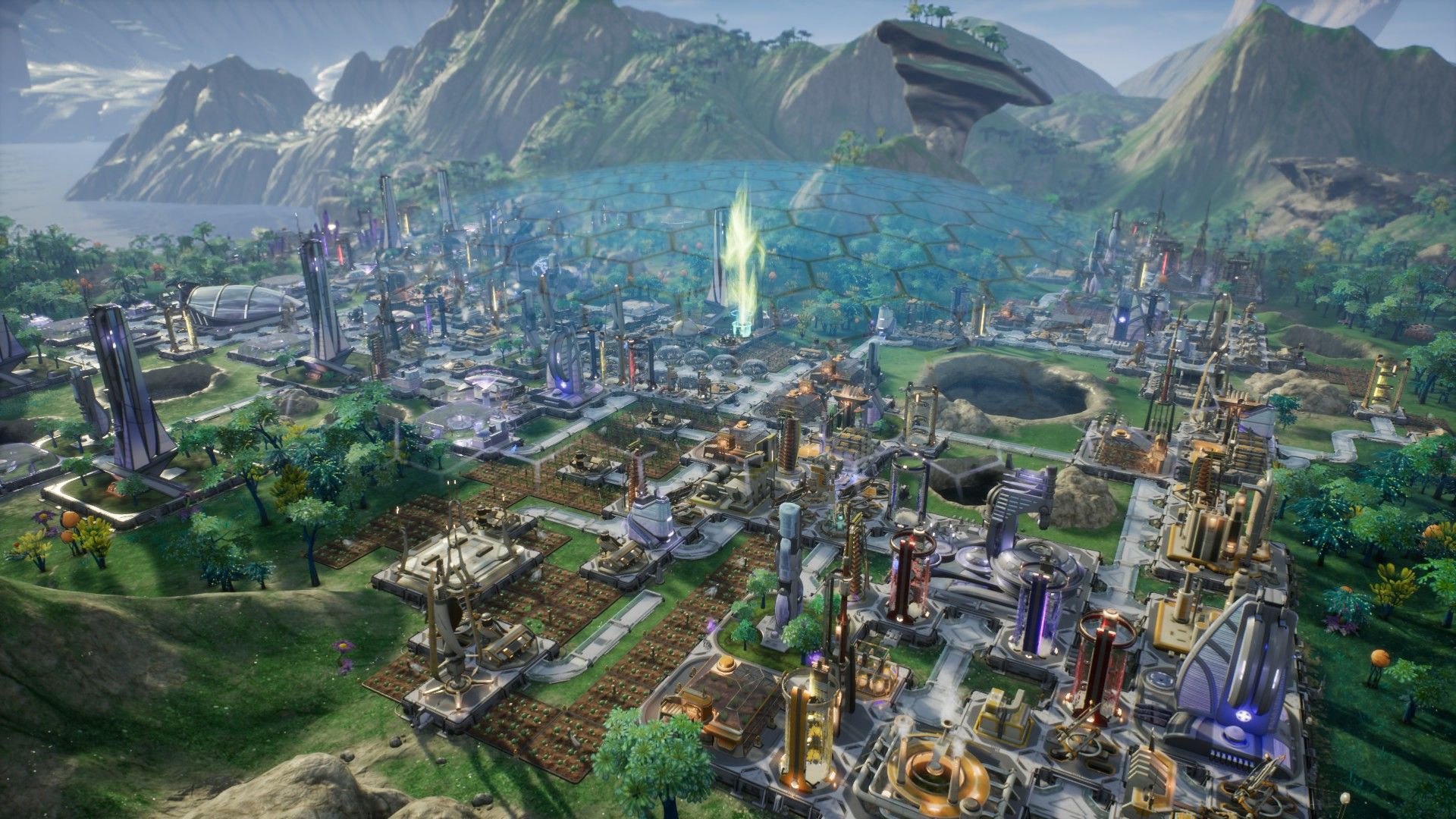 As if the needs of colonists weren’t challenging enough, Aven Prime’s hostile environment makes every effort to bring disaster to the colony. The beginning of the game is usually limited to lightning strikes and ice storms that can damage buildings. Eventually the game ramps up the environmental difficulty along with the expanding needs of the colonists. Uncapped geothermal vents will belch toxic gas that is sucked into the colony’s air system through open air intake fans. Aven Prime’s native species will begin attacking the colony. Plagues and parasitic spores will damage colonists and buildings, requiring hospitals and scrubber drones on standby to clean up the mess. Automated defense turrets can help shoot down some of the spores, but spores sometimes sneak their way through.

Aven Colony’s controls and UI are excellent. The controls are simple and everything can be accessed with either hotkeys or through the UI. The menus are easy to navigate and are well organized.

Aven Colony has players juggling a few more balls in the air than other city simulators, but it really does not bring anything innovative to the table. Managing Aven Prime’s hostile environments does not require any new game mechanic, just a few extra buildings that need to be placed. The expedition system is a neat mechanic, but does not provide enough of an impact to the game to feel meaningful. While Aven Colony may not be particularly innovative or deep, Mothership Entertainment makes up for a tightly polished experience. The game is well balanced, and the difficulty ramps up at a nice pace. 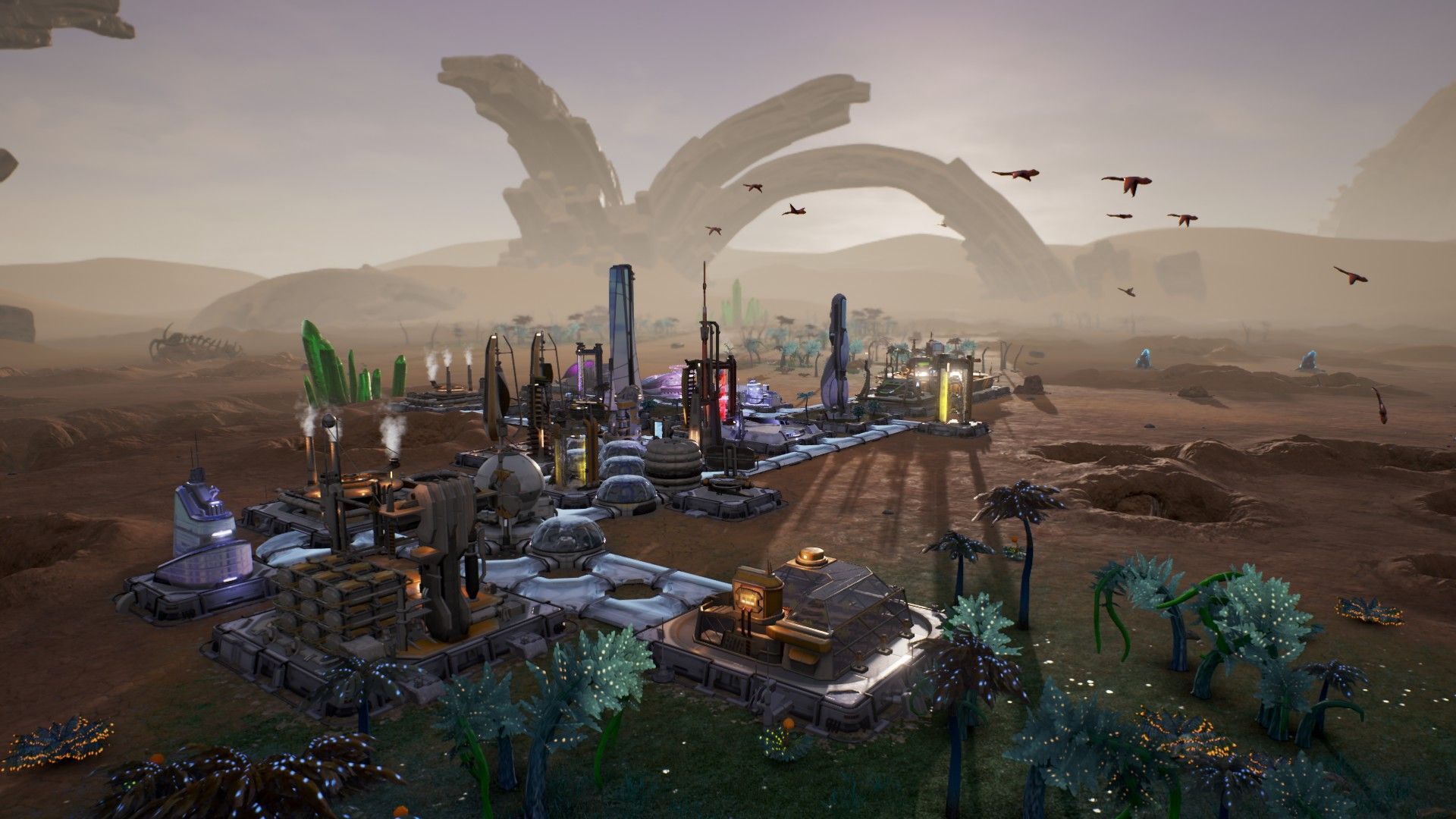 The campaign mode provides a variety of scenarios that offer different challenges for players. Unfortunately, this is where Aven Colony’s gameplay stumbles the most. Tackling these challenges only requires a slight adjustment to one’s strategy before players can carry on as normal. For example, one scenario placed players in an arctic zone where food was supposed to be nearly impossible to grow, so players were supposed to trade the plentiful minerals to ensure a steady food supply. Instead, it was much easier to simply create a smaller farming colony at the distant temperate spot and ensuring the main colony had a steady food supply. From there, the campaign mission boiled down to completing all the objectives provided until the victory conditions were met.

The art style in Aven Colony is excellent. The human colony has a futuristic sterile silver design that contrasts well against the vibrant organic colours of Aven Prime. The art used in the UI is of high quality and matches the game’s aesthetic well. 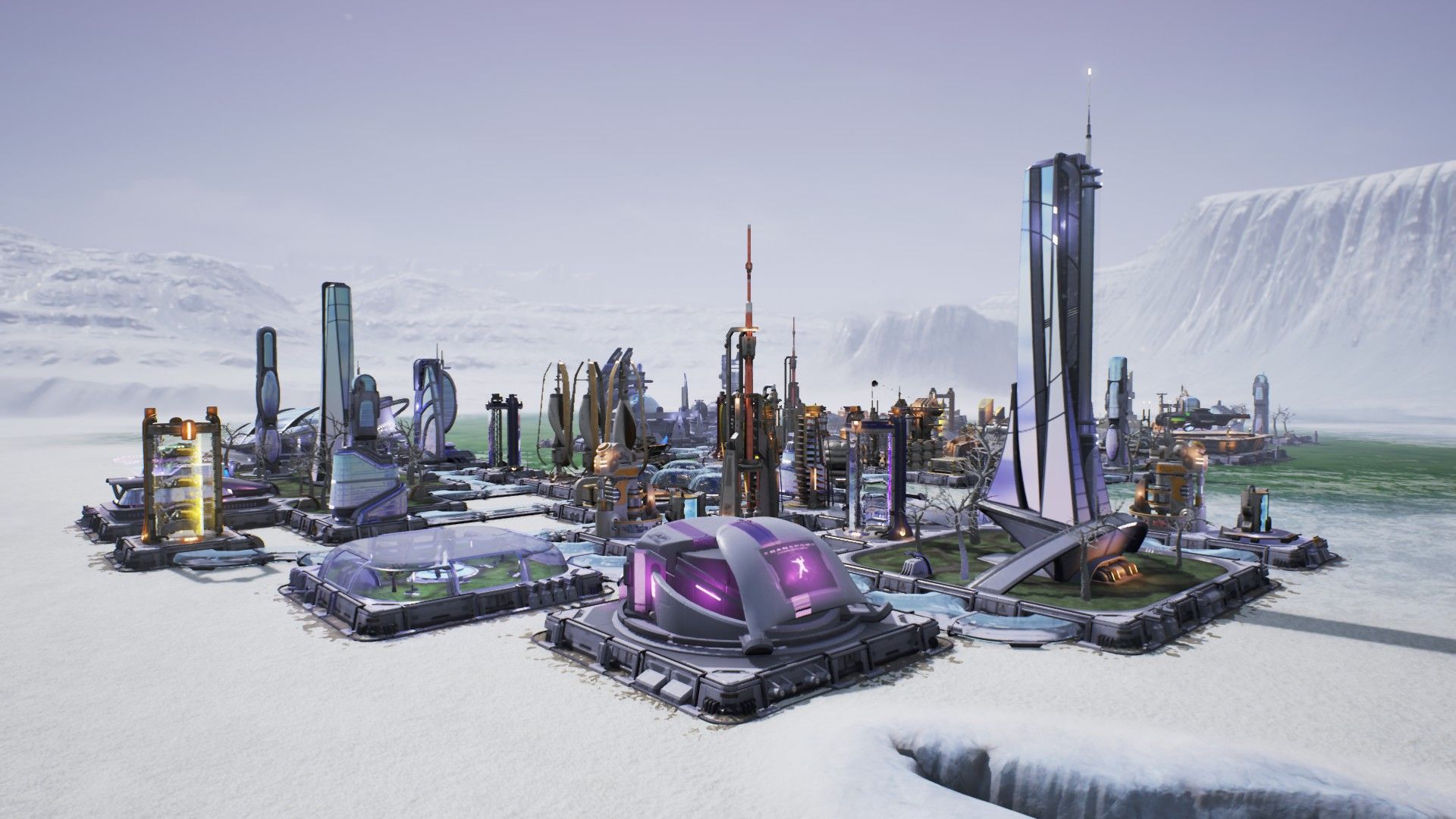 Aven Colony is built on Unreal Engine 4. The game runs well, but it still exhibits Unreal Engine’s characteristic texture pop. The textures on maximum settings feel a little on the low-resolution side and can be a bit fuzzy at times; however, it does take some pretty close examination to pick it out. I noticed a persistent visual glitch with the Trade Hub building during ship take offs that would result in a flickering case of goods on the landing pad.

Aven Colony features a solid audio experience. The sound effects are very good, and the soundtrack is an enjoyable listen. The voice acting is fantastic. The quality of acting is easily worthy of a full triple AAA game and made the story a more enjoyable experience. 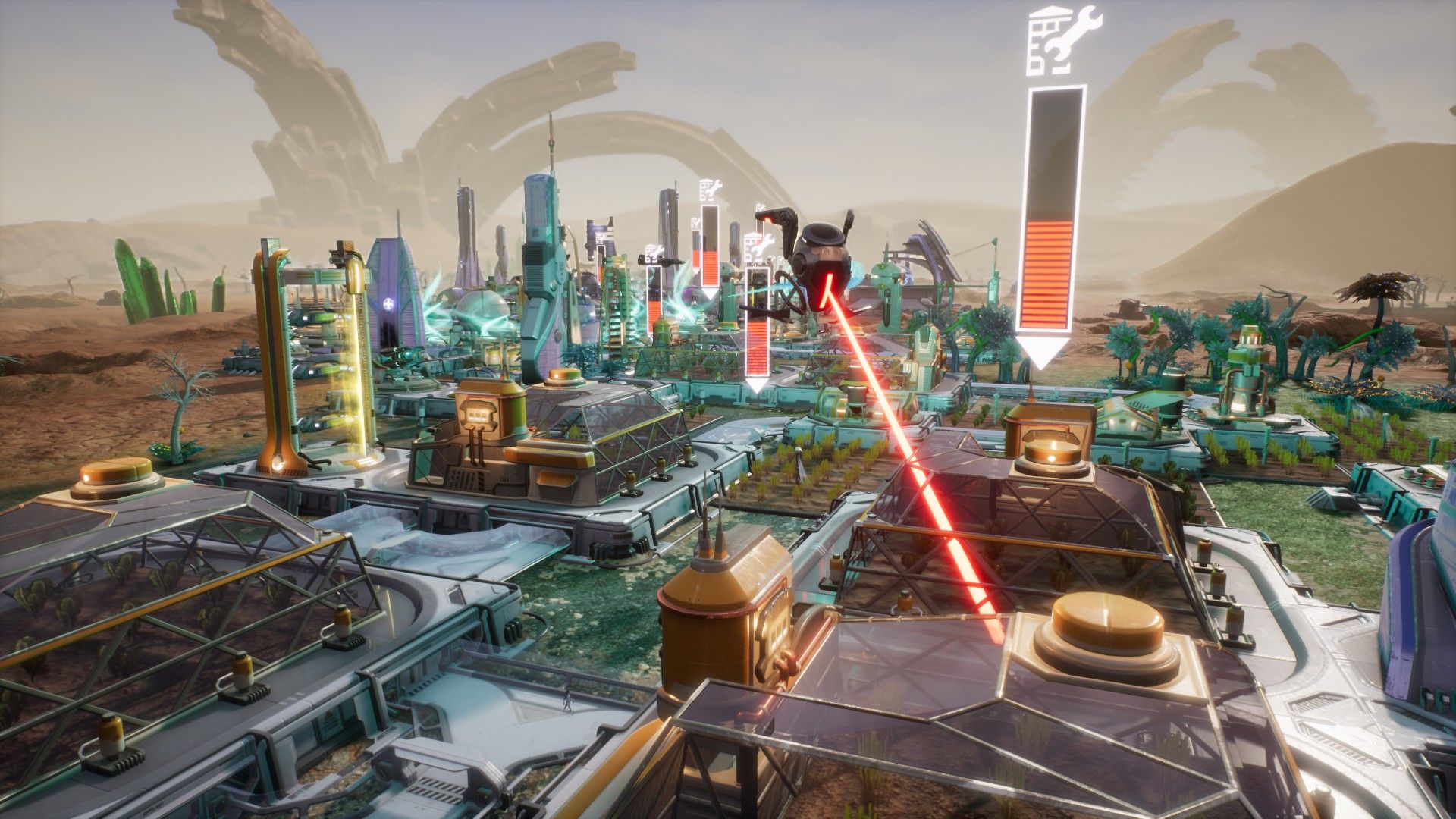 Aven Colony is a decent budget city sim. Aven Colony’s campaign could use a deeper challenge, but at least it boasts a good storyline for a city sim. The audio/visual experience is good, though the textures feel a little fuzzy at times. While Aven Colony is probably a bit too shallow for the hard core city builder fan, the game is polished enough that it probably would make for a great game for a newbie looking to get a taste for city building sims without plunging into the deep end or paying for a full priced title. Aven Colony does not have the depth or the content to stand up against its full priced competitors, but its low price point makes the shortcoming a lot more intriguing.

Though lacking in innovation, Aven Colony is a budget city sim that delivers a polished experience.
7