Avadon: The Black Fortress is an independently developed role playing game for the PC. The game features decent story elements and plot lines with some interesting events and characters. Graphically, it is reminiscent of more classic role playing games and the very generous system requirements reflect this.

The story in Avadon seems very simple at a glance and may remind some players of some plot elements found in some of the more mainstream role playing games, like Mass Effect. In fact, the your character and some companions also share in a status very similar to that of a Specters in the Mass Effect universe.

The player character is known as a hand, which basically has the power to do as he or she sees fit in a certain situation and can ignore the law if needed. Hands are sent in to do the work of other characters who have ranks that are also named after other body parts. 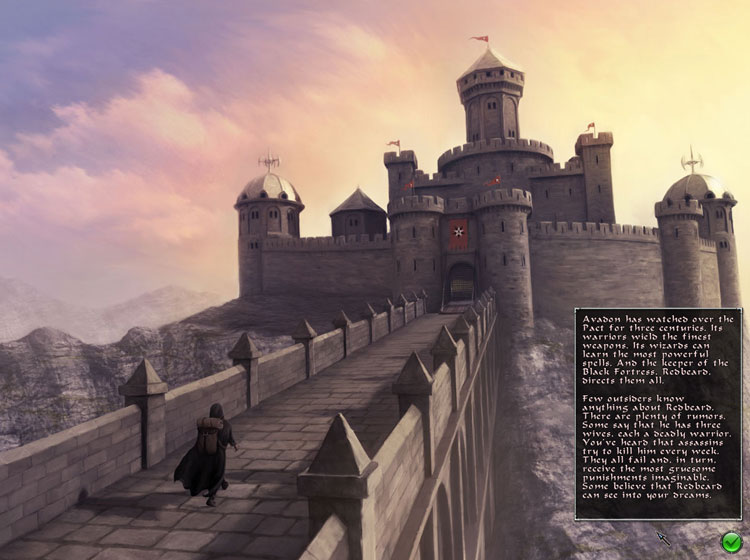 Like any role playing game, the first mission/job/quest will have you exploring somewhere close to where you started and killing monsters that are so beneath you that it feels anti-heroic. In fact, the entire first mission is a role playing game trope, with you exploring a dungeon full of rats and only having to fight a slightly tougher foe towards the end. However the story does build up from this and it does lead to an interesting plot element, but, I ultimately found it too full of itself to take seriously.

The story itself is told though text, and lots of it. The story isn’t told by much other means than through it. It often feels like you’re walking from one chapter to the next, with combat being thrown in to keep you occupied. For example, there is a quest where you have to save a farmers cow heard from being killed by goblin things, who have a base all the way over the other side of the map. Sure you can kill the goblins without talking to the farmer, but you don’t experience the story changing unless you explicitly talk to a character about that plot point.

I think that the story of this game will be engaging to some players and flat out boring to others, much like most stories actually. But I think it’s more likely to be disengaging because there is not really much effect, visually and eventfully, on the game world within the story if you ignore certain quests or complete certain quests other than some dialogue and quest rewards.

Avadon: The Black Fortress has a very classic look to it. The character sprites, tile-set and even the artwork are all very retro RPG in their design.

Lets talk a little about the character sprites shall we? Each class has it’s own sprite, one sprite, only one; that’s one unisex sprite per class. I wouldn’t mind it normally as the playable characters all keep to the gender of their classes, but some of the NPC’s, especially the ‘ShadowWalker’ class NPC’s, seem to use the same sprite, regardless of gender. I understand time constraints and the low budget of independently designed games, but it can really un-immerse the player from the story, which graphics are supposed to help convey.

The tile-sets are very two-dimensional (as are the characters) but that doesn’t mean that they aren’t undetailed. In fact, the most impressive looking things in this game are some of the tiles. Of course, there are exceptions to this rule, which can be found early on in the game. In a certain desert region, there will be lots of invariant sand. sure there are pathways and walls to mix it up, but it is largely invariant. 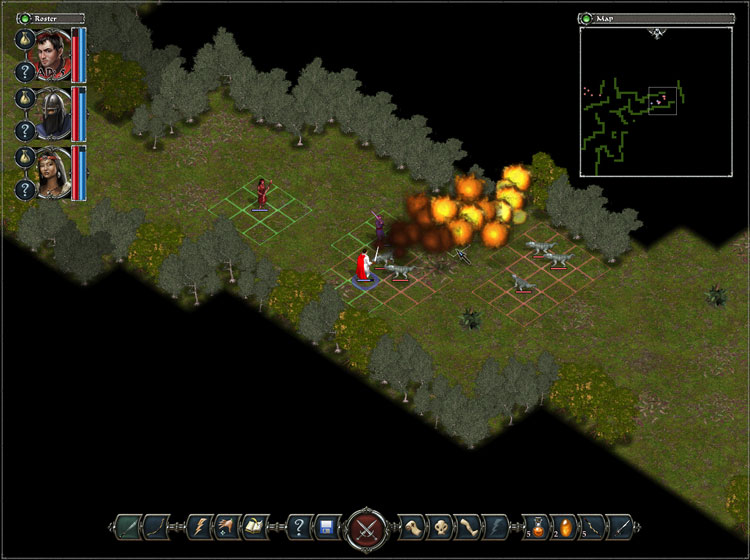 The artwork in this game is where it truly shines. The character portraits, the profile view of the character from the inventory screen, the map screens and anywhere else that the artwork comes through; are all kinds of pretty and awesome. The art team on this game have done an amazing job of realising the characters classes and portraits, as well as also making them incredibly nice to look at. The art is probably the strongest asset in this game, and it is very well executed.

Audio, sound, music; it is all very largely forgettable in this game. I mean, the sounds aren’t bad or anything, but they’re also not good either. They do their job, but they do it at the cost of interest, which is what they really need to be generating in a role playing game. And having a memorable theme in a memorable area would help solidify some interest, as well as help people remember what that obscure role playing game was back in the day. Do you think The Legend of Zelda would have been as memorable as it is today had it not had the overworld theme? Probably not.

Again, the music is largely forgettable and I found myself relying heavily on Windows Media Player to get me through the game. Each area actually didn’t have any or very little music in them, so it was pretty quiet. The only place that seemed to have music was the title screen and menus. A wasted opportunity to make your game memorable developers! I know that it may sound pretty pedantic, but, music always helps a performance and can sometimes carry it. Would The Dark Knight have been as great without it’s surreal ambient themes? Probably not. And what of Daft Punks score to Tron Legacy? Would the movie have felt the same with a generic symphonic piece instead? Probably not. 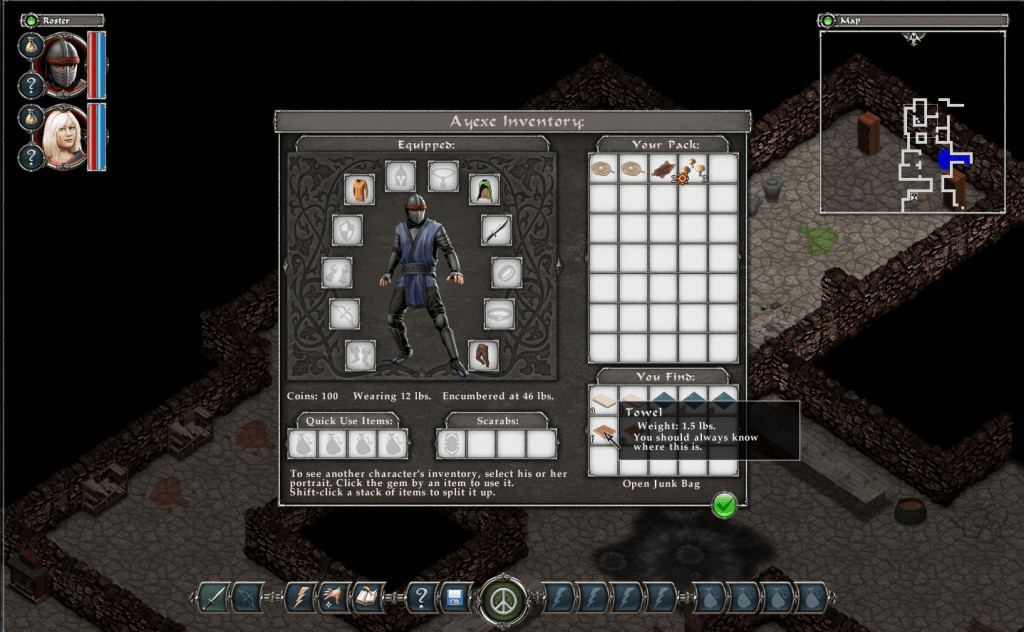 The sound effects in the game are pretty basic effects. They certainly sound similar to what would be happening in the game, but they were pretty underwhelming to me personally.

Again, I understand the limited budget of an independent developer and I can see how this would impact the quality of the audio, but on saying that, some home-made Foley effects with a gaming microphone would have recorded almost as well as a small recording booth, especially if you have the right audio drivers and codecs installed.

Gameplay wise, Avadon is somewhat strong. Not quite as strong as the art, but still, at least halfway up there. This is where the game very closely follows classic role playing game mechanics.

Much like the more classic title, it is a point and click style game, where you click on a visible area to move there and your character will begin to walk to that area, stopping only when combat is engaged. Walking to an area doesn’t take very long and if you’ve already been somewhere, you can move your screen to that location and have your character walk there from anywhere else in that section of the game. 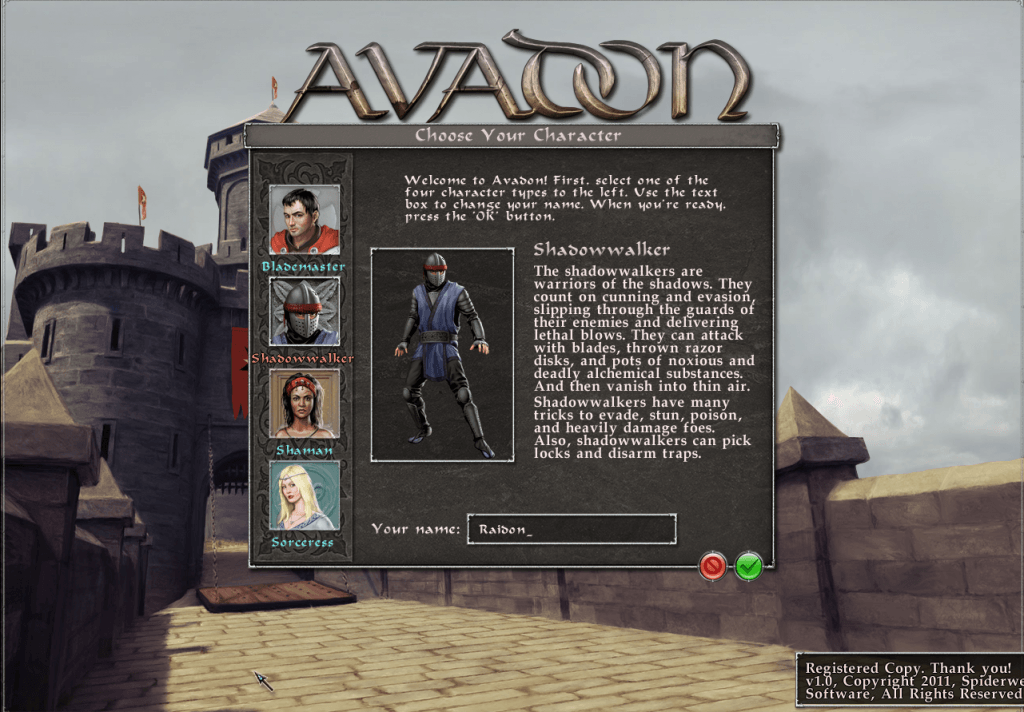 Combat is triggered when your character moves into a certain range of an enemy unit and it can see them. The combat in the game is turn based and anyone who has played dungeons and dragons will have a pretty close idea as to what the combat feels like turn wise. Of course, each class has it’s own skill tree that can only be climbed as you level and these skills become available in combat. Some of them are quite deadly, while others make your combat party larger by summoning pets and the like.

As you level, you get to increase your stats and skills. I found that it is best to build the one stat that your class is good with, as opposed to trying to even out all the stats. I found that it made it much easier to take enemies out as they were always going down in close to one hit, as opposed to being able to stack on me while I did bugger all damage and then being killed. 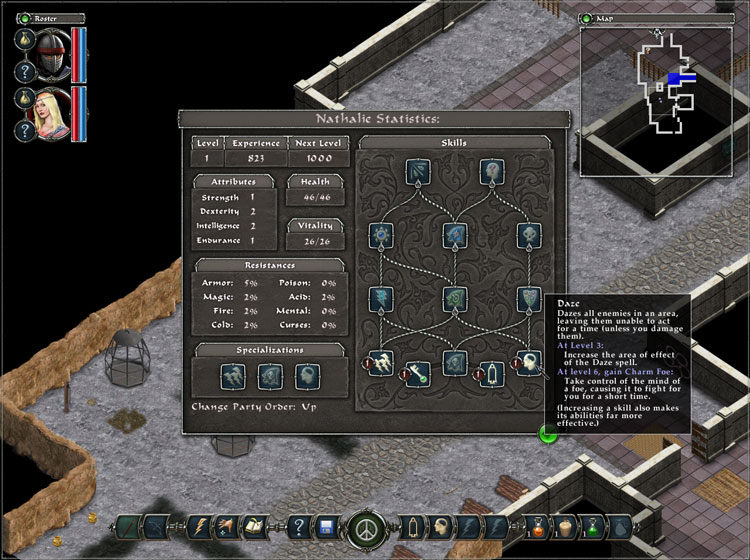 Clicking on an NPC will take you to their dialogue, which, if its an important character, will allow you to read into their lives story and also any quests they might offer you. The one complaint that I have with quests is that the quests didn’t update to tell you to hand them in immediately after completing a major objective, so you must pay very close attention to what it is that you are doing, or else you might find yourself walking around in circles. It seems that the triggers for these quests are placed at various points, rather than at the completion of certain tasks.

Avadon: The Black Fortress is a very decent role playing game by a pretty decent independent studio. The game has it’s flaws, but then again, so do some really big AAA titles. The game will definitely appeal to the hardcore fans of classic styled role playing games, as well as gamers who were born too late for the era but would like to take a glimpse at the past while still remaining in the present. The game also works for Windows 7, which is a definite step up from some of those older games.