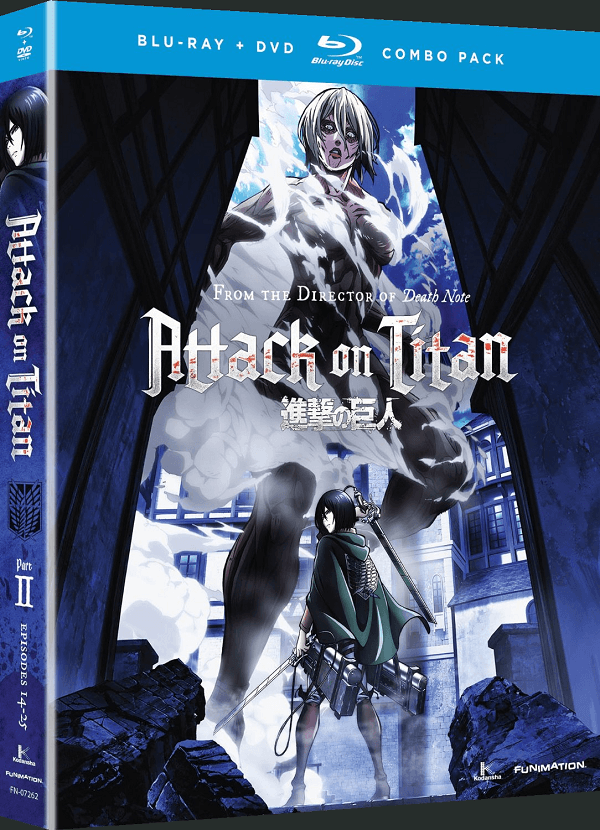 Overview
Few television series manage to reach an audience beyond the standard target demographic and even fewer of these series happen to be anime. While some anime have been fairly popular in recent years, only a few of these featured as dark of a story as Attack on Titan’s. Perhaps it is thanks to its dark story and cruel world fraught with danger and death that has led to Attack on Titan’s popularity, but regardless of its popularity the first half of the series served as a strong introduction to the world whilst featuring more death and questions than answers. Will things continue this way throughout the second half of Attack on Titan?

Story
This is a warning for those who have not watched the first half of Attack on Titan. There will be spoilers in this review regarding some of the events that unfold in the first thirteen episodes of the series so if you do not wish to be spoiled on specific events, stop now.

When we last saw Eren Jaeger, he was being held prisoner after successfully assisting in the defense of Trost by blocking the Titan entry point. Although this was humanity’s first real victory over the Titans and the fact that Eren played an essential role in putting a stop to the Titan onslaught, the rest of the military and higher ups are still unsure of what his motives might be and whether or not he is capable of controlling his newfound Titan transformation. 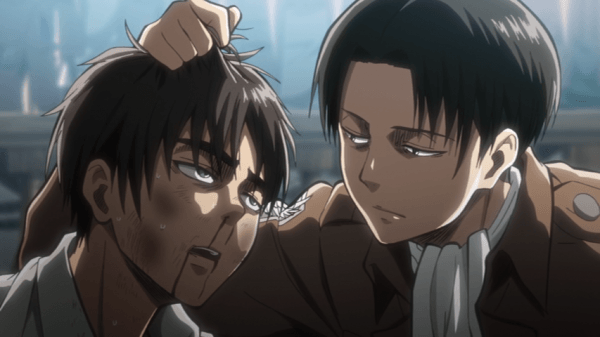 Thanks to some political maneuvering, Eren is saved from execution and placed under the jurisdiction of the Scout squad, led by Levi, who is ordered to kill Eren if he shows even a hint of losing control. After spending some time with the high-ranking members of the Scout squadron and a number of valuable specimens are slain by an unknown assailant, many of the main members of the 104th Trainees Squad, including Mikasa and Armin, join with the Scouts after witnessing the horrors that are the Titans and living to fight another day.

Once things begin to settle down, the Scout Regiment sets out beyond the wall in order to try and recapture Wall Maria with the help of Eren’s titan abilities and prove that he can be a useful tool for humanity’s survival and not a ticking time bomb that could go off at any moment. With the scouts established in a formation that has proved effective in fending off Titans while reducing casualties, everything seems to be going alright until a force that the group could not possibly plan for appears. 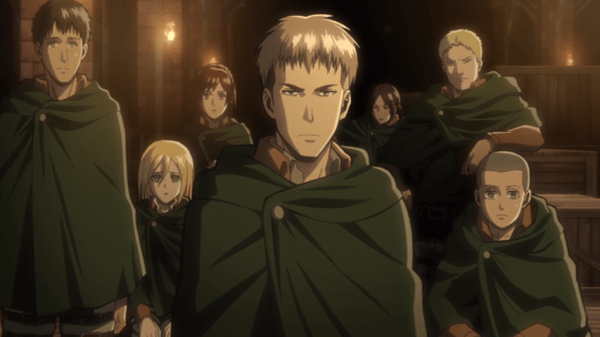 Whereas the first half of Attack on Titan had plenty of action and suffering that was broken up by time skips and flashbacks, almost the entire second half of Attack on Titan is spent tackling one specific mystery that comes to the forefront shortly after Eren joins Levi’s squad. While there are still pacing issues in this second half, the tighter focus is beneficial to the series’ progression and allows viewers to learn more about some of the newer cast members right at the start rather than in the middle of the action.

Because of the setting change in the second half, the planning that goes into the Scout Regiment’s survival will please those with strategic minds but the fact that it so quickly becomes obsolete only serves to drive home the fact that no plan survives contact with an enemy, especially ones that are nearly invincible and see humans as nothing more than food. As such the danger of the Titan’s is just as much as before, since not only are many familiar faces in danger of dying, but the new ones we have spent the last few episodes with are as well. That being said, it is disappointing that the actual character development in Attack on Titan seems to only be used as a tool to make viewers care about a character just enough to worry about their safety and not actually delve into their past in any meaningful way or show signs of growth. 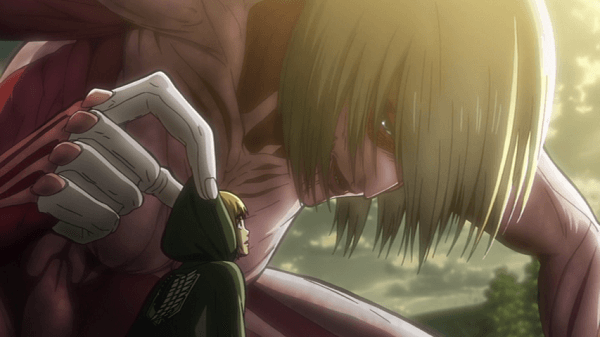 The mysteries that run rampant throughout Attack on Titan continue to pile up in the second half of the series and unlike the first half, practically none of the mysteries, both new and old, are answered. While this series is obviously a long running one, it is evident thanks to recaps upwards of five minutes long in later episodes as well as the fact that Armin serves as a sounding tool to explain various plans that the viewer should have figured out at that point, that many moments throughout this second half were used to drag out the first season so it could end on a striking and memorable moment without answering much.

The continuing of the pacing issues do little to actually harm the fact that Attack on Titan continues to be one of the bloodiest action packed anime in recent years. After the breather viewers are given at the beginning, the amount of violence that occurs throughout the second half is practically endless and it is filled with moments of dread and trauma that tears away at a characters’ psyche. Perhaps the most striking moment to me in the entire second half comes in the form of a chilling and unforgettable moment where the memories of a comrade must be sacrificed in order to survive, especially once the emotional dagger is twisted minutes later, proving that although Attack on Titan may be a series full of mysteries and death, the emotional element is a key aspect to the series’ success.

Visuals
Fighting amongst the buildings of Trost might have been a great start to the series, but the transition to the open field and the forest of giant trees not only keeps the scenery fresh but also introduces new aspects into humanities’ fight against the Titans and the tactics that they use. Although the concept of the ODM gear remains the same, the way that it is used throughout the second half keeps the action exciting, especially since some amazing looking animation techniques, including slo-mo circling camera angles, highlight it in the best way possible. 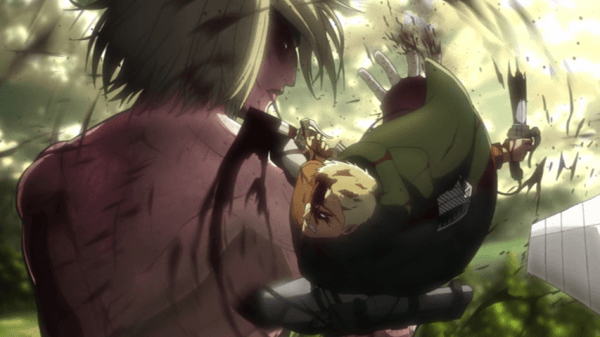 The new characters are all designed memorably enough and surprisingly the amount of actual gore in the second half seems to drop a bit compared to the first half. The designs of the Titans remain rather ludicrous with humorous looking animations while Eren’s Titan form and their new opponent feature very detailed bodies and well-choreographed fight scenes that benefit from fluid animation.

Audio
The English voice actors from the first half of the series reprise their roles in the second half with Bryce Papenbrook fitting Eren’s character nicely while the newly introduced characters are voiced well as their actors settle into their roles, with Levi’s voice actor Matthew Mercer standing out amongst the new additions.

Very few anime series manage to make use of their background soundtrack in any significant way. However Attack on Titan makes use of numerous pieces of background music featuring vocals that really bring out the emotions of the moment, though it would have been nice if these vocals were given some form of translation. 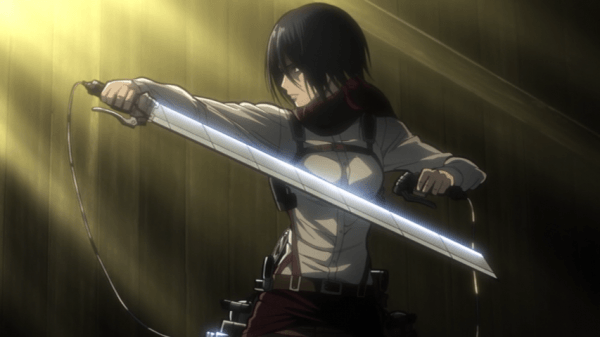 The second half also features a brand new opening and ending theme and while it may be hard for many to move past the first half’s iconic opening theme, “Jiyuu no Tsubasa” by the same band, Linked Horizon, is just as fitting and fast paced as the first one, making it a suitable replacement. The ending theme, “Great Escape” by Cinema Staff works well as a closing theme and is actually better than the first ending theme for the series.

Extras
With the release of Attack on Titan Part 2, FUNimation has included a number of their standard extras and a few noteworthy bonuses. There is a clean version of the opening and ending theme, trailers for other series as well as Attack on Titan, a gallery of the mid-episode eye catches that feature translated text, as well as a sixteen minute feature called “Attack on Titan Expo” from 2013 which features footage from the event as well as interviews with some of the Japanese staff. 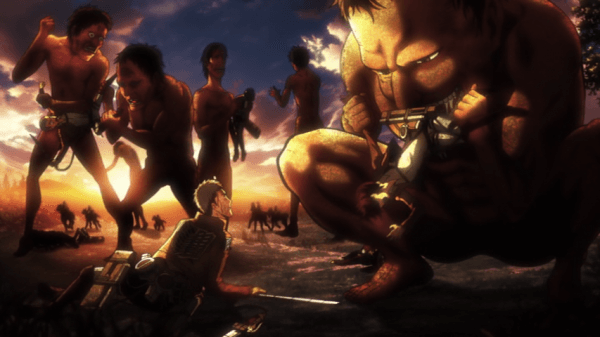 Forty seven minutes of “Chibi Theatre: Fly, Cadets, Fly!” is also on the Blu-ray version of the disc which features comedic shorts from the training school presented in chibi format which are unfortunately presented in Japanese only. Finally there are two commentary tracks that do contain spoilers, the first being for episode 14 featuring Mike McFarland, the ADR director and voice of Jean, Jay Michael Tatum who is the lead adaptive writer and the voice of Erwin, and Matthew Mercer who voices Levi, while the second is for episode 25 and features Bryce Papenbrook, the voice of Eren Jaeger, Lauren Landa, the voice of Annie, and Mike McFarland once again.

Overall
Attack on Titan Part 2 manages to accomplish a monumental feat by being better than the first half of the series. While there are still issues with the pacing, minimal character development, and the dragging out events; the change in scenery and the tighter focus of the story manages to deliver an action packed experience that thrives off of fluid animation while also giving viewers memorable and emotional moments as they witness what lengths humanity must go through simply to survive. With such a great story full that is full of mysteries that are still unanswered, the second season can’t come fast enough.