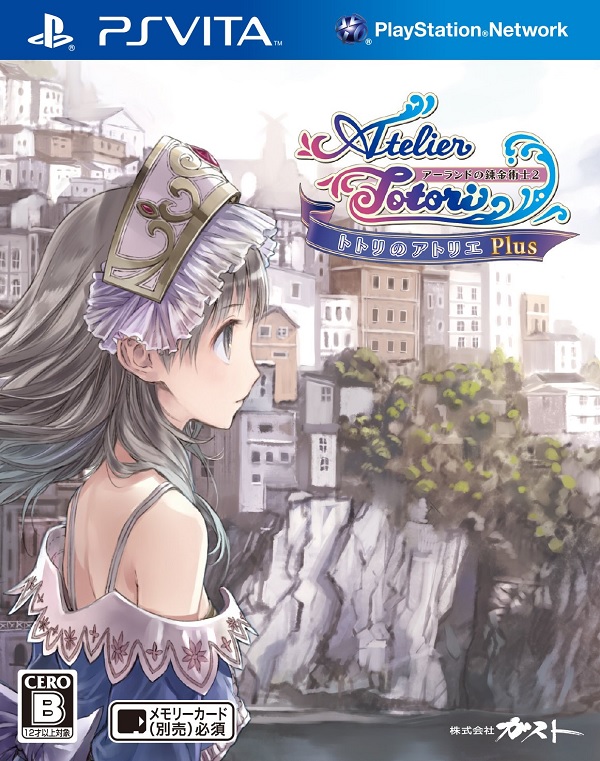 Overview:
Since the PlayStation Vita was released last year, it has proven to be quite a capable handheld at times. So capable in fact, that a number of developers have begun releasing ports of their console titles onto the handheld. Tecmo Koei has been leading the charge with these “Plus” versions, with Dead or Alive 5 Plus hitting stores a bit ago and now, rather silently, Atelier Totori Plus. Has this gorgeous looking PlayStation 3 RPG managed to make the jump to the Vita without suffering a drop in quality?

Story:
The release of Atelier Totori Plus may seem a  bit strange at first thanks to the fact that it actually is the second game in the Arland trilogy. However those jumping into the title should not worry too much about any continuity issues, thanks to the fact that while Rorona is in the game the storylines of the two titles are not connected in such a way that players will be left out.

That being said, it is worth noting that those who played the original Atelier Totori will find that the storyline for Atelier Totori Plus has gone entirely unchanged. This is great thanks to the quality of the story and the characters, however it is worth noting that outside of the DLC character introductions and events and the DLC dungeons, the storyline has not been given a major overhaul. 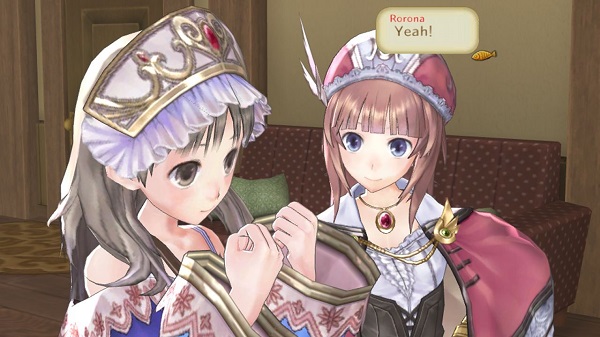 Anyways, for those new to the game, the story of Atelier Totori Plus follows a girl named Totooria Helmond who is the daughter of a famous adventurer. Totori, as she is called by her friends, has been working as an alchemist studying under Rorona in the hopes that she too can become an adventurer just like her mother before her. However Totori is trying to do more than simply live up to her mother’s name, she is also trying to find out what happened to her mother after she vanished years ago.

Like all games in the Arland series, Totori Plus features your standard three year schedule where players are given a limited amount of time to reach specific goals or they will fail. Unlike the most recent Atelier title, Atelier Ayesha, these numerous checkpoints that occur throughout the game itself help keep the player focused on the storyline a bit more and provide a sense of urgency. However while the time limit certainly can be a factor, it isn’t suffocating enough to limit player exploration and force players to feel like they have to reign themselves in.

As for the story itself, despite featuring a girl trying to track down her mother, Totori Plus sports a very light-hearted storyline that still strikes an emotional chord thanks to the fact that Totori is trying to track down her missing family member, which is something Atelier Meruru, a later game in the series, was lacking. A goal that went beyond the simple physical nature of keeping your shop or skipping out on being royalty. 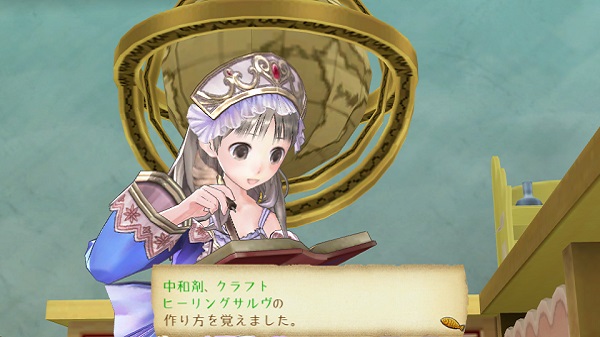 Anyways, as I mentioned the story can be very light-hearted and is chock-full of comedic moments where most players will be struggling not to laugh here and there. Also while the story may still lose it’s focus here and there, Totori’s charming cast of characters, which has been expanded a bit more on this release thanks to DLC characters joining the group rather than simply just talking to them at towns, helps keep the story interesting.

While there isn’t too much new for returning players, newcomers will find a charming, light-hearted storyline with plenty of comedy and a great cast of characters that you can’t help but adore. Sure the time-limit may be problematic for some, it’s more than tolerable and with plenty of different endings, including character endings and a “True Ending” Atelier Totori Plus has plenty to offer those who are looking for multiple playthroughs.

Visuals:
Thanks to the art style and design of Atelier Totori, the game was never a massive drain on the PlayStation 3’s resources and that makes it perfect for the Vita’s lesser capabilities. In fact, it is such a perfect fit that the game, at times, looks better on the Vita’s smaller screen than it did on the PlayStation 3. It is worth noting that occasionally characters can appear a bit rough around the edges, but this occurs rarely. 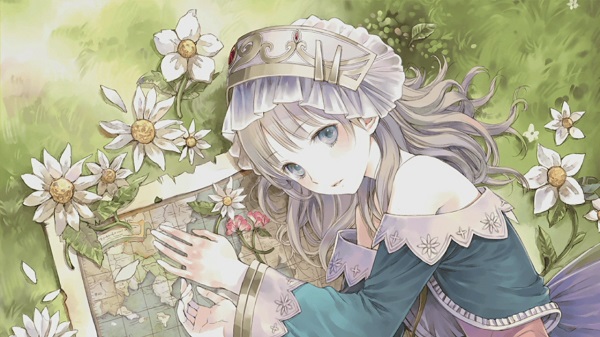 As for the art style itself, Totori sports highly detailed, hand drawn character portraits that appear during most dialogue scenes as well as a number of event scenes that are also hand drawn. The main game features a soft color palette and well-designed character models and enemies to battle against.

Audio:
Thanks to how vocal fans were about the lack of a Japanese voice track in Atelier Ayesha it seems that Tecmo Koei has chosen to rectify that issue by including both the English voice track and the Japanese one. While this does make for a very large download, longtime fans and newcomers will appreciate the options. It is worth noting that the English dub remains the same one recorded by NIS America for the PS3 release of Totori so the dub continues to impress. 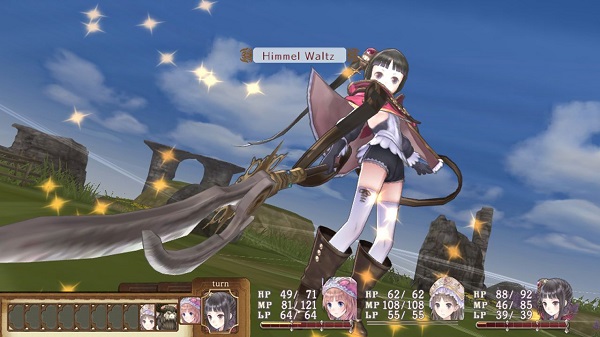 As for the soundtrack itself, the game sports an amazing set of background music on its own, but thanks to this being the “Plus” version of Atelier Totori, players can switch out all of the theme songs in Totori with music from past games in the series, including ones never released in North America. This is a nice little treat and allows for gamers to keep things fresh when they grow tired of a specific set of background music or want to listen to something different for a separate playthrough.

Gameplay:
Atelier Totori Plus is practically a carbon copy from the original PlayStation 3 release of Atelier Totori when it comes to gameplay, which is quite impressive given the nature of the game. The Vita’s touch controls are non-existent for the most part, outside of being able to scroll through the world map via the front touch screen, but even here players will find that simply using the analog sticks is a better alternative.

As mentioned before, players are limited in time and because of this, everything the player does in the game requires some sort of time passage. This includes everything from traveling to a new area, synthesizing items together with alchemy, harvesting ingredients and even fighting enemies. Everything passes time and because of this, time management plays a big role in the game, but as mentioned earlier, it isn’t too overbearing. 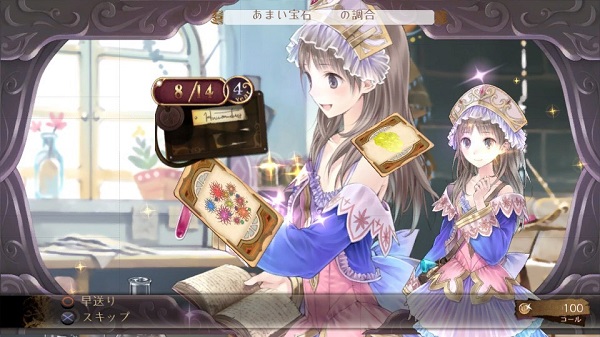 This passage of time also affects the various alchemical ingredients you carry as well, meaning that the longer you carry certain ingredients around with you, the lower their quality will be. This means that even if you obtain an S rank item, it may eventually degrade to E quality if enough time passes. Also, since Totori subscribes to an older version of alchemy, players are able to pick and choose which type of item traits they want to apply to created items, meaning there is much more depth here than what can be found in Ayesha.

As for the game’s combat system, it has remained unchanged with players able to take three fighters into combat at one time, though the limitations in combat are rather glaring in Totori now that multiple games in the Atelier title have been released since. Players still have the ability to assist allies by blocking incoming damage or following up on an attack and everything works on a turn based system so nothing truly has changed there. 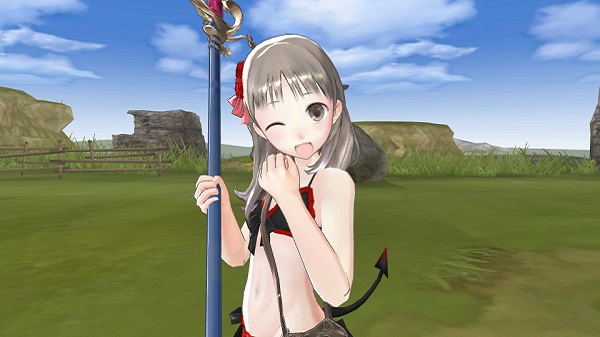 Considering Atelier Totori Plus sports all of the DLC from the PS3 version, there are three new party members that can be added to the group eventually and a new, very difficult, area has been added to the post-game. Also available in Totori Plus are a number of costumes that players can change Totori into as they create them in the game. A number of these outfits do step into the realm of fan-service and given Totori’s slender build some may find issue, however those outfits can simply be ignored and are not forced on the player in any way, meaning it is there for those who enjoy it, and not for those who do not.