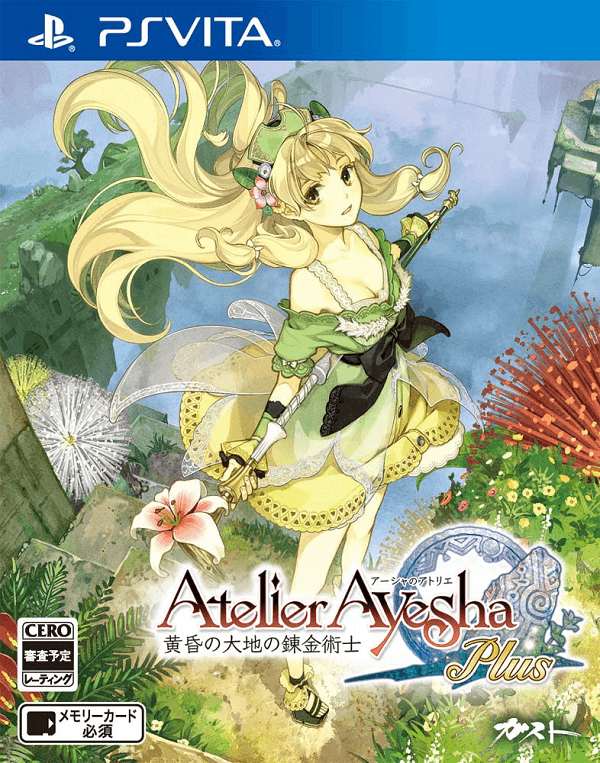 Overview
After exploring the lands of Arland for three titles, Koei Tecmo introduced fans of the series to a new land, new set of characters, and a change-up to many mechanics when they transitioned into the Dusk series with Atelier Ayesha: The Alchemist of Dusk. While this change may have been interesting in a few ways, each step forward was met with a step back that led to Ayesha being one of the weakest recent titles in the series. Now that Atelier Ayesha Plus: The Alchemist of Dusk has been released; is the title better than the original?

Story
With Atelier Ayesha Plus the story moves away from the somewhat familiar lands of Arland into a new area where knowledge of true alchemy is all but forgotten and the people live in a land littered with the ruins of a once advanced civilization that fell long ago. Ayesha Altugle, a young girl working as an apothecary, lives near one of these ruins and lives alone after her sister, Nio, vanished years three prior and her grandfather’s death. 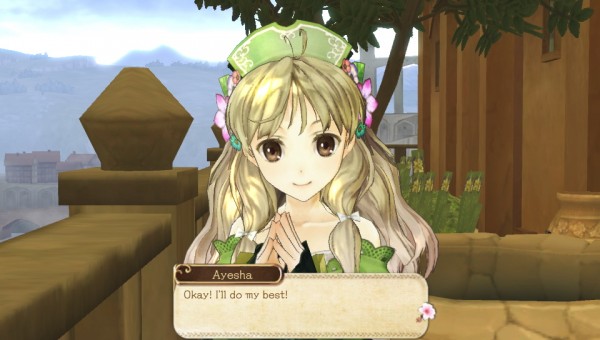 She manages to make a living out of harvesting medicinal herbs and creating medicine with her limited knowledge. That is until one day when going out to visit her sister’s grave, she witnesses evidence that her deceased sister might still be alive somewhere and after being informed by a strange man that the secret to Nio’s location depends on finding the meaning of the flowers around the grave and the only way to do that is to learn real Alchemy. With hope that her sister is alive, Ayesha begins her journey to save Nio.

As with past games, Atelier Ayesha Plus features a time limit of three years before the story ends and in this time players must try and balance how much time they spend exploring, synthesizing items, fighting enemies, completing quests, and actually progressing with the storyline since there are numerous endings that can be obtained in Atelier Ayesha Plus. Many of these endings require specific events to be completed or even saving Nio before the time limit runs out, meaning that there is plenty of replay value to be had thanks to the way that the time system keeps a limit on what players can do. 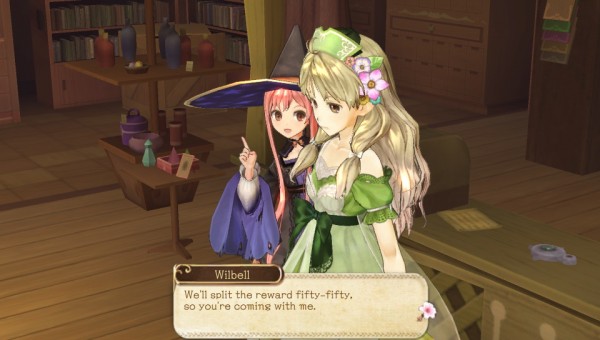 That being said, the time limit remains fairly lenient this time around as, unlike past games that required specific goals to be met at certain times or fail, in Atelier Ayesha Plus there is no imposed limitation which does lower the amount of urgency the player has in actually completing the main quest.

Thankfully, the base storyline of Atelier Ayesha Plus is rather enjoyable thanks to an enjoyable cast of characters, a couple of which appear in the rest of the Dusk trilogy. Unfortunately few of the characters that do end up as part of the story this time around are rather bland which is disappointing considering Gust’s track record. That being said, while the whole cast isn’t quite as strong as past games, Ayesha makes for a delightful lead. Ayesha’s journey is an emotional one and watching her interact and make friends with those she meets along the way makes for an enjoyable experience that players won’t mind visiting again.

Gameplay
Now as I mentioned earlier, a lot of changes were made to various mechanics in Atelier Ayesha. Though the key aspects of fighting, exploring, and alchemy remained the same, almost every part of these aspects have been changed and they remain that way in Atelier Ayesha Plus. This will be a disappointment to some as Atelier Ayesha saw the introduction of a streamlined form of alchemy that removed a number of the more complex elements from the system. 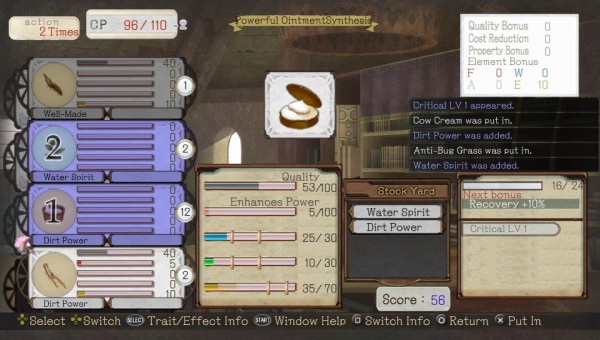 In previous games, traits for created items were taken from the ingredients used to create them meaning that rare items could potentially give the player a unique skill but now all traits are applied automatically depending on the quality of the items used. While this is a good way to make alchemy easier for players to understand and lowers the difficulty of creating specific items, it does feel like the streamlining has lost something in the process.

Exploration and gathering materials remains pretty much the same as fans of the series will remember as they travel to various places and find harvest points. Though considering everything takes time, players will need to be careful about exploring too far or spending too long gathering items at one spot as days can tick past extremely fast if you don’t keep a close eye on how you manage your time. Thankfully Ayesha Plus does offer the choice of swapping party members at almost any time which does lower the time it used to take to swap members. 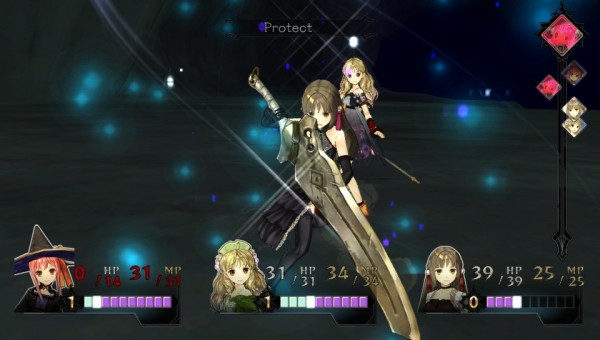 Combat is another aspect that has been modified with Atelier Ayesha as players will now be able to move around the field a bit and this remains true in Atelier Ayesha Plus. Once battle begins players will be able to move and attack from various angles which adds an extra layer of strategy to how these battles unfold as attacking from the back or targeting an enemy’s weak point will deal extra damage. It is worth noting that support attacks can only be performed by characters close to one another and considering how far players will sometimes venture out, it is important to make sure your positioning is for the best as even simple encounters can turn into dangerous battles.

Being an enhanced release, Atelier Ayesha Plus features a number of new additions as well as all of the DLC from the original release. One thing that is noticeable is that ingredients seem to be more plentiful in this release and that there are tons of new missions, bosses, and dungeons to explore later in the game. This adds something extra for returning players and nice challenges to tackle if you happen to have spare time on your hands thanks to proper time management.

Visuals
Atelier Ayesha Plus has managed to make the transition to the PlayStation Vita relatively unscarred. The character models are still presented in beautiful detail and the designs of the environments remain impressive. This is good as the game has unfortunately opted to switch from the standard character portraits found in past Atelier titles to using only the 3D character models which, while nicely detailed, are nothing compared to how the gorgeous the character portraits used to be. 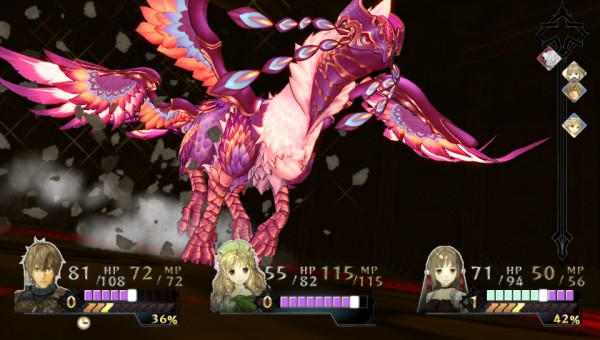 One thing that is noticeable however is that, while combat and the various special effects from attacks are still presented nicely, is the amount of slowdown that this Vita release has. Atelier Ayesha Plus often finds itself slowing down whenever anything too complicated happens in battle or even while exploring a field. While this was an issue in the original release, the frame rate issues seem to have grown in Atelier Ayesha Plus.

Audio
Now back when Atelier Ayesha was originally released on the PlayStation 3, Koei Tecmo made the odd decision to not include the original Japanese voice track in the game. Thankfully in Atelier Ayesha Plus, that voice track is included and while many gamers may prefer the English dub, it does give returning fans a little something extra to look forward to. Especially since, comparing the two versions, a large number of scenes now contain Japanese voice work where the English counterpart had none, meaning that while both versions are serviceable, those who want a title with more voiced dialogue will opt for the Japanese track. 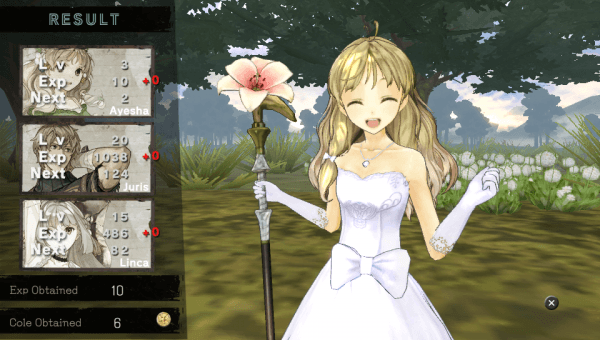 As far as the background music is concerned, that is where the Atelier series has always shined and it continues to do so in Atelier Ayesha Plus. Gust has provided an amazing soundtrack for Ayesha Plus, making it one of the best in the entire series as there are fitting tracks for nearly every situation, whether it is simple calm exploration or intense battles.

Overall
Atelier Ayesha Plus: The Alchemist of Dusk is an improvement over the original title released back in 2013 but only slightly. While the new additions to the game are a nice way to add some spice to the release and the addition of the previously missing Japanese voice track is a good touch, most of Atelier Ayesha Plus’ changes are simple at best compared to the original. Thanks to the way that the streamlined mechanics work, newcomers will find that Atelier Ayesha Plus will be the easiest and best way to jump into the game even if it remains one of the weaker recent titles in the series.