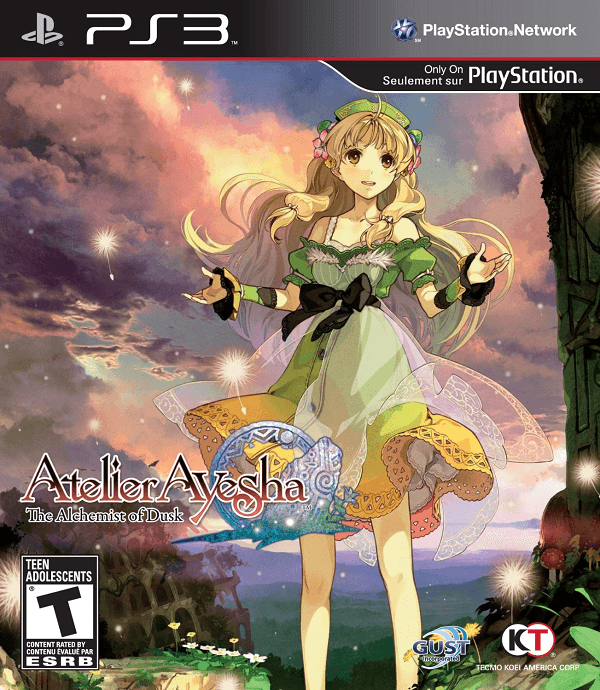 Overview:
There is something to be said for remaining the same and working towards your strengths while refining your weaknesses and over the last few years, the Atelier franchise has done just that. With the Arland Trilogy coming to an end, Gust has moved on to create a new series of Atelier titles, the first of which being Atelier Ayesha: Alchemist of Dusk. Now with a new publisher and a few design changes from the Arland Trilogy, does Ayesha deserve her own time in the spotlight and more recognition than its publisher wishes to give it?

Story:
Unlike past games in the franchise where the vibrant world of Arland thrived around the player and everything seemed fine, Ayesha’s homeland is in decay. The land is barely providing enough for people to live on and the art of alchemy seems to have been lost forever. In this land a girl named Ayesha works as an apothecary, living alone near the ruins of an advanced building where various medicinal herbs grow. 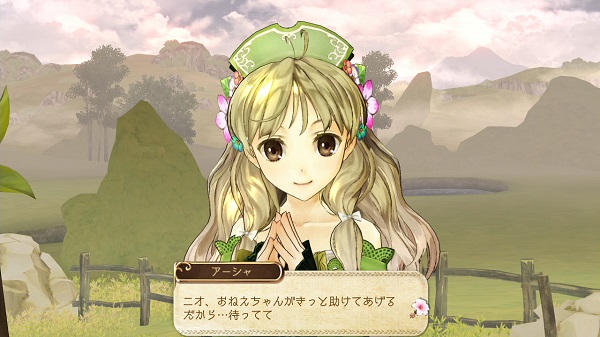 However Ayesha’s life wasn’t always so lonely. Just three years before she lived with her younger sister Nio. But one day when Nio ventured into those same ruins she mysteriously disappeared. Long thought dead, Ayesha visits her sister’s grave often. However during one such visit, Ayesha is suddenly presented with evidence that her sister is still alive somewhere and the only way to rescue her is to discover the meaning behind a certain flower and research true Alchemy. With hope that she can save her long lost sister, Ayesha embarks on a venture with little to no knowledge of where to start.

The storyline for Atelier Ayesha isn’t as strict as past titles in the franchise. While players are still presented with a three year time limit, various events that take place throughout the story are not limited on how many days have passed, such as reaching a certain alchemist rank or level of kingdom prosperity. 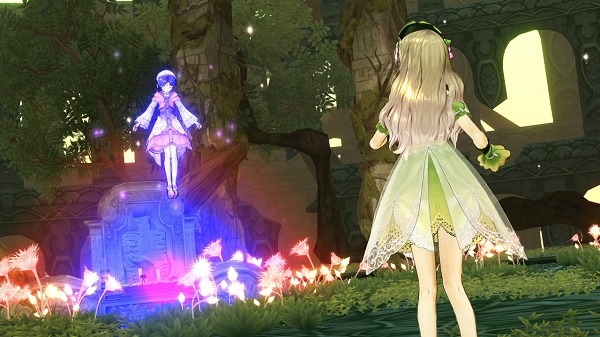 This means that outside of focusing on the main storyline, players have the ability to venture more than before as they are not held to such a strict timeline as before. And adventure you will do as mentioned earlier, Ayesha begins her mission with barely any direction and players are usually only directed on where to go via notebook updates. These vague updates can be problematic since, while the time-frame isn’t as strict, losing track of where to go next is an issue.

Although the stricter time limit allows the player more freedom, it does make it so that the story does feel less important. This can be rather disappointing at times as past Atelier games had players always watching the calendar for fear of passing up specific events or running out of time. When the player does manage to focus on the story however, they are presented with an interesting journey with a clear-cut finish line that is accented with a great cast of characters. 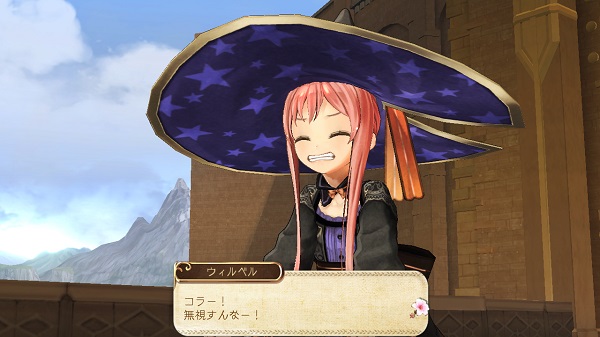 Ayesha may begin her journey alone but she quickly finds new friends and allies along the way that wish to assist her in various ways. Your party members tend to be very likable and each one has an interesting enough personality, though one old man is simply frustrating and a bother to deal with. As Ayesha makes progress on her journey she will interact with her friends in various ways that actually feel believable and this helps keep players focused on the task at hand. You see, while saving Ayesha’s sister is the final objective, watching Ayesha and her friends interact with one another and unveil more of the world’s secrets is the true gem of Atelier Ayesha’s story.

Visuals:
One thing gamers may immediately notice is that Atelier Ayesha feature a more subdued color palette than past titles. While still very colorful, the colors are more earthy and natural and this helps accent the overall aesthetic of Ayesha. With beautifully detailed character models and impressive environment work, the world and characters of Ayesha have never looked better. 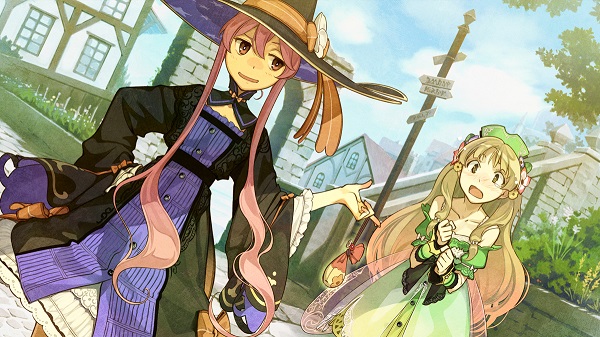 However it is worth noting that there are a few issues with the game’s graphics. One of which is due to the fact that there are no longer character portraits during dialogue sequences. Instead any talking is done with the 3D character models, which works since they are still well designed, but the developers chose to not sync the mouth flaps of the characters with the dialogue. In fact, a speaking character’s mouth will move indefinitely until the player advances the dialogue.

As for the game’s battles, the character animations and enemy animations are well handled and since the battle system has been improved from what was offered in the Arland series. It is also worth noting that the game does have some frame-rate issues which rear their ugly head in complicated environments and when some of the visually impressive attack sequences are used on a group of enemies.

Audio:
In what many have called an odd decision, Tecmo Koei has chosen to forgo including the game’s original Japanese voice track. While not much of an issue for those who prefer listening to the English voice work anyways, it is a disappointing removal for fans and an unfortunate one considering Atelier Ayesha’s voice work can be hit and miss. While most of the characters are voiced well enough, Ayesha’s voice actress seems like an odd fit for her character and her personality. It is also worth noting that while most of the game’s events are voiced, there are a decent number of events that are lacking voice work. 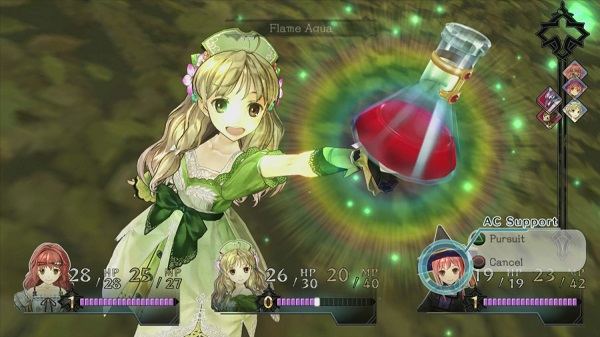 As far as the game’s soundtrack is concerned, Ayesha boasts a euphonious soundtrack. Perhaps the best in the franchise’s history in fact, as there are numerous tracks that, despite being a bit repetitive at times, always accents the game’s presentation by making great moments even better.

Gameplay:
The Atelier titles have always been about exploration, fighting and of course alchemy and Atelier Ayesha is no different. However it has received a number of changes to each aspect. First and foremost, a number of adjustments have been made to make Alchemy a bit easier to handle. One thing veterans of the series may remember is that players could always pick and choose which traits they could apply to any created item. 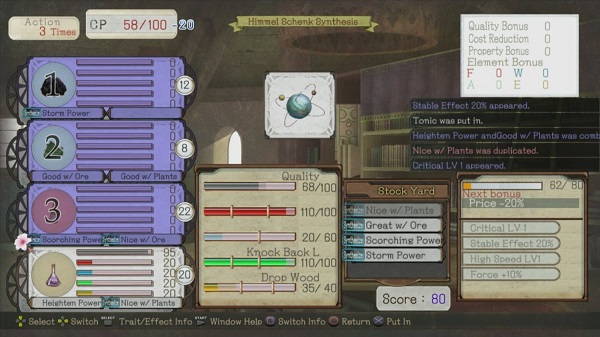 In Ayesha these traits are automatically applied depending on the quality of the items used to create it. This makes the system a bit easier as players no longer need to search for a specific ingredient with a rare trait to create an item, but it can be problematic. It is also interesting to note that creating items with alchemy no longer requires mana.

The exploration of Atelier Ayesha remains very similar to past titles. As players explore the world they will come across various towns where they can not only interact with their party members, buy items for alchemy and equipment for battle, but also accept various quests. It is worth noting that unlike job boards from past games, these quests are usually side-jobs that offer a cash reward and sometimes an item as a bonus. They are given time limits but there is no punishment for allowing a time limit to slip past you, nor do players have to focus on completing these quests, though they certainly offer great incentive to players who wish to complete them. 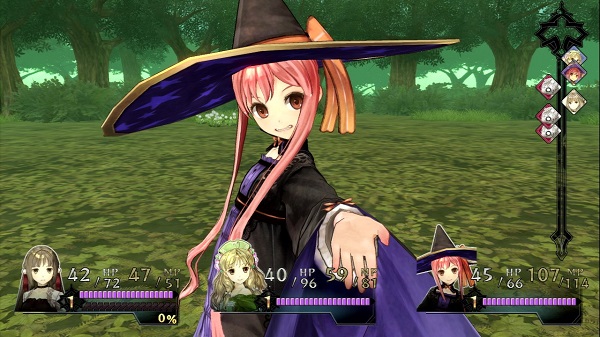 As for field exploration, the Ayesha continues to feature a world map where players spend a set amount of days traveling between each area. Exploration fields themselves continue to consist of monsters roaming around to fight against as well as harvest points. Harvesting has changed slightly in Ayesha, as your party members can actually help Ayesha acquire extra items while harvesting and some items can only be found by specific party members.

Whenever the player enters battle against an enemy they face off against them in turn-based combat. However unlike past games where enemies and allies stand in a line and hit one another, Ayesha’s combat system sees players and enemies spaced out on the battlefield. Players can now position themselves as they see fit once battle begins, though moving around the field does use up that character’s turn. 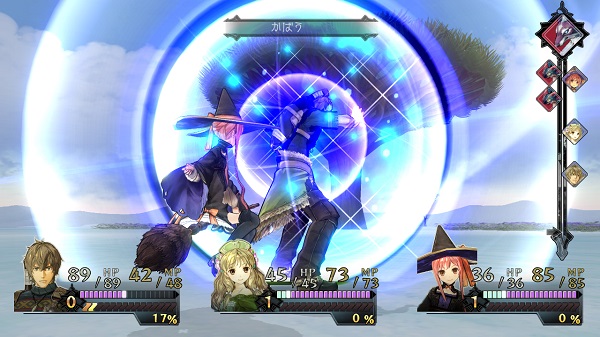 Being behind, near, or far from an enemy can offer various bonuses when attacking, though it is worth noting that allied attacks and defense can only be performed with allies near the attacking/defending character. These allied attacks can help position players to their advantage however, as back attacks and pursuit attacks automatically move the assisting character into position for extra damage. This allows players to strategize as they fight and since area of effect attacks now have to be aimed properly, positioning and resource management can sometimes mean life and death in combat, especially since players may end up far away from a town the further into the wild they explore. 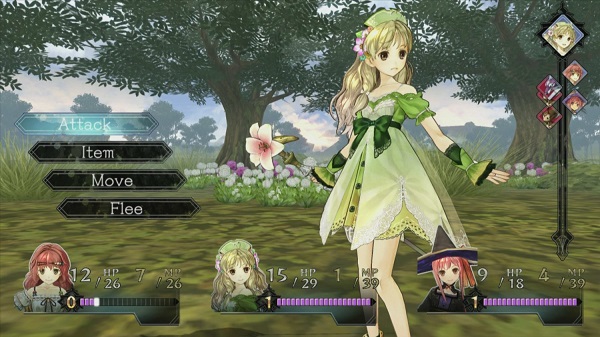 Since players have a three year time limit in Atelier Ayesha, it is worth noting that time management is still a very big deal. Every action you take, whether it is traveling between locations, harvesting items in a field, fighting enemies or alchemizing items, time passes by. While the story does seem easier to finish this time around within the three year time restraint, it is still a bit confining. However veterans should be familiar with the limit and it helps serve as a driving force to remain focused and on-task, though newcomers may find it a bit too limiting despite the longevity of the title and a New Game Plus option.

Overall:
Atelier Ayesha is a title that has always worked towards its strengths and Atelier Ayesha can be seen as the franchise taking two steps forwards, one step back. While offering a nice improvement to the combat system, a nice tone shift artistically accompanied by an amazing soundtrack, the streamlining of alchemy removes the creativity of the player and removing the various checkpoints players have to reach along the time frame lessen the urgency of the main storyline.

Pair that alongside a fairly average English dub and no Japanese voice track, and Atelier Ayesha: The Alchemist of Dusk is still an impressive entry in the series. However just like how in alchemy a few low quality ingredients can lower the rating of the highest quality recipe, Atelier Ayesha: The Alchemist of Dusk may bring a lot of improvements to the table that create a superb title but is marred with a few poor design choices that hold it back from being one of the best game’s in the franchise.