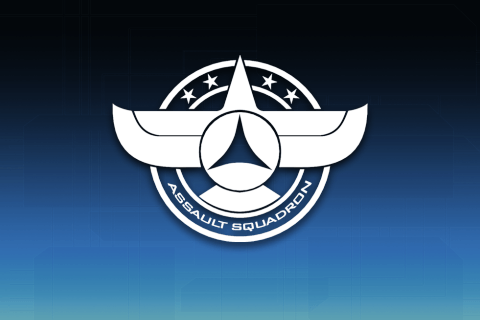 Assault Squadron
Company: Chillingo
Platform: iPhone (Reviewed), iPad
Release Date: May 29, 2010
Price: $2.99 –Buy Now!
Story:
When the world detects an unknown vessel suddenly appearing out of a worm hole in space, it begins to make its way towards Earth. Despite all efforts to contact said vessel, they were met with nothing but silence. That is until the vessel unleashed countless enemy craft that descended upon the planet and began destroying anything and everything in their path. But the world quickly turns to the Assault Squadron, elite pilots who are now tasked with saving the entire world.

This may be your classic science fiction storyline that is nearly as cookie cutter as they come. That is until you see the way that the story is presented; with a full CG cutscene before each of the six missions. If there is any fault to this game is that the eventual length of the game is short and the story reflects this.

Graphics & Sound:
Every cutscene that plays before a level shows advanced computer graphic design and every bit of it is stunning. They are as crisp as you can imagine playing on an iPhone/iTouch and may make you wonder what platform you are actually playing on. 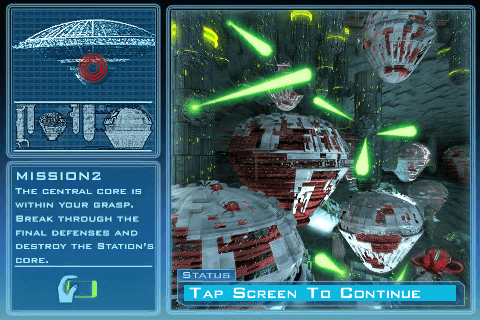 The developers boast a stunning 60 frames per second and I am quite quick to admit that there boasting is completely understandable. Not only do the cutscenes themselves run smoothly but every bit of the game feels completely polished. From the bullets your shooting and dodging to the ships flying around on the screen, you will not feel a single bit of slow down regardless of which generation of iPhone/iTouch you are playing on.

Plus there are certain levels that the game will orient itself between being a vertical scrolling shooter, to a side scrolling shooter which is a nice touch. You can see which version a level will be played as on the mission briefing screen. This is just a small feature but does help break up the standard scrolling monotony.

Not only that but Assault Squadron boasts a fully voiced narrator and mission briefer. The introduction cut scene and mission briefing feature the voice over that is quite effective with no subtitle backing, but it is not necessary as the voice is completely understandable. Couple this with completely believable explosions and a very well chose background music and it is a treat for the ears.

Gameplay:
As with any good Shoot ‘em Up (Shmup) you have the option to pick between three varying levels of difficulty when you start up your six level campaign. But with Assault Squadron, you picking more than just how many continues you have, you are also picking your own level of hell.

Some people reading this may recognize the term “Bullet Hell.” For those that don’t Bullet Hell is something akin to fighting an army with a pea shooter. On the harder difficulties the game throws countless enemy vessels against you and each of these is shooting at you trying to destroy you, in some cases literally filling the screen with bullets.

These bullets are entirely survivable however as your ship is equipped with shields which can take a certain amount of hits before being destroyed and you are forced to use a continue to avoid a game over. This is a good thing as the control scheme can sometimes be a bit finicky. 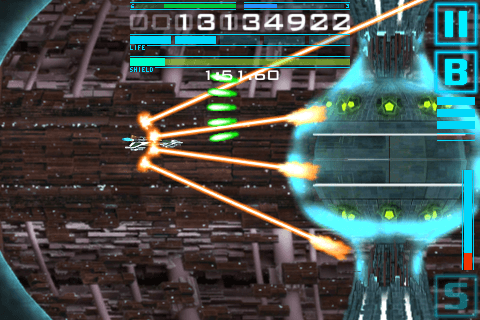 There are a few different choices for control; exact touch, relative touch, joystick, and tilt. Of the four choices the most effective are the first two, as the joystick feels a bit wrong while the tilt controls can be very frustrating as one wrong movement can cause your ship to careen into a hailstorm of bullets. The touch controls however are very well done and these are most likely the ones you will be using.

This is also good considering that to use specials you will also have to touch certain areas of the screen to activate them. Either using your bomb or the special weapon equipped to each ship. There are two beginning ships and then there are two more to unlock down the line, by beating the game in Casual, and then beating the game on any of the other harder difficulties.

Overall:
Assault Squadron is both graphically amazing and sounds amazing. The gameplay is quite flawless with only a hint of issue that comes with the controls. But this is easily remedied through picking another control option. The unique way that the game changes from a vertical and a side scrolling shooter are a nice touch on top of that.

I give Assault Squadron: