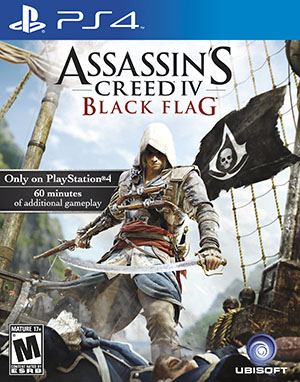 Overview
Many thought that the Assassin’s Creed franchise was running out of steam with the release of Assassin’s Creed III, which seemed to divide fans more than the previous entries. Ubisoft pushed ahead, however, with their army of developers and kept the fundamentals largely intact. It’s safe to say the approach worked and players once again are taken on a historical adventure with that ominous back story still very much alive.

You could say Ubisoft got fairly lucky here as well, as Black Flag had the pleasure of launching on the next-gen consoles almost side-by-side with its current-gen counterparts. We delved to see how it stacks up on the PlayStation 4. 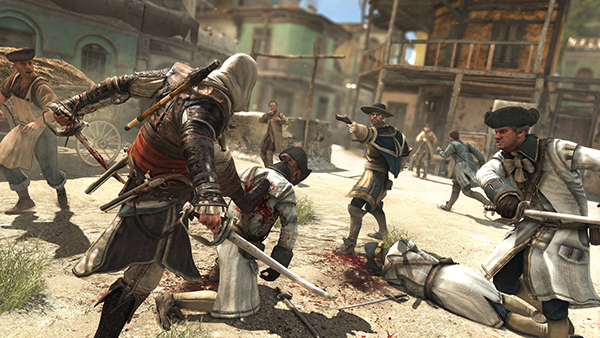 Story
Set in the early 18th century, players take on the role of Edward Kenway who is an aspiring British privateer hoping to make a name for himself in the West Indies. The huge reward that comes with piracy turned him to a life of plunder on the high seas facing powerful empires, intrigue and betrayal among his own fellow pirates.

Interestingly, the Assassin Order, which is so prevalent in previous games, doesn’t play as big of a role for most of the game as one would expect. Edward obviously becomes an Assassin but at the same time he isn’t really an Assassin. In fact, he is at odds with the Order for a good chunk of the story despite wearing their uniform and skewering foes with the hidden blades. Also unclear is just how he became so adept from the start of the game, with no real training unlike Ezio who honed his skills over many years.

As players take part against the Spanish and English Empires with volleys of cannon-fire, the Templars are ever present and continue to scheme in order to control human civilisation by unlocking the secrets of the Precursor Race and their high-tech artifacts. 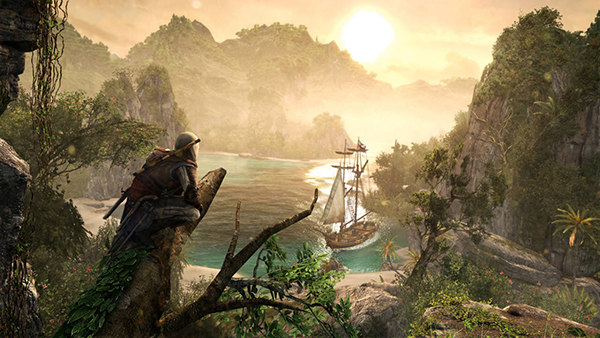 Although Revelations was the last game I played, I noticed a lack of real urgency in Black Flag. The Assassin Order seems almost inept at combating the Templars while Edward himself hardly takes an interest until the end. The focus on the micro-plot, which is about the pirates, is done amazingly well and reminded me of classic literature about betrayal that accompanied wealth during the age of exploration.

But that comes at the expense of the macro-plot to an extent as players exit the animus less frequently. Speaking of which, we now have a first-person view when we’re in the “real” world and activities consist of hacking other employees for more top secret data regarding the Templars. That’s right, this time you are a new character who works for Abstergo Entertainment, inspired by Ubisoft’s game studios. We’re breaking the fourth wall here, people. But by using this logic, does that mean Ubisoft is run by the Templars as well? 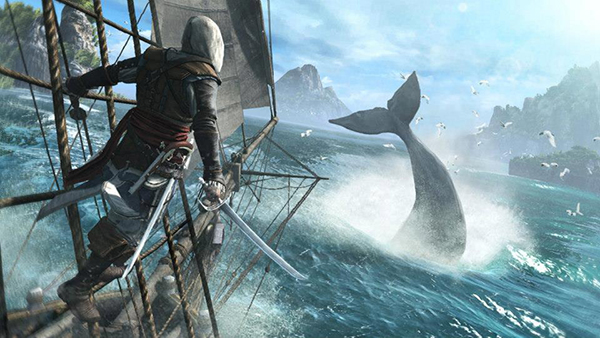 Gameplay
Those familiar with Assassin’s Creed will jump in without any problems as usual. Ubisoft has maintained the free-running, sword-slashing formula for Black Flag but with one clear distinction: naval battles have been tuned to near-perfection. You will find yourself sailing, fishing, sinking enemy ships and upgrading your own more than running and climbing on foot.

Ubisoft has made on the largest maps yet where you can destroy and take over coastal forts, explore uninhabited islands, hunt for whales, dive for shipwrecks and of course board ships for money and materials. All while navigating storms that threaten to sink you with “rogue waves” and waterspouts. The more powerful your ship becomes the greater chance you have of taking on the floating fortresses known as man o’ wars. There is just so much to do and you’ll spend countless hours trying to collect and upgrade everything. 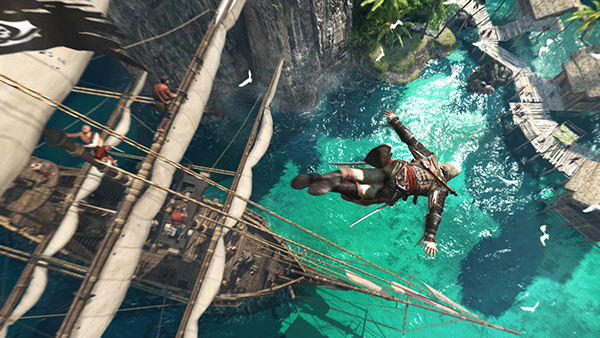 While the tremendous naval aspect is a welcome improvement, the action on firm soil is starting to become a little weary. It’s still much easier to just kill everyone rather than take your time on assassination missions. There is still a huge reliance on tailing and eavesdropping stealthily and the game mechanics and AI get in the way of making this any more enjoyable and believable from the previous games. Moving forward, these features must evolve beyond existing limitations as they are fundamental to most missions.

Outside the animus you can walk around your office taking part in hacking mini-games for precious information on Assassin’s Creed’s true story and your predecessor, Desmond, as the plot inside the animus doesn’t really kick off until later in the game. 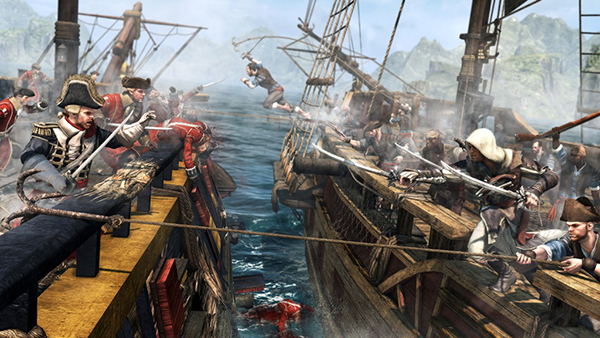 Multiplayer stubbornly returns, and while most players will stick to the singleplayer, it’s there for others to dabble in. It’s largely the same as before but without the deathmatch mode. Instead you’ll be trying to fool other players into thinking you’re a harmless NPC before assassinating them. You can create your own custom character and improve your skills but again, it’s doubtful you’d remain here when the next game comes out.

Audio
The sound design is great as always especially during naval warfare with the cannons, cries from your shipmates and the splintering of wood make for an awesome experience. Voice-acting is among the best in the series and the music matches the atmosphere impeccably with some fast-paced string instruments during battle.

Unfortunately I encountered a lot of weird glitching during sword fights where the sound doesn’t keep up with the action and it lags behind. I’m not sure if this is isolated to the PS4 version or if every platform encounters this.

Visuals
Year after year Ubisoft has used more or less the same engine for Assassin’s Creed with some heavy tweaks to keep things looking good. Black Flag is the nicest looking game in the franchise to date and while the textures are still looking flat and facial models a little uncanny, the water and weather effects are outstanding. The locations in the game allowed the team to use a more vibrant colour palette with bright blue skies, lush vegetation and emerald water. 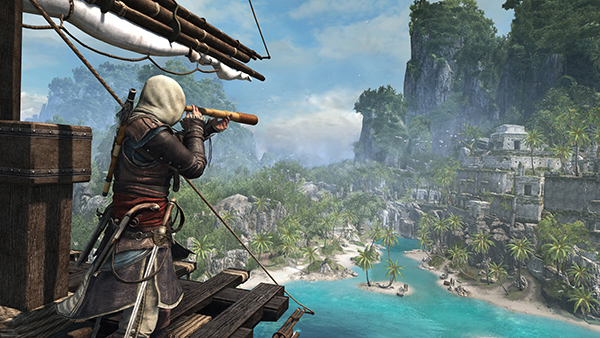 Following the mad obsession over next-gen game resolution, Ubisoft released a patch that upped the PS4 resolution from 900p to 1080p and improved anti-aliasing. While this in no way brings Black Flag in-line with true next-gen, it cleans the picture up and makes for a smoother experience that more or less matches what one would expect on the PC. Until the inevitable 2014 entry, Assassin’s Creed IV: Black Flag is still a PS3/X360 game which sees a welcome improvement when played on the PS4 or Xbox One consoles.

Overall
I honestly had my doubts when Black Flag was unveiled, thinking Ubisoft would rely on gimmicks like dual-wielding and the ever-so-loved pirate theme. But playing through it has made me realise Ubisoft continues to craft some pretty amazing stories in a historical context. I can only applaud them for giving us these intriguing games that show off a slice of history while making us think about the possibilities presented in the sci-fi conspiracy aspect.

While the original concept of “assassin” is almost tossed to the wayside by the 6th entry in the series, Black Flag is one heck of a pirate tale that is as addictive as it is intriguing. There simply hasn’t been an Assassin’s Creed game this captivating since Assassin’s Creed II. If you’re wanting an action adventure title to add to your (tiny) PS4 library, this is the one to buy even if you haven’t played the previous games. If you’re a fan and you have a PS4 then there is no excuse not to get Assassin’s Creed IV: Black Flag with a few extra bells and whistles.