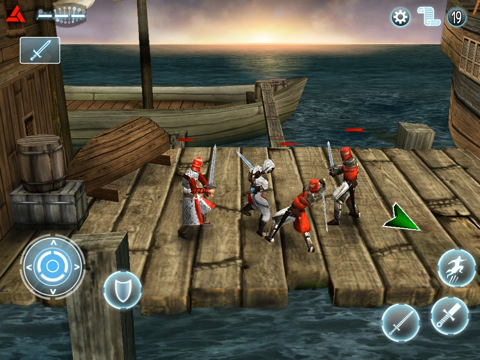 Gameloft originally created Assassin’s Creed: Altaïr’s Chronicles for the Nintendo DS and have now ported the game to suit iOS operating system.  However, if you were expecting an Assassin’s creed experience for the iPad and iPhone then I’d have to say that Assassin’s Creed: Altaïr’s Chronicles is an entirely different game from its console counterpart and that’s saying something. Considering the limitations of the iPad and iPhone, just don’t go in expecting an open-world action adventure.

Set supposably as a prequel to the first Assassin’s Creed, the story (on paper at least) puts players in the shoes of Altaïr in his quest to find the ‘Chalice’, a mysterious object that will aid the Assassin against the Templers. A slight improvement over the DS version, the iOS version features voice acting to aid cutscenes, rather than just scrolling through plain text as seen in the DS version. Whilst it is a nice addition to have in the game, unfortunately both do little to improve them as they are very bland and dull, voice acting especially. 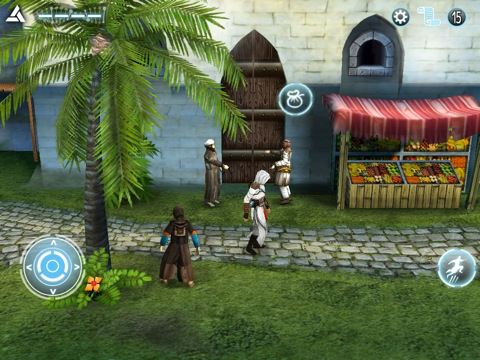 The story itself doesn’t really add much to the overall Assassin’s Creed storyline mainly because it is told solely from Altaïr’s perspective. There are no crossovers to Desmond Miles, very little references to the Animus machine except for the menu screen and the story doesn’t lead onto the main game or give any insight on the overall Assassin-Templar struggle.  The Assassin’s Creed series is fundamentally built around these vital story plot points, and leaving them out in this game feels very sloppy and rushed.

Players are set down a linear path through checkpoints, collecting blue orbs to upgrade their weapons and health bar. The game is split between combat and platfroming sections which are more along the lines of ‘Prince of Persia’ rather than its stealth gameplay as seen in its console counterpart. However both combat and platfroming are crippled with awful control issues which hinder the game’s overall gameplay. 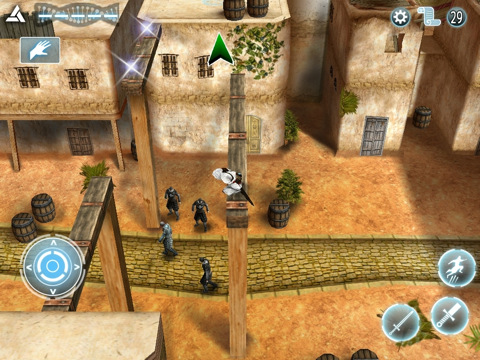 Combat with Altaïr’s two light and heavy attacks usually fall down to ‘button mashing’ with the occasional finishing-move combo. However, enemies within the game provide virtually little to no challenge or difficulty and are a breeze to pass. Platfroming on the other hand is unintentionally difficult thanks to the game’s unresponsive and difficult controls. Whilst neither combat nor platforming are standouts, the latter does provides some challenge and is genuinely fun at later stages of the game when they work that is… Expect to see the “your dead” screen a lot.

There are some mini-games thrown in to the game and they do help to mix up the bland action, occasionally. In pick pocketing, you need to find and move a key to the exit without touching any other object and in interrogation you need to tap a number of targets in time. However both do very little overall except for giving players a brief break, as they are both extremely easy and again provide little to no challenge at all. 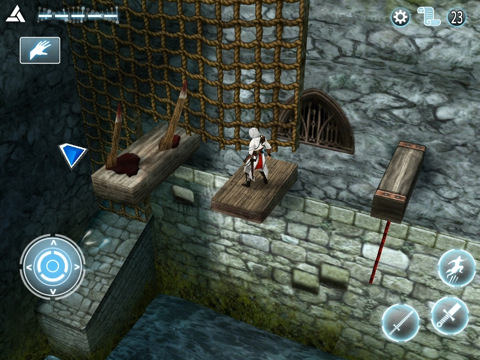 Overall, the game looks ok for an iPhone/iPad game. Combat animations look pretty smooth and perform well especially in the games few boss fights. However character models in this game look extremely blocky and dull. The cities themselves look the same, as if the same backdrop had been reused for each one, but with that said the environments do look alright and there are some variations between them.

Some may be glad to know that there is battle music, combat sound and audio is included within the game, unlike the DS version. But again, these don’t really add much nor detract from the overall gaming experience as they are quite generic and bland. But it is nice to know that they have been included even though you will be hearing the same battle music, enemy grunts and sword swings over and over. 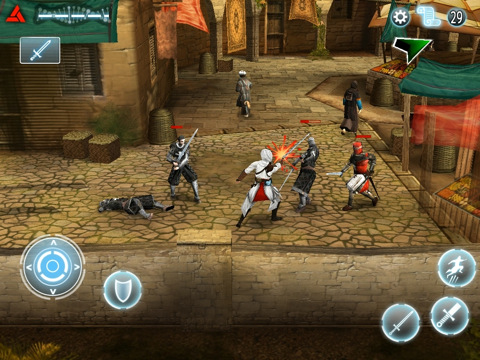 Assassin’s Creed: Altaïr’s Chronicles for the iPhone/iPad is a generic action-adventure game with the ‘Assassin’s Creed title’ slapped on to the back. Awful unresponsive controls mixed with a story that bears little resemblance to ‘Assassin’s Creed’ at is downright poor form, decent combat and platforming animations are the only highlights in this game. It’s not all bad just don’t expect an authentic Assassin’s creed experience.

I give Assassin’s Creed: Altaïr’s Chronicles for the iPhone and iPad: