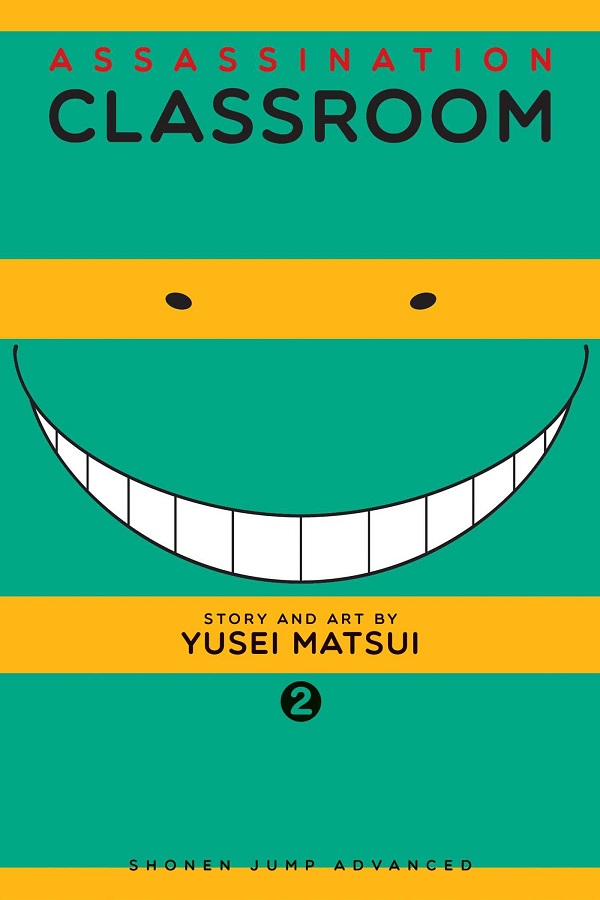 Overview
Despite the large amount of manga series that take place in a school setting, very few series actually take the time to create a story utilizing an entire class. We’ve already seen how different Yusei Matsui’s Assassination Classroom tackles the concept of a school in the first volume and now that the second volume of this unique comedy manga has hit stores, is the story worth continuing?

Story
Despite the best efforts from some of the students of Kunugigaoka Junior High’s Class 3-E, only one has even come close to harming Koro-Sensei, their super powered teacher who is promising to destroy the world by the time they graduate. As such, a new teacher named Irina Jelavich has been assigned to Class E under the guise of a language teacher while her true nature is that of a merciless assassin that uses her feminine wiles to eliminate her target.

Even with the introduction of this new teacher, Class E must also deal with upcoming midterms that they are woefully unprepared for while also planning for an upcoming school trip. Class E already has experienced a far different classroom experience than everyone else throughout the first volume but in the second volume things only get better.

As you may surmise, there are three mini-arcs that take place throughout the second volume of Assassination Classroom though the final arc does not reach its conclusion in this volume and leaves readers at a cliffhanger. In many ways this makes the second volume of Assassination Classroom better than the first as the first volume that would lose momentum anytime a new classmate was introduced only to be relegated back to being a side character immediately after the events.

Thanks to the back to back story arcs in volume two this is no longer an issue and it seems that Yusei Matsui has found a relatively perfect length for these mini-arcs as they run three to four chapters in length depending on their importance to the overall story. The first arc features the introduction of Irina Jelavich who believes that she is more than capable of taking down Koro-Sensei and thanks to her hostile attitude and unwillingness to teach the students, Class E quickly turns on her but once this issue is resolved not only does the class receive an interesting new teacher that has issues adapting to a normal life style and still readily uses her beauty to get what she wants but a fresh set of jokes stemming from her.

The real highlight comes from the midterms as we see just how revolting Kunugigaoka Junior High is. Previously readers were introduced to Class E being the worst class in school and were treated poorly because of this, but in this arc pulls back the curtain on why Class E exists and how it became that way and it is all thanks to the principal of the school, Gakuho Asano. Asano serves as an all seeing enemy that forces even Koro-sensei to obey his whims and utilizes various cruel and dirty tricks to ensure that his learning system, one that uses the mistreated members of Class E as an example of what can happen to them if they choose to not work their very hardest, stays in place, even if it means that everyone in Class E must suffer.

With the introduction of a truly evil principal that is pulling the strings to keep Class E in line and a well-established new teacher, who is called Ms. Vitch once the students are on friendly terms with her as opposed to Hellabitch, the story continues to move at a strong pace as we the school experience continues on with the addition of these new faces and small developments with the rest of the cast, including Karma and Koro-sensei as he does his best to help his pupils grow and teach the students who see no way out of their current lives other than to assassinate him.

Artwork
The artwork throughout volume two remains similar as before as it features a very clean look that with simplistic but memorable character designs for the core cast of students. There is a certain element this time around that really does deserve mentioning and that is the way the students visualize the tests they take. As the class takes their midterms they visualize various questions as monsters that need to be slain which is a real unique take on the situation. It also should go without saying that Koro-sensei remains a highlight throughout the volume thanks to his humorously drawn expressions and attitude.

Extra Content
Assassination Classroom Volume 2 begins with two pages that describe the story so far as well as a brief introduction to the various characters that have been focused on so far. Following this, at the end of every chapter there is both a sketch and brief description for a character or extra little pieces of information about either the school or a matter mentioned in the chapter while the start of most features artwork of the members of Class E. Finally to close out the volume there is a mini chapter featuring a crossover with the non-localized manga The Mishaps of Kusou Saiki that is then followed by some brief character design notes and a message from the author.

Overall
With the addition of the smart but also immature professional assassin Jelavich and the viciously evil Principle Asano forcing Class E down, Assassination Classroom Volume 2 manages to outperform its predecessor by relying on interesting min-arcs and introducing new characters to keep things fresh. Despite how serious things can be at times, especially with the midterm arc, there is still plenty of humor to be found here, mostly thanks to Koro-sensei, Jelavich, and Karma. It does feel like the whole assassination element is taking a bit of a backseat for now as very few characters try to take Koro-sensei down but this Assassination Classroom seems to only be getting better as it goes on.