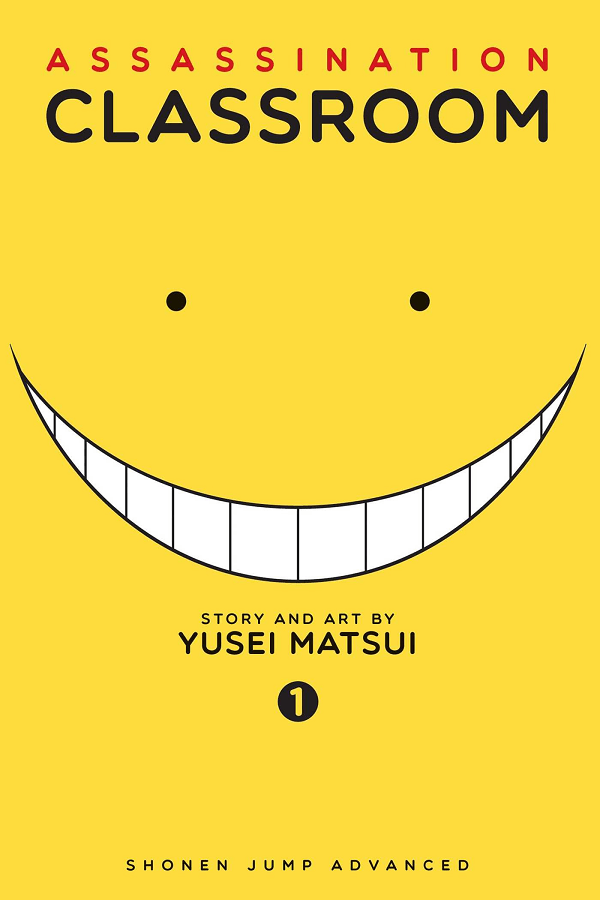 Overview
Managing to grace the pages of Weekly Shōnen Jump is an amazing feat for a mangaka and Yusei Matsui has managed to write a series that is still holding strong two and a half years in. This series happens to be Assassination Classroom and now that it has been released in North America by Viz, does this first volume warrant a purchase?

Story
Kunugigaoka Junior High’s Class 3-E is shunned by the rest of the school and used as a tool to threaten students from falling behind in class or failing tests. You see, Class 3-E is where the “losers and rejects” of the school have been placed. These students are the ones that either didn’t fit the mold of the school or simply couldn’t keep up and as such they are placed in a dilapidated school building atop a hill with no access to the main building and only scorn from the teachers.

This isolation and contempt might be a good thing for the students of Class 3-E as they are now the only ones who can hope to save the world. Shortly before the story begins, the people of Earth realize that 70% of the moon has been obliterated, turning it into a permanent crescent moon. A strange tentacled creature steps forward and claims responsibility for this damage to the moon and states that he will do the same to the Earth at the same time next year unless he is killed before then.

Koro-sensei as he is called by the students had one request to make and that is until that time he would teach these students at this exact school and not harm them in any way. Seeing a chance, the Japanese government has promised a 100 million dollar reward to anyone capable of slaying the teacher and has provided these students with rubber knives and BB pellets crafted from special material capable of causing extreme harm to the target but none to humans.

However with a target capable of moving at Mach 20 this is a task far more difficult than the hardest pop quizzes could ever be and here is where we find the start of Assassination Classroom. Now thanks to the series’ name, it may lead some people to believe that this is a series all about violence but in fact the various assassination attempts are almost always played off as jokes and rarely feature actual danger or violence. In fact, most of the comedy comes from the actual assassination attempts as they reveal just how strange Koro-sensei is and the students reacting to his strangeness.

This is due to the way that Koro-sensei reacts and, as mentioned before, the way that these weapons can do no real damage to a normal human. Instead what we find in this first volume is mostly classroom oriented stories as, despite being an alien-like creature claiming to be from Earth, Koro-sensei appears to genuinely care for the students of Class 3-E and is doing his best to teach them. This creates stark contrasts in the subject and the visual of course as Koro-sensei provides extra lessons to a female student in his class while she talks about how great she’ll do on the next test while at the same time trying to stab him with a knife.

Throughout the course of the first volume only four students of Class 3-E are really given much focus and unfortunately, two of them appear to already have been given the background treatment and nothing more. While it appears that the two other students will play a larger role in the future, spending these early chapters introducing us to students only for them to fade back into the crowd is a bit disappointing, especially since these character centric chapters do show how much Koro-sensei is trying to help them out, as each student has his or her own strength that he is trying to help blossom.

Artwork
Yusei Matsui’s artwork in Assassination Classroom is very clean and makes the series a very easy read thanks to his character designs that are just detailed enough to stand out but at the same time quite simple. The design of Koro-sensei is, of course, rather simplistic looking but that is on purpose and throughout this first volume we are shown how his face changes color depending on his mood.

It is interesting to note that there are a couple of panels that are a bit more graphic than others and a few of the assassination attempts feature a lot of extra detail put into the character and their motions. Viz’s handling of the artwork and the various sound effects is as clean and simple as one would expect from the company as they have not damaged any of the artwork.

Extra Content
In-between chapters in Assassination Classroom Volume 1 there are three small character profiles about a few of the introduced characters so far, some small mini-sketches about events that happened outside events in that chapter, and a list of rules that Kunugigaoka Junior High has assigned exclusively to members of Class 3-E. The volume closes out with a two page extra called Recess that involves Koro-sensei using his extreme speed to draw an image on the Earth.

Overall
Assassination Classroom has so far turned out to be a unique and refreshing read through Volume 1. While there is always a certain sense of seriousness, due in part to flashbacks of Koro-sensei’s possible origins and the lingering threat of the end of the world, this first volume works as a great introduction to what Koro-sensei is capable of as well as his memorable personality while also giving readers plenty to laugh about.

While there are issues with the way that the student development has so far been handled, the series is only just getting started and it appears that things are only going to get more complicated and likely far sillier as the series progresses.