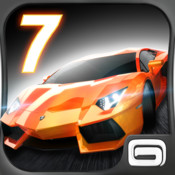 Gameloft releases a new entry in the  Asphalt series with about as much frequency as Activision with Call of Duty. Some call that kind of release schedule cashing in, but when Asphalt 7: Heat delivers on every level you’d expect from a handheld racing game, then there’s not much to do but praise the game.

Well, that, and thank your lucky stars that unlike its previously noted console comparison it provides more value than your average morning cup of coffee. 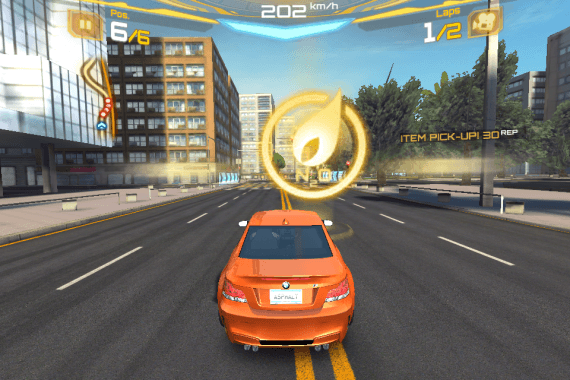 Career mode features thirteen cups, each with several races each, and each cup is unlocked through use of a star system familiar to anyone who’s played recent iOS games: each race gives one, two, and three star challenges. Once these are accomplished, the stars are used as a form of in-game currency to unlock more races, and then the cycle repeats itself ad infinitum. These career races include various modes: drifting challenges, races against the clock, forcing other players to crash, and the like.

There’s also in-game dollars to be earned via in-race pick ups and simply by completing the races themselves. This cash can then be spent on upgrading your car and purchasing new vehicles (including an unlockable DeLorean. Yes, that DeLorean). The upgrades, though useful, were generally a waste of cash however, and that ties in to the game’s controls.

You see, Asphalt 7 is not difficult, and the default controls only make this point clearer. Acceleration is automatic – all you have to do is tilt your iDevice for steering controls and tap the screen for a nitrous boost. Railing along most of the tracks in the game doesn’t really help with the lack of challenge, either.

But aside from making upgrades obsolete, the lack of true difficulty is something that will annoy, but not hamper the experience, especially as you unlock more advanced cups. Besides, who wants to be maniacally tilting a phone during their morning commute on the train? 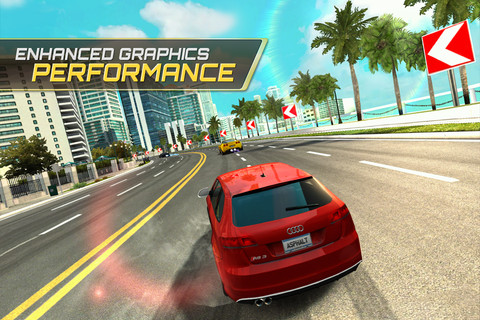 For those who require a more hands-on approach to controlling the minutiae of racing, the other control schemes included make good use of the touch-screen on even an iPhone: the buttons are cleverly placed so as to never obstruct truly vital screen space.

Asphalt 7 also features a robust multiplayer suite, both online and on local Bluetooth, with races capable of handling up to six people over fifteen different tracks. Results in both career mode and multiplayer can be shared via Asphalt Tracker, so you and your friends can engage in not-so-friendly competition.

For those looking for just a quick fix of Asphalt, there’s also a Quick Race mode that zooms you right into the action.

As an arcade racing game, Asphalt 7: Heat provides what you’d expect from a full-price retail racing game, minus some shines and baubles, and plays well enough to keep you interested well beyond your 99 cents’ worth.

The graphic’s engine got quite a lot out of the Retina display of even my ageing iPhone 4, and the occasional frame rate hiccup didn’t distract from the experience at all. Sunlight flares as you speed over hills, the varying real-world locations look stunning, and the cars themselves look great. The only complaint you could levy at the visuals is that car damage is not shown on your vehicle, so you’ll have no idea how close you are to getting wrecked. 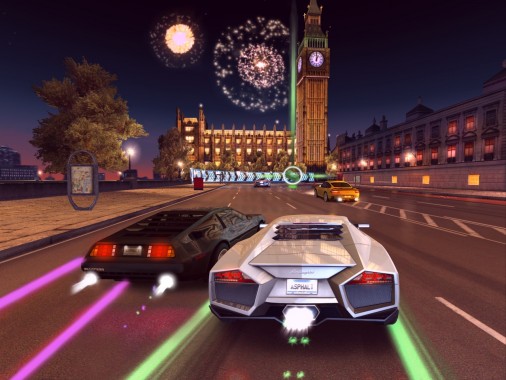 The audio suite is also impressive. The track to most of the game features electro that sounds as clear as can get. However, if that genre of music does to you what it does to me (generally my ears begin to bleed, and then I curl up on the floor, desperately scanning my phone’s music library for some rock classics) then there’s the option of turning it off and listening to the sounds of pure motor, tires, and crunching metal; hopefully not too much of the latter.

Music taste aside, Asphalt 7 looks great, sounds great, and will constantly impress you with special effects like the fireworks over London or the bright lights of Shanghai.

Asphalt 7: Heat is a solid arcade racer whose only flaw is that it seems to merely be going through the motions. On paper it ticks all the boxes, but there’s nothing new, innovative, or special about it. However, it provides strong core gameplay, beautiful visuals, and polish that makes similar games pale in comparison.

Asphalt 7: Heat is a console experience on your portable device, and at 99 cents, it offers a far better value proposition. It will be very difficult for any other iOS racer to top this game… well, at least until Asphalt 8 hits the app store.