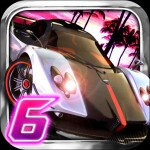 Asphalt 6: Adrenaline, developed and published by Gameloft isn’t your typical racing game. Although at first glance it may appear to have gone down the realism route, in actual fact it deviates from the classic formula in a way that many other racing games before it. It is kind of hinted to in the game title, but this game introduces the aspect of boost in the form of Nitro to rocket propel your car to super speeds.

It is a route many other games have taken; the Need for Speed series and the Burnout series just to name a couple, but with Burnout out of the picture on the iPhone, it seems that Asphalt 6: Adrenaline’s main rival is the recently released Need for Speed game. But how does it fare in comparison? It overtakes its opposition racer, leaving Need for Speed in the dust. 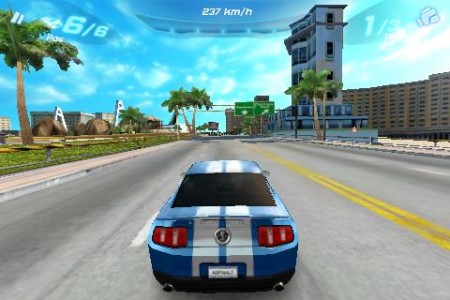 Asphalt 6: Adrenaline has a hugely in-depth and detailed career mode. It offers 11 different leagues and 55 events in the game with numerous tuning options to speed up your ride. The single-player mode is excellent and offers a colossal amount of individual races, taking you through and introducing you to the 4 different race modes as you progress through the career. As you move the levels, opponents get harder, but this matches the skill progression because as they get more difficult, you become a better driver.

You earn money in each of the races which can then be used to utilise the decent customisation options on offer. Money is earned through a number of methods. Performing stunts and tricks considered dangerous and/or risky results in a monetary reward, such as driving on the wrong side of the road and getting a near miss with a item of oncoming traffic, or one of my personal favourites, ramming an ordinary car which is just a part of the traffic on the road, only to get a cash bonus under the name of ‘Traffic Control’. Other factors as to how much money you get include final position in the race, a bonus for drifting in-game, collecting money icons denoted by green and orange dollar signs (orange icons gives a larger bonus, and not only in the case of cash icons), number of enemies eliminated (forced off the road to crash, but they respawn and are still in the race) as well as other minor factors like rewards for damage of public property. As you can infer, there is an emphasis on carnage, although the game doesn’t go as far to provide you with weapons, so in a lot of ways, the aims of taking down your rivals and finishing in 1st place make it a lot like a portable version of Burnout, albeit from a different developer. 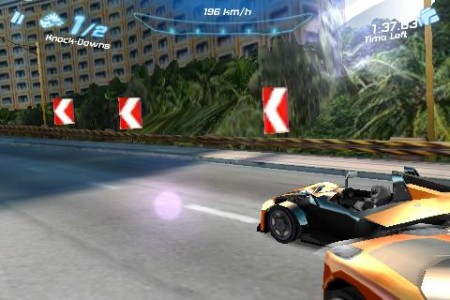 As well as the cash symbols, you will encounter a number of other symbols during the course of each track. And, as I said, the orange signifies a larger bonus, but not all the things available to acquire by driving through are about bonuses to your bank balance. The other items available to pick up are mainly regarding boost. Orange boos pads give a one-off powerful boost, but blue and orange pick-ups in shape of flames actually add to your boost meter which you can activate by touching the right side of the screen. When this boost meter is maxed out you get something known as ‘Adrenaline’ in reference to the title, and this, for lack of a better expression, is basically a super-boost which carries on for longer than normal and allows you to go faster. 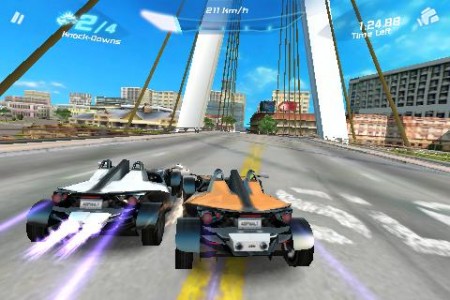 Customisation options are also very good and this is where money earned from races can be spent. This includes buying new decals and designs for your car, tuning it to improve it’s performance in competition, or even buying an entirely new car. The cars are even from real car manufacturers and really are the real deal. The graphics of the cars are also very nice, and impressive given some of the shoddy and visually uninspiring games released on the platform. Unfortunately, the in-game scenery and backgrounds aren’t quite up to the same standards, with some grainy and blurry objects dotted around, but you have to commend them for making significant changes between the different real-world countries. If you are in Tokoyo, the game clearly reflects this. 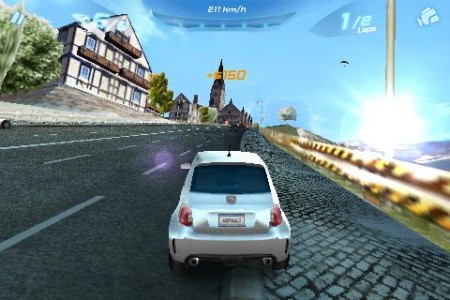 On top of the enjoyable Career there is a multiplayer mode too. However this feels a little bit tagged on, although to be quite honest, the iPhone isn’t the greatest system for online play anyway. It is advised you stick to single-player as the multiplayer side of things leaves a lot to be desired.

Overall, Asphalt 6: Adrenaline uses formula that is known to work well: the combination of realistic cars with some boosting added in for good measure. The control scheme of tilting your iPhone to steer is intuitive meaning you can quickly get the hang of it, even if it can be slightly dizzying trying to watch the screen as it is moved all over the place. Similarly, the other controls are just as simple, with the right side of the screen reserved for boost, and the left for braking, and the car being set to accelerate of it’s own accord. In the single-player you’ve got a lengthy and substantial Career mode that should keep you busy for ages, then there’s Freeplay races to keep you busy after you’ve finished that. You could even trial the underwhelming multiplayer if you got bored! It’s a solid racer with a few issues, but on the whole, it is an entertaining experience.