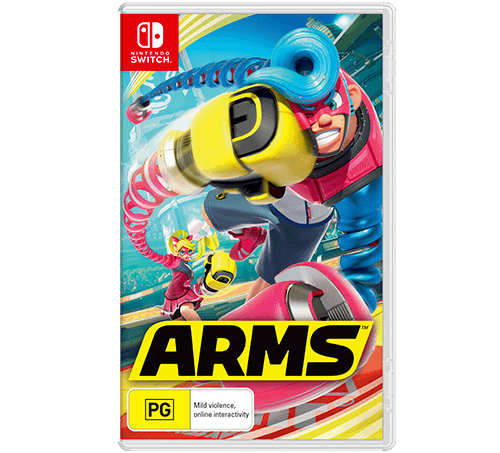 ARMS is Nintendo’s most recent attempt at a brand new IP, featuring 10 unique fighters who all excel in stretching out their arms (or hair) to land a blow on their opponent. When the boxing-based 3D arena fighter was first revealed people were initially pretty quiet on the idea, but the hype surrounding ARMS tended to rise as hands-on impressions of the game started to come out. When I first played ARMS at a hands-on event earlier this year I noted that I had fun with the game but it lacked staying power, so does the full retail game manage to sway my initial opinion? 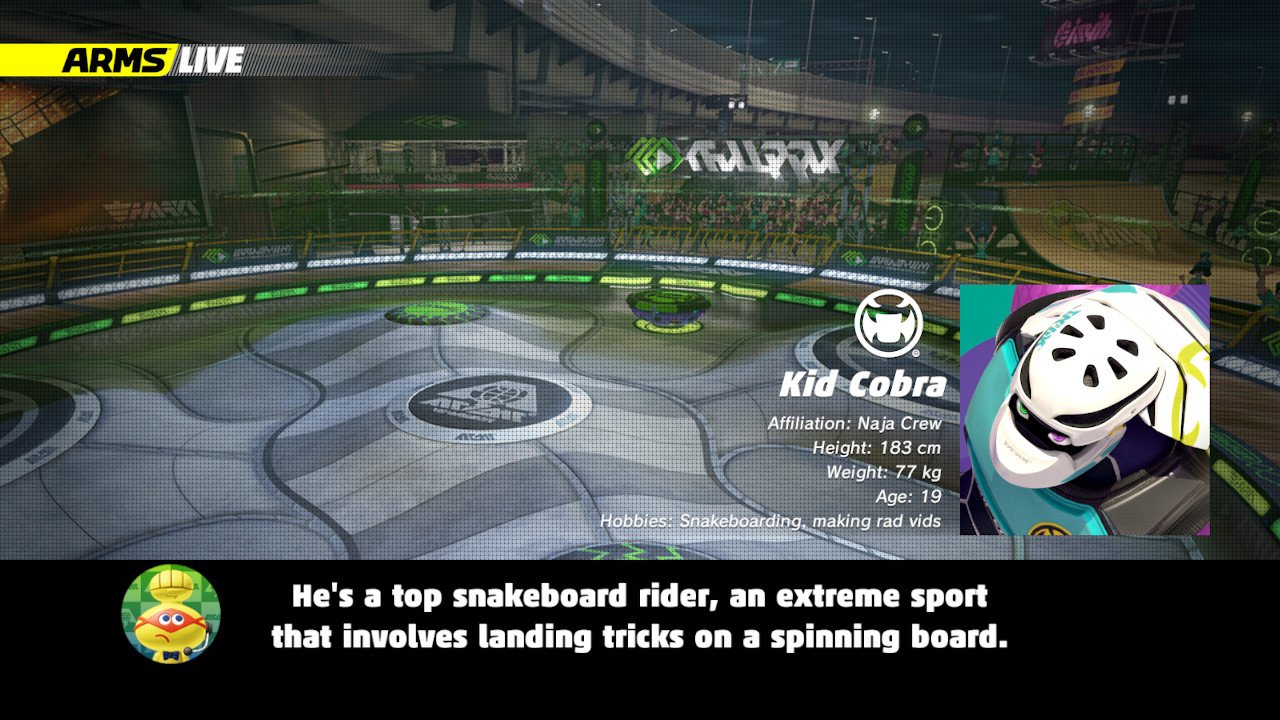 While ARMS has a 10 round ‘arcade mode’ acting as it’s main single player draw there is little story here. At the beginning of each character’s campaign, you get a couple of lines of text mentioning some facts about them and a stats bio. In addition to that, between matches, a robot commentator will comment on your next opponent and sometimes the relationship between the two.

This has about as much narrative as you used to find in most 90’s fighters but with such a fascinating world that seems obsessed with the ARMS circuit, it’s a shame there wasn’t a proper story mode to give these fascinating characters more depth. On the bright side it gives the world and fighters a nice air of mystery I guess. 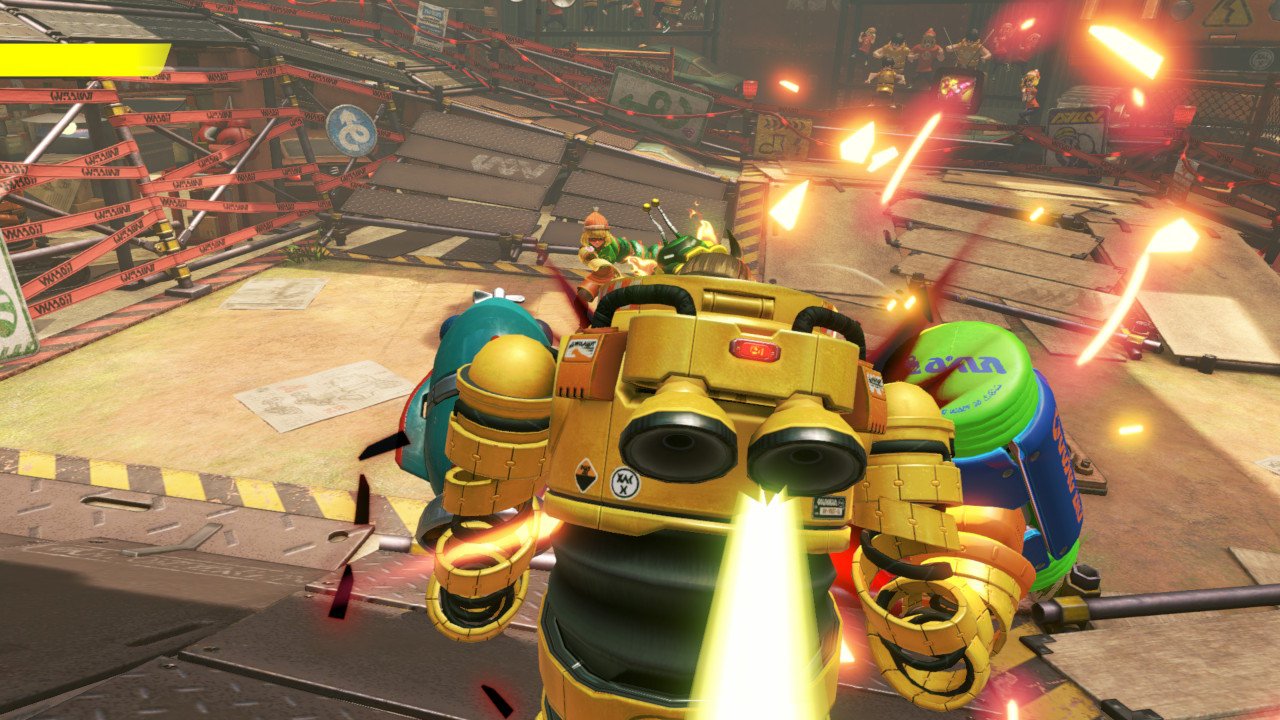 At its core, ARMS is typically a 1 on 1 boxing game focusing on movement in a 3D arena while punching, dodging and countering. The big twist here, of course, is your characters have ridiculous punching range thanks to their spring like arms or hair. Each of the 10 fighters has their own movement speed, punching speed, starting arm selections, special ability (e.g. Ninjara disappears when he dashes in the air, Twintelle can float for a bit and Helix… well he’s very unique let’s just say that) and power. For the most part, the characters are well balanced and as each fighter has access to each arm type there are no issues there.

On top of that, each of your two arms can be equipped with one of 30 arm types which range from standard boxing gloves to mallets to dragons that shoot laser beams. This means there are countless combinations of play styles to mess around with and finding one that suits you shouldn’t be too difficult. Each glove category is vastly different from the last and while you may find you easily beat an opponent with one combination, them simply changing their gloves can throw you for a loop giving valuable meaning to the in-between round glove changes both players can make. 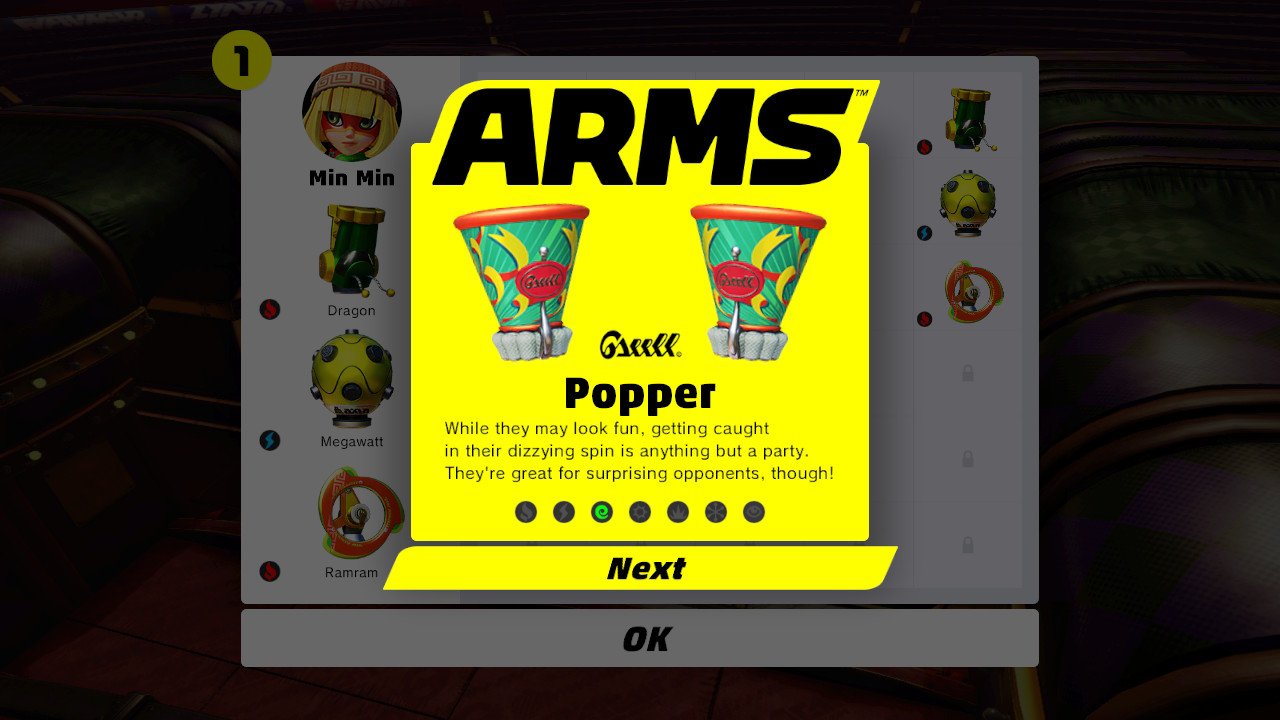 Perhaps surprisingly so, there is a high layer of strategy in ARMS. While the game employs a rather common paper-scissors-rock premise in that punches beat grabs, grabs beat blocks and blocks beat punches (and each of those cancels each other out). Your success in ARMS will come from mastering that system as well as being better in common fighting game tropes such as reaction times, spacing and game knowledge.

Controls are well handled here with every Switch control scheme supported. The motion controls are incredibly solid and responsive. While I found movement perhaps the hardest thing to do with the controls I think that was down to me being uncoordinated as opposed to poor motion controls. I’ve heard many complaints about people grabbing by mistake but I didn’t suffer that issue. 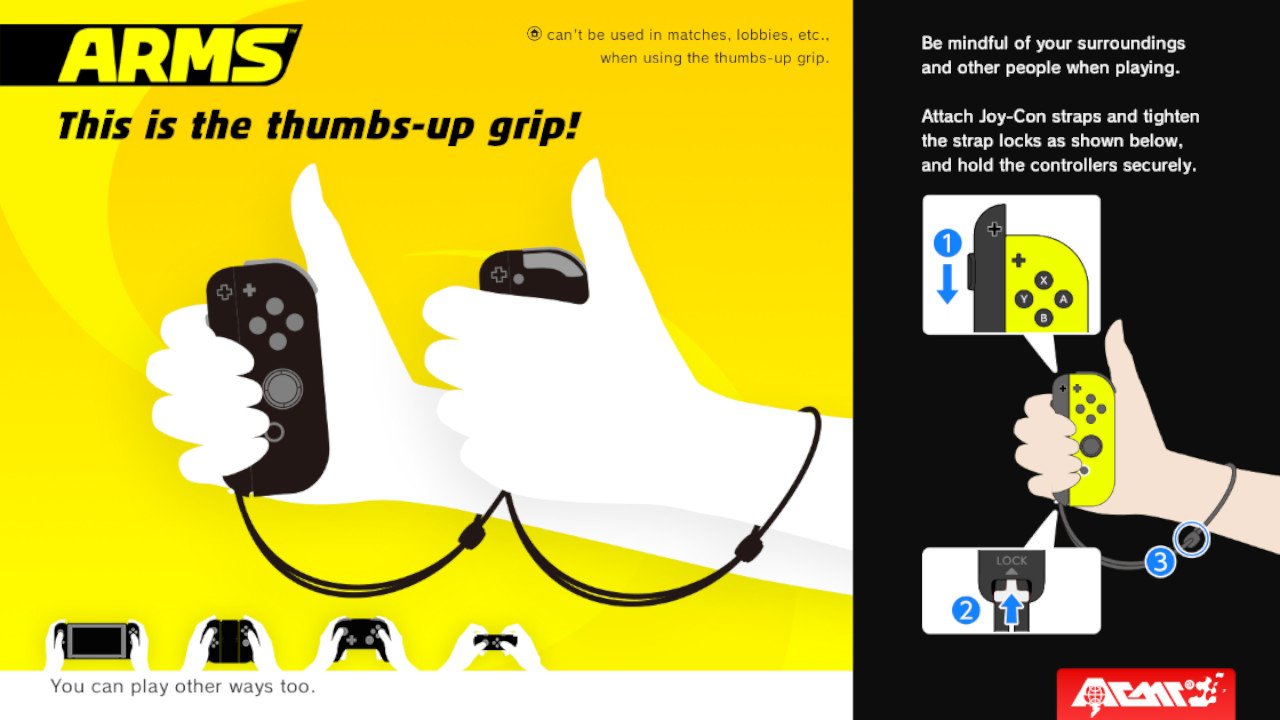 If you’re learning the game I definitely recommend playing in handheld mode with the Joycons attached. This allows you to pay close attention to the action while learning the controls which are a little unconventional (guard, for example, is activated by pushing the left stick in). For some reason, Nintendo didn’t see it necessary to let us customise button inputs at all which would have been greatly appreciated.

In terms of game modes, you’ve got the aforementioned Grand Prix, versus modes which contains some fairly inconsequential mini games (which can be played locally and online) and a training mode. The training mode throws a variety of situations against you to get better at certain aspects of the game which I found great. Meanwhile, the mini games Volleyball, Hoops and Skillshot (break the target) are nothing but small distractions that are better suited to being scattered in between Grand Prix and online matches as they are. 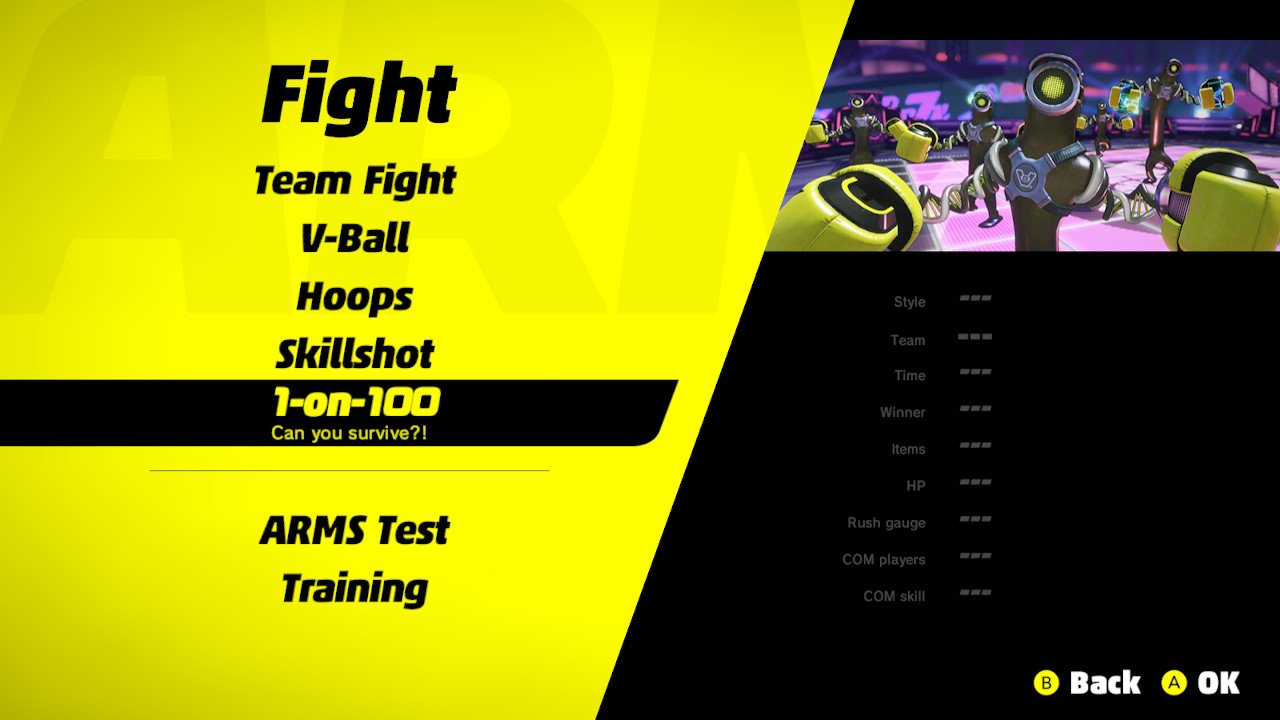 Nintendo deserves a shout out for this online mode. The no lag, minimum connection errors, quick matchmaking mode makes for what could be the smoothest Nintendo online mode we have seen yet perhaps and one of the best lobby based online modes I’ve ever had the pleasure of playing.

So you’ve got an awesome cast of characters, layers of strategy and one of the best online modes Nintendo has ever crafted, so then why does ARMS lose it’s magic so quickly. I think I can nail it on a few specific things, the crushing offline difficulty souring my initial impressions of the game while I was trying to learn the basics, a lack of engaging content and simply the core punching gameplay becomes repetitive too quickly. 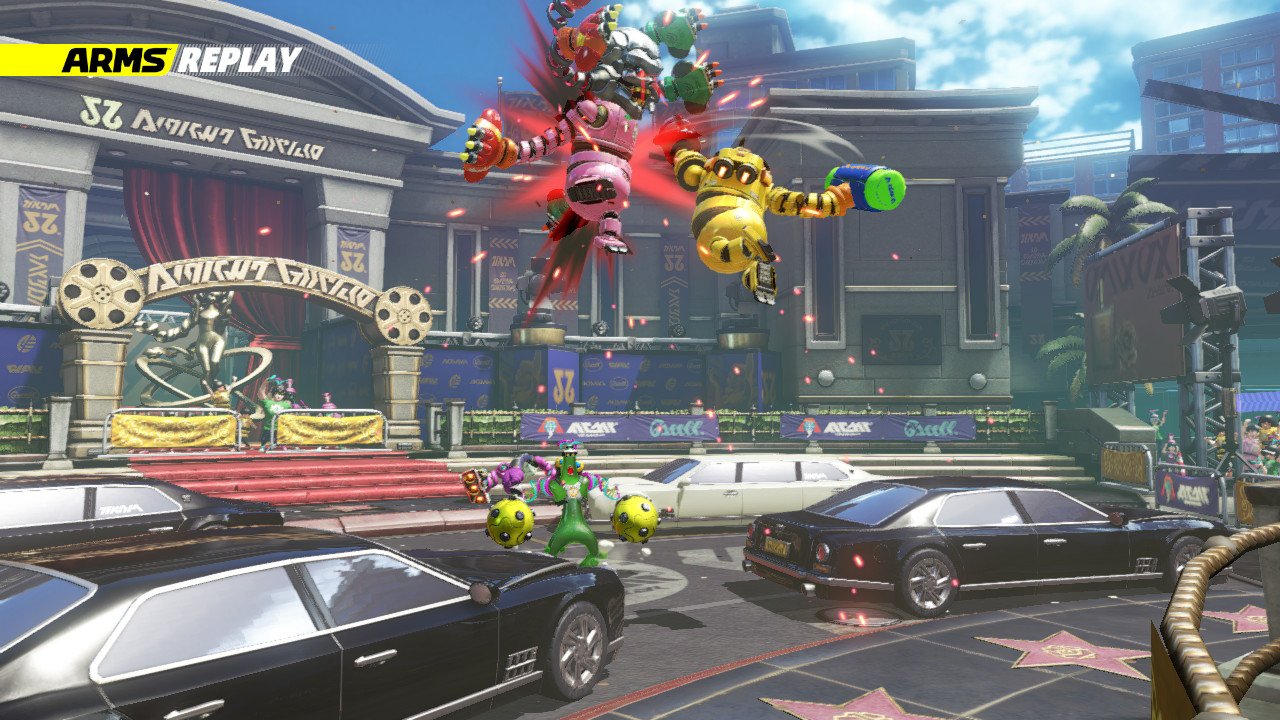 While the concept of the game is easy to grasp earning success is unnecessarily difficult. Even on the 2nd lowest Grand Prix difficulty, I was constantly getting KO’d, taking multiple attempts at each fighter. A game with a fairly fresh concept should have let me ease into the game and then push me in later difficulties, not keep breaking me down until I was just forced to get better. I found player matches against other newbies was actually the fairest way to practice.

While there is a lot of strategy and various weapons, there aren’t really combos in ARMS so your only attack options come down to left punch, right punch and grab and that basically applies to the entire game. There’s almost nothing to unlock outside of new arms for each fighter, but if you’re not already becoming tired of the gameplay than that does little to alleviate the monotony. 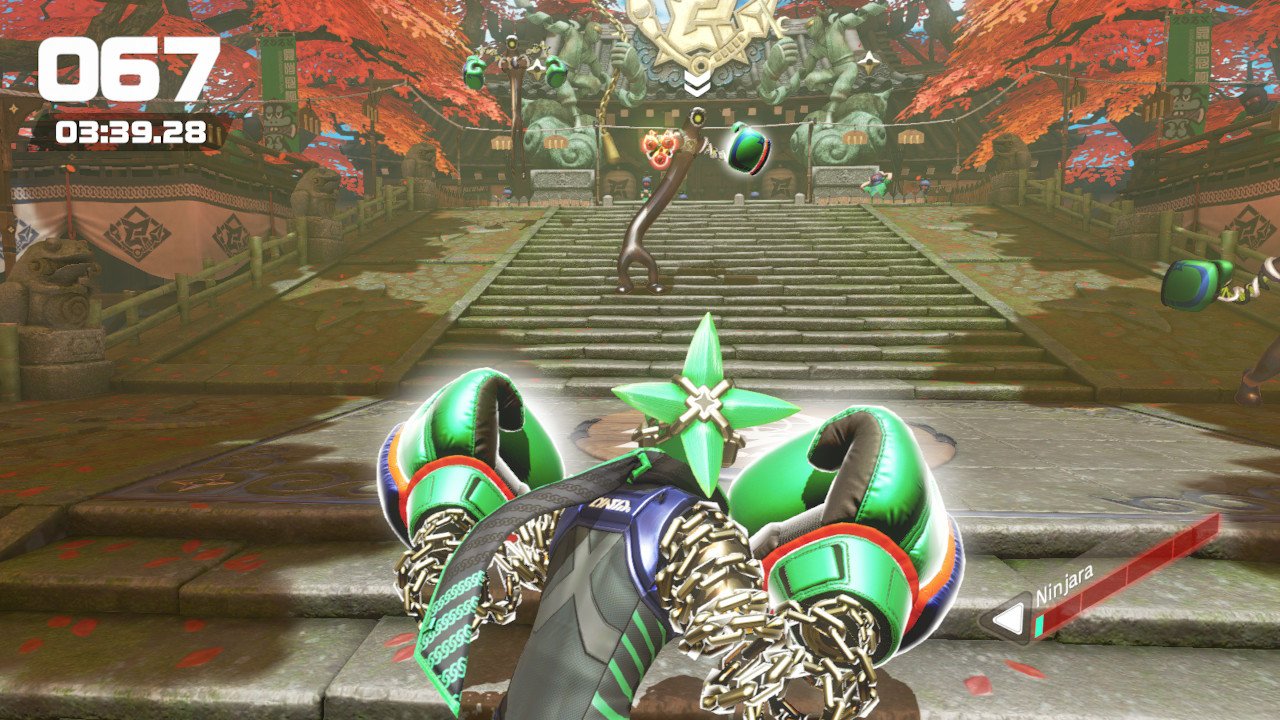 The one game mode I didn’t mention above is the 1-on-100 which is perhaps my favourite of the additional modes because it mixes up the gameplay the most, forcing you to constantly be on your toes moving and allowing you to OHKO 100 Helix clones before taking on a challenging hidden boss. Again this relies heavily on the core mechanics but the multiple opponents that go down in a single hit and challenging boss provided enough of a fresh breath of air. Even this mode doesn’t have much meat to it, however.

For what if offers, ARMS being $80 AUD is simply too much. If ARMS had released at maybe $30 AUD with just Grand Prix (without the mini games), 1 on 1 local, 1 on 1 online ranked and player match and a training mode, the game would have been better off for it. Even with more free content planned, I can easily see ARMS getting pushed aside for other fighting games and the upcoming Splatoon 2. 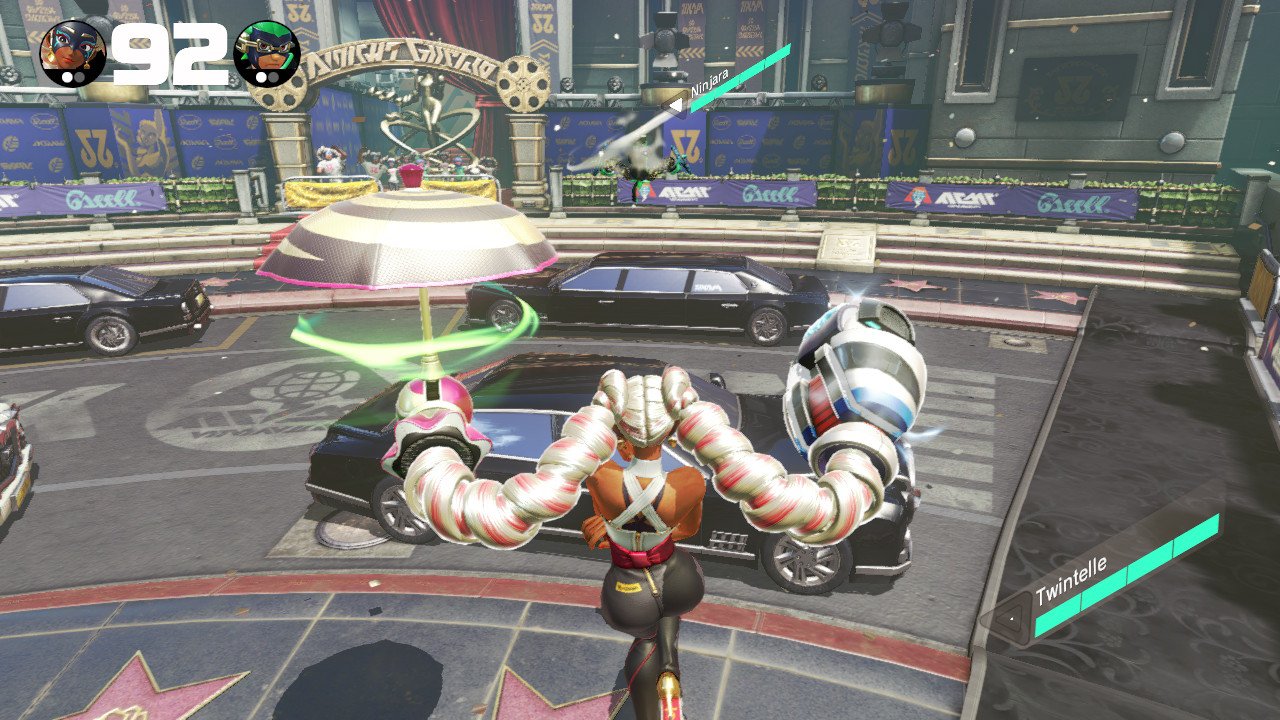 ARMS is a very solid looking game full of the signature Nintendo style of bright colours, impressive character models, and flashy effects. The 10 fighters with all their small attention to details, their animations and the 10+ stages are all lovingly crafted and ooze character (literally if you’re talking about Helix). This is one of the most memorable and diverse rosters in years, from the punchy Springman to the diva Twintelle and kung-fu fighting Min Min. I’ll struggle to forget any of these characters anytime soon. 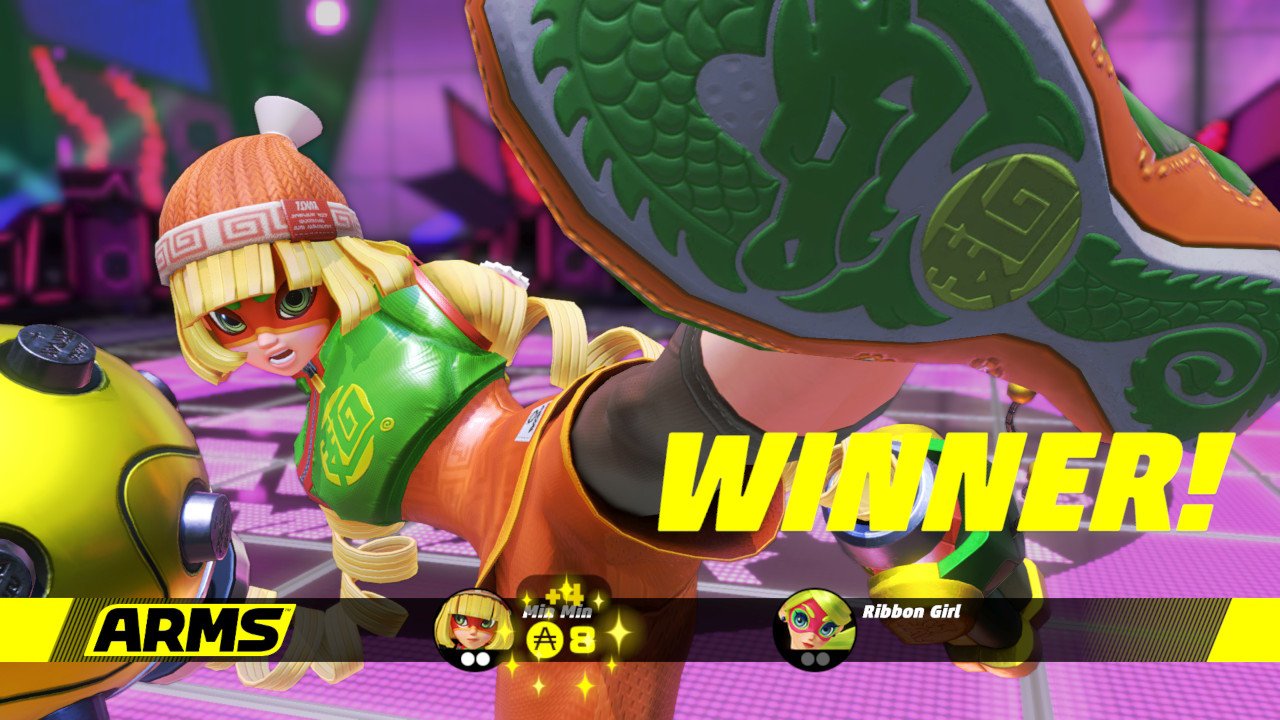 My only problem with the graphics is that there seems to be some sort of white filter over the top of all gameplay that stops this game being as vibrant as it wants to be but it’s a very small issue. The menus and the fighting user interface are all well designed and communicated, even if the training menu was buried in the versus menu for some reason. Performance wise this game maintains an impressive 60 FPS outside of 4 player local battles and almost always runs at 1080p to boot, dropping to 900p whenever split screen is introduced.

While I probably won’t find myself seeking out any of the music in ARMS on YouTube, no one could deny the soundtrack fits this game perfectly. From the chanting theme song that gets your pumped to fight to the character specific themes that all take cues from that characters design inspiration or suit the stage (e.g. Min Min’s ramen bowl stage that has a taste of those classic Asian instrumentals and is perhaps my favourite track in the game), all the music here serves a purpose. Likewise, each character voice matches their design and are performed well, even if the characters don’t have much to say. Lastly, all the in game sound effects perfectly match up to the action and make each punch or block even more satisfying to land in addition to the visual cues used. 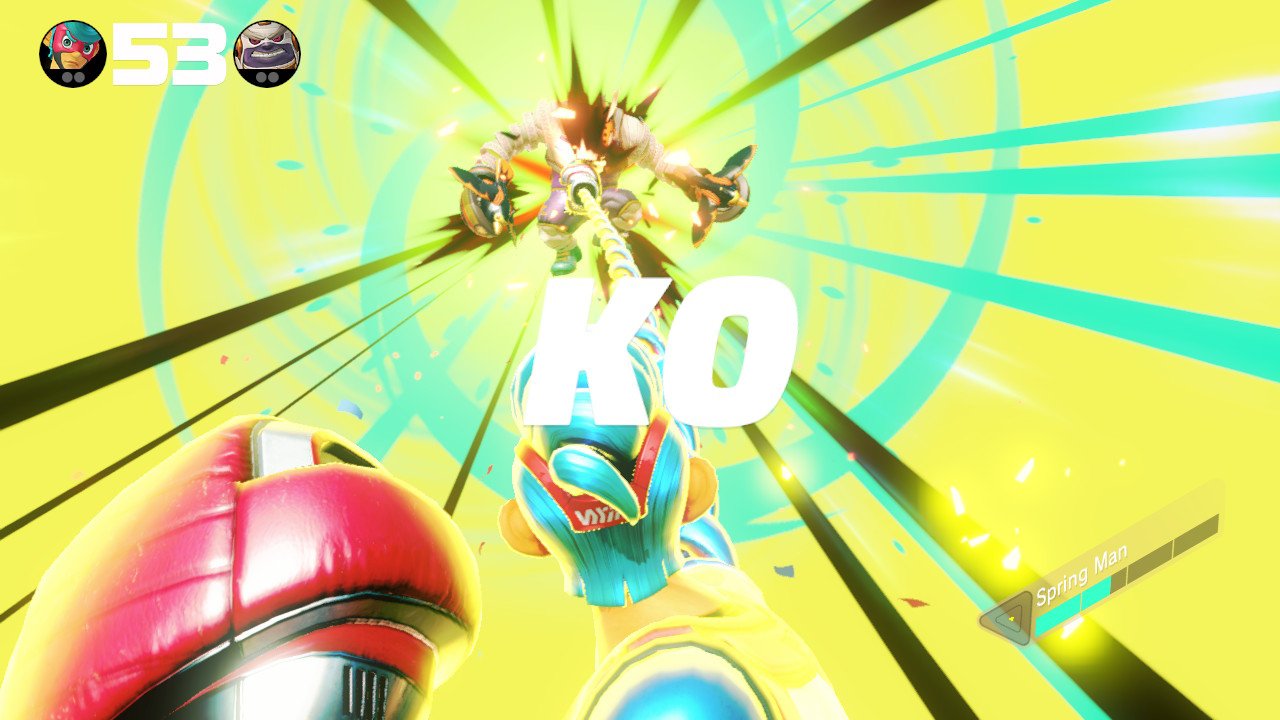 ARMS is a real tough one to score. The game has excellent presentation, an awesome roster of unique fighters, a great amount of strategy and all the gameplay elements to capitalise on those strategic systems in place. The problem is I became bored too quickly with fighting that makes up 95% of the gameplay. Toss in a strangely high difficulty that doesn’t let you ease into learning how ARMS plays in the beginning few hours and a lack of any engaging single-player content and it becomes hard to justify the full game price tag.

I encourage everyone to give ARMS a shot if you can as it no doubt earns at least that much,  but I can only truly recommend it if you fall in love with the core fighting mechanics and have aims to play heavily online.

A great shot at new IP for Nintendo with excellent presentation and online, though many will get tired of the surprisingly deep yet repetitive gameplay quickly and there isn't much content here to justify the price tag.
5.5