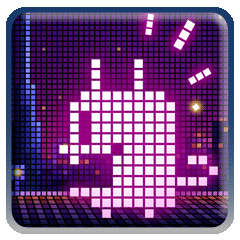 The Arkedo Series has been on the Playstation Network over the last few months with two games, JUMP! and SWAP!, both reviewed at Capsule Computers. The trilogy of games conclude with the latest release PIXEL!, a platformer about a pixelated cat. Although it adheres to the standard platforming formula, there are interesting and unique elements that divert it into a new direction. Its art style also offers some great looking visuals. The music is quite average, however, and the difficulty could have been tweaked a little. That should not deter the curious consumer to pick up this game. 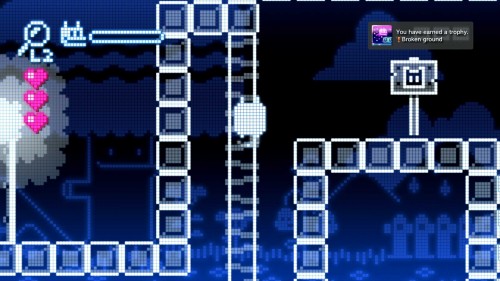 Gameplay
The gameplay of PIXEL! adheres to the same formula that has made 2D platforming a great genre to grow up with. A lot of the basic elements of the genre are present. Dominated by the act of jumping, the player will use this skill effectively as the player will jump across a variety of gaps and onto various enemies. Simple platforming mechanics. The cat can also sprint its way through the levels, another staple in the genre. The running mechanic works very well with the jumping mechanic, with the long jump very useful in certain situations. The controls are fluid and responsive, a must for any platformer.

What makes this game very unique lies within the L2 button. Pressing this and a magnifying glass will appear. Now, when does a platforming game ever have a magnifying glass? If you name one other than PIXEL! then I haven’t heard of it. So, what purpose does this magnifying glass have to the game? Well, if you encounter a ! box, then pull it out. Once you select it then you will be transported to a maze mini game, where the objective is to find the golden square within the abundance of grey and white square. At first they are simple but will get gradually harder. A time limit will keep you under pressure. Succeed and you’ll receive some treasure, such as restoration of your health. 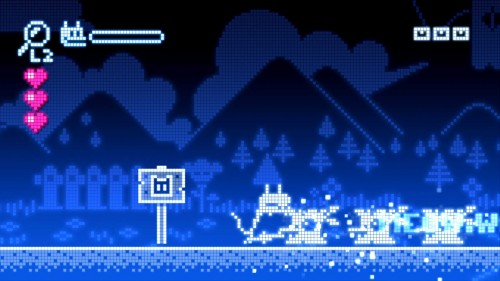 Yes, there is a health system in the game. Now, rarely one would see a health system in a platformer, but it is present in this game. The cat’s health is represented as three hearts, with enemies taking off at least half a heart when the cat is hit. So that means six hits and the cat passes into the next life. Every time the player dies, he or she must start at the beginning of the level, losing any progress they had made, unless they encounter a checkpoint. Another bar the player will notice lies at the top of the screen. This is a bar that charges your roar attack, stylised as a MEOW. It is charged by jumping on enemies. Defeat five and it will be fully charged. Press triangle and unleash the power of MEOW.

The difficulty of the game is where some disappointment will be felt. The problem is that it is a little on the easy side. Sure, I don’t mind the first few levels being easy to get the feel of the game, but this is a little too constant for my taste. The later levels should have been a little tougher in order for the player to be tested. However, this does not resonate to the mini games. Due to the time limit and the varying layouts, this is where the challenge lies. I suggest that, every time you encounter these ! boxes, do travel into them and challenge yourself to a great puzzle.

As a player, it really is an enjoyable experience. With great controls and unique elements, the gameplay keeps itself fresh while retaining the platforming elements that make the genre so great. The MEOW attack adds to the charm of the game as well. 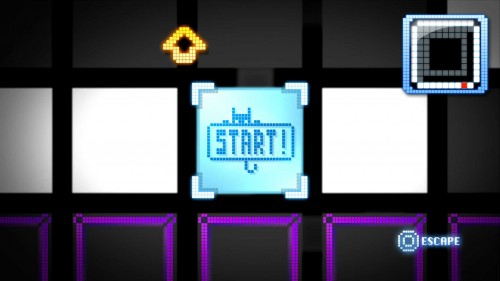 Visual/Music
The Arkedo Series all feature different art styles and PIXEL! is no exception. So, what did they take this time? It lies in the name. Our main character is pixelated as with the different environments and enemies. The rest of the game is very blue. Well… the background is the only thing left to describe, with elements of the background also pixelated. To be honest, this direction is quite charming. It also gives the retro feel a more modern look and a good one at that.

The music is a throwback to the retro days, which fits with the whole game. Although it is not one for the player’s collection, it still has its own charm to it. It complements with the game, both the art style and the interactivity. I still enjoyed listening to it, but if it ever had a soundtrack, I wouldn’t run out and buy it. 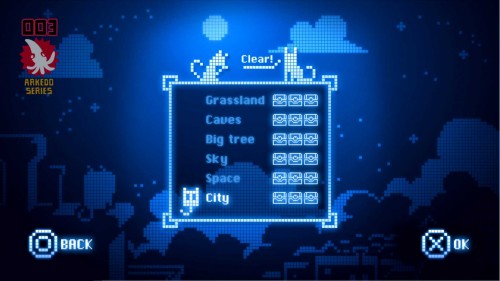 Overall
Despite the lack of a challenge, PIXEL! is a fantastic game. The gameplay retains the retro charm while adding some unique features and the art style adds to the charm. The music is enjoyable and has a nostalgic factor but isn’t something that will be memorable. On its own, PIXEL! is a game that fans of the genre will enjoy. Maybe not multiple of times but it is an experience that players will not regret.