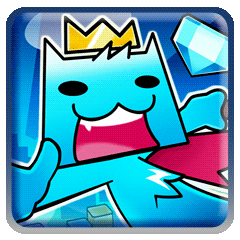 Arkedo Studio has returned to the Playstation Network with the second installment of the highly successful Arkedo Series. Entitled SWAP!, this puzzle game follows a binge drinking (milk, that is) cat on his quest to return to the grand castle through a series of colour matching puzzles, a far cry from their previous title, JUMP!. This twin stick puzzle game is challenging but exciting. The speed of the game changes and offers a few modes of play. The visuals are colourful and bright, while the music, although not memorable, fits the game well. However, the game does suffer due to its over reliance to the simplicity of its game mechanic and the staples that puzzle games bring. 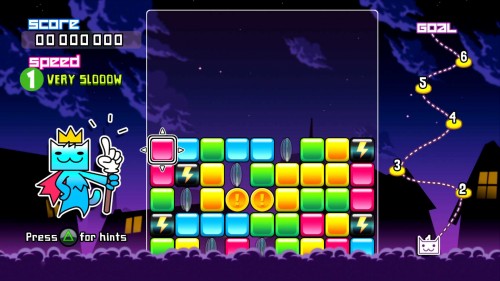 Gameplay
The gameplay can be described in one sentence: four match puzzle game. The core mechanic revolves around that style of gameplay. It is a classic formula that has never tried throughout the ages (Connect Four anyone?). It is also twin stick, the face buttons have no input in this game. The left stick is used to move the cursor around the blocks while the right stick swaps the blocks in any of the four directions. The controls work well and are quite comfortable. With the added fact that the blocks can move as far as they can without any repercussion, the quest for those points can seem like a breeze, if you know what you are doing. Power-ups are present in the game, including temporary halt of the blocks, as well as coins and treasure chests to boost the score. Combos, a staple of puzzle games, are also present.

The modes on offer are more numerous than that of JUMP!, but by only one. There is Castle Mode, which acts as the story mode of the game. King Kat, the protagonist, has had a night of binge milking and doesn’t remember the activities of the previous night. The story covers the journey home to his Castle, played out in five levels. These levels can be a challenge when the speed of the game increases to the higher levels. Then there is Arcade Mode, a never ending line of blocks with the simple objective of collecting points before a game over. Then there are the Challengers. Each challenge has a set objective, like doing a combo or achieving a certain score. The challenges are unlocked after the completion of Castle Mode, to keep the players coming back for seconds.

The mechanic is reliant on simplicity. Being a downloadable title, this is understandable. Many downloadable titles have hit it big time by sticking to the basics. I will mention Limbo as a prime example. It is basically a 2D platformer at its core but its art direction, storytelling and complementing mechanics made it a very compelling game. However, with the four match puzzle genre, there has to be a certain degree of originality or creativity so that the player wouldn’t turn it off and walk away. I don’t see it with SWAP!. Yes, playing the game was fun, but only when speed was a factor. With JUMP!, at least there was some sort of variation. Despite that, the gameplay mechanic should appeal to puzzle fans. 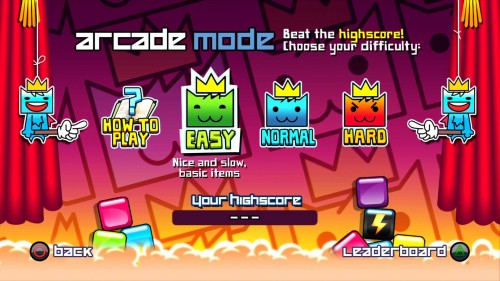 Visuals and Music
The visuals heavily differ from those of JUMP!. While JUMP! was based on the 8-bit era, the SWAP! art style tends to focus on the cute factor. To be honest, this was done very well. King Kat has this simplistic design but still looks cute. His expressions during the game reminds me of the facial expressions in anime, which I did enjoy. I even glanced at them during gameplay. The blocks are colourful and easy to look at, which is good considering that is all you will e looking at. The menus are well designed and fit the overall art style.

The music is quite generic and unmemorable. However, it does fit well with the game and some of the tunes are easy on the ears. Each of the stage music complements the gameplay, despite its generic tone. So does the main menu theme. Its cutesy aswell, so it blends in with the overall art style. Just don’t expect any sort of great music piece. JUMP! suffered the same problem. It was great but too generic. 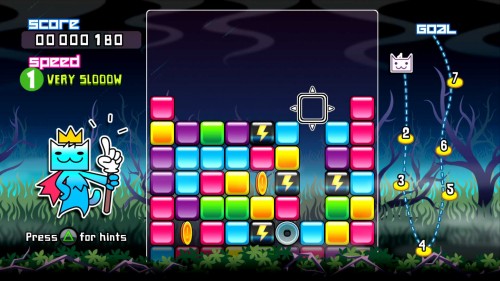 Overall
SWAP! is a great game. The gameplay can be enjoyable and fun and the visuals are colourful and cutesy, fitting the overall tone of the game. The music is not bad but not memorable either. The problem is that the mechanic is basic and it can get boring if there is nothing happening. Its over-reliance on the simple mechanic restricts the game to cross new boundaries that other downloadable titles manage to do. Its lack of original spin on the genre will make it fade into the shadows of already established puzzle games. Despite that, it is a well-built game with the tendency to have fun at times found. The higher speeds of the game will provide a challenge, testing your nerves and skill.