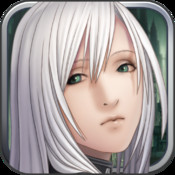 Overview
Ark of Sinners Advance is a game with quite a unique background. It’s a polygonal two-dimensional side-scrolling action-RPG. Originally released for Nintendo’s WiiWare, it has now been rebuilt for iOS devices, trading in a controller for a touch screen. It is also set in the Anima: Beyond Fantasy RPG universe. But how does Ark of Sinners Advance hold up in its jump to the iOS? Will it be absolved or are its sins unforgivable? Let’s find out. 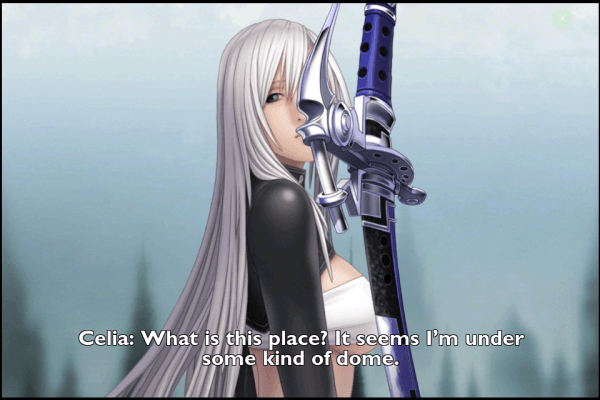 Story
Players take control of a young white-haired lady named Celia. When she wakes up, she knows only that she is in a strange place and that her friend Nemo is missing. With nothing but a sword, hyper-sexualized fetishist clothing, and some help from an unnamed harlequin, she sets out to explore her new surroundings and find her friend.

Gameplay
Ark of Sinners is a fairly straightforward side-scrolling action roleplaying game. You’re given only a small set of on-screen buttons to contend with. These will let you move side to side, jump, and perform two styles of attack with your sword. It’s great to see a game know the limitations of its platform. The button layout serves its purpose well without overcomplicating things with on-screen joysticks and the like.

Even with the well executed simplicity of the controls, the gameplay is pretty rough around the edges. You will be doing quite a bit of platforming as you explore the Ark. The problem is that jumping in Ark of Sinners is slow to respond and floaty once you’re airborn. You can expect frustrating, unresponsive jumping to be the cause of more than a couple deaths in the game. 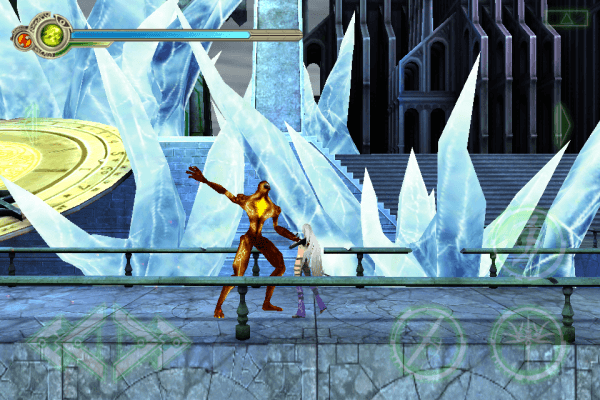 To its credit, the combat in Ark of Sinners is much more responsive than the jumping. It’s rare that you’ll die in combat due to issues with control. Unfortunately, combat is largely uninteresting. It generally boils down just repeatedly whacking the attack button until everything is dead. That’s a shame, too, because it’s clear a lot time and effort went into the skill system that augments your combat skills so heavily. Enemy design is also pretty boring. You’ll fight one type of shade over and over before moving onto the next type of shade. There is some variety to be had, but only a few encounters in the game feel genuinely refreshing.

The skill system in Ark of Sinners is fairly interesting and makes it feel like you really are being rewarded for collecting Lost Time Memories (blue orbs hidden throughout the game). You can earn new skills and upgrade stats. While these give you some interesting new things to toy around with in battle, it doesn’t change the repetitive nature of the beast. 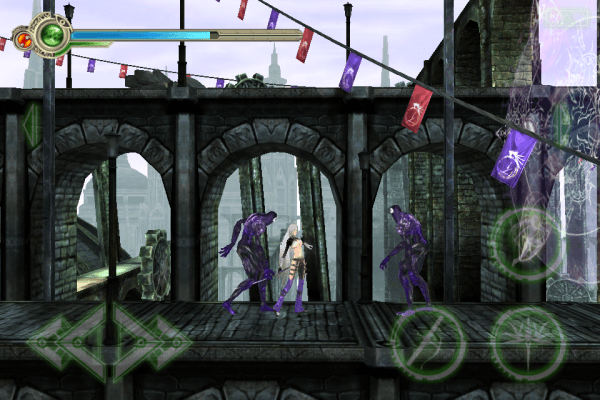 If uninteresting combat and troublesome platforming weren’t enough to deal with, occasional frame rate stuttering won’t help either. There’s nothing more frustrating than fighting with the jumping controls and finally getting up to the platform you needed when the screen stutters and you fall all the way back to the bottom.

Seeing how heavily sexualized the protagonist, Celia, is should raise some eyebrows as well. It’s overbearing and unnecessary, with many of the single-frame cutscenes focusing on her “assets”. Though it’s almost par for the course in media today, this feels boorish and harmful to the overall game. Character design should have avoided leaning on a sexual crutch and spent more time fleshing out the story. 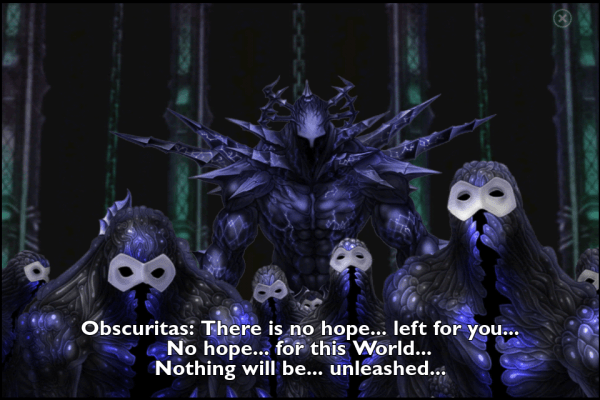 Visuals & Audio
The visuals in Ark of Sinners Advance are fair, though they do nothing that will break the mold. The backgrounds in the world do a great job conveying the sense that Ark is, indeed, a vast city to be explored. Also, the hand-drawn cutscenes look great, much like something from an anime. Otherwise, enemy design feels fairly bland and, as previously mentioned, Celia’s design could use a more conservative overhaul. The end result is a visually mediocre game with flashes of brilliance in the large outdoor environments.

Musical tracks in the game provide a good sense of urgency and bewilderment, playing heavily on the strings and horns of a classical orchestra as well as occasional operatic vocals. The other audio is serviceable but nothing more.

Overall
Overall, Ark of Sinners Advance is an action-RPG with some good ideas that ultimately fails to deliver. Some glaring gameplay and design issues really hamper what could have been a genuinely interesting experience. The music in the game does a good job conveying urgency and bewilderment. Otherwise bland audio and visual design do nothing to pull this game up from its mediocre story. At the end of the day, Ark of Sinners Advance just comes up short.