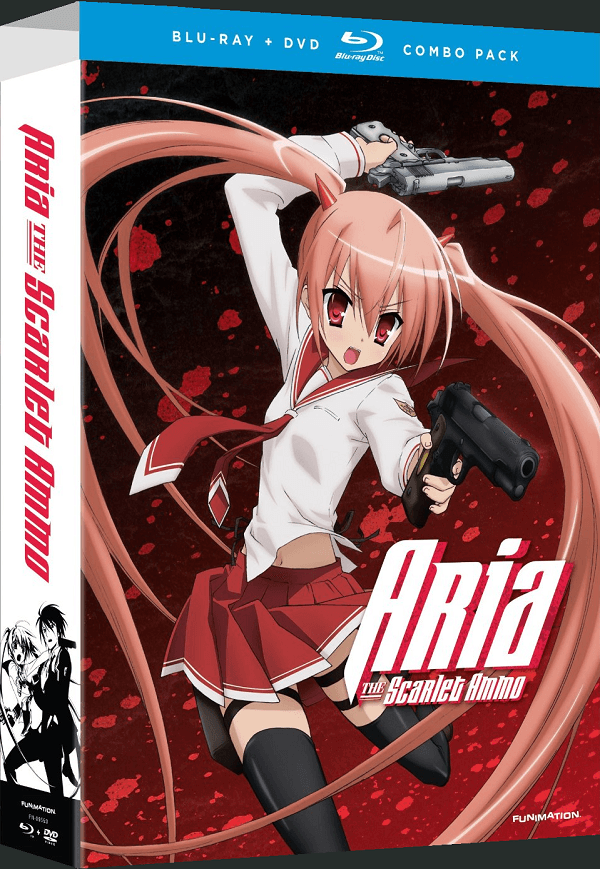 Overview:
Often in the anime world there are female characters which are designed to be not only exceptionally strong but also small in both stature as well as other areas which are then used as a running joke throughout the series. Such is the case with Aria the Scarlet Ammo. The series is based off a series of light novels written by Chūgaku Akamatsu that began in 2008 and is still going today. The series was given an anime adaptation last year and now FUNimation has brought it to North America. Does Aria the Scarlet Ammo succeed with this well-used formula and become something worth watching? Let’s find out.

Story:
In an alternate version of Japan there is a special school that would appear similar to any other school in the world. However the students at this school wear bullet proof uniforms and carry guns and swords around the campus. The reason for this is because the school trains what is called “Butei” and these Butei are then able to take various jobs all over the world for payment, basically as modern day mercenaries. 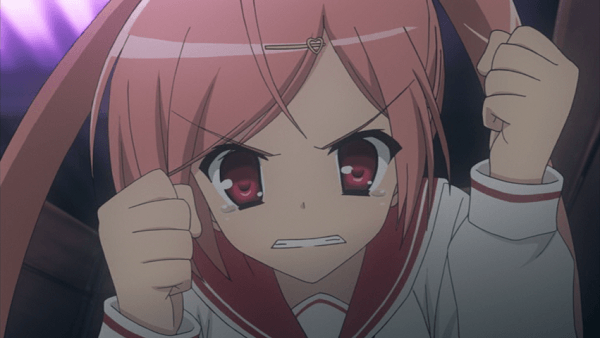 One such student at Tokyo Butei High is Kinji Tohyama. He may be a rather simple student but one day on his way to school he is targeted by a mysterious killer that has been targeting students at his school in an attempt to kill them.  While Kinji is in this tight spot, he is suddenly saved by a girl that literally drops out of the sky to save him, albeit squishing his face into her chest in the process.

This girl is none other than Aria Holmes Kanzaki, a girl that happens to be half-Japanese and half-British and has just transferred from Europe to the Butei academy in Tokyo. With an impeccable record of always catching her target, she is considered one of the best Butei around. After initially being saved by Aria, the two quickly fall into a deadly situation, backed into the corner by the Butei Killer’s machinations.  However while Kinji may look like a standard student and a low-ranked Butei, he has a unique ability that increases his abilities top nearly super-human levels. 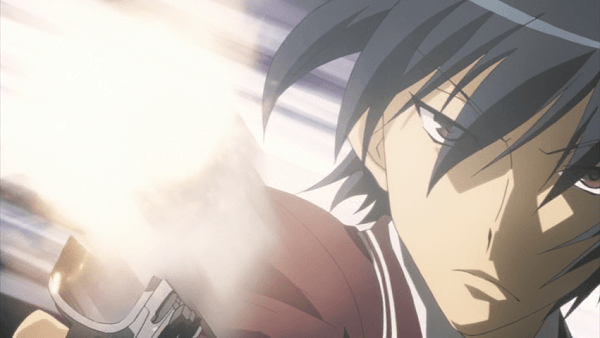 He calls this mode, “Hysteria Mode” and when he manages to eliminate every threat in less than a second, Aria sets her sights on making Kinji her partner. However there is a catch to Hysteria mode and that is the fact that it can only be triggered when Kinji is sexually aroused by a woman. Nevertheless Aria is dead set on making him her partner, or slave depending on how she happens to feel the time, as she needs help in order to track down not only the Butei Killer but others who are responsible for framing a dear family member for inexplicable crimes. Will Kinji be able to team up with the hot-headed Aria and survive the threats thrown their way? 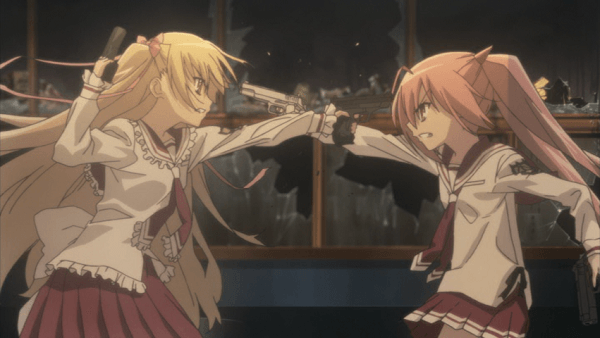 Now Aria the Scarlet Ammo may start off as a rather standard high school romantic comedy with action only present when Aria starts flipping out, it quickly evolves into a show full of action, mystery, supernatural abilities, bloodlines and even a harem to top things off. It seems that when the author began the story as an romantic comedy with guns and eventually decided to throw in a whole slew of references to historical figures, then take them absolutely nowhere within the span of the series, as barely anything introduced throughout the series actually plays out and little is resolved by the time the final episode wraps up.

Now while the plot may be nonsensical at best, the series does have some rather interesting characters. Kinji is actually a well-written character for a male lead in a harem series. Not only is he conflicted with the fact that he is a Butei, but he is hesitant to use his Hysteria Mode. Plus he is not blind to the feelings of those girls who start to flock around him, even though he still tries to avoid certain situations that only seem to make them desire him more. 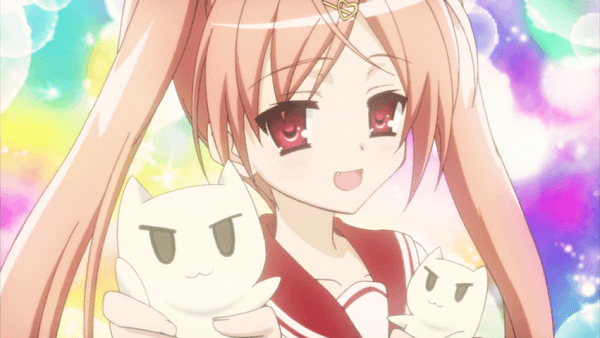 That being said, every harem anime has certain types of female leads and Aria is the classic tsundere of the group and often her reactions are some of the most comedic moments of the series, outside of when one of the other two girls make their advances on Kinji. Outside of her, there is a girl that fills the flirtatious role and the innocent-but-obsessed is also provided in the series. Each girl receives a third of the season with character development and it is nice to see each girl receive some backstory and expansion rather than simply eye candy.

Visuals:
While the backgrounds in Aria the Scarlet Ammo are high-quality and the animators managed to pull in some rather impressive quality on the action sequences in the show, there are a number of issues which plague the series throughout all thirteen episodes. One of the biggest problems is the fact that the character designs fluctuate greatly outside of action sequences. Their expressions are often bland and depending on the angle their faces will be oddly angled. 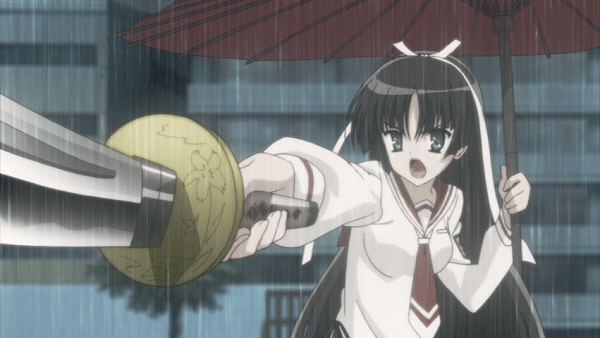 This is very unfortunate because, as mentioned briefly before, Aria the Scarlet Ammo is actually a gorgeous show when the animation and artwork come together. Action sequences and, oddly enough, the fan service scenes, are always presented in high quality and are beautiful on this Blu-ray/DVD release.

As far as fan service goes, the series does contain some but nothing overly offensive. Considering the fact that Kinji has to be sexually aroused to enter Hysteria mode there are a number of panty shots and also scenes of the various girls in only their bras or see through clothing. This means that there is no actual nudity here so those who are uncomfortable with fan service should be able to tolerate the show while those who enjoy fan service will still be pleased with what is found in the series.

Audio:
As one would expect, FUNimation has released Aria the Scarlet Ammo with both their new English dub as well as the original Japanese voice track. Now fans of anime will be interested in hearing that Aria is voiced by the well-known Rie Kugimiya in the Japanese track so if you happen to be a fan of her work then she easily fits into the tsundere roll that is Aria. 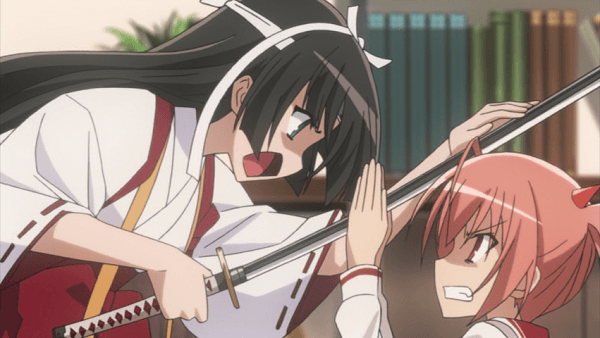 Now the English voice actors are not slouching on the job either as the English cast has provided a rather excellent dub for Aria the Scarlet Ammo. Leah Clark does a good job with Aria’s voice work and provides a suitable replacement for the memorable voice work of Rie while Luci Christian also provides a stellar performance with Riko. That being said, Todd Haberkorn’s work with Kinji is hit and miss at times when the character enters Hysteria mode.

As far as background music goes, Aria the Scarlet Ammo has quite a stellar soundtrack to go with the action portrayed on screen. There are numerous audio tracks which are played throughout the various action sections of the show and these all accentuate the events on screen well. Also it is worth noting that the opening song, “Scarlet Ballet” by May’n is an absolute treat to the ears while the equally enjoyable “Camellia no hitomi” by Nakano provides a suitable closing to each episode.

Extras:
As far as bonus content is concerned, there is very little to be found in FUNimation’s release of Aria the Scarlet Ammo. There are your standard inclusions such as the original Japanese promo video and commercials, a trailer that was shown in the US, trailers for other FUNimation releases. It also contains clean versions of the opening and ending songs, which are quite a treat considering how great these songs are. 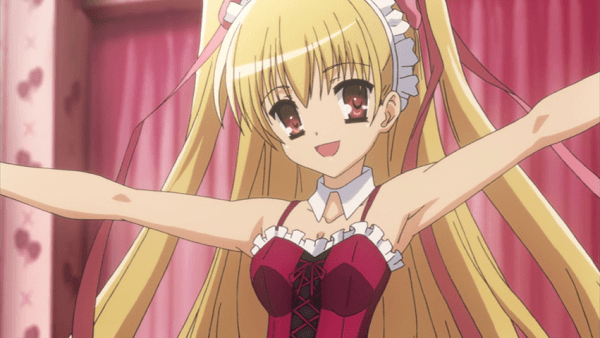 Outside of those standard inclusions there is also audio commentary for two episodes in this release. Episode 4 features commentary from Luci Christian the voice of Riko and Todd Haberkorn which is the voice of Kinji. These two discuss their various work with the characters they are voicing including how they are portraying them, such as how Luci handles Riko’s various facades.

Episode 6 also has been given commentary and this time around Zach Bolton, the ADR director, Leah Clark the voice of Aria and Todd Haberkorn are providing the commentary. The two voice actors discuss the genres they prefer working on and how they work on establishing their own character’s voices, such as the subtle differences in Kinji’s normal and Hysteria modes. Both of these commentaries are amusing to listen to and a nice inclusion in the limited bonus content.

Overall:
While Aria the Scarlet Ammo isn’t a bad series by any means, it is held back by a number of issues, which is simply a shame considering Aria the  great set of characters that round-out the various harem archetypes with fleshed out characters with personality.  Unfortunately they only help make the story of the series tolerable given how slapdash the story can be at times. While there are plenty of comedic moments and the action in the series is top-notch, the lack of consistent quality outside of these action scenes only make for a starker contrast on how bad some of the scenes appear, summing up the series perfectly. Aria the Scarlet Ammo may have moments of brilliance; it is unfortunately brought down by poor quality care and a sub-par story.