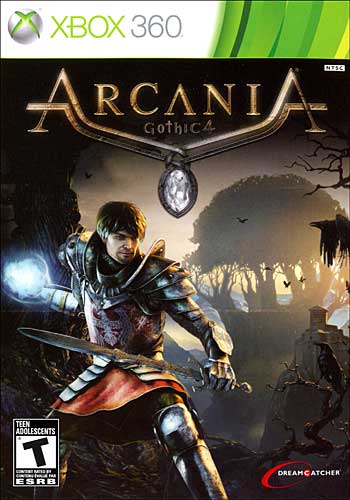 Overview:
Over the past decade Gothic has always had a distinct crowd of PC gamers that were die-hard fans. Piranha Bytes had been keeping together these RPGs that, while not always very popular, always had plenty of fans. Now however the fourth game is in the hands of Spellbound and JoWood and does it keep together the hardcore experience fans always loved when it arrives on the Xbox 360?

Story:
Gothic 4 places the player ten years after the events of Gothic3 in the land of Myrtana. King Rhobar III who used to rule the kingdom fairly has become ill with a type of madness that transforms him from a standard ruler into a bloodthirsty tyrant. This all begins before the player even has a chance to step into their role as a peasant sheep herder.

The player takes on this role as a simple man who occasionally dreams of adventure but is all set to settle down and have a wife and child. Everything is peaceful in the isle of Feshyr, the player goes through the standard tasks done by a working village man, lasting just long enough to make players wonder when the action will begin. That is until Rhobar’s troops show up and spoil everything by burning down the village and killing his fiancée. Thus begins the tale of revenge for your village and loves ones, and maybe on the way free the kingdom from Rhobar’s rule.

While it won’t win any awards for story, Gothic 4 sets itself up beautifully for what players have come to expect from the series. A bleak beginning with nothing to turn back to, only the grim future that awaits the main character. This would have at least been a bit more striking if the player could name their character in any way, or customize them but I digress. The story is exactly what RPG fans are looking for in their fantasy RPGs, especially when it comes to the Gothic series.

Graphics:
Vast open world seeming RPGs require a great looking world to explore otherwise it defeats the purpose of giving players the drive to venture around. Thankfully Gothic 4 delivers in this category. The areas that the player explores are very large and intricate. With large castles in scenic settings, to forests that just scream danger Gothic 4 at least knows how to set the feeling at a distance and at times is quite breathtaking; bordering on realistic. 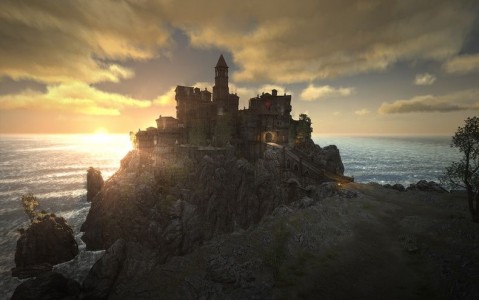 This changes however after the player begins to actually explore said forest. This is because the frame rate constantly flakes off during combat or even more complicated looking areas. When seen close up the character models only end up looking strange and unbelievable and in some cases can confuse the player with what the gender is of the NPC that they are actually talking to. Plus remember that forest I mentioned before? Well as you get closer to that forest you will notice the more intricate details disappearing for better performance. Meaning instead of objects popping in, or texture draw; we have objects completely popping out and vanishing.

Sound:
The soundtrack is limited at best and the majority of what you will be hearing as far as background music goes is when you enter into the menu screens. These orchestral tracks are enjoyable for those who like that type of music (such as myself), but otherwise don’t step too far outside the box when it comes to normal music during combat and simple exploration. Even with music abruptly halting for no reason at times.

To its defense though, Gothic 4 has quite a large array of voice over work that would end up being played over the background music. This voiceover work though is inconsistent at best. There are times that you will go from one extreme to another. A very serious scene, wherein the entirety of the plot is branched from contains dialogue that is very cliché at best, but performed well enough to not seem as bad. Then a few minutes later with another character, the voice work becomes over-the-top and completely unbelievable. It also doesn’t help when the subtitled text reads completely different than what is being said aloud. 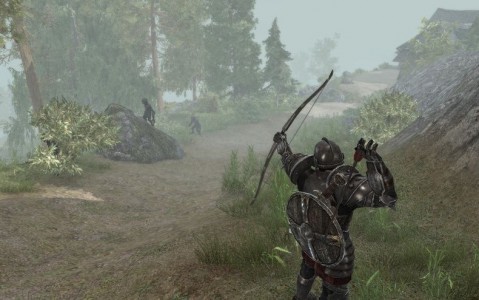 Beyond the voice work however the game sounds just fine, bow shots twang like the best of them, swords clash and pierce flesh and magic soars through the air. All in all as long as you stay away from the characters it sounds well enough, but alas much of the game requires involvement with different NPCs whose voice work shifts from believable to questionable between a few phrases.

Gameplay:
Gothic 4 is a third person hack and slash RPG. Combat is controlled via the face buttons on the controller in real time. The D-pad contains four different items, weapons, and spells that you can hotkey for quick use if you decide that you will need them for your fight. There is also your standard lock on LT and spell casting and selection on the RB button.

Everything is handled in real time except for when the player enters the menu screen. This menu screen pauses all action on the field and allows the player to use any healing items or buffing items that they choose to use, which sometimes makes fights one sided with the numerous amount of consumable items within the game itself.

There is little to no customization within the game outside of the level up system. Players will be able to customize their hero with skill points received from level ups, which can be attributed to things such as increasing your combo ability, your magic, ranged ability, and a handful of other statistics that are quite strange to see and will be confusing to even the most battle tested RPG fans. The actual skill points themselves are broken down into skill trees but are thankfully non-restrictive. Meaning you can choose to specialize your character to become any variation you want, or a combination of the two. 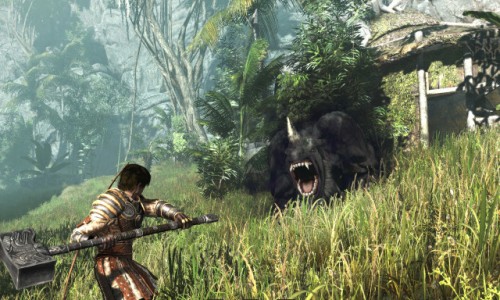 Outside of killing everything that happens to be breathing and in your path there is also the ability to craft items and perform alchemy. These are great ways to kill time within the game and create some powerful items with combinations of what you can accumulate from dead enemies and the world itself. These skill trees, while not combat oriented, are great to explore and sometimes practically unavoidable due to simply wanting to explore the amount of options that they provide.

This only becomes more apparent when you realize that the world is full of different ingredients and materials that can be alchemized and crafted to make your character stronger, or give yourself an edge. This is doubly true as far as enemy loot is concerned. Enemies will drop plenty of items that seem to level as you do. You won’t be finding too many items that are out of your reach from the enemies that you kill; instead you may be eagerly waiting to see what type of bonuses you will get out of your next confrontation.

And what a confrontation it can be. There are times in Gothic 4 where the player is accosted by countless enemies to beat back and destroy. These enemies don’t believe in Gentlemen’s Rules either, they are more than happy to rush in all at once to bring you down. This can lead to being mobbed by enemies quite often, but only gives the player a chance to test out their new weapons and spells on.

Players are also given two choices to venture around the world of Myrtana; by either walking around or teleporting using the point teleportation system. While teleportation is the fastest and most efficient way to travel, it does not help as far as quests are usually concerned. This is because quests are not marked always where they should be, or none at all, meaning that players must venture across the landscape simply to finish the quest. Though this is a benefit most of the time due to the fact that teleporting around can cause the player to miss items that they otherwise would have passed over blindly.

The game itself performs quite well, but the story progression and quests is where players will become extremely frustrated. That is because there is a more than usual amount of quests that are simply fetch quests or delivery quests. These are so numerous it will feel that the player is more of a mailman than a hero bent on revenge. When quests do venture outside of the delivery aspect there isn’t much variety there either, with most objectives being solved with a sharp blade and a powerful spell. 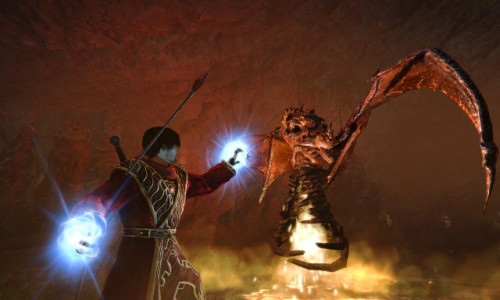 One aspect of these more story driven quests however, is that there are certain choices to be made as you venture along. Should you support one side or the other and how will it affect your quest in the long run turn out to be quite popular. These quests can vary from being extremely convincing by giving the player a decent amount of backstory and information about what they should do, or can squander into deliver this letter to the other side of town.

It is quite sad that there isn’t more quest variety as Gothic 4 is quite long. There is plenty to do in the world of Gothic 4, but unfortunately a lot of it revolves around said fetch quests and it quickly becomes tiresome. Though on the bright side the main storyline itself reaches upwards of 15+ hours on its own, and if you have the patience to handle the side quests then it can almost double your play value.

Overall:
Arcania: Gothic 4 does plenty of things well, but unfortunately sticks true to its standard looting and quest grinding methods which have become tedious over the years. While it is a more than suitable Medieval Fantasy RPG with lots of gameplay to offer, Arcania: Gothic 4 does little to step outside of the box and expand upon the standard formula.