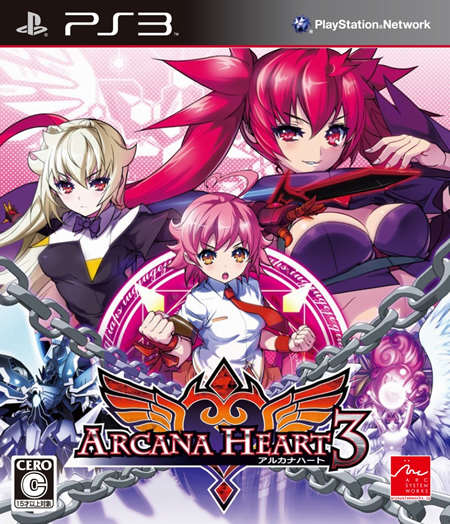 Overview:
Out of people you could ever could pick a fight with which one would you least want to fight? Maybe a wrestler, bouncer, or even a kung fu master? In Arcana Heart 3 for the Playstation 3 your worst fear is a group of girls who aren’t afraid to throw down. Don’t go asking these girls to go into the kitchen and make you a sandwich because that sandwich will be served with your ass handed on it. EXAMU, Arc System Works, and Aksys games presents us with a great 2D fighter with an all female cast. I can say for Arcana Heart 3 these girls are made of sugar, spice, and everything fun. What makes this game great find out in our review.

Story:
So the story is well a bit complex as to be expected with these anime fighters but let me try to break it down for everyone. Japan is in big trouble as it is about to be destroyed in six days and the player must collect the six stones in order to prevent this from happening. Story is told with original Japanese dialog and English subtitles which should please most crazy hardcore anime fans. The story also follows after the the events of the 2nd game which was not released outside of Japan. 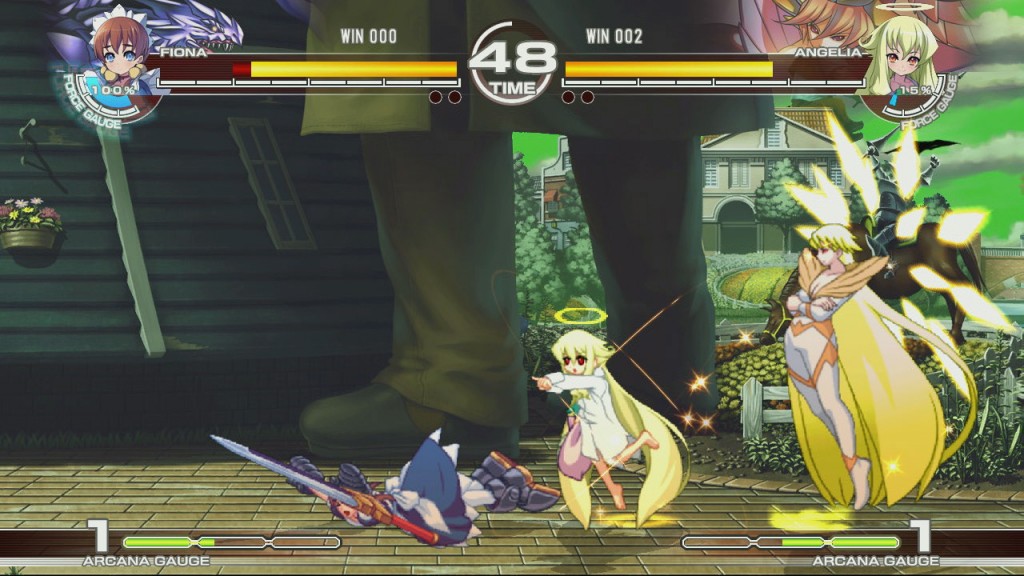 The story is told in a typical fighting game fashion where you will have some small conversations before and after fights that really don’t move the story along also nothing at the beginning of story mode really explaining what is going on other than seeing a character talking about reviving something. If you are a fan and follower of the Arcana Heart universe then there maybe some enjoyment for you in the story. Arcana Heart 3 has some interesting characters that could have been really explored more and that is a little disappointing.

Graphics and Sound:
Arcana Heart 3 is a 2D fighter with drawn sprites and backgrounds. I really love the characters and art style. The character design has a little of everything you come to expect from an anime fighter and it gets pretty wacky. You have your typical school girls, chicks with guns, martial artist and then you get into the whacky side of the roster where its a girl in a bunny hat piloting a mech, girl swimming in a giant blob of water, and even a a drawing of a green monster drawn by a little girl to name a few. Characters animate really well and it is very smooth with no slow down.

Backgrounds look really nice and have nice detail in them. In Arcana Heart 3 there is a dimensional rift and that causes the backgrounds to change, you can have seasons change on you or ghost appear in the background. The only thing disappointing to say about the backgrounds is that they are very static and don’t move at all. It seems that they used a fade in and out when transitioning backgrounds. Wish there was a little more work put into it. There is no real animated cutscenes just graphics with voices dubbed over them with the character graphics sometimes changing, which is a bit of a let down.

A very nice feature is that you can play the game with original or HD graphics. On top of that you can choose to play the game in the original 4:3 format or you can stretch it to a widescreen 16:9 format. Thankfully if you decide to play in the 16:9 format it still looks great and doesn’t seem to look or have any jaggy edges. Graphics over all look great just wish those backgrounds had a little more life to them just like the cast of the game. 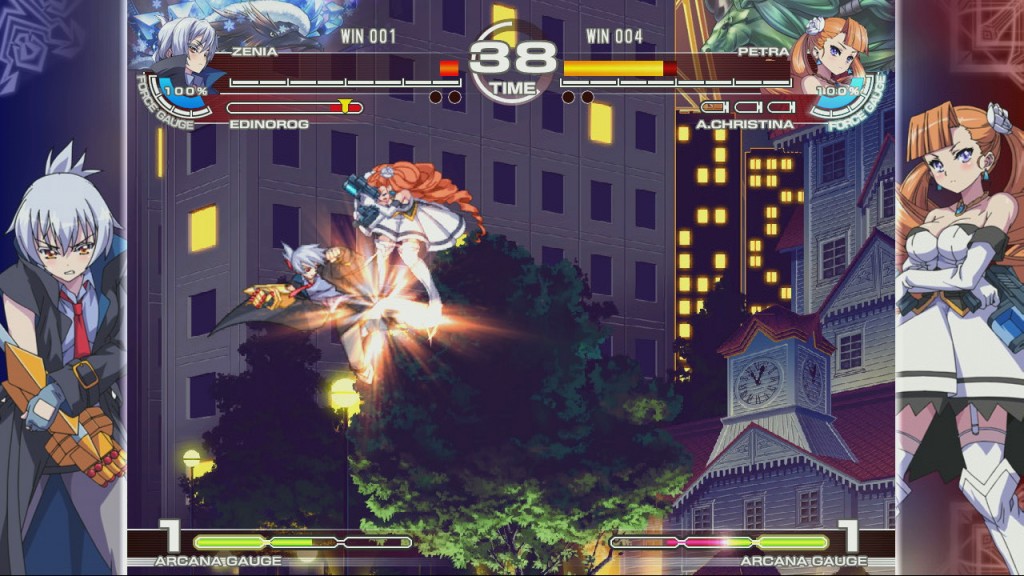 I really enjoyed the soundtrack to Arcana Heart 3. While it is nothing that really stands out it has a few good tracks and fits well. The voice acting is all Japanese with no option for an English language track which will be alright for most although a few may not care for that. Over all its pretty standard.

Gameplay:
This is the part where Arcana Heart 3 shines is in its gameplay. You have five buttons, three of those are attack buttons, one is a homing button that allows you to quickly fly toward your opponent at fast speeds and the other button is to be used with your Arcanas. If you are new to fighting games don’t worry as there is a simple mode which is similar to that found in Marvel Vs. Capcom 3 where some buttons will automatically do combos for you. The fighting is fast and responsive. Its easy to chain combos together and experiment with. Each character stands out from one another and there are no two characters that play alike. There are 23 characters to choose from.

The Arcana system in Arcana Heart 3 is what gives this game depth and helps it stand out amongst the Street Fighters and Blazblues out there. Arcanas can be chosen with your character and they add attributes and moves to your characters roster. With 23 characters and 23 Arcana to choose from you can have almost endless possibilities with the roster. It is also really cool to summon your Arcana and watch it take out a good chunk of your opponent’s life. Don’t worry you really can’t spam this but it can be useful if you get stuck in a tough spot.

Arcana Heart 3 features plenty of game modes. You have the story mode which plays like the traditional arcade mode in most fighters but it allows you to choose out of a selection of five or two if your at the half way point of characters to play against. This can encourage multiple play throughs and try to see what would happen if you ran into one character over another. After you go through and fight through the ladder you will fight the final boss which is really tough and pretty cheap. For me I don’t mind that in a boss fight since most of them have been pretty dumbed down as late. 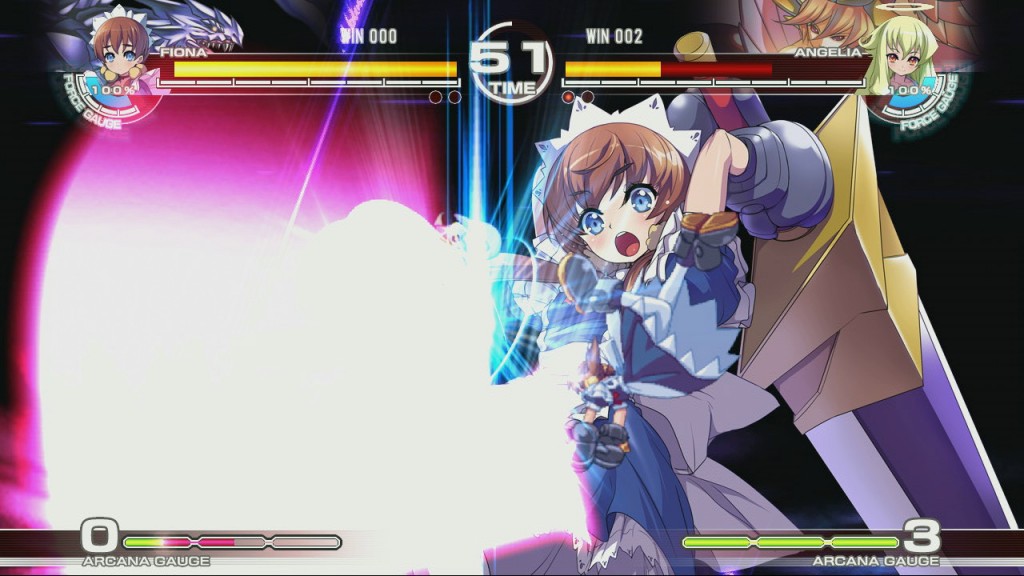 You have a score attack mode which is really similar to story mode except its a straight ladder of opponents which get much more difficult as you progress. What is interesting and maybe the most frustrating is that there is a special boss for this mode. Parace is one of the most difficult and cheapest bosses out there. If you think the story mode boss was crazy this is worse. She will throw these glowing orbs at you and keep hitting you non stop with devastating attacks. This will defiantly test even the most hardened of fighting game players. She has been beat by many so if you put enough time and effort into it you should come out on top. At this time I have yet to beat her myself.

If you prefer your players to be that of the human persuasion then you can play locally with a friend or take it online. I want to thank Arc System Works yet again making a great fighter that plays amazing online. Very rarely I have had a bad online connection and even if it does slow down it quickly tries to correct itself. Players who love to show off their skills can save their matches and share them online. Also there are leaderboards and a gallery where you can take a look at game artwork and animations.

Overall:
Arcana Heart 3 shows it has a fighting game not only has heart but its own soul too. From a presentation and story stand point it isn’t the greatest but what it lacks in those areas it exceeds as an excellent fighter that adds an extra layer of strategy on top. 2D fighting fans who want a little something new should definitely pick up Arcana Heart 3 on PSN. You can get it right now for only $30. Also thanks to Aksys Games for providing the code to review this title.