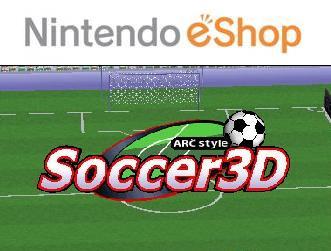 Overview
When you think of the eShop, you think of platformers and addictive little puzzle games. Yes, there are a few sports titles on the service, but none have ever been too eyebrow raising or worthy of much mention. To shift the tide a bit on the genre, Nintendo have release Arc Style: Soccer 3D, exclusively for the 3DS’ downloadable service. Along with 3D visuals, this title also brings about a ton of customization and cutesy graphics that give the game a pleasant, yet silly appeal. Does this balling romp shoot a goal, or should you just stick with the retail offerings on the platform for a more fulfilling soccer fix? Here is my review for Arc Style: Soccer 3D. 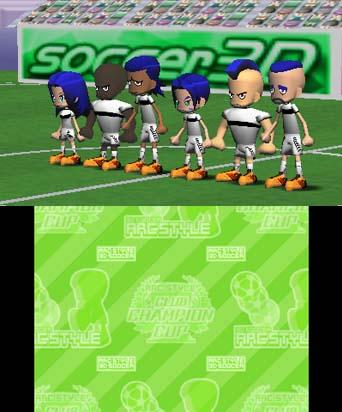 Gameplay
When you look at the raw, core product of Soccer 3D, there isn’t a lot there. Single player has two modes – Exhibition and World Tournament. Exhibition is as you would expect, and lets you go head to head with another team until the timer runs out, with the victor of course being the team with the most points. World Tournament plays nearly the same, but has the player take on the default World teams one after another, until a champion is crowned at the end. Yeah, it’s your standard fare for the sport, but thankfully the controls are solid enough to provide a good deal of entertainment, even if it is just for short bursts. 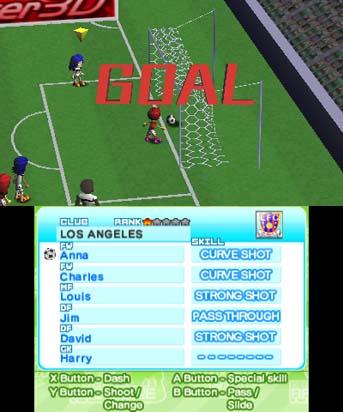 Speaking of movement, it’s quite easy to hop in and instantly catch on to the control scheme, as everything is pretty basic. Players run with the slide pad, which effectively moves your character around the field, and use the face buttons to perform their techniques. Passing is done using the B button while on offense, and other inputs offer a small variety of other techniques such as dashing and performing charged or uncharged shots to knock the ball into the goal. A special maneuver can also be performed, which allows for one big burst of energy to be put behind the ball in order to make a goal. Defense keeps the simplistic swing of things moving along as well, with slides and the ability to change players done at the tap of a button. Now, one could argue that there isn’t much depth to the gameplay due to the accessible nature to it all, but that seems to be the general concept of Soccer 3D. Instead of intense competition, this is the soccer game you play to simply relax.

That simplicity does come at a bit of a cost though, as the opponents AI for the single player modes could have definitely seen more attention. Half of the time, the opposing team spent a good portion of a match just running around in all directions, as if they didn’t know what was going on. When my foes finally did try to play the game and go for a goal, it was right back to their “zombie land” state afterwards, playing endless games of pass the ball until our team was back on offense. This isn’t a crippling flaw by any means, as you are still performing the same objectives and there are moments when you do have to step up your game, but those looking for something with a true challenge are sure to feel disappointment before the first timer runs down. Luckily, there is a local multiplayer mode in tow that lets players go up against a real competitor and test out all of their own special play-styles. 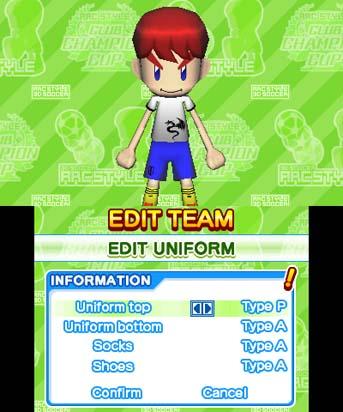 The core game may be where the meat of the game is, but the delicious seasonings come in the form of customization. Players can create their own team from scratch and craft every detail of their team, from appearance to techniques. Want to make a team of rabid kindergartners or tall, bald businessmen? Well, you can. The color choices are very broad for both hair and eyes, and these Mii-like personas become much easier to love when you get to add your own little charms into the mix. Even the names of each individual teammate can be changed, which allows the player to then have complete control of who they want out on the field. 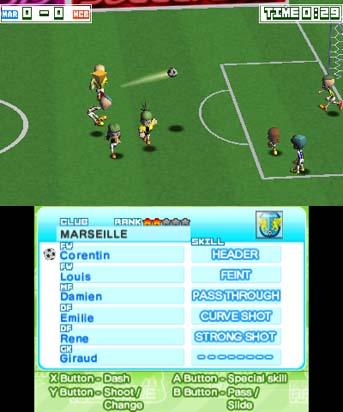 This editor also provides customization for abilities as well, which allows each member of your team to feel different from the next. My personal favorite of all these options though comes with the use of the 3DS’ built in camera. In just a few, short seconds, the player can snap a photo and then paste their own face to one of these custom characters. We have seen this before in Photo Dojo (which allowed for a full body image to be captured), but having a squad of you and all of your friends and family is definitely a fun addition and one that makes Arc Style: Soccer 3D stand out among all the other sports games currently available on any handheld.

Visuals/Audio
Even though “3D” is in the title, I preferred for it to stay off for a good portion of my playtime with the game. It’s not that the effect is poorly implemented – it’s just unnecessary. Even with the slider up all the way, I got little satisfaction from seeing these subpar models in 3D. You see, the presentation is decent, but the models themselves are a bit generic and blocky. Yeah, this is partly the art design for the game at fault, but the 3D seems to just make every flaw stick out. With that said, I didn’t hate the appearance of the characters and seeing the goofy “macho” and “runt” characters battling for the ball is a charming affair, but one that is better enjoyed without the extra dimension of gimmickry. 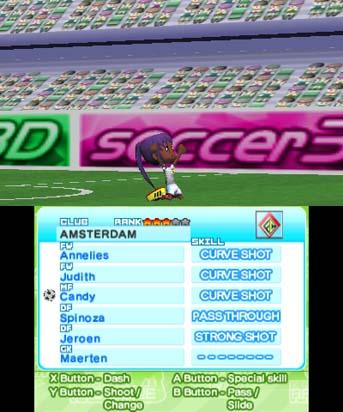 As far as music goes, small, catchy tunes make up a cheerful and “fun” little soundtrack to play to, which captures the lighthearted atmosphere well. None of these tunes are masterpieces by any means, but they certainly can be earworms and in a matter of time, you will be humming along as you run down the field to make a goal. One missed opportunity however comes in the lack of voices for the game. I know there shouldn’t be dialogue in a game like this, but little squeaks or signs of audible life would have worked really well here.

Overall
Arc Style: Soccer 3D isn’t an amazing soccer game by any means. The main game is pretty bare bones and delivers just enough of the sport for fans to enjoy. The one-sided single player mode means there isn’t a lot of challenge, but younger players are sure to love how accessible and easy the game is to actually play. The customization aspects however are enjoyable and can be fulfilling to either party, allowing one to spend hours conjuring up teams and letting their imagination run wild. Is Soccer 3D the next Fifa or Wii Sports? No. It is a charming little game with some interesting features though, which makes it easy to recommend for anyone wanting some simple soccer on the go.