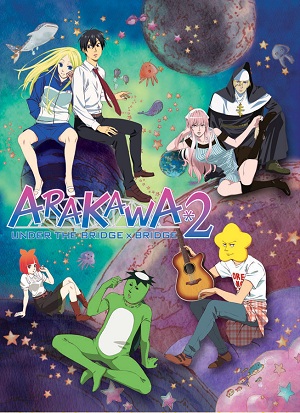 Overview:
Normally when you look under a bridge you will find a number of things there. Most of these things will be garbage, some stray animals, somebody living there or if you happen to live in Chicago then maybe even some body down there instead. However one thing you wouldn’t normally find is a blossoming community full of strange people with hilarious personalities.

You see, under a bridge that spans the Arakawa river in Japan there exists one such community, where a musician wears a giant star on his head, a man believes he is a kappa and that barely scratches the surface of the strangeness occurring under the bridge. NIS America brought us the first season of Arakawa Under the Bridge, the review of which can be found here, during the summer of last year and has now brought us Arakawa Under the Bridge x Bridge. Is the second season of those who live under the bridge just as zany as the first?

Story:
For those who have never seen the first season, the story of Arakawa Under the Bridge follows a man named as Ichinomya Ko, the heir to one of the largest and most powerful companies in the entire world. However there is one rule that dominates Ko’s life and that is the fact that he refuses to owe anyone a favor or be indebted to a person. As such anyone who helps him out before he can deny it must be repaid in kind or else it would go against everything that Ko is.

However when his life is saved by a strange woman named Nino at the Arakawa River his life is changed forever as she requests that he become her boyfriend/lover. As such Ko’s life takes a drastic turn for the crazy as he moves in under the Arakawa Bridge, receives the new name of Rec (short for Recruit) and lives with a community which is home to some of the strangest people you will ever meet. 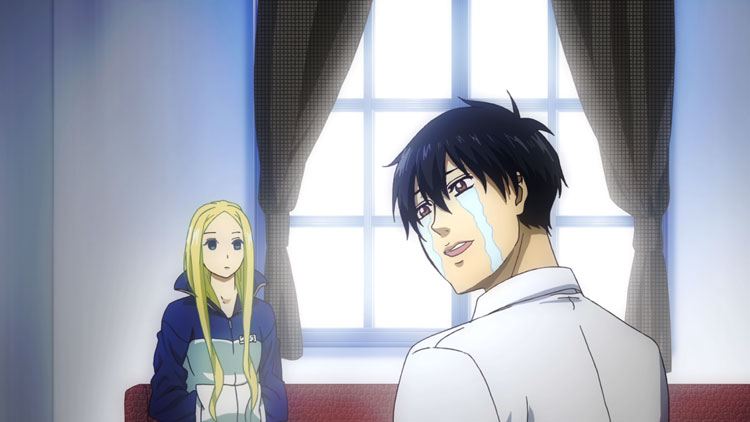 Arakawa Under the Bridge x Bridge starts off where the first season left off, with Rec continuing to live his life under the Arakawa Bridge and trying to co-exist with the out of control crazy actions occurring everywhere around him. While Arakawa Under the Bridge x Bridge doesn’t follow much of a story structure, instead most episodes, which themselves consist of multiple mini-episodes, serve very little connection with one another.

As such don’t expect to see too much story development here; in fact that is one of the drawbacks to the series as a whole. While the comedy of Arakawa Under the Bridge x Bridge is a shining star that would make even Hoshi jealous, the pacing of the story is dreadful and whenever a joke falls flat it crashes and burns in a spectacularly drawn out fashion. While most of the jokes will leave you laughing, there are a few scattered throughout that will feel like they have been extremely overused, especially ones which have carried over from the first season.

Now while some jokes may be overused, the heart of the show is still its diverse cast of characters that always have something unexpected up their sleeves. In fact the majority of the comedy you will experience is through the various cast’s interactions with one another and their daily lives while Rec tries to play the straight man to their random comedic antics. The first season of Arakawa served more as an introduction to all of the characters we are seeing in the second season, though a few more are introduced and given plenty of screen time. The second season focuses more on the interactions between those living under the bridge and provides plenty of side-splitting humor, though some of the jokes are obviously hit and miss. 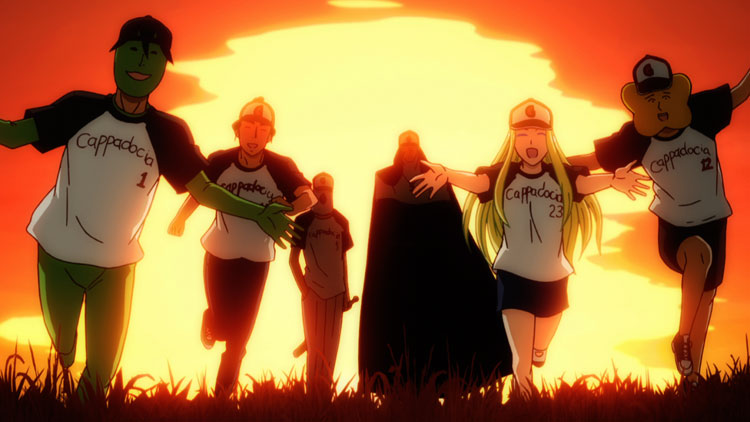 Of the newly introduced characters the Amazon who is built like a weightlifter with a personality of a maiden-in-love. The Amazon is also followed around by a group of three strange men who call themselves the Tengu that always watch out for her. These four join the regular cast who all have unique silly personalities who create most of the comedy whenever these personalities have to interact with one another. Unfortunately the poor pacing returns when it comes to the characters, as there is very little actual development here for any of the side characters as they are mostly there for pure comedy purposes.

Despite the heavy focus on comedy, two characters still sit as the stars of Arakawa Under the Bridge x Bridge and they are Rec and Nino. These two’s developing relationship with one another provides plenty of cute and enjoyable moments as their naiveté about how to handle a relationship creates plenty of funny moments throughout the series. As such the couple feels more real, despite the fact that both of them have their own unique quirks just like everyone around them and will leave you smiling whenever the two share a charming moment together. 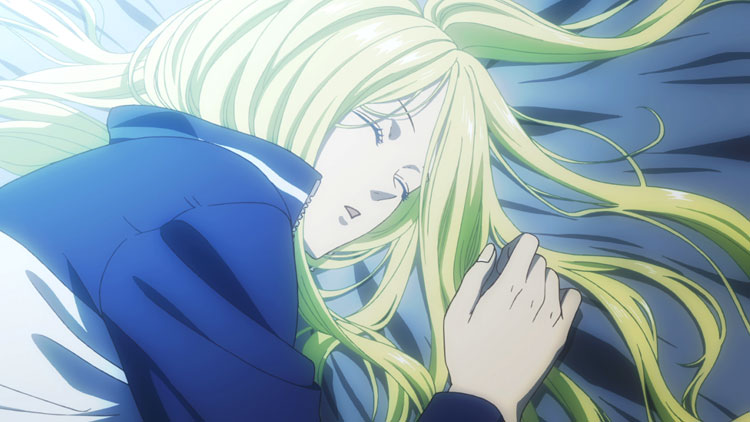 It is worth noting that there is very little introduction or backstory given on Arakawa Under the Bridge x Bridge, so while it is potentially possible to enjoy season two as a standalone viewing experience, it is highly recommended that viewers watch the first season beforehand as they will get the most out of their viewing experience and more laughs as they understand a bit more about each of the characters’ personalities.

Visuals:
One of the highlights of the characters is that none of the bare any resemblance to one another in regards to character designs. Each character has their own, often strange, design that makes them who they are and are visually pleasing. This is only helped by the fact that the series uses a vibrant color palette which accentuates the well-drawn backgrounds. 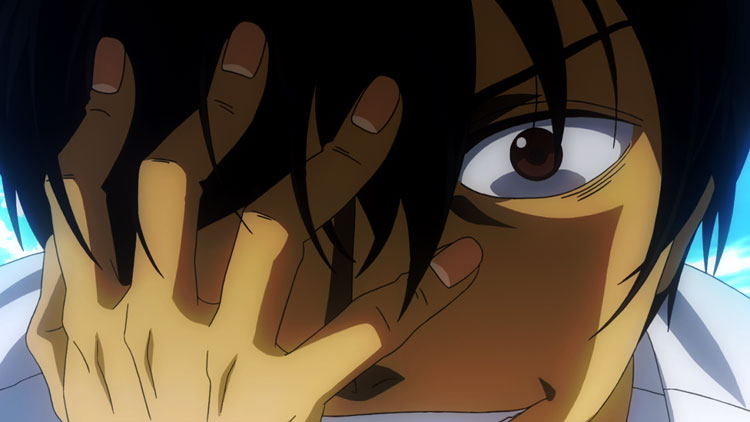 The animation quality is rather consistent throughout the show with minor character deformations only used for sight-gags as well as multiple flashes to Rec’s face or other character’s faces in standard SHAFT fashion. The Premium Edition comes with both the Blu-ray and DVD versions, with the Blu-ray version of the show clearly superior as it emphasizes the vibrancy of the colors used throughout each episode.

Audio & Subtitles:
Now it is immediately worth noting that NIS America’s release of Arakawa Under the Bridge x Bridge, like the first season, does not contain an English dub which means those who are watching the show will need to leave the subtitles on to understand what is going on at any given time. The subtitles themselves are fairly accurate and translate what is happening well enough. 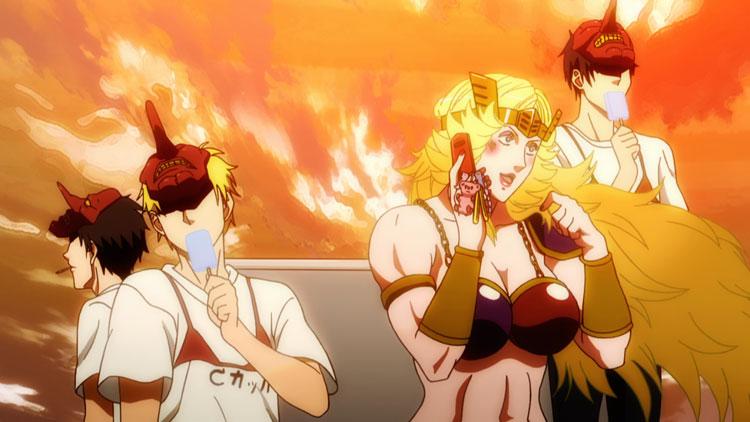 As for the Japanese voice actors, all of the characters have seen their roles reprised from the last season, which is beneficial to the series as the voice cast performs the same great job they did from the past season. Rec’s voice actor Kamiya Hiroshi provides excellent voice work and his interactions with Miyuki Sawashiro’s voice work for Nino work well together, though the Amazon’s voice-switching often seems out of place and her more girly voice is grating to listen to.  As far as music goes, the background music is alright, but doesn’t do too much for the series as a whole. One thing that does stand out however is the opening song “COSMOS vs. ALIEN which is your standard J-Pop song, but set to a very strange opening sequence that works perfectly for the song. The ending song, “Red Coat” isn’t as intriguing as the opening but still does a fine job ending the show.

Extras:
As standard with NIS America’s Premium Edition releases, Arakawa Under the Bridge x Bridge comes with two slim DVD sized cases as well as a 32 page hardcover art book inside of an over-sized collectible chipboard slipcase. This collector’s slipcase features a glossy finish as well as artwork on both sides, with most of the main cast featured on one side and the other side featuring the new characters introduced this season, the Amazon, the three Tengu and the Creator.

The on-disc bonus features included are some TV spots from Japan, an end card gallery which features all of the artwork shown at the end of the show in a brief slide-show as well as commentary from the various Japanese voice actors for the first four episodes of the season. The audio commentary isn’t too simple to access however, as viewers need to watch the episode normally and then switch both the audio and the subtitles over to the commentary selection, as the commentary is still in Japanese and needs English subtitles to be understood. 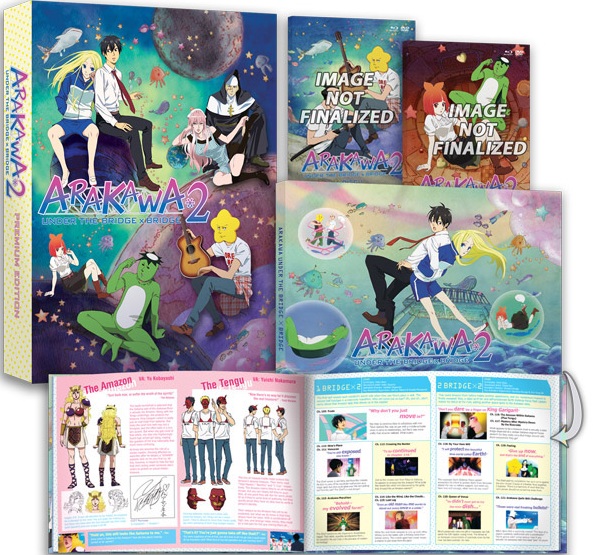 The 32 page art book is likely one of the best that NIS America has released in quite a while. While it contains brief character summaries of the newly introduced characters and your standard episode summaries and a few pieces of artwork there are tons of interviews inside the book with the cast and production staff from Japan. These interviews contain nearly everything would want to know about the show, the actors and even the opening and ending songs. While there really isn’t as many pieces of artwork, the massive amount of interviews with the original staff and information about the show overshadows any artwork that could have been included in this version.

Overall:
While the story main progress extremely slowly and focuses more on making viewers laugh with comedy that always seems to come out of left field, this is beneficial to the series as a whole. While things could easily have gotten more serious from time to time the comedic essence of Arakawa Under the Bridge x Bridge would have been lost if things became too dramatic at any given time. As it stands however, Arakawa is still an original and funny anime that stands out from the rest by having unique anime characters with strange personalities that you won’t find anywhere else besides under the Arakawa bridge.