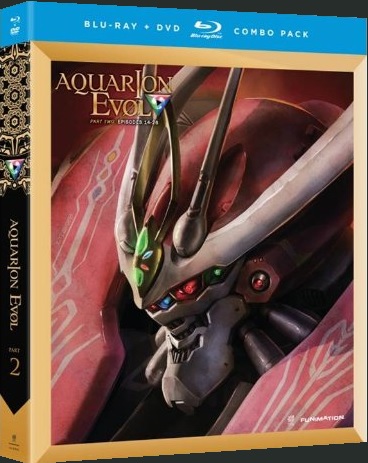 Overview
There are a number of two-cour anime series that start out a bit slow in the beginning in an effort to introduce viewers to the world and the characters only to fall apart in the second half. Aquarion Evol’s first half helped establish the battle between Vega and Altair as well as introduce us to the conniving Mykage who seems to be pulling the strings behind everything. Now with the first half down and plenty of innuendo to go, does Aquarion Evol Part 2 manage to bring this story to a successful conclusion?

Story
It is worth noting that this review will contain spoilers for the events that happen in the first half of the series. Anyways, the second half of Aquarion Evol begins on a somber note as Yunoha, Amata, Mikono, and the rest of the class mourn the death of Jin who, despite being an enemy, was their friend. On the other side of things, Mykage uses Jin’s death as a rallying cry to stir the men of Altair into action all while hiding the fact that he is the cause of Jin’s death. 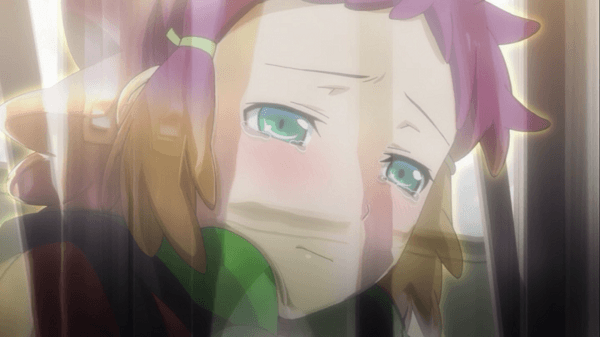 While mourning the death of Jin, Fudo places the Aquarion pilots through a nightmarish training scenario where they are buried under ground alongside their dead friend in an effort to push them past their current limits and trigger Mikono’s abilities. While this is successful, Mykage makes use of the situation to allow Kagura to appear on Vega and not only thwart the pilots’ new abilities but also kidnap Mikono.

Although they manage to put a stop to Kagura’s rampage and rescue Mikono, emotions are running high as not only does Mikono feel an odd connection to Kagura, the worried Amata continues to ignore Zessica even though she seems to have the best grasp of events. Following a love confession from Zessica to Amata and developments between Andy and Mix the series begins to move forward towards the final series of confrontations.

While the first half of the series was spent introducing us to the cast of characters, focused on a number of odd training exercises between couples, and spent plenty of time on humor and lewd jokes, the second half is mostly about trying to wrap everything up that has been hinted at so far in the series. While it may begin with some more training, most of the focus is centered on developing Amata, Mikono, and Zessica’s relationship as well as Andy and Mix. 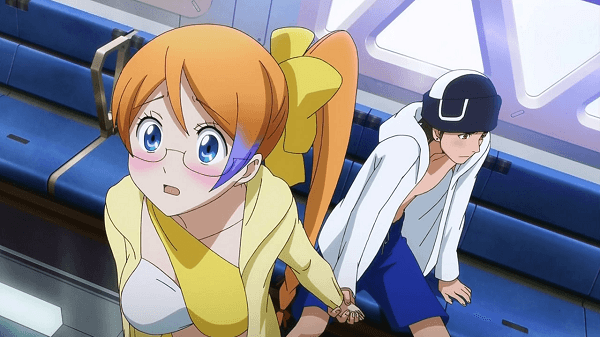 This becomes a rather interesting task considering the fact that the way that the main characters have been developed is incredibly weak. Mikono consistently appears useless throughout the entire series, Amata’s past and connection with Kagura is revealed but lacks any impact due to the fact that the series spends little time letting the viewer feel like Amata is even a character we should really care about at any point in the series as his blind obsession with the boring Mikono is a terrible aspect of the series.

On the other hand, watching how Andy and Mix develop over the course of the series and the trials that they are put through in the second half shows how the series’ relationships should have been handled in the first place. There is actual development made between the two and although Andy’s forthrightness is mistaken as simply being perverted, he is an extremely likable character. Alongside that, watching Zessica’s slow descent into denial and acceptance of where her emotions lie is another interesting experience, even if it seems she is put through the harshest trial for no pay whatsoever. 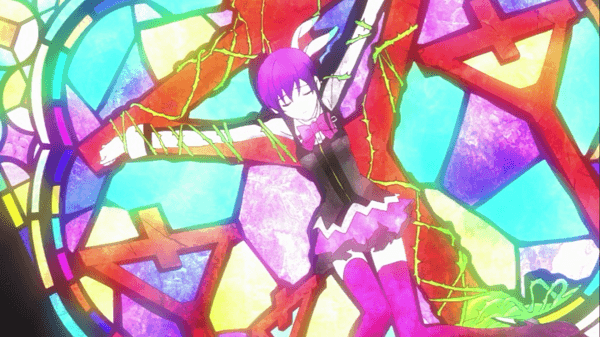 Ultimately Part 2 of Aquarion Evol falls back on a large number of references to the original Aquarion series as numerous names are pulled out from the past regarding reincarnation and fate to try and wrap things up but generally losing any sense of meaningful development because of this. By dropping most of the humor that made the first half of the show so fun, the series finds itself a conclusion but one that will leave viewers feeling disappointed despite the amount of action, character development, and twists that occur in the final set of episodes.

Visuals
It can be said that Aquarion Evol was probably one of the best looking series when it aired back during 2012 as the animation is handled so well. The mixture of standard animation and CGI with the various Aquarion designs and battles is so impressive looking that it puts many other series’ attempts at such a feat to shame. Thanks to how impressive the animation is, every battle sequence looks amazing without any significant drop in visual quality which is hard to accomplish but looks simple in Aquarion Evol. 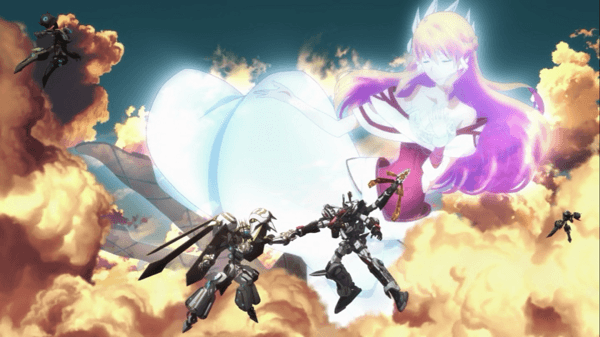 As before the character designs feature a number of variations with plenty of bright colors to help keep things looking fresh. Zessica goes through a number of wardrobe changes in the series as she tries to come to terms with herself and the environments, including all of the time spent on Altair, are incredibly detailed and impressive to see.

Audio
Unfortunately I must say that the voice work for Aquarion Evol’s second half is still sub-par in a number of areas. The English voice work is passable at best and it seems like a few of the side-characters have come into their own throughout the second half which is nice to hear. Thankfully alongside the English dub the original Japanese voice track is still intact for those who would prefer that option. 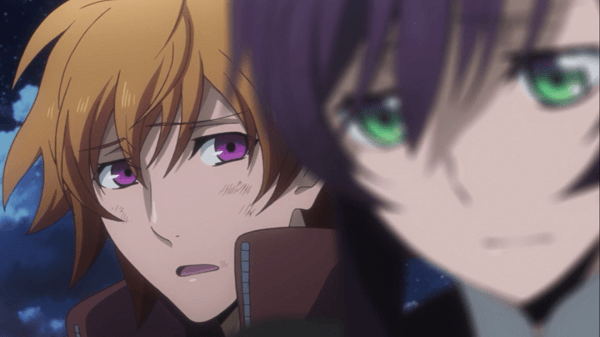 As before, one of the best parts of Aquarion Evol is the series’ soundtrack. With numerous orchestral tracks spread throughout the series, many of which are accompanied by great vocals, help make a number of important scenes really stand out. The main opening theme for part two is “Paradoxical ZOO” by AKINO with Bless4 and while it is still a great opening song, it isn’t as good as the first opening theme. As for the ending theme, a few different themes are used in the second half but most of the episodes close out with the somber “Yunoha no Mori” by Yui Ogura, the Japanese voice actress for Yunoha.

Extras
The bonus features included in Aquarion Evol Part 2 are fairly standard for a FUNimation release, though that is more than can be said for some company’s releases. There are a number of promotional videos from Japan, the US trailer for the series, a clean version of the original opening theme and second opening theme as well as a clean version of the main ending theme in the second half, and finally trailers for other FUNimation anime. 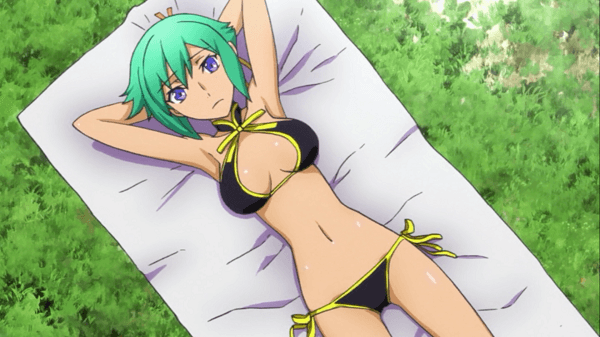 Closing out the special features are two episode commentary tracks, one for episode 15 featuring Cristopher Bevans who voices Amata and Jaffe Taliesin who handles the voice of Kagura. The second commentary is for episode 26 and sees the return of Bevans who is accompanied by J. Michael Tatum, the voice of Mykage, and Caitlin Glass, voice of Zessica.

Overall
Aquarion Evol is a series that started out with promise but ends up being a disappointment when everything is said and done. With such an outstanding soundtrack, superb animation, and great action sequences it is hard to say that the series ends up being generic in many regards due to the way the show tries to tie everything together and how terrible Amata and Mikono are as main characters. Numerous issues surrounding Amata will feel superfluous and have no resolution, but at least the side characters actually have a story of their own to help make Aquarion Evol’s second half somewhat worthwhile.