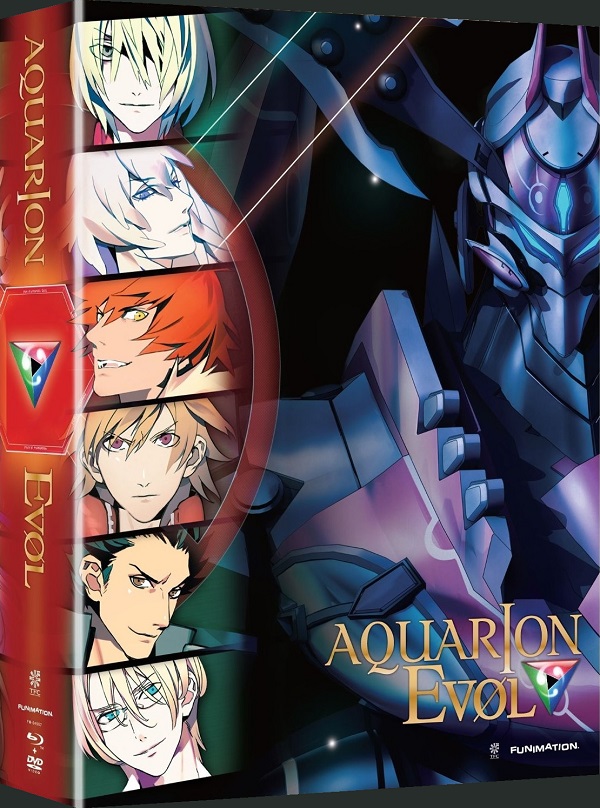 Overview
Creating an original anime can lead to either great returns or failure since there is no way to gauge whether or not an original series will be popular based on already released material. Usually these original series tend to be completed after only one season, and rarely is a sequel made seven years after the initial release; however that is the case with Aquarion and now this series, Aquarion Evol. After all that time has passed, and perhaps many viewers never seeing the original season, how does Aquarion Evol Part 1 manage?

Story
Since this is probably going to be a sticking point for some, let’s start off with the fact that Aquarion Evol is a continuation of the Aquarion series. While knowledge of Aquarion is not required to enjoy a lot of what the series has to offer in this first part, numerous references, callbacks, character appearances and much more are played off of the original Aquarion season. This means that fans will obviously be able to enjoy the story better as they will be able to catch the various nuances, references, and learn of plot points earlier, where new viewers may not. 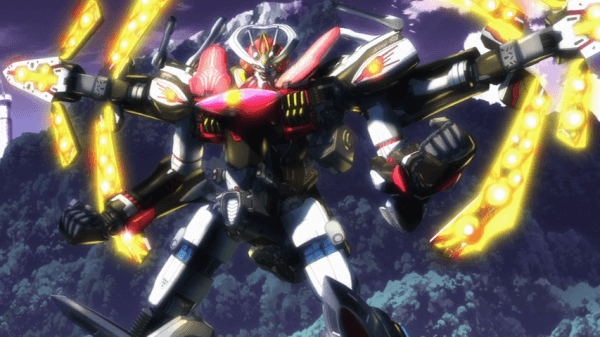 Anyways, the story of Aquarion Evol takes place 12,000 years after the events that happen in Aquarion and the events that happened in the past series are considered myths and a movie was even made based loosely on the events of the finale of the first season. A teenager named Amata Sora is watching the movie in a theater alone, until a girl named Mikono appears and actually enjoys the movie with him. After falling in love with Mikono at first sight, he begins to escort Mikono around the city until a threat new to Aquarion Evol appears.

You see, while the planet that Mikono and Amata live on, Vega, is thriving with life, another planet called Altair is on the brink of collapse and the only way that Altair can try and sustain itself is by abducting women from Vega and with every batch of Abductors that appear, the Vega forces must fight back with the skills of the Neo-DEAVA pilots and their Aquaria mechs which can combine to create a more powerful robot whenever three pilots come together. 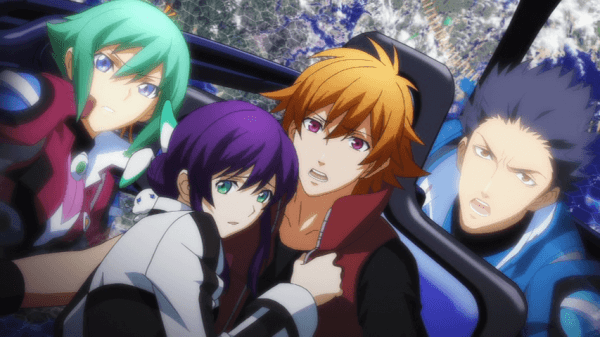 Though there is an interesting twist to these Aquaria weapons, the organization only allows for single gender teams with absolutely zero interaction between the two, even going so far as to erect a gigantic wall between the bases and equipping the Aquaria mechs with special safeguards so that any male and female union is rejected. When the Abductors appear and a beast of an enemy pilot takes interest in Mikono, Amata reveals an ability that he has been ashamed of his whole life, the ability to fly. But he also triggers something that will change the face of the battlefield and the lives of the Neo-DEAVA members, a union involving male and female pilots to create the legendary Aquarion.

After repelling the initial Abductors, both Amata and Mikono find themselves enlisted in the school where Neo-DEAVA keeps their pilots, only now the wall separating the two genders for so long has been torn down. With emotions and hormones running high, a plan is put into motion by the leaders of the organization to take advantage of these feelings as the stronger the emotions that tie pilots together, the stronger the Aquarion becomes. However there is one line that they must not cross, the line of love for if they do, it will only end in disaster.

While Aquarion Evol Part 1 consists of thirteen episodes, this first half of the series spends most of its runtime introducing viewers to the core cast of characters and their Element powers and setting up relationships. One thing that Aquarion Evol does well for the most part is take a number of anime tropes, and place them all on one character to such a heightened degree that they are usually used for comedic relief. 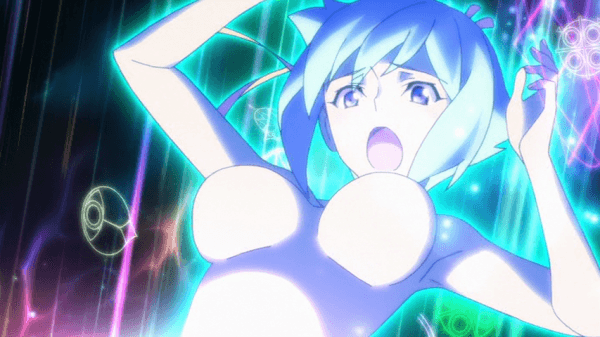 Such is the case with a yaoi loving girl who constantly pushes two boys together and has the power to take secret photographs, a girl so shy that she can turn herself invisible and more. The series is also rife with innuendo and jokes concerning the joining of the two sexes, the interactions between the two, or tons of hole puns. Of course the thinly veiled symbolism of the combination sequences may be a bit of a turn off for some as it is laid on very heavy numerous times throughout this first half. The first time a male and female union occurs, the robots push into each other before rupturing the seal to become one, all while the pilots experience euphoric feelings as they join together. While not used for every union, any time that a new character is merged, the climax scenes appear and the dialogue during these moments is well, terrible.

Speaking of terrible things, while most of the characters in Aquarion Evol are enjoyable for their quirks and the stereotypes they embody, the main girl Mikono features every bothersome and terrible trend in a female lead with very little development. While it is clear that other characters are starting to make connections and even the surface level flirting of Zessica eventually turns into true feelings, Mikono’s presence in the series drags down what would be an otherwise enjoyable introduction to the cast and world in this first half. 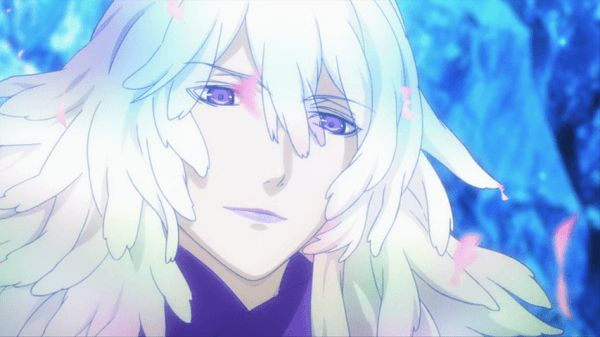 Outside of character introductions and world building, Part 1 also reveals a number of machinations occurring on the planet of Altair as Mykage, an extremely powerful enemy with no qualms about sacrificing his people, begins to pull the strings and influence elements of the story to benefit his final goal. This becomes a driving force behind the series as viewers watch his manipulations unfold before finally leaving viewers with an emotional cliffhanger with the death of a new ally and months to wait until Part 2 is released.

Visuals
Aquarion Evol is a gorgeous looking show in many ways as it excels in almost every aspect. The designs of the Aquarion transformations are highly detailed and each of the mech battles are wonderful looking with some great looking fight sequences. When this is combined with the fact that all of the environments and backdrops in Evol are highly detailed and impressive to look at, and you’ll find many scenes worth checking out more than once. 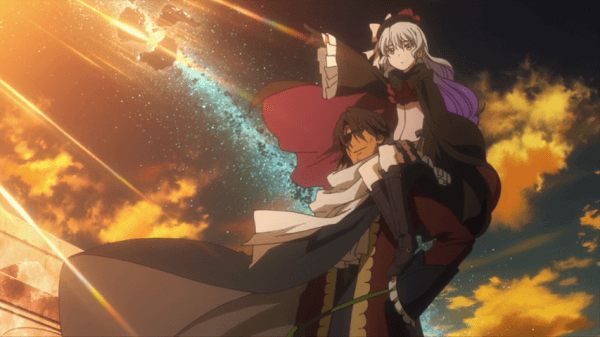 As far as character designs go, Aquarion Evol features a nice variation of character designs and outfits, ranging from some generic looking side-characters to rather outlandish clothing choices making for an original looking cast of characters. There is some minimal fan-service in the show as some characters have revealing clothing and the union sequences feature outlines of each character’s body, but it is split rather evenly between male and female service.

Audio
While I usually don’t have an issue with the way FUNimation handles their English dubs, Aquarion Evol is easily one of their worst attempts in quite some time. While some of the scenes in the series are voiced well enough, more often than not the characters are either over-acted or the voice actors voice will falter halfway through a sentence, sounding incredibly awkward, making Aquarion Evol a series that is probably best watched using the Japanese voice track. 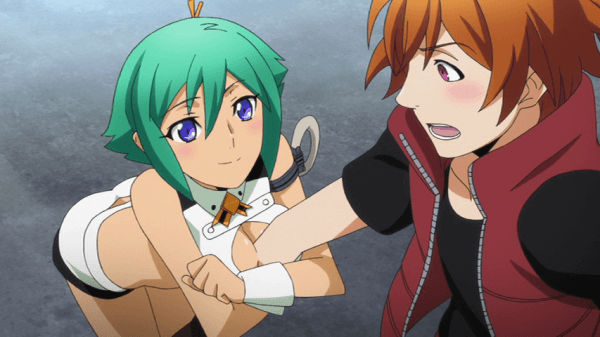 Outside of the bad English dub, the anime’s sound track is simply outstanding. Thanks to the abundance of characters that fight in the Aquarion, each of these characters has a theme song with vocals that will play during their battle and these tracks help make each battle feel climactic. That feeling isn’t lost with the opening and ending theme either, as “Kimi no shinwa – Aquarion dai ni shou”, the opening, and Gekkou Sinfonia”, the ending, both by AKINO with bless4 are amazing sounding and are paired with incredible animation sequences. 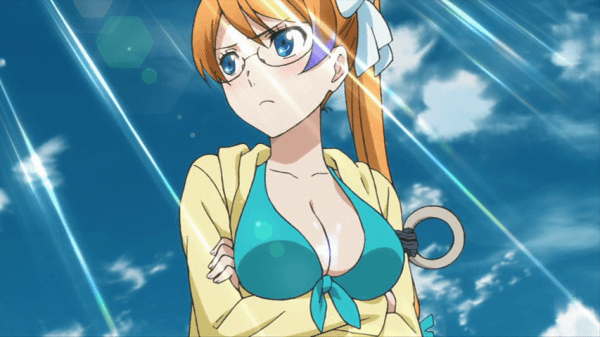 Outside of those standard inclusions there is also The Myth of Ten Thousand Years and Two Thousand More Returns which is a twenty two minute long special feature that is presented in Japanese only and features interviews with the Japanese cast, information about the first season and how it connects to Aquarion Evol and more.

Overall
Aquarion Evol Part 1 eases viewers into the story by introducing the characters and the world over the course of this first half while also building up the main storyline that only just starts to unfold by the end of this release, leaving viewers eager to see what will happen in the second half while not alienating those who never saw the original series. Evol also features an amazing soundtrack with outstanding animation and artwork but sadly it is marred by focusing on a terrible female lead and a bad English dub that is best turned off in favor of the Japanese voice track.