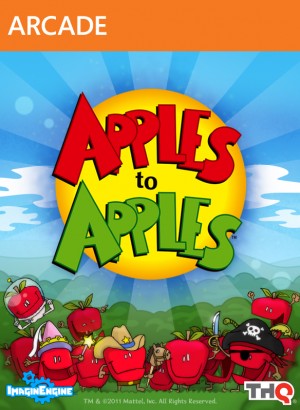 Overview
Apples to Apples is one of the only games that can include the person “Adolf Hitler” and the adjective “honorable” and somewhat get away with the correlation. The beauty of the game is that it can be played a variety of ways at any given moment. As a card game, it has been a game that brought family and friends closer together. Now that the game is available on Xbox Live Arcade, Apples to Apples enables players to experience that same fun-filled environment through online play.

Gameplay
The user interface for the single player mode is easy to understand. A list of three red cards are shown on the left or right side of screen, and the player can choose the best fit for the green card shown on the opposite side. The screen’s center has a scrambled letter puzzle along with a timer above it. The player has the ability to move up, down, left and right on the puzzle board and may also select/deselect letters with (A). To progress gain the green card, the player must correctly select the letters on the board to match the correct identifying red card. If the player chooses the wrong card’s letters, he/she will then be docked an allotted amount of time. Choosing correctly will give the player additional time and progress to the card. 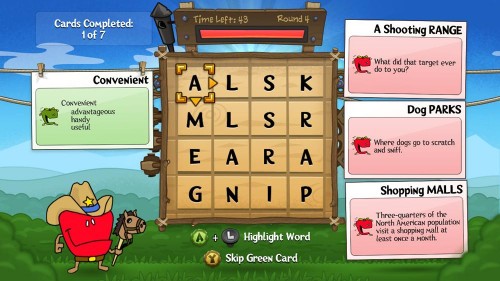 Failing to complete a puzzle in the time resets all of the cards you might have acquired during that round. Once the round resets, players may encounter the same cards. This is where skipping cards can prove useful. Players can skip a green card by pressing (Y) and try to solve the next available card. Skipping cards might dwindle the time down a little bit, but can prove invaluable against restarting rounds. There is nothing more annoying than losing a round when you have already completed 5 out of 6 green cards.

The single player mode incorporates a puzzle format that becomes increasingly challenging. As the rounds progress, the ability to decipher the correct red cards is harder. The more advanced levels masked a portion of the red card with question marks making the player guess at the very word you are trying to create on the puzzle board. This is probably the most frustrating area of the game. I would advise all players to have a pencil and paper beside them while taking on these difficult puzzles. If you really feel you are short on time, feel free to pause the game by accessing the dashboard. Going back and forth will slow down the timer and give you a longer chance to figure out a card. 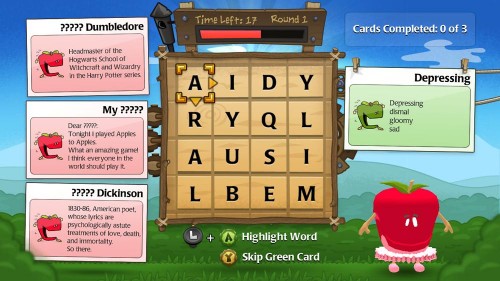 Apples to Apples is unquestionably meant to be played as a multiplayer game. For those unfortunate enough not to own the board game, players can have local matches on the Xbox 360. Two different modes are available for local matches – Pick A Card and Classic. Classic mode plays out normally with three players that alternate judging. The judge picks the “best” card to their liking. Pick A Card is slightly different. Still having at least three players with one judging, the non-judge players individually choose three cards scattered on a grid. Once the players have picked three cards each, the judge receives one random card from each player. Note that the player does not get to choose the card, so pick cards wisely. The round will finish as it normally would in Classic mode.

Personally local multiplayer does not trip my trigger. I believe privacy of cards is essential in Apples to Apples to make the game more exciting. Classic mode on the console reveals all of the player’s card and can hurt anyone’s chances of winning. If an opponent is about to win and you know their cards, you will obviously choose the other person to win that round. Pick A Card offers an unique feature of randomizing the cards that show at the judging phase but still enables a player to cheat. I do not see any way to combat against cheating unless you tell your friends, “close your eyes I’m picking my card.” 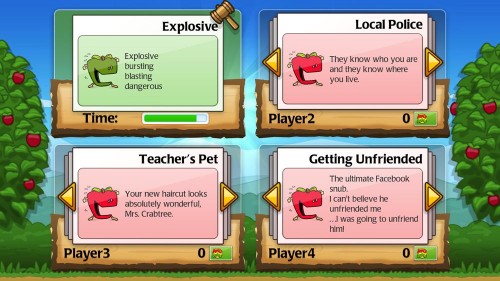 Online play can be extremely fun. My one recommendation for anyone playing online is to have a headset. Quite regularly Apples to Apples requires the player to be sneaky and/or explain their card choice. For an example if I wanted the judge to pick my card, I would glorify another person’s card and not my own. This may confuse the judge and propel him/her to choose my card. As for explaining your card, the judge might not understand why you choose “hedgehogs” for “revolutionary”. I might explain that hedgehogs are revolutionary because of the effect that Sonic the Hedgehog had with the company SEGA. Without a headset you would not be able to have that conversation and potentially lose the round. Additionally, players would miss out on the fun social experience that is Apples to Apples.

Audio/Visual
The graphics are bright and colorful. During the single player gameplay, you can unlock new avatars for each stage you complete. With many avatars available, my personal favorite is the lion apple – RAWR! Alongside the lion is a witch, ballerina, and pirate to name a few. Each peculiar apple has its own funny animation suitable for “Everyone 10+”. 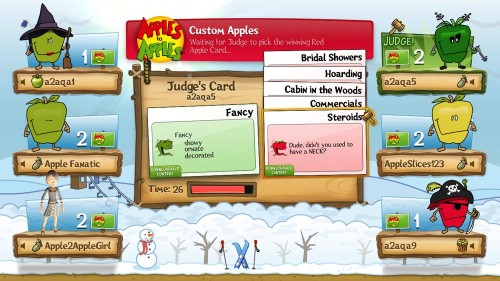 With a combination of strengths and weakness, sound effects do not greatly affect the gameplay. Once again the avatars offer amicable sounds that fit the game’s corky persona. A cowboy apple will jump up and down on his horse and the lion will proclaim triumph in a gentle roar once a stage is completed or hand is won.

Alternatively, the most annoying aspect of the game is the sound of the timer. The reason for its annoyance is that players will lose a lot during the single player mode. The sound is like a loud choo choo train whistle. The shriek is still resonating in my head… Try taking a break between stages to deter yourself from this lasting effect.

Overall
The main feature that ImaginEngine shot for when creating this game was the online multiplayer. With multiple online modes to explore, the experience itself can be varied depending if players are using headsets. Even though Apples to Apples is not normally considered a verbal game, the social interaction can drastically enhance the gameplay. Plus, no one can yell at you for being anti-social if you’re talking to people online. 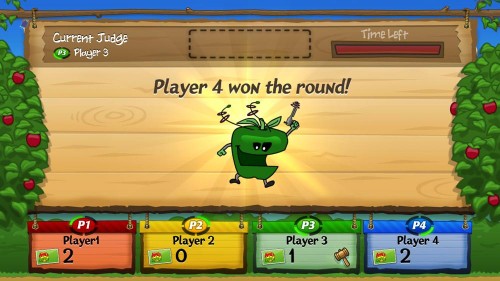 Single player is available for gaming substance if no one is available to play online. However, the puzzle format can become repetitive and ridiculously difficult in the later stages. I completed the single player once, and I had a pen and paper next to me with correct word correlations. Feeling accomplished I didn’t feel the need to go back and test my luck against the cards I gladly skipped.

The concept of adapting the card game to consoles was an intuitive idea. As long as the social interaction is available, the console version emits a relatively similar experience to the physical game. Without using a headset, Apples to Apples feels uneventful. I would add under the online multiplayer, “Headset Recommended”. And gameplay is definitely subject to change during online play.

Charging Rhinos and Flying Monkeys give Apples to Apples