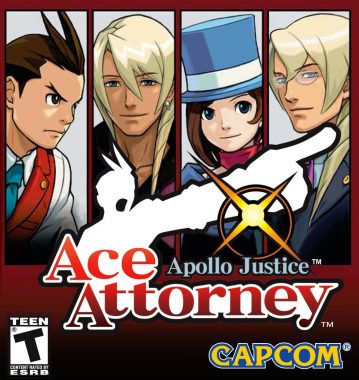 It is hard to believe that it has been nearly ten years since Apollo Justice was served out for the 3DS, marking the fourth installment of the Phoenix Wright franchise, while letting players get a dose of a new protagonist in what was definitely one of the hottest properties on a portable during the 2000’s. What isn’t hard to believe is that Capcom love bringing back their successes this generation, and have finished off the main line ports with Apollo Justice: Ace Attorney now landing on the 3DS. This title may be a spin-off in terms of character, but kept so close to the core that it is considered to hold just as much weight for the overall series, compared to the likes of the other Wright titles that came before it. Can it still live up on a new platform after all of this time? Let’s find out. 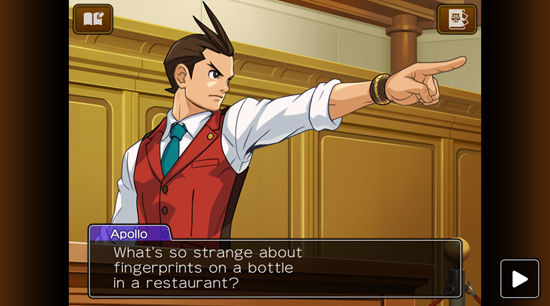 Missing panties. Poison. Thievery. These are just three types of cases Justice must tackle in this installment, as he goes from one investigation to the next in attempt to successfully represent his clients. For those that remember, one of the first cases have you represent Phoenix himself, which is definitely a nice splash of familiarity as you enter the courtroom. While there is a lot of story within each little section (separated into four different overall cases), with each connecting a overarching narrative that spreads throughout the entire game. This is typical visual novel fare, but done with a lot of love and detail, as the strong writing allows for the player to immerse themselves into the many personalities within the game, which makes every decision you make later on feel much more impactful. Being honest, Apollo Justice was never my favorite title in this franchise, but it still is good – and definitely crafted to give hours of entertainment for fans of such an iconic namesake.

Apollo Justice plays a bit like a point and click adventure, for those unfamiliar. Players are able to use their D-Pad and stylus to go from location to location, sharing dialogue sequences with other characters while obtaining evidence and clues for each case. During the investigation phase, players simply speak to witnesses and citizens, while picking up items that may be relevant to the crime. As a little bonus for players, there are also brief moments where you can utilize the microphone and stylus to interact with a specific area, allowing you to dust for fingerprints or swipe away an item to uncover something of interest. 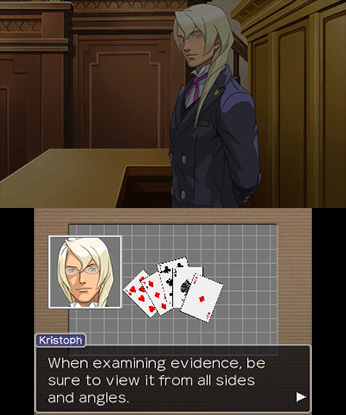 Those mechanics are certainly fine, but Apollo Justice shines the brightest in the courtroom. The judge has a life bar that reflects his patience, and the player must present correct evidence in order to get through a case without causing too much irritation or doubt. On top of presenting evidence, players will also have the opportunity to hear each testimony, and then drill witnesses on the stand in order to drive the case further home. The exclusive perceive feature added a lot of depth the first time around, and still holds up despite being a regular mechanic in many more modern titles that feature investigation themed gameplay. 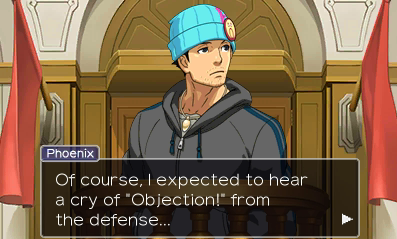 That said, this is the 3DS version and there are a few new tricks for those who are both new and seasoned to the experience. Players can now speed up dialogue by holding down a button if they choose, which can be a pleasant feature for those of us who have already played the game quite a bit and know these stories by heart. Those who are loyalists to the eastern style can also have a reason to celebrate, as you can change to the Japanese version of the game that holds its own unique save file. Sure, there are not a ton of new additions, but there seem to be just enough to call this port definitive.

The visuals for this Ace Attorney title have never looked better. I mean, that is expected as the 3DS is far more powerful than the original DS, but considering how sharp the 2D cutscenes, animations, and colors look within this version, it is nice to see that Capcom worked to ensure that this release was handled with care. I remember reading during the press release for this game that a lot of changes were subtle and for those with an eye, but to be honest, I just didn’t see too much different other and minor (and I do mean minor) set decoration changes. The game still looks great though, so there is that. 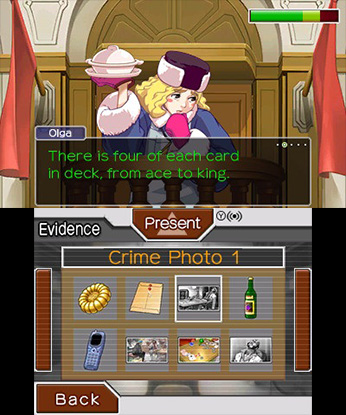 The audio is also well done, bringing back and excellent soundtrack for a game that kind of wasn’t remembered for being the strongest in terms of music for the franchise. It wasn’t that the music was ever bad in Apollo Justice, it is just that this title is usually talked about less in all aspects, so it was great to get a chance to get a different atmosphere. The voice acting in both languages was also solid, with small yet impactful uses of verbal dialogue that add a lot more meaning to each scene.

Apollo Justice: Ace Attorney is just a nice title for the 3DS to get this late in its life. Not only does it complete Capcom’s “lists of titles to port” for this franchise, but it also reminds us all that Phoenix was not the only attorney worthy of celebration. Even though the changes are small, there is a very well made game here that can be a great starting point for newcomers, or a satisfying double-dip for those who already cherish the original title’s existence.