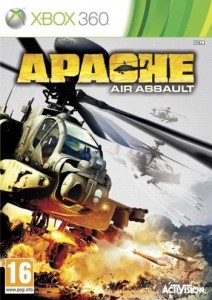 Apache: Air Assault puts the player in the seat of an Apache AH-64, the most lethal attack helicopter this military has to date, blowing up evil terrorists, villainous pirates and all-round bad guys. Activision’s latest title aims for realism and excels in it in most aspects, and while playing it, gamers should keep in mind it is a flight simulator and flying a helicopter isn’t as simple as holding one button and turning like most games these days. Combat involves multitasking and isn’t aimed towards the casual gamer. With this in mind however, Apache: Air Assault does hold its own, and while not all will appreciate the game for what it is, it’s worth checking out if  flight simulation games tickle your fancy. 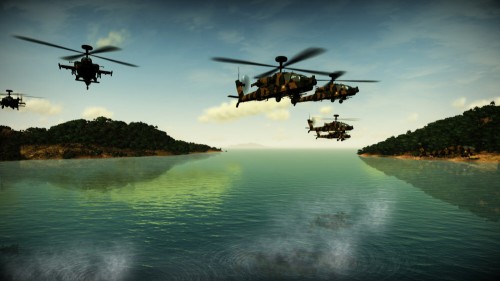 The gameplay on the most part will vary on the player. Controls can feel awkward, since it requires two control sticks to move the vehicle, so it has a big learning curve and will take a while to get used to the controls.While the game does have a lengthy tutorial, it doesn’t really teach much, as afterwards you still feel uncomfortable with the controls most of the time. Combat is only half the challenge, as keeping the Apache AH-64 in the air is a challenge as well. Flying in a straight line can be mastered with ease, combat can be a struggle and often feels unrewarding which is disappointing. Finding enemies can also be an issue at times, although admittedly its not a big one. What does help however is the machine gun has a black and white camera attached that can zoom in, and thermal vision as well. The gameplay does have a lot of room to improve, but the basic system is actually pretty solid. If you can master the controls you can have a good time playing it, you just need a lot of patience. Perhaps these days gamers are just used to simple, easy, pick up and play games. What’s done here is pretty admirable, the developers went out of their way to make a game for the hardcore lovers of flight simulation and the technical depth of the controls itself really shows it off. Furthermore, it must be said that the feel of the copters is very realistic. It feels like a helicopter should, from it’s weight to the way it turns, it has a very realistic feel to it which gives an extra layer of authenticity to it all. Sadly, mission objectives are not always clear, but they’re usually either ‘go here’ or ‘blow this up’. Extra modes such as single screen co op are added as well, where one player can move the helicopter while the other player fires the weapons. It really requires co operation, which is great to see as well. 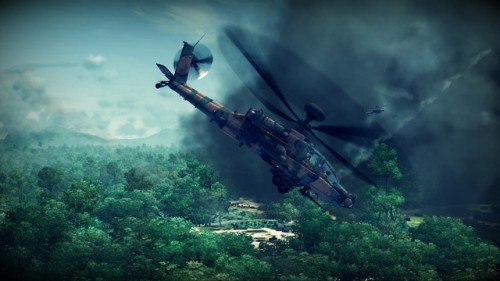 Apache: Air Assault is very visually pleasing on the most part. The helicopters looks great and animation is fluid. The interior of the helicopters is remarkable, detailing every aspect of an Apache AH-64, downright to the pilot moving the control stick around. Elemental effects are done very well, and the game displays hundreds of trees and other scenic aspects at a time with no apparent frame rate issues. However it can be touch in go in some parts, as while some things will look great from a distance, up close they may appear burly, and some textures will seem more plain and simplistic, but not often. Oh yeah, and explosions look great, which is a must-have in a game like this. Audio does what it can, with a very patriotic styled theme to the soundtrack and sound effects are what they can be. The guns, explosions, missiles…everything sounds like it should and are done well. The voice acting is also great, although the dialogue isn’t spectacular. Much like the rest of the game, it won’t blow you away, but you won’t hate it either. 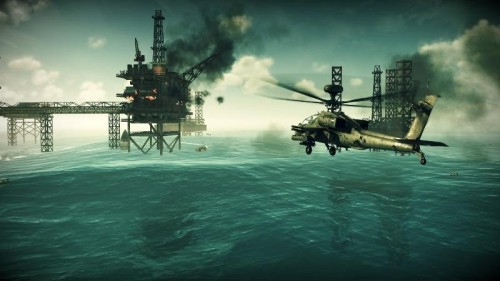 I imagine when brainstorming for new, unique games, Activision thought: ‘A Helicopter game! No one does that!’ And it’s true, their not very common. Usually for a flight simulator, you could expect some form of an airplane. Their fast, cool-looking, and can blow stuff up! Helicopters on the other hand are big and slow, but hey-they can also make things go bang. Apache: Air Assault is a worthy attempt at a Helicopter based title though, and a decent game. What doesn’t pull through in in this title though, is that other than the fact that you play as a helicopter, there’s almost nothing to make it stand out against other titles or to make it memorable or special. Sure it aimed for realism and succeeded in many aspects, but sometimes it feels over done, so instead of feeling like a fast-paced action game, you feel like a solider doing his job so he can pay the bills at home. It’s still worth a rent if your a bored and need something to play if you have a lot of patience, or if your a hardcore helicopter fantastic it’s a must buy due it’s impressive realism, but that’s it really. There is a lot of room for improvement, not to fix anything, but rather make it more enjoyable. It’s a game tailored towards a very niche market, and while it’s a good game, sadly Im sure many would not appreciate it as much as it should be. Apache: Air Assault is a very realistic game and that’s what makes it so impressive. Unfortunately, it’s just so realistic it gets in the way of being fun.

I give Apache: Air Assault: