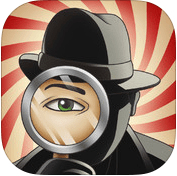 In the days where simple puzzle games like “Candy Crush” and “Bejewelled” reign supreme over mobile devices, one game stands to separate itself from the pack and take its rightful place on the throne! Well maybe that was a little bit overboard but there’s nothing wrong with being a bit “flashy” at times. In all seriousness though; “Another Case Solved” is a game, developed by Ars Thanea Games (AT Games) and published by Chillingo (a juggernaut in the mobile games industry), that has you solving cases in an odd but extremely fun manner I can only really compare to that of a game like “Candy Crush”. It takes the idea of a simple puzzle game and gives it depth but…is depth in a puzzle game always good? 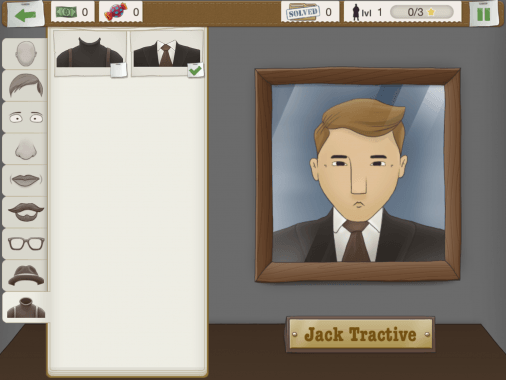 “Another Case Solved” puts players into the shoes of a personal investigator/freelance detective that is just starting out his/her career in a town that has recently abolished sugar, it’s not something I always say but I believe using the quote; “Simpsons did it!” is entirely justified. You’re tasked with building up your professional reputation while taking on any cases you can just get a bit more money. The good thing about the story is that it doesn’t entirely focus on the whole “candy abolition” storyline, instead it focuses on a mix between menial jobs and full blown detective work.

It basically gives players a reason to actually continue playing but it doesn’t force them into unnecessary story, you can easily ignore what characters say and still finish cases just as easy as you would have if you read what they have to say. It has a story that justifies playing the game but it has a gameplay type that doesn’t necessarily need a story to play so it both covers its own butt and cancels itself out, take it whichever way you see fit. 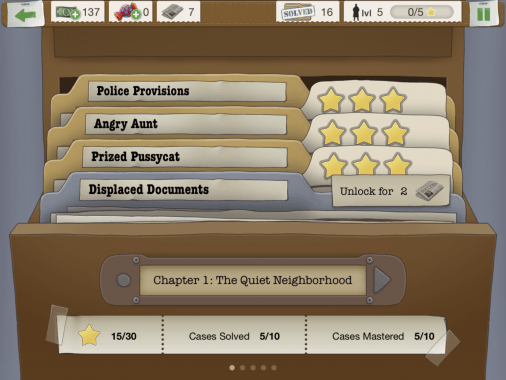 As I mentioned in the paragraphs above; “Another Case Solved” plays a lot like a typical puzzle game wherein which you must match up three or more of the same icon to get points, the difference between those ones and this one is that “Another Case Solved” actually gives you a reason to play the game rather than just scoring more points. Seeing as you follow the story of a detective, you’re given cases to solve but you solve these by actually completing levels of puzzles. The gameplay is quite similar to how a game like “Pokemon Trozei” would be played; you’re essentially just playing a simple puzzle game but you actually have a purpose, in “Pokemon Trozei” you’re whittling down the enemy Pokemon’s health, in this game you’re working to solve cases.

There are more aspects to this game than just the matching up of symbols, there are side games or mini-games to play during larger cases like identifying a perpetrator or investigating a suspects residence, there’s actually a fair bit to do throughout. The gameplay even has players dealing with a great deal of customisation and levelling up both personal characters and the abilities they can use in-game, while I didn’t necessarily use them because I played the title with a more “casual” mentality, I can honestly see a lot of people getting down and dirty with the levelling system and the abilities it has to offer. 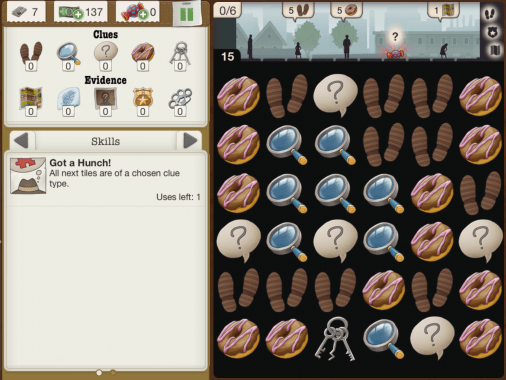 When it comes to visuals throughout “Another Case Solved” I wouldn’t say they were absolutely perfect or that they were ground-breaking in any way but they were damn nice. Fact is; it never really needed to have incredible graphics or anything because it was simply a puzzle game so an abundance of unnecessary visual effects would have been…well, unnecessary. Unfortunately it did seem flat at times and the customisable features were mostly ugly, that goes for the people you come into contact with as well.

Some visual features of the game felt, more or less, rushed but it was definitely made up for by a lot of the other visuals. The really good thing about this game is that nothing looked or felt out of place which should be something every game would have mastered by now but you’d be surprised at the amount of mobile or iOS games that have visuals that don’t quite fit. Thought the screen did sometimes fill cluttered at least everything on those screens belonged there. While this game did nothing to blow me away it also didn’t do anything that would make me hate what it looked like, there are a little things here and there but not every title can be perfect. 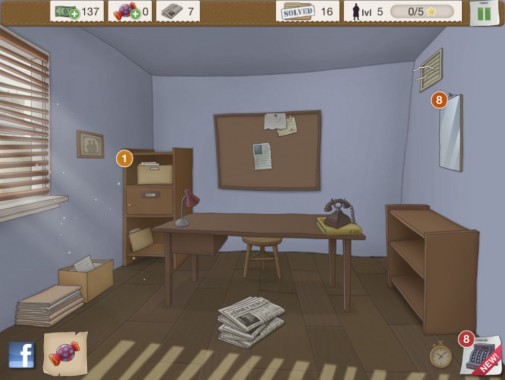 It’s safe to say that the game captured that old-school, detective, semi-noire vibe quite well. The game isn’t exactly set in present times so to assume that it would be filled with modern-sounding music would be to make an uneducated guess. It’s filled with a lot of, I assume, nostalgia-inducing tones and sounds of which you’d probably hear in a more light-hearted version of “LA Noire”. While it is a detective story and it is set in a city riddled with crimes it doesn’t entirely have a dark soundtrack, it’s actually quite light-hearted and fitting. All the sound effects are great and match their visuals which, as I mentioned above, is something you’d assume every video game has mastered but, once again, you’d be surprised.

There’s minimal voice-acting in “Another Case Solved” but the voice-acting that is there is actually damn good, I will give credit to it despite it being a small aspect because if it was the inverse I would be taking points away. One thing that is incredibly annoying is the games advertisement system where, instead of just flashing ads at you, it comes in the form of a phone in your office that continues to ring until you tap it to look at the ad. That was probably the most annoying auditory aspect of the game and although it only every happened when you were at the office, it still good quite frustrating. 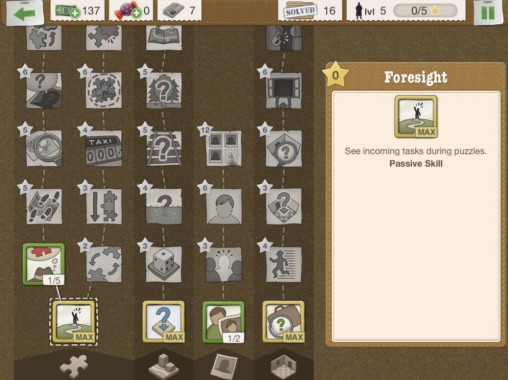 It really is how I defined it earlier on: a game similar to a great deal of puzzle games floating around but one that actually gives you an actual reason to play it. It’s fantastic on so many levels but there are a few small things that make it, let’s say, less than perfect but most people will be able to overlook those small things to be able to fully enjoy the game.