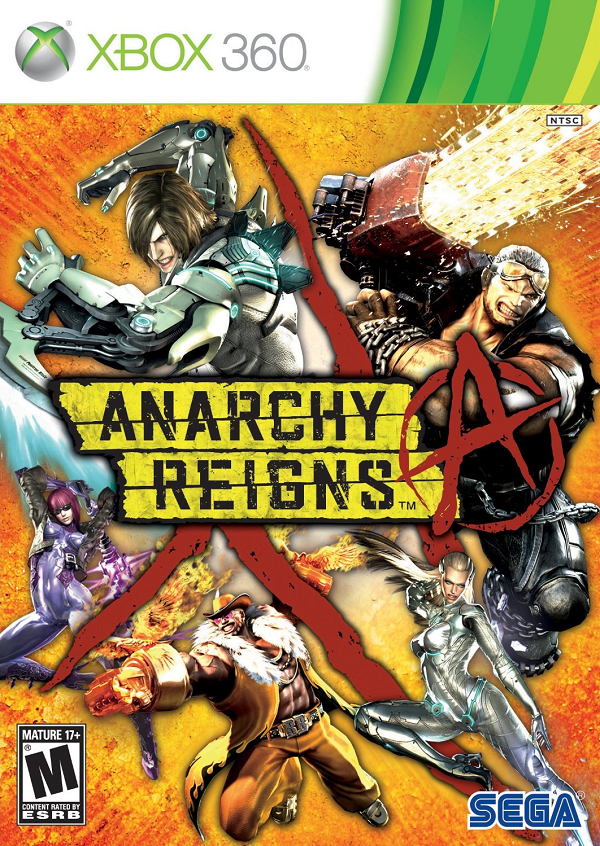 Overview:
Whenever a game is delayed, fans usually sigh in frustration but accept the delay as it often means that the developer is taking time to polish the title. However when a title is delayed for half a year and even the developer of the game doesn’t know why, fans end up not only confused, but frustrated that they have to wait for seemingly no reason. However finally, seven months after the title was released in English in Japan, Anarchy Reigns has finally been released in the West. Now that Anarchy Reigns has been released, the biggest question is… was it worth the wait?

Considering how crazy Anarchy Reigns is, it should come as no surprise that the game’s storyline is unfortunately disjointed at best. While it actually has a rather interesting story, with Leo’s journey following his mentor-gone-rogue and Jack looking for revenge against the same man, it feels difficult to really become engrossed in the storyline. Whether this is due to the way story missions are handled via gameplay or the way the game denies the player an ending until they play through the game twice, it is hard to tell. 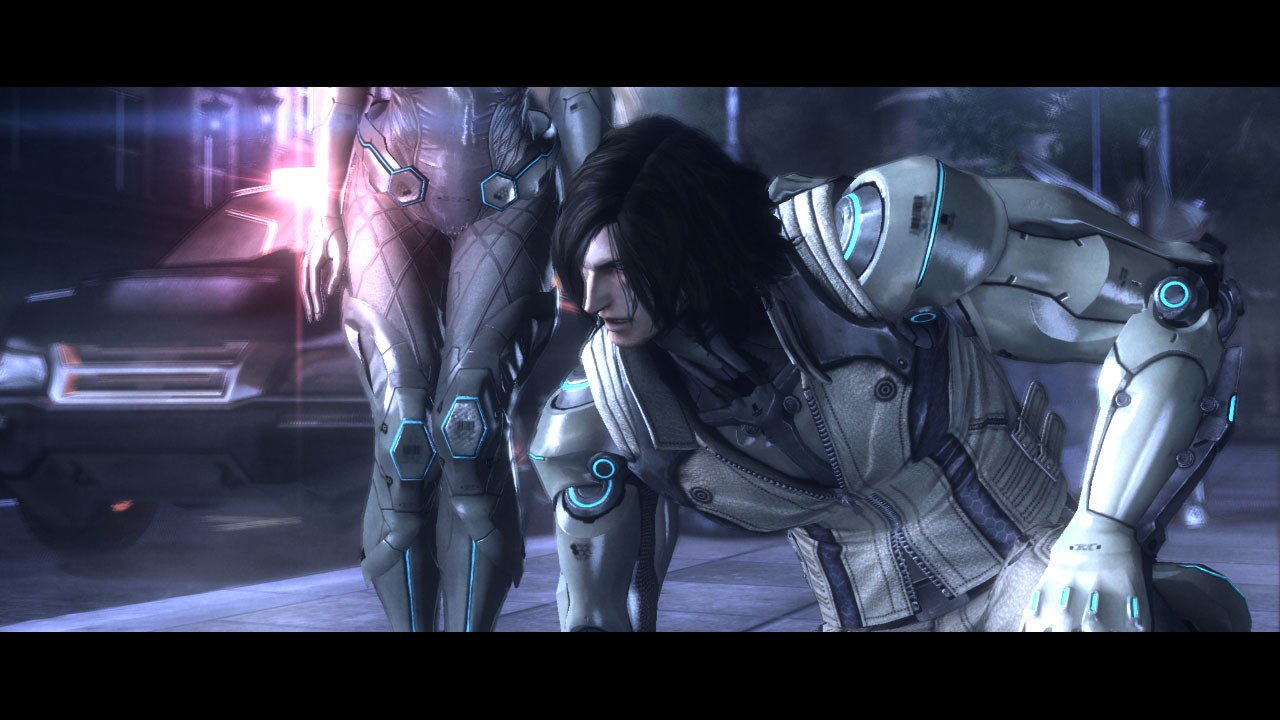 So while the game’s story may be a bit of a disappointment, the characters that the player comes across throughout both campaigns are the most colorful bunch of people you’ll run into. With some rather hilarious dialogue littered with profanity, most gamers will power through the story simply to see who will be shown next. Considering these stories are more or less the same (more on that later) they will run the player around four hours each, though the second half will feel like a slog-fest with a special finale rounding out the total length at about nine hours if the player chooses to rush through things.

Visuals:
As far as graphics go, Anarchy Reigns tries to keep things fresh by offering sixteen different characters, all of which have unique character designs and character-specific attacks. There are also a number of interesting arenas to fight at and each of these have a unique charm and mastering a stage’s design and layout is very beneficial for random events. That being said, most of the game appears rough around the edges and this is never more apparent than during the game’s story mode. 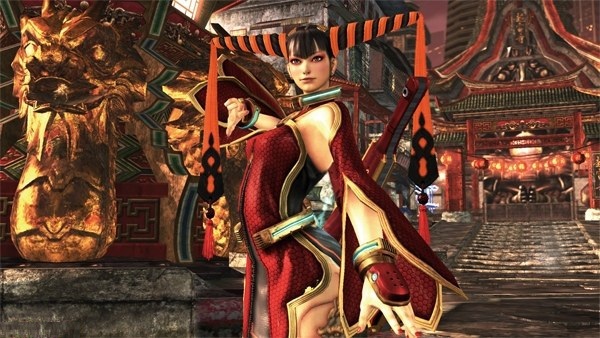 With the way the story is handled in Anarchy Reigns, players are forced to travel through the same areas twice and fight against faceless bad guys which mostly look alike. There are some unique designs here but thanks to repetition these designs fall by the wayside. Despite that flaw, whenever the player ventures into a multiplayer match or simulator match, they’ll find that the title runs flawlessly with little slowdown despite the fact that many of the fighters’ attacks are flashy and, in some cases, rather explosive.

Audio:
When Platinum Games looked for voice actors, one has to wonder what type of people they were looking for. Why do I ask this? Well the reason for that is the fact that the dialogue and the voice work for every character is so overdone that it is hilarious. The characters feel larger than life not only in design and power, but with their voice work as well, though this tends to be hit and miss depending on the character. 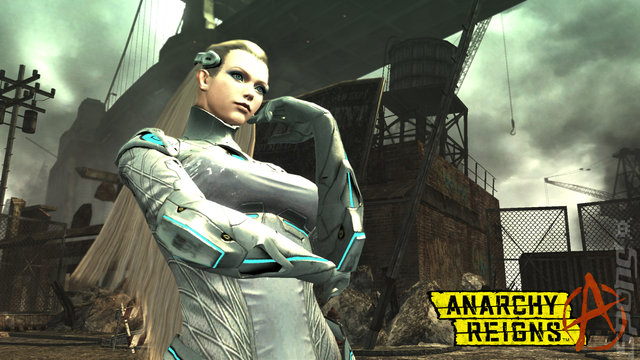 The hit and miss voice work is nothing compared to the sound track. Anarchy Reigns’ background music is incredible. There is simply no other way to put it. Not only does the game support a large number of songs that make it so it is impossible to grow tired of a song but each track feels like it fits the game perfectly for any given situation. In fact, it just wouldn’t feel like there was enough anarchy occurring without the accompanied background music.

Gameplay:
At its core, Anarchy Reigns feels like a title from yesteryear. This is for the game’s benefit however, as the reason it feels like an older title is the fact that there seem to be no titles aiming for the 3D brawler genre anymore and that is exactly what Anarchy Reigns is. Players will find themselves battling against up to fifteen other fighters in an arena that is not only littered with cybernetically powered players but plenty of hazards to keep an eye out for.

Combat in Anarchy Reigns may seem complicated at first, but easy to learn and master thanks to the fact that various attacks are broken up into categories. You have your basic weak and heavy attacks, grabs, ascending and descending mid-air attacks, killer attacks that deal heavy damage with the character’s special weapon, blocking, dodging, a rampage mode that will be covered later, 360 attacks and items you acquire. This may seem like a lot to take in at first and indeed they can be difficult to master, however Anarchy Reigns does what any fighting game should do, whether 2D, 3D or brawler… it makes combat fun. 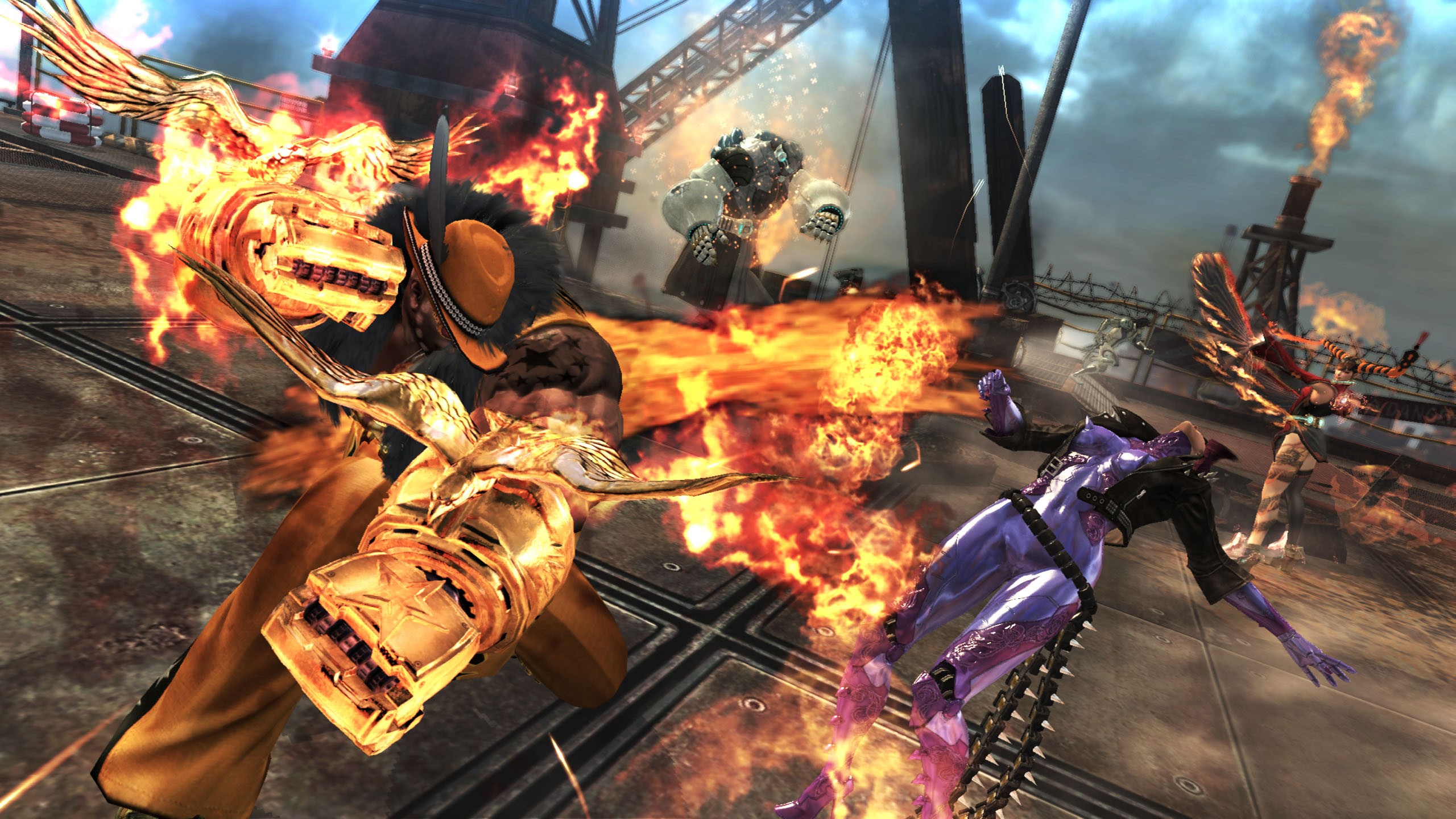 One thing to note is that the aforementioned killer attacks require a power meter to use and this can be charged through either giving or taking damage and even then these killer moves feature light and strong/finishing move versions. As for the rampage mode, it not only makes it so the player has an infinite number of killer moves, but they can unleash insane nearly unblockable combos on their opponents for a limited time. The tension really spikes when two rampaging players attack one another, as they will then be locked in a Dragon Ball-esque exchange of rapid blows with the players mashing a certain button to overcome their opponent.

It is worth noting that it is very easy to find yourself locked into a string of combo attacks and, after experiencing a number of online battles, many opponents really love to grab, however one of the best methods to avoid this is the 360 attack. These attacks may cost some health, but they not only clear out people around you, they often are great ways to break yourself out of a combo, often allowing the tide of battle to shift or a chance to escape.

Earlier you may have noticed that I mentioned the story modes are more or less the same, and the reason for that is that each story mode is unfolded through the same five stages that the player will have to go through. In these stages players have free-reign of where they can move, within the stage’s limits of course, and they can find hidden artwork or slaughter the mindless enemies that populate the stage. 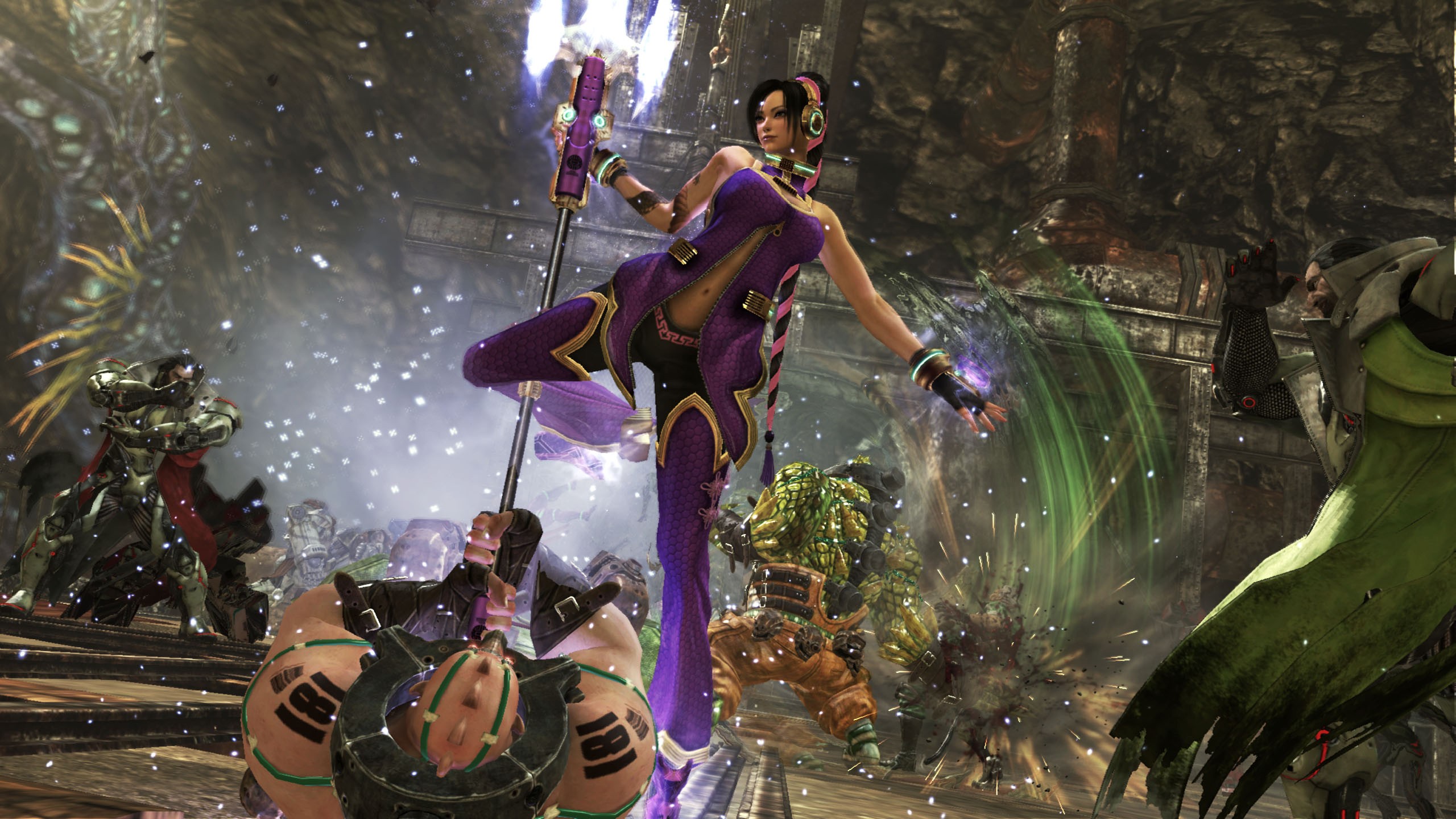 Slaughtering these basic drones is the key point of the story mode as players need to gather points by killing enemies to unlock the next story mission or free mission. Free missions can be played multiple times and are the best way to accrue points quickly. These little side-missions are usually very enjoyable as they put a new spin on things, though a few are rather annoying and troublesome, but these can be skipped.

In fact, the entire single-player story feels like something of a tutorial for the actual online multiplayer and simulation mode, especially when you consider how you will probably never try the story out a second time. Not only are players given a chance to unlock the rest of the characters for multiplayer but they will also have a basic grasp of the combat system before taking the fight online.

Before we travel online, there is an offline mode for gamers who want to take some time to either hone their skills or simply want to fight against some bots. This simulator mode allows the player to try out any online mode as often as they want with their preferred character. This means that you will never have to worry about not finding an online match, which can be a problem at times. That being said, it is unfortunate that Anarchy Reigns does not feature any local co-op. This means that you cannot play offline multiplayer with a friend via splitscreen which is a huge disappointment considering how fun fighting three other friends could be with this game. 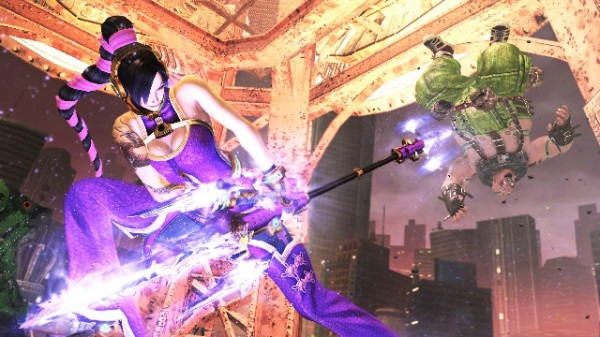 Now for the online mode, there is some good news and bad news. The online battles are often glorious slobber knockers with players taking on one another all over the map. There are a large number of online options to choose from, such as the hectic battle royale which sees 16 fighters taking each other on in free-for-all combat, some team modes involving deathmatch and capture the flag and even an online co-operative mode to fight against creatures.

Whichever mode you choose, you’re in for quite a time as these battles can be absolutely insane. The game relishes in the fact that there is so much action going on at any given time and will even point out when there is a massive fight going on in a certain part of the map, encouraging more fighters to join the melee. To make things even more chaotic, the arenas all feature random occurrences such as black holes that randomly place you around the map, poisonous gas clouds, carpet bombing and even AI controlled enemies storming the field to kill everyone. 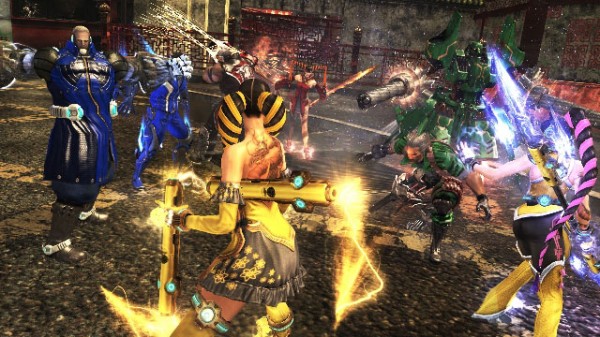 With so many crazy things occurring, it will be difficult to fight any battle that will end the same way. However it is unfortunate to note that, despite having a great netcode, the game doesn’t seem very populated and thanks to the way that the lobbies are set-up, it can take quite a bit to gather enough players for larger matches such as battle royale which require fourteen to sixteen players to stay in a lobby and ready up.

Overall:
Anarchy Reigns may have a few issues, such as online activity and lack of couch co-op, but despite these flaws, the game is an absolute blast to play. With over the top combat set to a stunning soundtrack Anarchy Reigns is practically a steal at its discounted price point and as such, this title was well worth the wait.