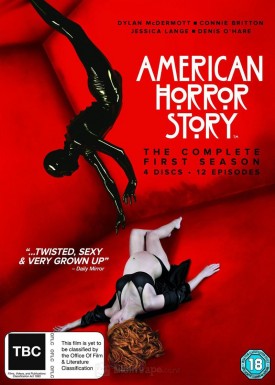 The Emmy award winning American Horror Story brought back to life (ironically enough) a genre that was all but dead in television. Never has a TV horror series been developed that has garnered the amount of praise, and the kinds of ratings, that American Horror Story has. The show’s fans are beyond a cult following, with 3.85 million viewers tuning in for Season 2’s premiere in the U.S, making it FX’s highest rated show. The brilliant homage to all things horror has now arrived on DVD. Read on to find out whether this Complete First Season, 4-Disc set, is worth selling your soul!

American Horror Story, Season 1, follows the Harmons, Ben, Vivien and their daughter Violet, as they move from Boston to Los Angeles in hopes of leaving behind a painful past and starting anew; Vivien had caught Ben, red-handed, as he cheated on her with a younger woman. Compounded by an earlier miscarriage – the effects of which Ben, a psychiatrist, indirectly blamed for his infidelity – the Harmons were on the brink of separation. They had hoped this new home, this new beginning, would be a godsend for them. Violet takes a liking to this new house, where the owners died in the basement. That fact, once delivered to the Harmons by the real estate agent, Marcy, was actually what sealed the deal in Violet’s mind as she exclaimed “We’ll take it!”. Oh, if they only knew…what they were about to experience would change their realities forever. 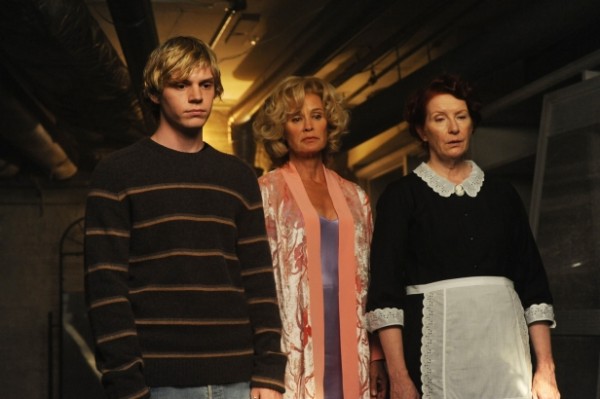 What’re they all looking at?!

As the pilot progresses, the Harmons are introduced to many new faces, including Moira – the former housekeeper who insists she continue working for them, Constance – the kleptomaniac and invasive next door neighbour, and her daughter Adelaide – or Addie for short – who suffers from Down Syndrome and also barges in whenever she wants. A gimp suit is found in the attic and comes into play (literally, with Vivien to be clear), while Ben sees his first new patient in a disturbed teenager named Tate, whom he banishes from talking to his daughter after finding them chatting in her bedroom. This is all just the start, the set-up…as the season plays out, new characters and backstories are introduced, almost consistently on an episode-to-episode basis. But it never feels bloated. Everyone has a story to tell and each lends to the lore and divulging of events that have occurred at the house.

Time passes, and Vivien is still finding it hard to be intimate with Ben after what he did. Things further complicate for the Harmons, including the discovery that Vivien is now pregnant (remember the man in the gimp suit?! She assumed it was Ben, right?), it starts to become evident that this house, the Murder House as it is dubbed by a touring company that passes by quite regularly, is host to many secrets and it’s death-filled past is much more extensive then the Harmons were led to believe. I can not go any further without spoiling the numerous plot twists and revelations that abound, but let’s just say that things get much stranger, much weirder and much more disturbing. It’s a hallowed roller-coaster ride that you should not miss! 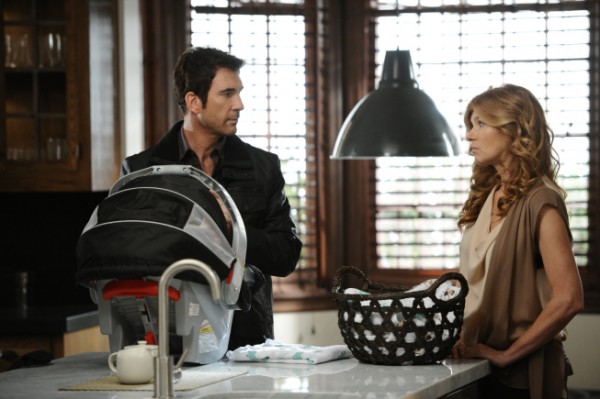 If I know my horror stories, that baby may not be the welcome addition to the family that they want…

American Horror Story is one of the very few shows to have been filmed in the older Super 35 format. The inspiration behind that decision is ostensible, as the show is a throwback to the old, gritty, grainy, classic horror films of the 70s and prior. With that in mind, know that the DVD transfer was never going to be crystal clear…it’s just not possible. However, I was still disappointed by the amount of graininess present, regardless of that fact. The disc menus and text also looked quite blurry. Colour-wise, there has been no degradation or over-saturation, and everything looks as it did on TV. In regards to the actual filming and camera work, American Horror Story utilises a consistent bag of horror hallmarks, such as the tilted angles and sharply edited jump cuts. The wardrobe, color-palette and set designs communicate that creepy tone and atmosphere so well, it’s probably one of the best aspects of the show’s production. 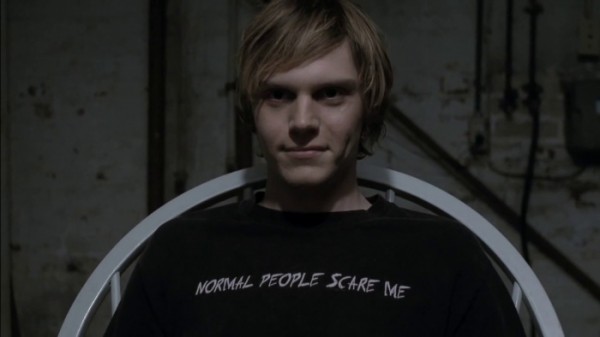 And you scare us Tate…

The audio sounds good in 5.1 Dolby Digital format, however the mix could have been better balanced as the volumes of the dialogue/sfx and music are, at times, seemingly poles apart. The commentary track is handled well, however, with the primary audio enhanced when Murphy is speaking, and the secondary enhanced when he is not so that you can those moments of the dialogue. Subtitles can be turned on during commentary, for either the commentary itself or the dialogue. Languages available for subtitling are of a peculiarly Nordic flavour, with English, Danish, Finnish, Norwegian and Swedish only.

The Complete First Season boasts one of the best, most informative commentary tracks I can ever remember listening to. Ryan Murphy, co-creator of the show, talks us through every detail during the Pilot episode. He talks about casting, filming experiences with the actors, behind-the-scenes tidbits, hints and symbolism that you may not have picked up on, camera choices and much more. Personally, I love learning about the film making process, so this was perfect. I just wish we could have gotten the actors’ takes on an episode or two as well, as I am intrigued to hear their thoughts on the shoot and subject matter. Rounding out the special features are four featurettes, all found on disc 4. First up is The Murder House presented by Eternal Darkness Tours of Hollywood’ – a faux tour of the infamous Murder House; a take off of the scenes in the show where the tour stops by the house, but does not enter, instead moving on to the next site. This 6.5 minute piece acts as a recap and chronology of the history of the house in the canon. 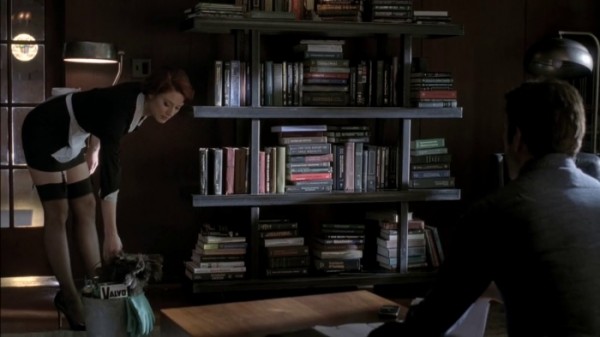 Mr. Harmon, you dirty dog, you!

Next is the ‘Behind the Fright: The Making of American Horror Story’, which is self-explanatory and the most in-depth piece at 23 minutes long. Then we have ‘Overture to Horror: Creating the Title Sequence’ – insight into the creation of the show’s creepy main title sequence. Ryan Murphy requested the team who did the main title sequence for the film 7even, and he got his wish with Prologue’s Kyle Cooper being brought in, per his request. The almost 9 minute video also details the composition of the title theme, which is a reconstruction of composer Cesar Davila-Irizarry’s unreleased experimental piece, “Creatura”. And finally, we have ‘Out of the Shadows: Meet the House Ghosts’ – a run-down of all the ghosts that wander the Murder House, with interview footage from the actors who played them. All up, some good extras, however they did end up covering some of the same ground. And I know there were deleted scenes that were not included, because they were alluded to by the show’s co-creator, Ryan Murphy, in his commentary track for the pilot.

The Complete First Season is a worthy DVD set with, for my money, one of the most insightful audio commentaries in recent memory making up for the other, slightly unsatisfying, extras. I would have loved to have seen more “on-the-set” footage instead of the shallow studio recorded interviews that dominate the bulk of the special features. The extras are a welcome addition, nonetheless, and the video transfer is fine considering the shooting format of using Super 35 film, although a bit grainy and soft at times. However, if you’re a fan, or a newcomer to the series, you should definitely buy this DVD set and (re-)experience the tale of the Murder House! If you’ve got the extra ‘cashola’ to spend, go for the Blu-Ray, which has DTS-HD Master Audio 5.1 surround sound and a 1080p/AVC image encode.