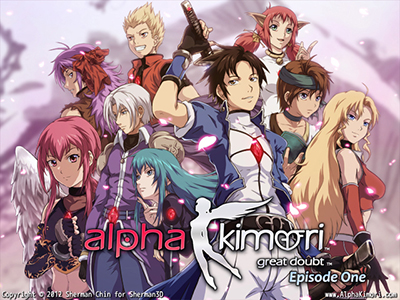 Overview
Alpha Kimori Episode 1, the start of a trilogy, is a little-known JRPG that was developed using RPG Maker and released back in 2011. Inspired by anime and classic turn-based RPGs, Alpha Kimori mixes science fiction with fantasy to craft what is a fairly original story. Read on to see what we thought of this brave attempt from an indie title.

Story
Alpha Kimori is set in a world 50 years after aliens have invaded Earth. Wait, don’t go! Earth isn’t featured at all here, because the game is set on the planet Kimori which is being fought over by two very different human factions. The Bidarians who are technologically advanced, prosperous and enforce hegemony through overwhelming military force. Worshipping their fallen ship Alpha and unquestionably ruled by the Elder Council, the Bidarians use mech units called Angel RICA (Robotic Intelligent Cybernetic Armor) and engineered warriors known as Kimorians that are infused with Ki Crystals. 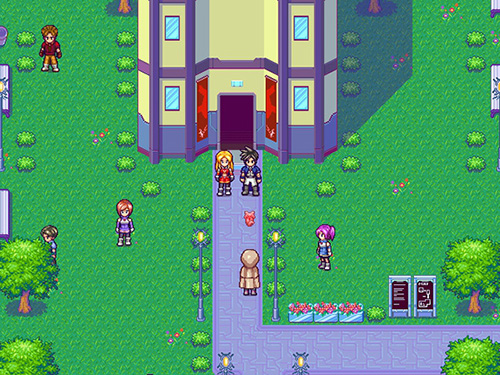 On the other side you have the Jinrians, humans who can transmute into huge beasts and have foregone violence and advanced technology to protect the planet’s native fauna, which harbour valuable Ki Crystals that are needed to power the Bidarian war machine. The clash of idealogies here is at fever pitch. Such a creative and unique background story came completely by surprise.

You play as Rick, a Kimorian warrior bred for battle but clouded with doubt ever since he met a Jinrian princess who convinced him that killing is wrong. The plot revolves around juggling his official duty and sympathising with the creatures he is forced to kill. I must say the game got dangerously close to overdoing this theme by constantly changing Rick’s position on the matter. I’ve rarely seen a character commit treason so often yet is free to pick and choose sides without suffering immediate consequences.

At 5 and a half hours long, the plot of Episode 1 doesn’t drag on and is definitely the highlight of Alpha Kimori. While a bit dull and padded out in the middle, the final battle’s revelations and cliffhanger more than made up for the occasional lull in story development. 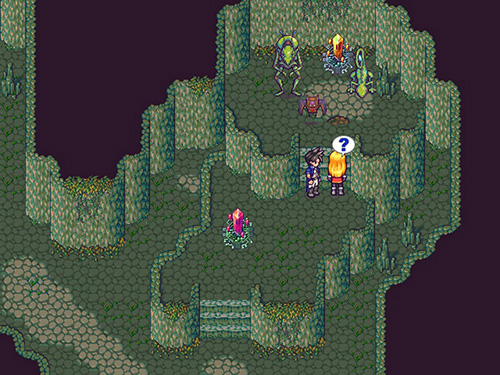 Gameplay
Sherman3D has managed to create an entertaining world containing most of the hallmarks of classic JRPGs. You have a major city, a limited outer world and several locations such as a Great Forest to traverse. While this is a tried-and-true system, it has one flaw which is painfully annoying once you have to backtrack. To reach the Tropical Forest, for example, you must head through two areas. Each time you’re sent on a fetch quest. Then again when you’re just about near the end and you’re forced to deviate from your path. 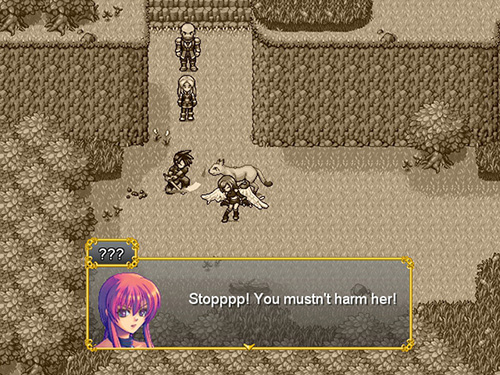 Combat is solid and works well. You have standard attacks as well as special moves that consume Ki, like mana. Once during the game you pilot the mech RICA unit, but you’ll be battling them the old-fashioned way most of the time. Unfortunately things can get a little repetitive but luckily the game wraps up in due time. You can equip a limited variety of weapons and armour that can be found or bought at the city’s shops, and a number of crystals are used to heal and empower your characters.

Visuals
Alpha Kimori is colourful with some really attractive character and art designs usually reserved for bigger budget RPGs. While the engine isn’t technically impressive, the team has made use of RPG Maker in a really skillful fashion. Something like this would feel great on a handheld and one can only hope these games make their way over in the future. The game weaves modern elements such as mechs with swords and magic, and the battles show this off to great effect.

There was only one noticeable slowdown during the final battle as things got very busy on the screen. But that can be attributed to the unleashing of a devastating attack that you get your hands on at the end. 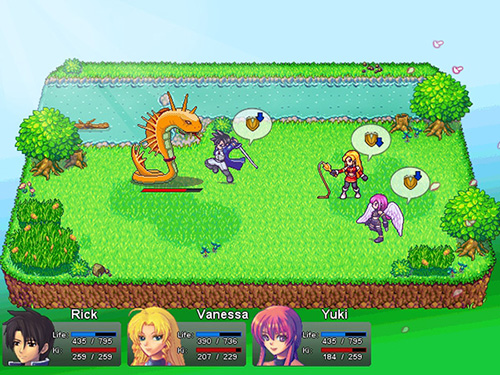 Audio
Aside from the beautiful title screen, the first thing players will notice in this game is the music. The catchy main theme of the game is sung by virtual idol Hatsune Miku and you’ll hear it several times during significant parts of the game. It’s a shame that the song is too short, however, and often keeps looping during a drawn-out boss fight for example. The rest of the music sounds great and is very typical of a Japanese RPG. The only problem is the lack of variety in music, and by the end you’ll be hearing one of the tracks over and over in your sleep.

The final boss battle featured an amazing piece of music, though, and was a refreshing reward after spending five hours hearing a couple or more tracks in total. 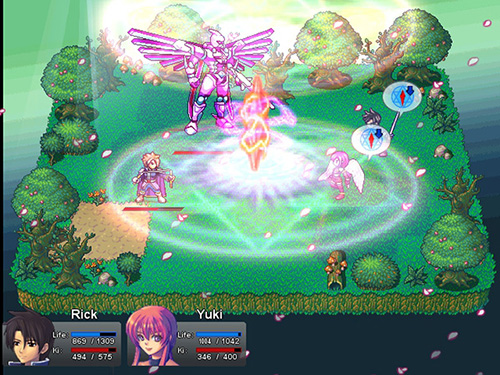 Overall
Alpha Kimori Episode 1 is a worthy attempt at a JRPG in indie form. It hits all the right notes while delivering a wonderful concept and plot that is sure to heat up in Episode 2. The science fiction elements had me thinking back to Star Ocean, while the moral and philosphical themes reminded me of our modern society and in particular a certain dominant superpower today. At a budget price I can wholeheartedly recommend Alpha Kimori despite a few flaws, especially if you’re a little weary of some of the rehashed and tired themes of JRPGs that we’ve seen this past generation.