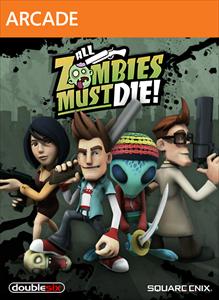 Overview
I was cautious that All Zombies Must Die! was going to be just another zombie game that joins the plethora in existence. However, I was pleasantly surprised to enjoy its humor and gameplay which bests most of the action, adventure genre. Hordes… and I mean hordes of zombies will make you understand why “All Zombies Must Die!”

Story
The story begins with our gamer freak Jack in the town of Deadhill. A zombie apocalypse has broken loose, and our gamer must find any survivors to help him in his quest. Eventually you team up with Rachel the not-so-friendly girl, Brian the scientist, and Luxo the alien! These unlikely heroes must unite their abilities in order to stop the end of the world.

Gameplay
All Zombies Must Die! is primarily an arcade shooter format that requires the player to not only use the two analogs but also a trigger to shoot. With the left analog as movement and right analog as aiming, the right trigger is used for shooting ranged weapons or swinging the current melee weapon. Additional buttons include (A) for finding hidden items and conversations, (Y) for the character’s smart bomb attack, and two button combination (LT) + (RT) for the character’s unique item (i.e. Jack’s torch, Rachel’s cellphone). Other buttons like the right bumper and (B) cycle through character’s primary, secondary, and unarmed weapons.

Weapons provide an unique feel varying from melee attacks to ranged shots. A shotgun will not provide the long range nor amount of bullets like an assault rifle, but it does have a wider affected range. There is even a drastic difference using the cricket bat in multiple forms. By continually swinging the cricket bat, the player will do minimal damage while keeping the targeted enemies delayed. Charging up the cricket bat will deal out lethal damage and send the zombie flying off the screen. The drawback for the cricket bat is that unarmed fists can do more basic damage. 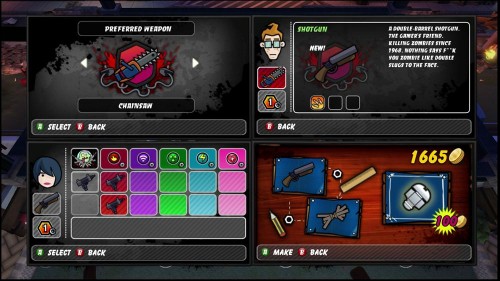 In addition to varying weapon types, players can also augment the weapon they are using to attain an elemental attribute. My favorite augmented weapon is easily the fire enhanced chainsaw. To make the chainsaw not overly powered, it requires ammo once the fuel has depleted. Weapons like the fire chainsaw can be created by picking up special items in specific map areas. A special quest appears in the Town Square offering a gift when the player kills 30 burning zombies. Once the quota has been met, firewood will drop and can be used to augment a weapon at the base.

The base or safe zone can be moved or created by initiating that zone’s quest for All Zombies Must Die! In this quest the player must kill all zombies spawned onto the map to clear the entire stage. Once this has been completed, the area will be zombie-free for as long as the base is kept at that location. At a safe zone, players can acquire quests from inactive characters, create new items, level up character stats, or even interchange primary weapons. 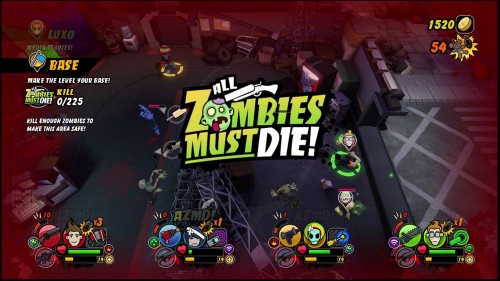 One annoyance that seems to surface after completing a quest in an area is when the security gates require an additional quest to pass through. Granted these quests do not take long to complete, but I would prefer to travel from one zone to the next without interruption especially when I am close to death. Several times I have acquired a quest item to merely come close to completing the level and died due to minimal health and lack of ammunition. On a positive note, some gates allow you to decline the given quest for an alternative – I just really don’t want to kill 25 enemies with the cricket bat.

Death is simply inevitable once you run out of ammunition during single player. Being without ammunition and having gate requirements can deter you easily into a corner with only fists as the last line of defense. Conserving ammunition for guns is not always necessary but being resourceful is. By clicking down on the left analog, several pop-ups like weapons and quest markers will appear with arrows pointing towards their locations. Locating additional guns will provide ammo for your primary and switch the secondary weapon to the pick-up. This handy tool-tip can save lives and most importantly kill zombies. (Achievement Alert: Kill 500 zombies in a single zone.) 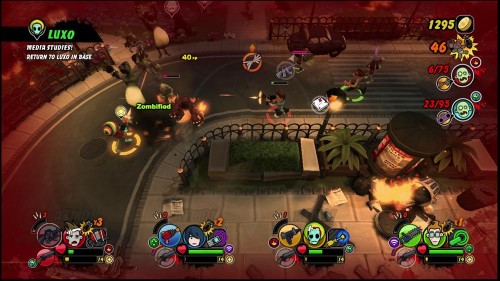 When discussing multiplayer normally you may experience online and offline modes. Sadly, the only mode available is offline co-op. Local multiplayer provides players a chance to escape the inevitable death spots. Having additional partners on screen allows for chances of resuscitation by pressing (A) above the dying teammate. Nothing like killing zombies and saving lives.

Audio/Visual
Designing the levels must have been very intriguing to know the most combative areas and where items were placed due to that proximity. Hidden items are identified with a magnifying glass and can hold health, ammo, quest items, and experience. These areas are visually teasing and can provide life or death. Opening a hidden item is not worth being trampled on by a horde of zombies.

Animated environment effects are brought to life in different zones. Power Plant offers several attractions that can be utilized by the player and be attractive looking. Once the power plant has been reactivated, electric lines that were disabled come alive with flowing currents. As zombies pass by, there is a chance they will alter forms and gain an electric attribute. Another instance can be seen on the Bridge where there is a radiation leek. Zombies that fall prey to the pool will become contaminated and grow into a mutation. 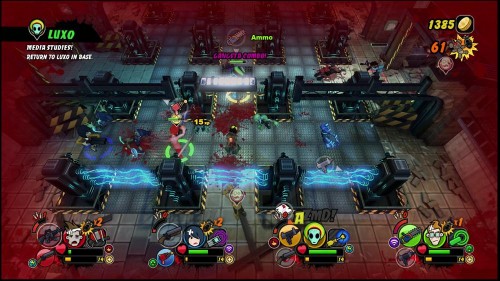 All of the conversations between characters are text-based. Nothing makes me happier than skipping all the mumbo jumbo that Jack spews out of his mouth. We understand that you loving playing video games and that you think that you are in one. Congrats, now get out of my text!

The opening music does an amazing job in capturing the silly zombie killing action provided within the game. Neither eerie nor too hardcore, you will notice an upbeat flow that carries from menu to menu. Although after finding Lexo the alien, I began to question whether or not the music was created to represent zombies or him. Must be some connection with zombies and extraterrestrials.

Item sounds are loud by default. If you do not recognize this at first, grab a hold of a chainsaw and have at it. Being my favorite weapon, I decided to turn the sound volume down a notch or two.

Overall
All Zombies Must Die! does well to shove other twin stick shooters out of the showroom. Offering item creation, upgrades, and character advancement shows that RPG elements can be added successfully to other genres. And what other zombie game has an adorable alien in it?

Some negatives must be taken into consideration. The zombie grind can get awfully repetitive when moving from quest to quest. Required items and zombie appearance may change, but the objective of killing zombies stays the same. Additionally, there isn’t an online multiplayer. This is potentially the most disappointing and damaging aspect for the game. For those without people to join locally, this would have been a nice social integration.