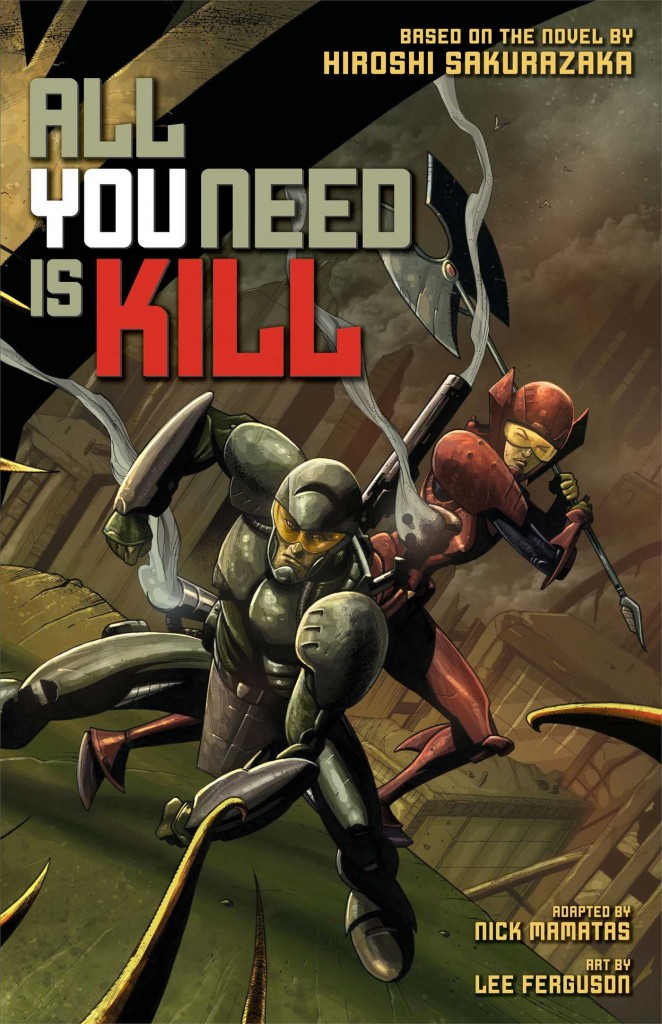 Overview
There is a good chance that until a few months ago, you may never have heard of Hiroshi Sakurazaka’s novel All You Need Is Kill. However now that that novel has been adapted into a Hollywood movie called Edge of Tomorrow, not only have manga adaptations been created but even a western style comic of the novel has been produced for North American release. However is this graphic novel simply a quick cash-in or something that is good enough to stand on its own?

Story
Earth is under attack by alien creatures called Mimics and despite the best efforts of the United Defense Force, humanity is gradually losing the war against these creatures. As such when we join soldier Keiji Kiriya he is the last man in his unit left alive, unfortunately he won’t be for much longer and the only person keeping him company is doing so because she needs to take equipment from his corpse.

Such a bleak ending isn’t the end for Keiji however as he wakes up in his bunk like nothing ever happened. Despite the strange feelings of déjà vu he continues his day like usual, only to enter battle against the Mimics once again and see that everything is unfolding the exact same way as before. Keiji realizes that he is stuck within a loop of death where he is forced to live the same day or so every time that he is killed.

Instead of despairing about his situation, after hearing some advice from his trainer he takes every loop as a chance to better himself by learning new techniques, mastering the ‘Jacket’ armor soldiers wear, and wielding a weapon capable of actually slaying Mimics without leaving yourself too vulnerable to attack. After dying over a hundred times and seeing things unfold this way, he realizes that there is something different about a certain enemy Mimic and by doing so, he catches the attention of the “Full Metal Bitch” Rita Vrataski, the US’ heroic female fighter.

From then on we learn about Rita’s past as well as her own situation of being stuck in the loop created by Mimics that explains how they are able to defeat the forces of humanity so easily. By discovering a way to escape this loop and take advantage of his abilities, the two continue to battle until the stark truth of the situation forces Keiji to take drastic action.

Now… it is obviously difficult to try and present a novel that is over two hundred pages long in a comic book that is less than a hundred pages. So some things need to be watered down but unfortunately there are a lot of things from the original novel that are watered down so much that readers are presented with the bare minimum detail.

There is generally no transition between scenes as Keiji and Rita jump from situation to situation and while some details of their situation are explained, it is so threadbare compared to what is explained in the actual novel that readers will probably be scratching their heads a bit at the twist that the writer throws at readers in the last few pages.

Artwork
As I mentioned earlier, this release of All You Need Is Kill is being handled with a Western style theme meaning the artwork is styled similar to comic books. Therefore it shouldn’t be too much of a surprise to hear that Lee Ferguson, the main artist for this release, has worked on numerous comics in the past including some X-Men series and his own series called Miranda Mercury.

The art provided for this release is nicely stylized with a great representation of the Jackets that the soldiers must wear into battle and the Mimics are also notably alien looking and although any amount of gore is kept to a minimum there is a nice sense of action as well as drama in each panel thanks to the coloration of certain panels’ backgrounds.

Overall
All You Need Is Kill’s graphic novel adaptation is by no means bad, but it significantly dilutes a lot of details that readers would need to actually get the most out of the story. Thankfully it does have all of the major details to convey the overall story of All You Need Is Kill as well as some nice looking artwork, but it feels like this release would have benefited from being longer so the author could properly convey the missing details that end up making the story better.