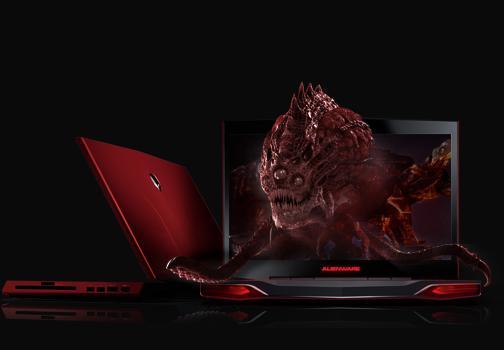 I think that this is actually a first for this website. We’ve gotten to review many different kinds of PC peripherals in the past, we’ve also reviewed things as strange as iPhone cases. However – I’m reasonably certain that this is the first review we’ve ever put out for a laptop. As such, this may seem a little messy as we don’t really have a preset method of writing for one of these things and if it does become a huge mess; I apologise in advance. Now that we’ve gotten that over and done with, it’s time to move into the review.

The M17x is the current mid-range laptop in the Mnumberx line of laptops from Alienware. This product line contains the following machines: the M13x, M17x and the M18x laptops. Each one of these varies in power, with the M13x being the weakest and the M18x being the strongest and most powerful. The M17x is the unit that we have received and as a mid-range gaming laptop, you -really- can’t ask for anything better. 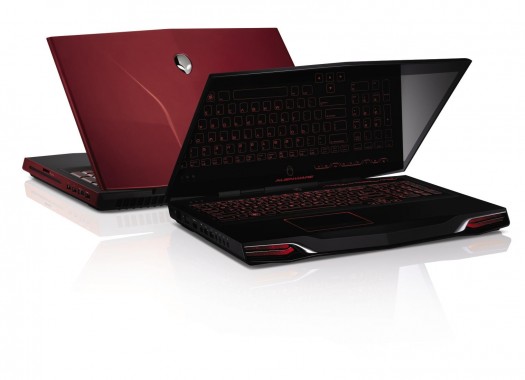 The first things I want to talk about are the machines gimmicks. The gimmicks in this case would be the things that make the device unique in comparison to other laptops on the market. So obviously, these things might be superficial, but others are a little functional.

I’m going to talk about some of the more superficial features first. As you may already be aware, Alienware machines generally are not very plain computers. In fact, the M17x was actually a really pretty machine. For instance, it came in this really nice reddish carry bag that, when removed, revealed a more pretty maroon-ish laptop within. Upon opening this unique looking lid (with grooves and stuff), you are greeted by a pretty flashing looking keyboard and control panel.

Powering on the machine took a few moments for me to work out, as the Alien face power-button initially looks aesthetic only. However, it is not. Pressing this button lit up the entire control panel and keyboard, as well as the monitor. What was really cool about the powering on, was that it took an incredibly short period of time to go from POST to Windows. By default, the keyboard lights up with the default Alienware theme of blue, purple and some other colours, IIRC. However, you can easily modify this theme by pressing a button on the devices control panel whilst in Windows.

What was also really good about this particular machine is that it has an abundance of ports for your various devices. These were also located on both sides of the device, however I think the side with the Blu-Ray player had slightly less. Have three pairs of headphones? Why not plug them all in at the same time? The only detriment to this, I found, was that at night, it was incredibly difficult to see which jack did what.

The laptop is also running a graphics card and monitor that is 3D compatible. That is, it is running a 120Hz monitor with incredibly fast response times. And a graphics card that is strong enough to render two images together and keep up with the monitor. Gaming in 3D, watching Blu-Rays in 3D – it is all incredibly awesome. Like, really, really, awesome. However, the only negative to having 3D is that you have to wear these bulky-as glasses which sit on your head in an uncomfortable fashion. Why not do some magic like the 3DS does to make the 3D? The laptop should be sitting a similar distance away from your face anyway.

Okay, now moving on to the stuff that is most important to us gamers. How does it handle gaming? Well, I can tell you that I tested a bunch of hardware hitting games under a few different conditions to give you a fairly accurate description of how it is that the laptop performs.

The M17x is a brilliant gaming machine that is capable of playing the latest of games at Max – or near Max – settings. Or at least, it has this capability so long as it is plugged into a wall. Unfortunately, whilst it is unplugged, it does not handle gaming half as well as it does plugged in. As someone who is only mainly technically able, I assume this has to do with the graphics card not feeding enough power out of the battery without the power cord. However, with the cord in, it is a beautiful gaming machine capable of so much awesome.

If you’re the gamer that really can’t play without a power point nearby, you will find that gaming severely drains the laptops batteries. In my play session of a few different games of varying qualities, I only managed to pull out about an hour and a little bit of gameplay before I started noticing a bunch of graphics processing errors. When returning to Windows, it was evident that the laptop was about to run out of battery power. Cunningly, I was able to retreat to a power-socket and find some extra juice.

The laptop also has some pretty decent built-in speakers. These were particularly useful whilst I was partaking in an impromptu LAN-party at a mates place. Having quality speakers on a laptop makes all the difference whilst gaming. While having a pair of gaming headphones will obviously increase your gaming experience whilst playing by yourself, in a LAN situation where annoying the crap out of your mates and opponents is part of the fun, having a good pair of speakers is particularly useful. 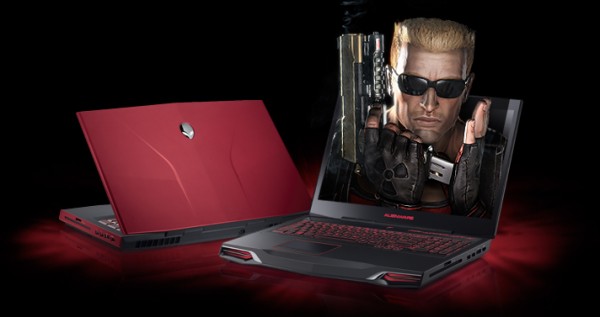 In my honest opinion, this laptop is a great supplement to the average gamer that is often out of the home or frequents gaming events such as LANs. This is not just because of the great amounts of graphical performance whilst plugged into a wall, nor is it just because of the pretty cool audio set up. But it’s also because the laptop isn’t really all that heavy to carry. For something as powerful as it is, I was expecting it to weight a hell of a lot more than it does.

From memory (as we’ve since returned the device), the laptop we were given had a whooping 16GB of RAM, 2TB of HDD space, the latest in nVidia graphics technology and a fairly awesome 2.7GHz i7-something or other processor. When you’re purchasing from the Alienware website, you are actually able to add and remove from these components, so individual mileage may vary. It also has an amazingly good wifi device. I can’t remember it’s name off the back of my hand, but it could run in the N range and was able to connect at a much higher speed to my modem than the dongle I’m using for my PC.

Overall the Alienware M17x laptop is an amazing gaming device for the gamer with portability in mind. It handles all current games incredibly well and it has nearly no flaws. The only negative points about the device are quite minor and were probably only encountered because I was adamant about gaming under all conditions. Users will be thrilled to own such a magnificent machine.