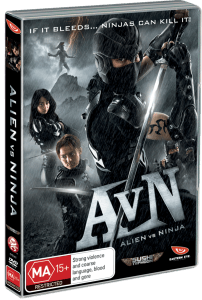 I suppose it’s only fitting that this was the tag line, because that’s what I was saying for the entire duration of watching the film. It was only when I jumped on to Google and looked up the IMDB page for this movie that it clicked…this is a comedy, and I had missed director Seiji Chiba’s entire point. Suddenly, all the ludicrous aspects of the film and the moments where I said “seriously…” began to make sense, and I could breathe a sigh of relief.

With a name “Alien vs. Ninja”, it’s pretty hard to take the film seriously even if it wasn’t a comedy. It sounds a little bit like that book Pride and Prejudice and Zombies, and it goes down the same path. AvN takes on a satirical approach to sci-fi films such as “Alien vs. Predator”, and ultimately serves up a ridiculous clash of Eastern and Western action and horror cinema which would never happen anywhere else. In concept, film like this sound great. In reality, I’m not so sure about how they managed to pull it off.

The story follows a band of ninja warriors led by Iga ninja Yamata (Masanori Mimoto). One day after blowing up enemy Lord Oda’s castle, the warriors are chased into the forest by some of Oda’s men. While in the forest, the ninjas see a fireball crash into the forest and are sent by their village Master to investigate the potential threat, which is assumed to be the work of Oda again. What the ninjas find instead are bloodthirsty aliens who proceed to attack and feast on any victims they can find, and a boy from a distant village who saw the aliens slaughter and kill all the people in his community. The aliens are immune to throwing stars, swords, and even guns, and together the ninjas must find another way to rid their world of these creatures. 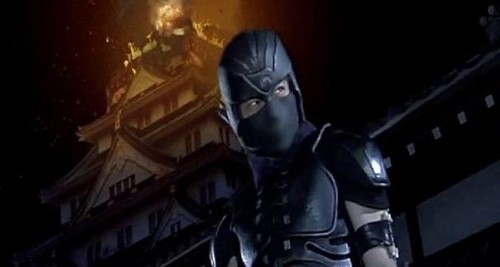 The fact that the ninja weapons don’t work against the aliens is a little bit of a paradox, and inevitably turns the movie more into “Alien vs. Throw anything you’ve got at them”. Overall it’s a solid storyline that doesn’t leave audiences too confused over what’s happening, but halfway through the film I began to wonder if I was watching ninjas or kung fu. I will say, however, that the combination of aliens and ninjas was pretty awesome, and was a great amalgamation of heroes in traditional Asian cinema and monsters in Western sci-fi.

The plot is a cookie cutter storyline, although a few funny twists took the story to ridiculous places I wouldn’t have expected. There was no real sub-plot; throughout the entire film I was focused on one story which I suppose makes it easy for the filmmakers to do improbable things because no other story will suffer. In a way, I wouldn’t have expected it any other way although and it was really the ridiculous twists in the storyline which give AvN a little bit more life and hilarity.

The script is also very corny and flat, with most dialogue being either crude, cliche, or just plain unnecessary. I understand that satires and parodies don’t necessarily look for the best script as it’s supposed to be bad, but it really wouldn’t have killed the scriptwriters to think a little bit more about what the characters are saying.

The three ninja warriors in AvN are Yamata, Jinnai (Shuji Kashiwabara), and Rin (Mika Hijii). There is also the boy from the village, Nishi (Yuuki Ogoe), and Nezumi (Donpei Tsuchihara), a fellow ninja who is extremely cowardly and with the warriors from the start.

For the most part, the characters were one dimensional which is what you’d expect. However, I really didn’t like most of them and as per any satire, they were more there to satirise than to serve any real purpose. As with the plot, the characters are cookie cutter: Yamata is the strong one who always goes against what he is told, Jinnai is the quiet, brooding one who protects but doesn’t reveal too much about himself, and Rin is the token female who has to deal with quips about her being a woman. Nishi is a weak boy who needs to get stronger and Nezumi is a massive chicken (there’s always one, isn’t there?). Every character is sex obsessed too (and when I say every character, I mean the aliens too), which definitely adds comedic value to the film. 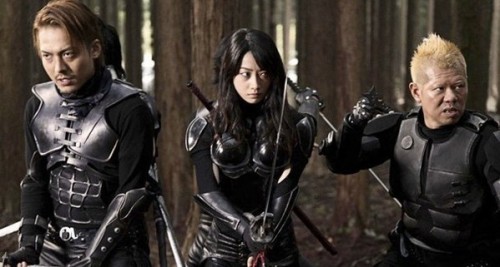 Chiba develops the characters a little bit – there is a scene where Yamata and Rin reveal why they became ninja, but this felt very awkwardly thrown in. It would have probably suited me more if the characters had just stayed one dimensional the entire time instead of trying to gain some sort of audience sympathy. Also, the acting is very overdone but not in the typical Scary Movie sense – in Scary Movie, the characters are overdramatic but at least believable as actors. Instead, you end up with an amalgamation of overemphasized angry looks on Yamata’s face, and strange half laughing, half angry looks on Rin’s face.

In all honesty, I’ve heard a lot of people say they hated Nezumi but I think he was the least one-dimensional character. Even though he is cowardly (and when I say cowardly, he runs away from everything and would sacrifice his fellow ninjas in the hope that he will stay alive), his fear is completely justified and probably more relatable than the likes of Yamata who seem completely fearless. Nezumi’s expressions are so extreme that he really portrays a bimbo-like character common to Asian cinema, yet at the same time he is funny because of how extreme and ridiculous he is.

The special effects – if you can call them that – are probably the most ridiculous thing in the film, and the most funny and great aspect because they’re just so ridiculous. The film clearly did not get a high budget, and Chiba used that to create visual and audio that was so bad it was good.

The aliens for starters look like giant walking dolphin toys and let out little creatures from the holes on top of their heads; the little creatures themselves are obviously little squishy toys the props department found from a dollar store somewhere. The aliens are really just people in costume and made to resemble human weaknesses, so it’s great when Rin punches one in the crotch as a means of defeating them. 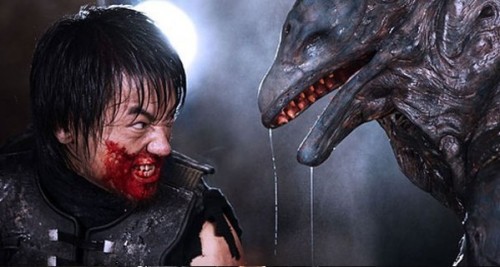 Explosion-like effects are also used when the aliens reach up from under the ground to drag their victims and eat their bones. These explosions are more like the cut-and-paste effects you’ll find in iMovie or Windows Movie Maker than real explosions, which again are so clearly not real that it’s laughable.

The sound effects and soundtrack were pretty average for this film. Of course the sound effects were also taken straight from another source instead of generated by the AV departments, but where the audio could have been so much better was the soundtrack. The song for the final fight scene (without giving away anything about the story) is a strange mix of J-pop and J-rock, but going with the overall film I would have felt a Japanese cover of Survivor’s Eye of the Tiger would have been much more fitting and not difficult to do.

The DVD really only comes with an extra couple of trailers. Some US ones may have extra special features, but as far as I know mine only had the AvN trailer and a few extra Eastern Eye trailers. It’s nothing to write home about, but it is good to have the trailer on there in case you want to watch it.

The easiest way to put it is this: if you watch this film prepared for ridiculousness, you will get a lot more out of it than expecting a lyrical masterpiece. When I went back and watched it again, it was a lot better just because I knew exactly what it was about. With that being said, this is not a film for those without a gory sense of humor (or a sexual one, at that), and it really isn’t anything you’ll write home about. I’m still in two minds whether it was brilliant or whether it was ludicrous, and I think the only safe thing to say is that AvN was brilliantly ludicrous. Crack open a beer and have a good laugh while watching it, then shelve it and pull it out on a rainy day.

I give Alien vs. Ninja