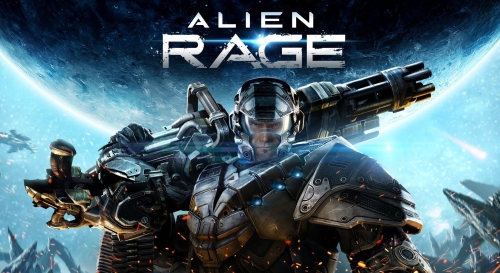 Overview
CI Games, the creators of the Sniper: Ghost Warrior franchise, are back with a different kind of beast in the cage. Though the Sniper franchise has been lukewarmly received by most, CI Games is looking to bolster their lineup with Alien Rage – their new fast-paced, sci-fi first-person shooter. How does Alien Rage hold up? Should we unleash the beast or send it to anger management classes? Let’s find out. 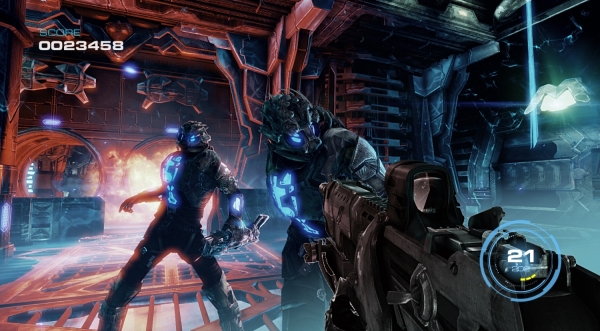 Some enemies will be on your before you can blink.

Story
Alien Rage tells a tale familiar to fans of the first-person shooter genre. Resources have become increasingly scarce on earth and everyone is scrambling to find an alternate energy source. The United Earth company finds an asteroid packed with promethium – a fuel source that could power the entire world. They quickly stake a claim and begin mining, but the Vorus (our resident alien race) soon show up, running humans off the energy rich asteroid. Now it’s your job to go in and destroy it all. Yep, that’s right. If we can’t have it, then nobody can.

Gameplay
Players take on the role of a space soldier. He’s given a name, but it’s inconsequential. He’s defined completely by heavy armor, big guns, a face tattoo, and the attitude of a toned-down Duke Nukem. He’s there to kill aliens and blow things up, and that’s about it. 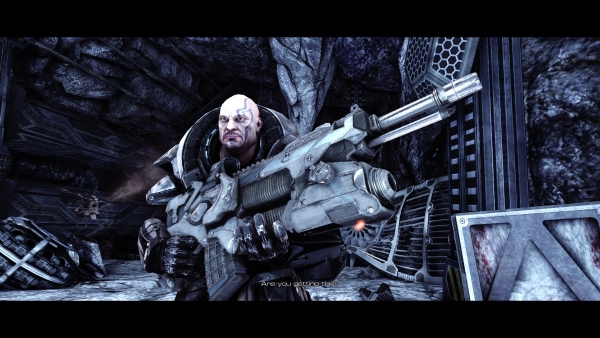 Space soldier with an attitude, reporting for duty!

Alien Rage‘s true strengths lie in its combat, which is great since you’ll be spending most of your time in it. You can carry a pistol and two other guns at any given time. Those other guns can range anywhere from SMG and assault rifle to Vorus blasters and rocket launchers. Each gun handles wonderfully, and they’re all equipped with a unique secondary fire that gives you some good options for situational combat.

On top of the basic shooting mechanics, Alien Rage has a heavy arcade feel to it similar to arena shooters like the Unreal Tournament series. You’re rewarded for headshots, multikills, melee attcks, environmental kills, and more. There’s even an announcer to shout it to the world. It’s a fun mechanic that adds to your engagement with the combat.

The level design, though modernized, feels as though it were pulled out of a Doom title back in the early 2000’s. Each mission has a set path you will have to work through with very little choice to offer players. Invisible walls block anything off the path to the end. This corridor-focused level design has both pros and cons. It obviously restricts how you can tackle encounters. On the plus side, though, it keeps the pace of combat cranked up. You’ll constantly have to maneuver, dodge, and counter-strike, which plays well to the strengths of the combat. 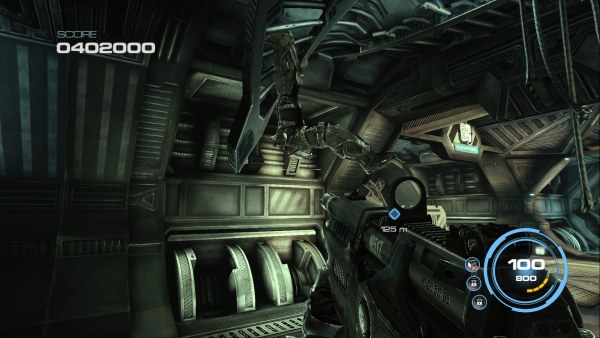 He was hanging around, but had to split.

Hidden throughout each of the 14 stages are six items for you to uncover. You’ll find “bonus” items and audio logs. While the bonus items serve to up your score, the audio logs are genuinely interesting. They give you pieces of the story of a human scientist working in the compound before the Vorus attack. While they’re not required to progress, they’re well told and offer a genuinely interesting tale to an otherwise drab story.

You’ll encounter a variety of Vorus on your mission. Apart from vanilla soldiers, the Vorus employ explosives experts, cloaked units, spider bots, and more. They’ll throw everything they have to stop you. When that fails, you’ll encounter several nasty bosses.

The game’s AI can be both devilish and foolish. More often than not, as soon as you walk through a doorway, you’re greeted with a barrage of enemy fire, even though no one has seen you yet. They’re completely unforgiving, relentlessly mowing you down as swiftly as possible. On the other hand, if you can fool them, an entire room of Vorus will run right at you one by one, leaving you free to dispatch them easily. 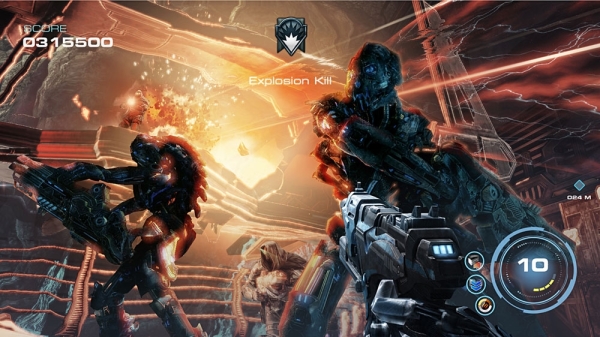 Boss battles are a different beast. They offer a solid mix of intense, high octane combat while you figure out their weakness or pattern. They can be frustrating, but they’re a lot of fun and quite rewarding.

My biggest complaint with Alien Rage has to be the checkpointing system. Checkpoints are often spaced 2-3 encounters apart with no way to save between. This may not seem too bad, but an encounter can often involve 10-15 enemies eager to kill you. Fight through the first encounter or two, and you can still be ambushed before the checkpoint and have to do it all over again. When you couple relentless AI with poor checkpointing (and no save system), it’s a recipe that can only end in frustration for your players.

Visuals & Audio
Alien Rage is a beautiful game in motion. Everything looks crisp and fits in line with its unique aesthetic. The lighting in the game offers a pleasant glow amidst the chaos of gunshots and explosions. Enemy design is satisfying, somewhere between Killzone‘s Helghast and Halo‘s Covenant, though more menacing than either. Animation is crisp and fluid, with each round fired relaying a sense of weight and confidence. There is some occasional texture pop-in, but when everything else looks so jaw-dropping, it’s easily forgivable. It’s really fun watching this game in motion, especially when the heat is on. 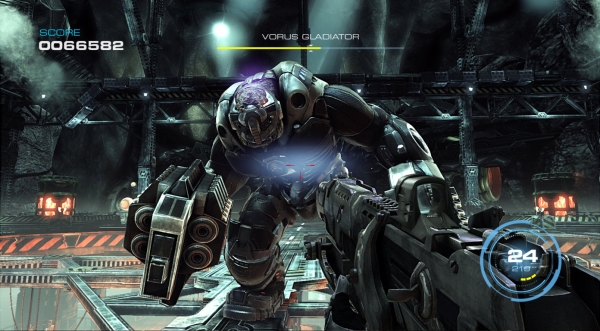 Sound design feels somewhat hit-or-miss. The sound effects are excellent, with each gunshot and explosion packing weight you can feel. The soundtrack also does a good job keeping your adrenaline going. The weak part, though, is the cheesy dialog between the player and his teammates, cracking off the occasional cheesy one-liner when he’s not the otherwise-silent protagonist.

Overall
Though Alien Rage feels dated when comparing it to modern shooters, it is a terrific experience. It embraces the fact that many of its design choices are meant to play to old-school sensibilities and it’s a better game for it. Though enemy AI can be infuriating and the checkpoints are too far spaced out, the core gameplay feels fantastic. Combine that with incredible visual design and animation, and you’ve got a great old-school shooter for a budget price. Fans of old-school shooters will definitely want to give it a try.