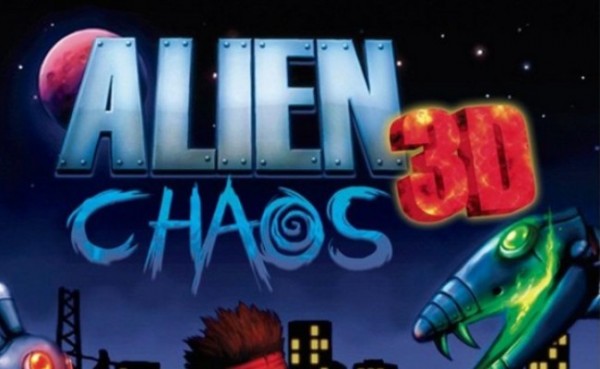 I never played Alien Chaos 3D’s predecessor, ‘Mama & Son: Clean House,’ so I came into this with no preconceived notions of style or quality. More’s the pity too, because going off the name alone here does no justice to what’s inside the box (does that phrase apply to downloads?) This game is a clean shooter. Alien Chaos 3D plays to the advantages of being a portable game, making the most of not being confined to a mobile device. It’s fast, super hard and highly replayable. 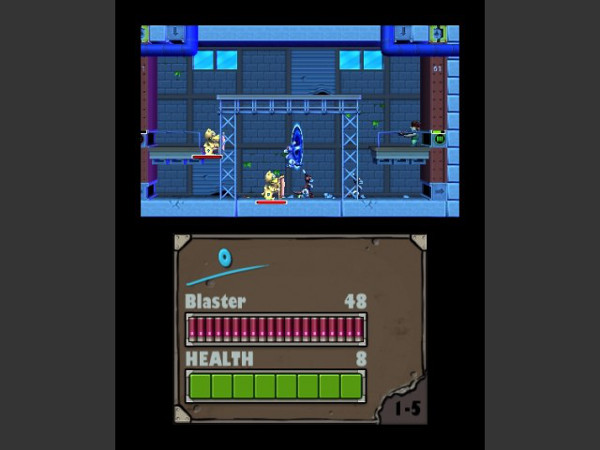 Really Shooter owns and runs a cleaning and alien elimination company with his mother, Mama. While out on the job cleaning offices in the city, Mama is kidnapped by aliens. Presumably because you had both valiantly fought them off in the first game but that’s inconsequential. What is important here is that saving your mother is the macguffin that takes you through 5 different locations, each with 5 different stages. Each location takes place at a different stage of your journey; fighting aliens on Earth, on their mothership, their home planet and so on.

That’s about it, but the combined skills of killing and cleaning that Really has learnt through his profession are of great use to him here. Killing aliens obviously helps with the alien killing and the cleaning earns you bonuses in a few different ways. There are further mechanic implications of each action you take on with the cleaning which are funny the first time you see them then necessary to master every time after that. 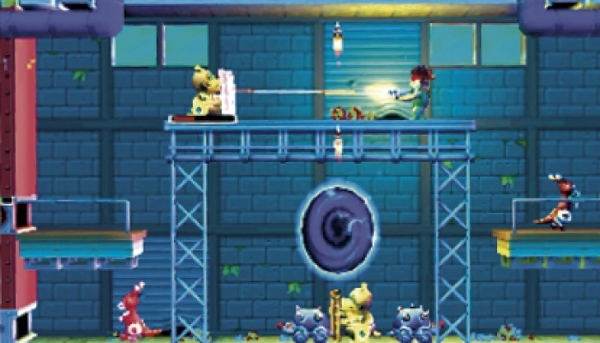 This game is perfectly priced for what it offers. You’ll certainly play through it more than once as you wouldn’t really want to touch this game if scores meant nothing to you. I can see some people rage quitting at about the half way point because it can be quite hard. Mastering this game would take another level of patience again. Not that these are bad things, I love hard games as the pay off is all the more glorious. Really, if you’re going to actually play a game rather than look at pretty visuals and absorb a cool story it had best be as hard as hell.

The mechanic is pretty basic, you’ve got an 8 point axis to shoot from in one of two modes; either moving or aiming, both of which need to be used to survive Enemies will attack you in waves which can overlap if you aren’t fast enough. Maps are 2D in structure and animated in 3D. Maps take familiar forms in most levels with enemies usually entering from wormholes at each corner plus a few random places as well. The core difference between each level is whether they’re small and cluttered or large and sparce. Usually the later will require basic platforming to get the best upgrades, like using the LMG kickback to push you up to a corner you couldn’t reach by jumping. 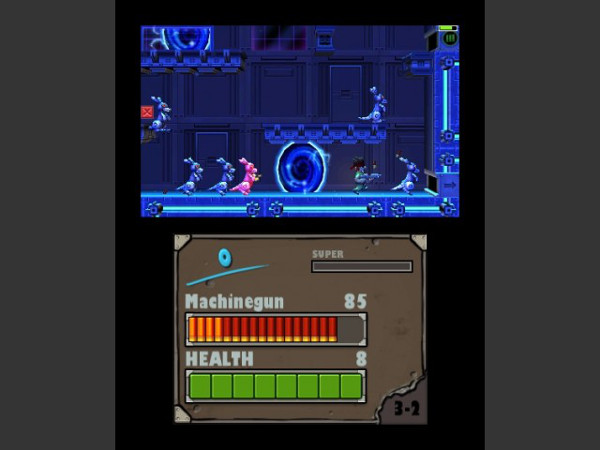 Each level usually has 2 or three weapon upgrades with one of them being a red herring, completely unsuited to the type of enemy you’re fighting. Weapon upgrades can be gained by sweeping shell casings and busted alien robots into bins marked with the type of upgrade they contain on the front. Perhaps not exactly bins, but boxes. Although if they’re not bins, then why is Really sweeping rubbish into them? The other type of upgrade you can get is an area clearing discharge which is built up by cleaning walls. In particular you have to clean the burnt remains of the aliens you just blew up off the walls. This takes time however, and should be planned around accordingly.

The challenge modes are a nice, if uninspired extra. Not to say they’re lame – it’s used effectively as another channel to explore the main game mechanic and that’s it. About a third of them are basically bonus levels but there are some timed target practice levels and survival modes. I didn’t get the chance to test the Street Pass leader boards as the game is relatively new but it appears to impact anything you can get a score on so if you’re competitive you’ll get a lot out of this addition. 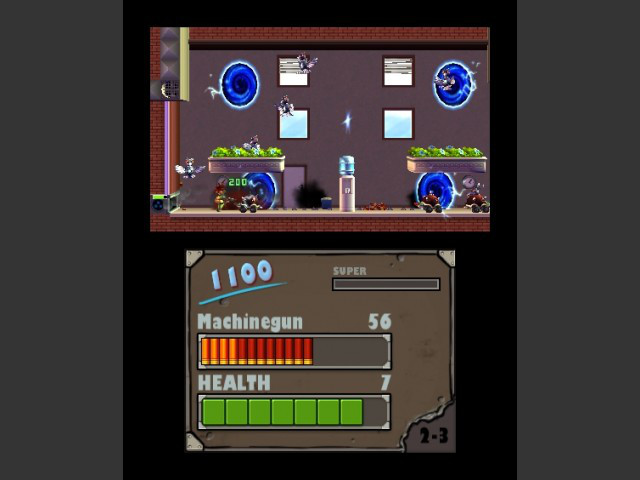 I played this game on full 3D, partial 3D and 2D. There isn’t any real reason to play this with the 3D all the way up, even if you like the effect. Nothing really takes advantage of the 3D except when every now and again an  explosion will throw something straight at the screen. Is anyone surprised at this any more? I think more people would be surprised that were still having this conversation. In addition, having the 3D turned on for a game that relies on twitch reflexes means you’re going to have a lot of blur when the screen misaligns with your face during the fury.

The art style itself if brutally functional. It doesn’t look pretty but it does get the job done. I wish more you’re character looks like Rambo and the bad guys are robotic animals. We all know what’s going on here and who is meant to be shooting who. Robot animals have had what’s coming to them since the Sonic days. While it may sound like I’m being down on this game for making the easy aesthetic choices that’s not true. Alien Chaos’ strength is in its tight mechanic and if there were any crazy flourishes here it would totally distract from what you’re meant to be doing.

Good boss music can make or break a game and for Alien Chaos 3D, it makes it. Due to the difficulty being the way it is, you’ll hear the songs a fair few times. Fitting perfectly with the pace and the tension, the music works like an informal game mechanic, setting your mind to work at the same rapid rate the game play wants you to be slaughtering at. Shooters and heavy metal are a match made in heaven and with a slight glam touch the tone matches the campy nature of the story Alien Chaos is offering. 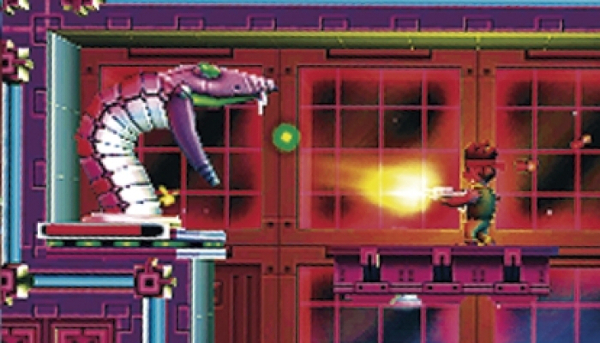 I was surprised by this game. With such an uninspired title and corny aesthetic I was expecting a slapped together money grab aimed at the younger market. Yet with the tight mechanic on offer here and the default difficulty this game forces a nice blend of twitch shooting and strategy. There is little here I didn’t like. Some stuff wasn’t as amazing you could imagine it, like the art or the use of 3D however it’s surprising how fast you can forget about that stuff when you have something that makes you want to play it over and over. Maybe I was hooked on high scores and medals, maybe I just couldn’t stand being beaten by a computer but hooked I was none the less. This game is perfect for bus stops, waiting for stuff to load or even in longer slabs just make sure you have something soft to throw your 3DS at when you rage at it for whooping your arse.