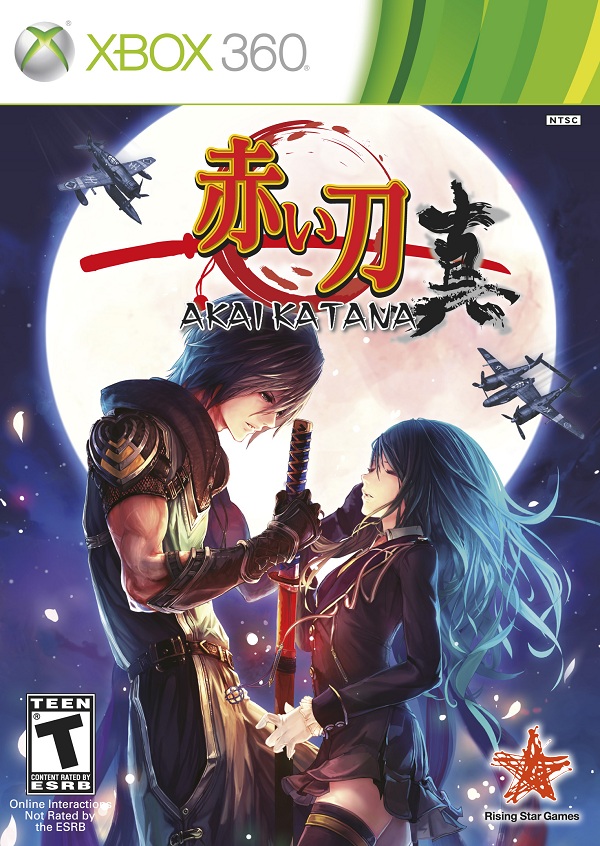 Overview:
In different regions around the world, certain genres can either be loved or mostly forgotten. For example, while hardcore FPS games are quite popular in North America and much of the rest of the world and companies have flocked to bringing as many of these games to the public, creating a flood of occasionally generic titles with little to no replay value.

On the other hand, a genre which unfortunately hasn’t been shown much love in Western countries, but is thriving in Japan, is the shoot’em up genre, also known as shmups or bullet-hell games. We’ve seen a scant few titles brought over to Western audiences in the form of Deathsmiles and even Otomedius Excellent, but now that Rising Star Games has settled into North America we now have another bullet-hell title gracing our shores in the form of Akai Katana. Does this unique looking bullet-hell styled game provide everything fans of the genre are looking for?

Story:
Now the actual storyline for this game is set in an alternate universe which is similar to Japan in the early 1900’s where people have found these mysterious and powerful Blood Swords (Akai Katanas). These blood swords require a human sacrifice to reach their full power and a powerful nation has risen out of the blood of their fellow soldiers. A few soldiers (the three playable characters) have chosen to rebel against this practice and put an end to this nation’s power once and for all. 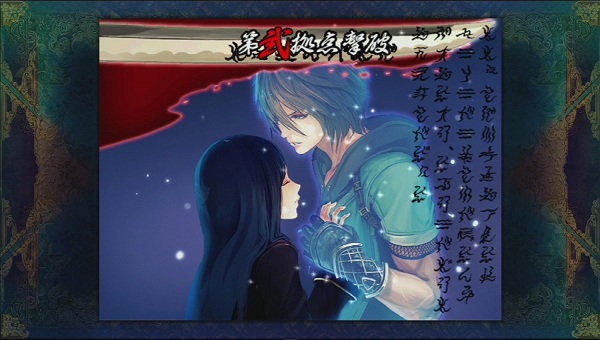 Interestingly enough, Akai Katana actually contains some sort of storyline, though barely any actual attention is paid to the story and with the English translation of the game being so bare-bones (more discussion on this later) barely any actual storyline is presented to the player, so those looking to understand what is actually happening in the game will probably be left out in the cold except for a very brief ending dialogue as the story itself is almost never mentioned in-game.

Visuals:
Rather than try to conform to modern day 3D models, CAVE has chosen to stick with sprite based designs and hand drawn artwork for the game, which is quite a bonus.  Based on the game’s setting of early 1900’s Japan and the rise of industrialization, most of the zones players will fly through have an appropriate, albeit bland, industrial feel to them. The enemies are varied well-enough with some surprisingly detailed mid-boss enemies appearing every level.

Where Akai Katana truly shines is when players are presented either the hand-drawn artwork of the characters, though it is unfortunate that most of these pieces of art are only briefly shown. Now one of the biggest questions about a bullet-hell game, is how does it perform when there are hundreds of projectiles flying around the screen? Well my friends, there is no cause for concern with Akai Katana as the title never experienced any slow-down despite the massive amount of colors, explosions, projectiles, points, orbs and more flying around the screen at any given time.

Audio:
As one would expect, Akai Katana features some lovely Japanese-styled music with plenty of songs to accompany the fast paced action that is happening on screen, with music changes during difficult boss encounters. Fighting against enemies and destroying them in large droves is satisfying thanks to some decent sounding destruction but nothing too disturbing as to take away from the game’s wonderful background music. 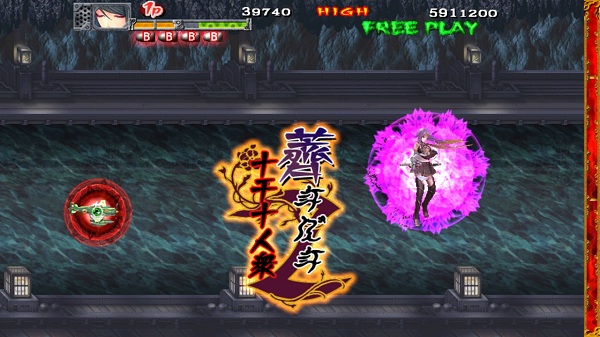 When Rising Star Games brought this title to North America they chose to leave the Japanese voice track unchanged which is for the best, but unfortunately the company chose to provide barely any actual subtitles for the game itself, with only an English translated menu system and some very minor English translation for ending scenes. No actual in-game dialogue is given the slightest translation, which is disappointing as the already bare-bones story is made even more non-existent due to this.

Gameplay:
At its very core, Akai Katana is a bullet hell shooter with hundreds of bullets flying around the screen at any given time . As they do this they will need to take down enemies using rapid fire attacks, smaller but more direct attacks and even bombs to clear the screen. The player will have a limited amount of health and lives and will receive damage whenever an enemy projectile hits their tiny green hit-box which is clearly displayed. Now with these limited lives, the player must make it through each stage without continuing in an effort to retain their high score.

Now while Akai Katana can actually be completed in under a half hour on a simple-playthrough and can even be completed by newcomers as there are an unlimited amount of continues provided for the story mode of the game, meaning that inexperienced players can still enjoy the experience and try to get better at taking out their enemies quickly while weaving in and out of the intricately patterned projectiles. 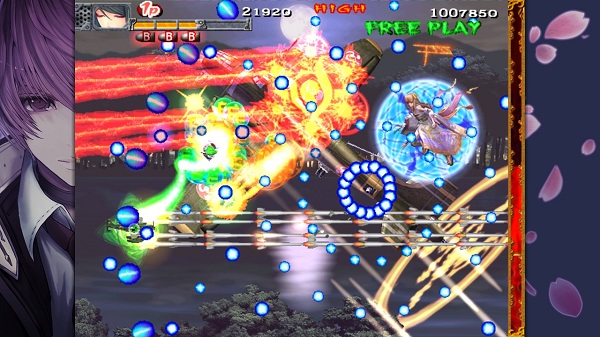 Despite the fact that it is quite short, the game’s true strength relies on the player’s tenacity to try and be the best by getting the best score possible. The challenge to be the best is even further increased by the fact that there are now two modes of play to choose form, a Slash mode and an arcade mode (as well as an upgraded Climax mode for console release). Now in Arcade mode players will need to acquire energy from destroying enemies to summon their Phantom, which can then allow you to acquire golden items which provide the most points to increase your score.

The Phantom form is extremely valuable and nigh-essential for surviving some battles, as players will be actually immune to enemy attacks as long as they aren’t firing while in Phantom form. Instead enemy attacks will bounce off as you maneuver for the best positions to take shots from.  Ultimately, Akai Katana is very unforgiving to those who don’t know the game’s mechanics, and even the training area is hidden, though Rising Star has actually provided useful tutorial videos which should be watched here.

Outside of Arcade and Climax mode there is another gameplay type called Slash which ups the ante by giving the player new ways to attack. Outside of Phantom mode players can accrue steel orbs which will circle around their ship until they enter Phantom mode. In Phantom mode these orbs can be fired off to deal out heavy damage to enemies on-screen, which is especially useful for quickly defeating mini-bosses and weakening the powerful end-level bosses. 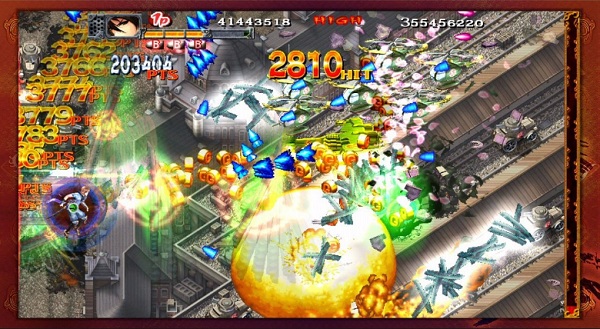 The bosses players face off against at the end of each stage deserve special mention not only for the insane amount of maneuvering that players will need to do simply to survive, but also due to how strangely insane these experiences can be. Initially the player can be firing upon the enemy already in Phantom mode until a giant warship appears out of a vortex in the air, bringing even more projectiles onto the screen in what can only be described as a colorful rain of death.

Overall:
Akai Katana delivers everything a fan of shoot’em ups or bullet-hell games could ask for. It has a few gameplay modes to choose from and master and players can set punishing challenges for themselves as they try to rank on the leaderboards. Interestingly enough the game even provides replays of stages which can be useful for those who want to train to be the best Akai Katana player possible. The game may be a bit faulty in some areas, such as its non-existent storyline and barebone translation but also provides the same hectic action and polished gameplay mechanics that CAVE is known for. All in all, Rising Star Games has picked a hell of a title for their inaugural release in North America and it is one that shouldn’t be missed by any fan of the genre, or even some of you who have always been curious about it.