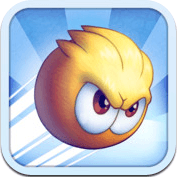 Overview
Platformers and ‘endless mode’ games are probably the most popular games being developed and sold on the App Store.  The success of games like Jetpack Joyride and Doodle Jump have spurred many developers to create similar experiences, hoping to snag a piece of that lucrative pie.  Into this crowded market leaps Air Jump. Air Jump’s goal is to be a game that taps into the ” synergy between good old Platformers and role-playing games.”  Does it succeed in doing so? 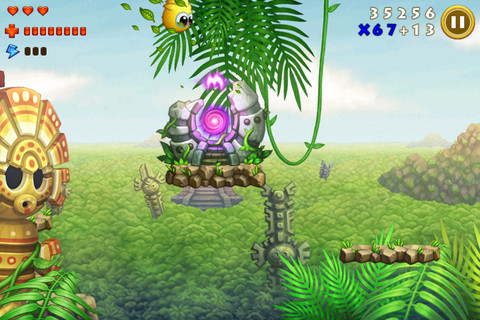 Gameplay
As a little round ball of fluff (with a super cool haircut), it is your destiny to traverse a dangerous world and seek out the highest score possible. To achieve the highest score possible, you’ll need to jump from platform to platform, avoid scary holes in the ground and kill bad guys who wish to harm you. Air Jump offers shortcuts too.  For example, all the platforms are colored differently.  If you only jump on matching colors, the combo multiplier will go up faster. If you hit the wrong colored platform, the combo will be lost, although the points gained previously will still count. Killing enemies by jumping on them will also add to the combo multiplier, as will collecting certain items scattered throughout the world. Air Jump has several unique features, but one of the most important is the Air Jump. At the top left of the screen there is an energy meter. You can expend this meter by tapping the screen. This allows the character to jump, even when there is no platform beneath him, thus explaining the meaning of Air Jump. This adds quite a bit of risk/reward options and is a very novel twist to the standard Mario-esque platformer genre. 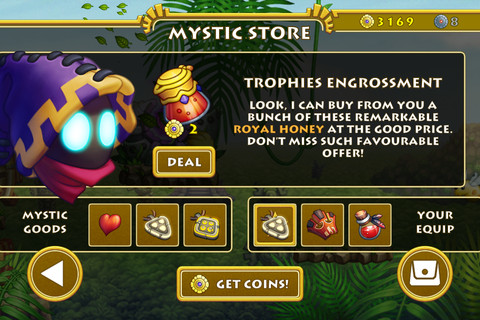 As you pass certain landmarks in the game, called Totems, you will have the opportunity to level up your character. Buying items will allow you to gain more health, deal more damage, receive energy faster, etc.  Although Air Jump is not the deepest RPG ever, it is interesting to see the level-up concept applied to this type of platforming game. One annoyance I had with the RPG system is that not all the items were very accurately described and  grammatically incorrect language was used. This awful syntax actually was littered throughout the game, but I found it most annoying when I was pondering over which items to buy, and I had no idea what some of them would do when activated. That said, I appreciated that the developer included extensive tutorials, explanations of powerups and other helpful hints in a special Almanac, accessed through the main menu. Another irritation I had in the game was that there were no checkpoints. If you passed thorugh 3 Totems, but failed before reaching the fourth, you were sent back to the main menu, forced to start again and work your way back up to where you left off. Although I realize that many games, like Jetpack Joyride, force you to do this, I found it increasingly annoying in Air Jump and not nearly as well an executed idea. 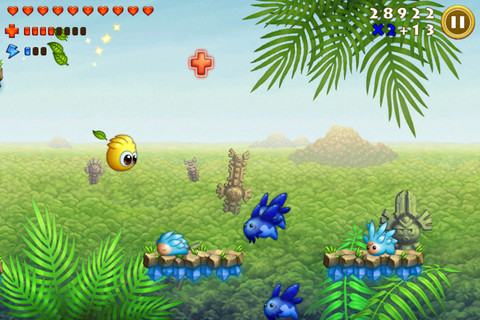 Audio and Visuals
The soundtrack in Air Jump is very catchy, and I found myself humming along quite a few times. Sound effects, for the most part, are quite good. However, whenever the character would perform the Air Jump, he would emit an odd, displeasing sound. I can’t quite describe it, but it was bothersome. Luckily, it is not very loud, and I was able to distract myself from it by listening to the soundtrack of the game instead. One major problem I had with Air Jump is that there is a lack of variety in the environments. All the backgrounds only had slightly different artwork and most of it felt recycled. This is a real shame, as most of the other graphics present are quite pleasing. Character models are funny and interesting, as are enemy types. Nonetheless, it can be quite boring to pass a Totem and realize you are still jumping around in the same stinkin’ forest. 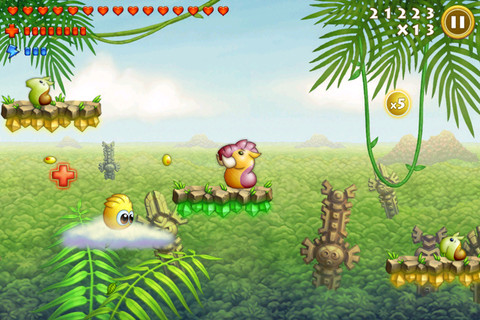 Overall
In conclusion, I was very impressed by Air Jump. I liked that the developer strove to fuse different genres together, and I really valued being able to jump around in mid-air. That added a lot of strategy and puzzle elements to the game. For an iOS game, especially a platformer, the game controls very well.  Nevertheless, I was very disturbed by the boring backgrounds and lack of checkpoints.  It was always so disheartening to be kicked to the main menu and told to try again.  If  the game would have created checkpoints at each Totem, Air Jump would be substantially improved.   All in all though, Air Jump is an engrossing, very addictive title that is deserving of your $0.99.