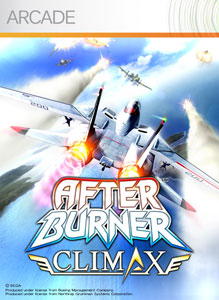 Overview:
If you have ever been in an arcade you may have seen an After Burner arcade cabinet set up somewhere. If you’ve been in one recently you may even have seen After Burner Climax in an extremely complicated and fancy set up. Now though you no longer need the arcade, as it is in your own personal console. Pilot your jet to take on countless enemies with enough ammunition to make the world burn.

Story:
Unfortunately the story is never truly explained for the game, though there is a small cutscene in the beginning which tells you what is happening as your jet is scrambled for takeoff. The story is just the setting of the game however and does not play any part at all. The story is if anything the weakest since there practically is none besides a terrorist with nuclear weapons.

The game is broken up into thirteen stages that each last about thirty to fifty seconds each. Occasionally one will contain a special objective during the stage that should be completed. They are not necessary but will help you advance to secret stages and to a special ending. 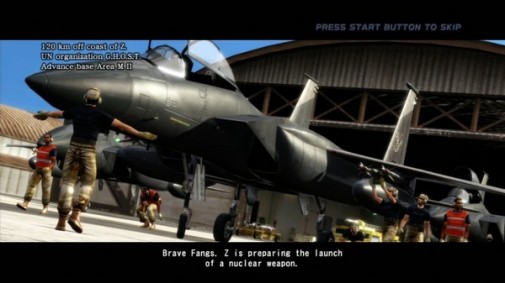 Unfortunately the game can be completed in under 6 minutes if your plane is at full thrust the entire time, 10 minutes normally. This can lead to many quick playthroughs and may leave some people wanting more.

Graphics & Design:
The graphics are a definite high point in this arcade game. After Burner Climax places you within an extremely large variety of environments which are crisp and bright. Some are designed to be completely wide open allowing any type of maneuver imaginable, while others will force the ship into precise movements or otherwise be plastered along the cliff face.

Each level has its own feel of vastness as the jet zips by at a few hundred miles an hour, deserts stir up dust as you fly over them, cities shine below in the night, and the water of the ocean keeps yourself amazed as you battle countless other planes.

The three jets in which you fly, the F/A-18E Super Hornet, F-15E Strike Eagle, and the F-14D Super Tomacat, come with four different paint variations and each one is unique, barring the low visibility paint which looks the same no matter which ship you use. Enemy ships are always visible and range from tiny stealth fighters to gigantic bombers. 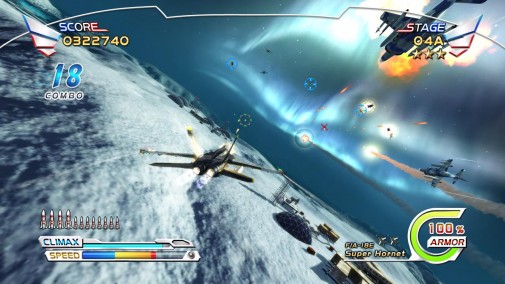 The levels are masked with clouds during the brief loading time between areas, and sometimes is blended so well that you will think that barely anything has happened. Smoke billows out of the backs of missiles and damaged ships. Quite honestly the game is picturesque in appearance.

As far as complicated gameplay goes, this game is not complicated in the slightest. First of all the game is set up in a complete linear rail. The camera follows behind your jet always and goes insane when doing a barrel roll, there are branching paths that you can choose to follow, however these never change and always consist of the same situation.

Now to the fun part, your weaponry. You only have two weapons at your disposal, a machine gun and missiles, lots and lots of missiles. The machine gun is the standard weapon of your arsenal and your primary source of attack. The targeting reticle is quite small and as you “paint” the targets they will start to be hit with your machine gun fire. The machine guns are not strong and the sound for them is very soft, you will barely hear them over the rest of the game.

When they are “painted” with the reticle, they are also locked on with your missiles. Machine guns may be the primary weapon, but they are far from the best weapon. Missiles target and destroy any enemy that is locked on, and you have literally an endless supply of missiles. While you shoot them your missile bay slowly empties, however as you continue flying your missiles restock continuously. They are a bit overpowered to be honest, but they help balance out the games weak machine guns. 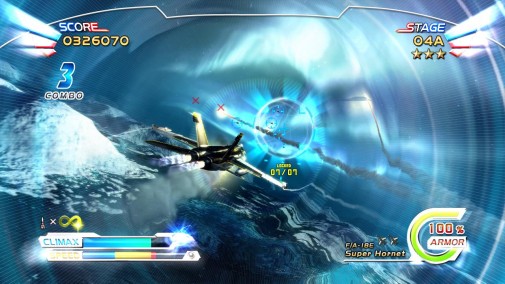 Now, unique to After Burner Climax, there is the Climax mode, which slows down time, provides you with infinite missile shots, and increases the reticle size by 10x. This provides some excellent timed assaults upon a whole screenful of enemies. The targeting itself is sometimes hard to control and the bar in which Climax mode is controlled fills overtime.

The plane flies like a dream, you have your standard flight controls where everything is inversed though this can be changed. Plus by moving the plane quickly from one side to another can cause it to do a barrel roll and avoid dangerous missiles that may have hit it otherwise.

There are two modes that you can play, you have your standard time attack mode which you have infinite amount of lives and the game is set up in the same manner as the original arcade game. Once you reach the end of the game your score is uploaded to the leader boards simple as that. There are medals that are awarded for playing this mode, but they have no real meaning other than an avatar award when you obtain every medal.

Then there is Arcade mode, which provides you the true arcade experience. Beginning with three lives and three credits you take off in hopes of saving your nation from nuclear threat. This is all good and all but sometimes you may find yourself overwhelmed early on and fall victim to the onslaught of enemies. 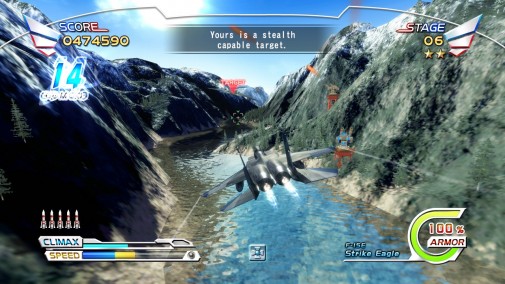 This is easily remedied however, as there are special Ex options which are unlocked throughout gameplay. These options increase the enjoyment of the game immensely. They may be looked down upon by the hardcore players, but for those looking for a fun time these are definitely the best thing in the game. There are options for unlimited Climax bar, unlimited missiles, more credits and more lives. There is even a god mode type option which can be unlocked with enough conditions met. These conditions are nothing horrendous and are shown immediately when looking through the ex options.

After Burner Climax is pure fun, no matter how you look at it the game is great. The fast paced shooting and dodging keeps the adrenaline flowing. Though the game is not without it’s faults. Due to the fact that it is a port of the Arcade version of the game, it is quite short and offers very little course changing which changes the gameplay little. Some people may find the game lacking in terms of replayability due to this fact.

I give After Burner Climax for the XBLA