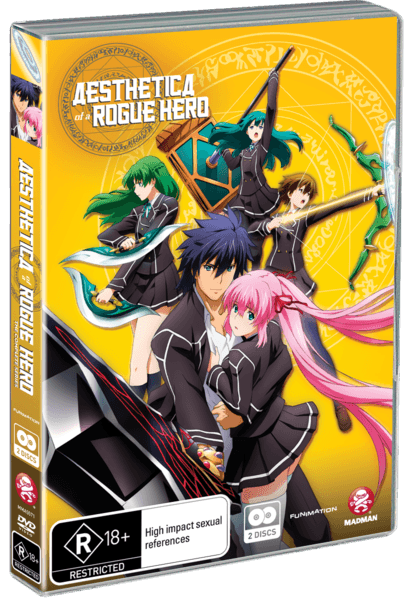 Overview
Everybody knows how it works in the world of fantasy. A Dark Lord  overtakes the world, throwing all into chaos. But wait, there is one willing to stay the course, one who will risk it all to save the world. That’s great and all, but what happens when the villain is slain? When the youthful champion is done fighting for the greater cause, there is only one place for him to go: School. 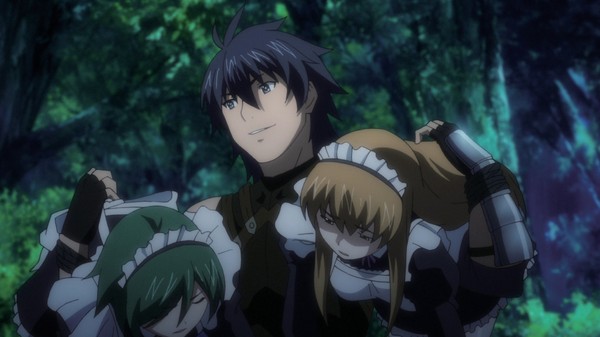 Story
Some time in the not too distant past, the world was thrown for a loop when a portal to another world suddenly swallowed up a fair percentage of the populace. As those stolen away slowly found their way back home, it was soon discovered that they brought with them magical abilities. This naturally led to a shift in society and Babel was created. As a way to organise those who were now more than your average human, the system protects and nurtures their talents until they come of age and enter the world. Though their choices of employment are arguably limited.

But enough on the world at large, let’s focus the story at hand. Akatsuki Ousawa: Rogue Hero of Alayzard and overall scoundrel. After slaying the Dark Lord Garius and ridding the world of a great evil, the hero made tracks for his home world. Though he brought a little something extra with him: the Dark Lord’s daughter. As was the will of Garius himself, the one who slayed him was to care for his daughter. A weird premise to be sure, though one Akatsuki accepts regardless. Now, before you go believing this to be a serious anime series…don’t. Although it most certainly has elements of a more traditional fantasy series, it also features an amount of fanservice that can only be called…copious. As in “there’s a whole episode centred on bra fitting” kind of copious…followed by a beach episode…where they play strip tag. Ok, maybe copious is an understatement. But don’t say I didn’t warn ya. 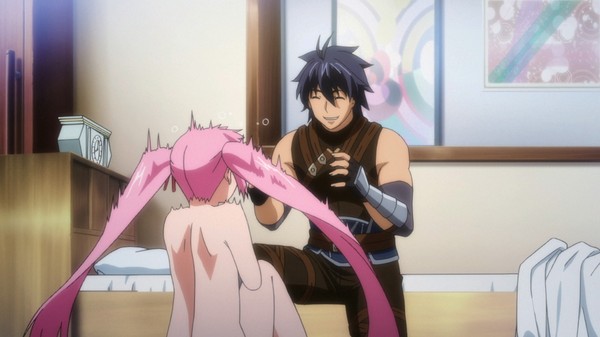 Anyway, when they’re not busy drawing the eye of people both fictional and non, the characters of Aesthetica actually attend school. Though the series doesn’t focus on the day to day of a magic education, we do get to see the highlight reel, which mostly boils down to fights. Monsters, bullies, each other, you name it, they fight it. Though this makes sense considering the nature of Babel, the series never really focuses on this to any major degree. If anything, each fight serves merely as a reminder that Akatsuki is unfeasibly powerful. Though despite this, and for the sake of conflict, he still has a few willing to challenge his methods.

By far the most interesting element of this series is the existence of two worlds, worlds that both sides are fully aware of. As main characters are not the only ones privy to such fantastical knowledge, Aesthetica presents socities that have bbeen greatly impacted as a whole…or so they tell us. Unfortunately the series does not venture too far beyond the walls of Babel. Though the school is the main source of plot in this series, there is a much  larger world that is never truly explored. It’s honestly a shame because both this world and Aayzard

However with all this being said, the characters of Aesthetica are remarkably self aware. Amidst all the perversion and bravado, Akatsuki is incredibly compassionate towards Miu and all of his friends, hell even his enemies can’t help but respect the guy. Though the anime tends to skew towards his more jocular side, his bursts of depth are certainly high points in the series. Miu herself is also painfully aware of her situation, secretly struggling with the burden of her existence. But again, the series leans towards her awkwardness around Akatsuki more often than not. 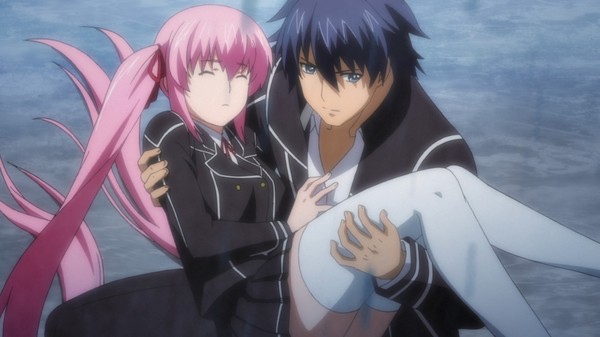 Even Rogues save the damsel in distress

Visuals
Due to its inherent nature as a fantasy series, Aesthetica features some degree of focus on visual variation. Naturally most of this is awarded to the more magical elements of the series, those these admittedly do follow some type of pattern. Spells are immediately recognisable by the glowing sigils that signal them. The particle effect summoning of weapons is also a nice touch, though the reason why Akatsuki’s is such a unique colour and takes longer to materialise is never specifically explored, though this is assumedly just a side effect of his tremendous power.

However the series main visual aspect is something that it proudly wears: fanservice. With a cast populated mainly by women and this being an anime, situations tend to devolve into bouts of wardrobe malfunctions and unabashed groping. As mentioned previously, you’d best come into this series expecting fanservice…because boy are you going to get it. Hell the series netted an R18+ rating for it. 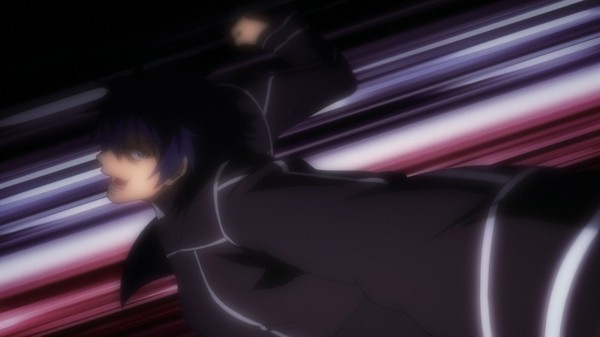 Dramatic build up, one of the benefits of being a Hero

Audio
Aesthetica itself features a solid dub cast that capture the essence of the characters well. Despite the mood shifting frequently from drama to comedy at the drop of a hat, the cast excels at capturing the necessary emotions in each scene. More mundane scenes are also bolstered by the rather colourful choice of phrase each character exhibits, such as dubbing a school bully “penis breath” or listing the Student Council as “the Jerkwad Brigade”. A voice filter used towards the end of the series also serves as another method through which the dub receives variation.

Akatsuki is also accompanied by what becomes a recognisable guitar riff each time he takes the stage and decides to play the big damn hero. Which happens quite a lot. Violins also frequently circle Miu, who is often lost in thought regarding pretty much every facet of her new life.

Extras
In addition to your typical promotional videos, trailer and textless intros and endings, this release also contains some neat little extras. Two episodes net themselves commentary tracks, with Alexis Tipton, Monica Rial and Felicia Angelle taking Episode 2, whilst Joel McDonald, Ryan Reynolds and Eric Vale speak over Episode 8. The DVD also comes with six additional original videos, that focus even further on the fanservice side of Aesthetica, with stories that are set throughout the series. 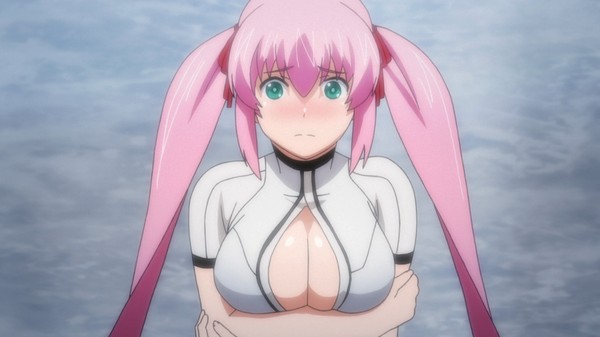 Overall
Aesthetica of a Rogue Hero is…interesting. Despite carrying all the hallmarks of an action packed fantasy anime, it is pulled away from this by its more comedic side. Moments of intense emotion are often immediately contrasted by some form of fanservice, which although not limiting the moments themselves, certainly removes any lasting sense of drama. That being said, the drama of the series is well thought out, with characters who exhibit a tremendous sense of self and understanding. Even a semi-recurring bully receives a believable and understandable development of character that kind of comes out of nowhere. It just serves to support the idea that amidst all of the topless shenanigans and shower scenes, Aesthetica does carry with it a true story. Though for an anime of such a short length, I feel that some episodes were wasted. A whole episode on finding Miu a bra? Seriously? The drama of Aleyzard could’ve received some more attention if it wasn’t for that. Which is a shame. In a series of  featuring two entire worlds, we are only privy to a small fraction of either. This occasionally has the untimely effect of putting us at a loss whilst characters know exactly what is happening. So all in all, Aesthetica is a series that is surprisingly deep for one that promotes its fanservice so openly. The moments of true emotion and drama will draw you in to the characters and the fanservice will bring it all back to face value. It’s a vicious cycle.