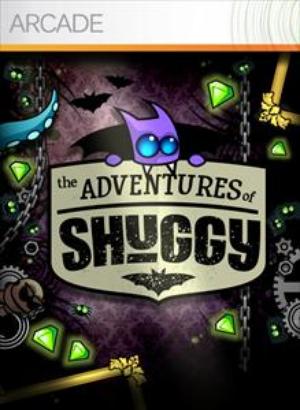 The Adventures of Shuggy

Download services like Xbox Live Arcade and the Apple App Store are great places to find some fantastic independent games, and it’s games like The Adventures of Shuggy that make you glad the smaller developers can get their products out amongst the big guys. It’s no secret that the most interesting ideas come out of indie devs, but strangely, all the clever ideas in Shuggy (and there are a lot of them) have been done somewhere else before. This sounds like a criticism, but honestly, the game should be praised for the way it combines so many fun ideas, uses them expertly and injects them with a unique personality. 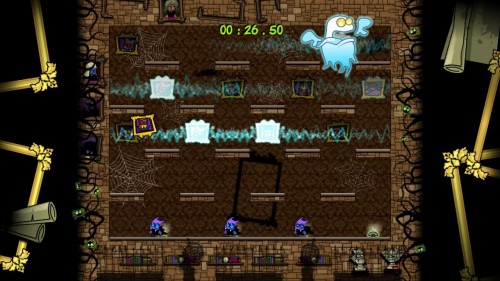 Shuggy is the kind of game that’s stronger without a story, providing just enough to contextualise the location and characters. Basically, Shuggy, a vampire bat thing, inherits an old castle and discovers on arrival that it’s haunted. He (or you, as the player) must move around the castle and clear out the nasties. The small story segments – pretty much just segues from one part of the castle to another – are presented as animated comic strips, which are fairly cool. Other than these small moments, the story is pretty irrelevant, but in this kind of game, that’s fine.

In each part of the castle – Dungeon, Boiler Room, Gallery, Graveyard and Clock Tower – players are given access to dozens of rooms, each one varying in difficulty and gameplay style: some involve old-school platforming, some are puzzles, some a combination. In each, players must gather the gems scattered around, but doing so involves a different core mechanic each time. In some, Shuggy can rotate the level around to access different areas. In others, there are multiple Shuggys, and the player must switch between them. Some require you to use a rope to swing to places you can’t reach. Some play with time or gravity. Some let Shuggy grow or shrink. In some, players must herd little creatures into cages to unlock gems. And some combine two or three of these mechanics in one level.

Not only that, but they begin experimenting within each of these gameplay types. In the rotating levels, for example, sometimes the gems fall downwards, meaning the player must rotate the level to have the gems fall through a maze and eventually within reach. In others, the gems stick to surfaces, and rotating the level allows new paths for the player to collect them. Sometimes the entire level rotates, others it rotates small squares of it. The player may be able to rotate on command, or may have to hit a switch to do it.

Then combine any of these with any of the other mechanics above, and their variations that I won’t go into, and you’ll have an idea of the scope of Shuggy’s creativity. 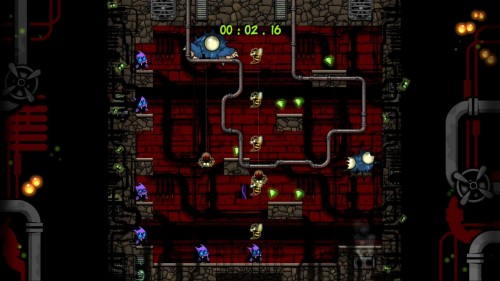 The point is, Shuggy has a ridiculous amount of different gameplay styles, which is both a blessing and a curse. The blessing, obviously, is that there is a lot to do, and most of it is great fun. There are over 100 levels, but considering how many mechanics they have to play with, it doesn’t feel like enough. There are so many ideas at play here that many seem under-explored. I guess that’s a positive reaction – too much material, yet I want more.

There are certain levels of Shuggy that can be likened to plenty of other games; the platforming is reminiscent of early Mario games (right down to the jump sound effect, which sounds exactly the same as Mario’s), swapping between multiple Shuggys to solve puzzles feels like the Super Nintendo classic The Lost Vikings, the time mechanics have been explored in a similar fashion in Braid and The Misadventures of P.B. Winterbottom. But Shuggy handles them differently, combines them in interesting ways, does things with the mechanics that the other games didn’t, and maintains its unique personality throughout.

If they hadn’t handled it so well, you might think they have attempted too much for one game. At times, it can get confusing, as you try to remember what you can actually do in a particular level. But the simplified control scheme helps a lot: the left stick controls movement (obviously), A is Jump and the right trigger activates whatever ability Shuggy has in that level. That’s it. There’s a lot of depth in gameplay, yet the control’s simplicity smooths the transition between each level. 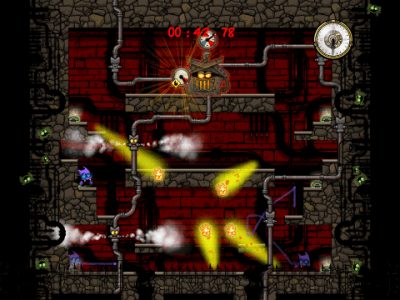 A potential problem could be in the developers’ future releases: Smudged Cat might have used up all their good ideas in one title, when they could have spaced them out across multiple games. Each of these mechanics could almost sustain an entire game themselves – at least a small downloadable title. We’ll have to see their next release to judge that, but with Shuggy, they’ve set the bar high for themselves.

Unfortunately, I didn’t get a chance to try the multiplayer modes (I only have one Xbox controller), but my understanding is that the mechanics are explored even further there. I will definitely play those modes later though.

Visually, Shuggy is a treat. The character himself is, dare I say, cute, but with a touch of creepiness. The design of the enemies are probably the weakest part of the whole package, with the standard spiders, wasps, zombies, robots, spikey ball things, mines, nothing particularly unique. Shuggy himself, and the other vampire characters, would be recognizable outside the context of the game, but the enemies don’t stand out at all.

Thankfully the boss characters have had more thought put into the visual design. They all fit the overall aesthetic and suit their function, and are a pleasure to battle, with inventive use of prior mechanics required to beat them.

The environmental design is also very well presented. Each section of the castle is distinct, introducing a new aesthetic, new enemies, obstacles, and gameplay elements. The only issue I had was in later levels, where elements of the environment would reach into the foreground, resulting in a few blind spots. I’m not sure if this was a deliberate attempt to make these levels harder, but if so, it’s a cheap method, and unnecessary, as the game’s difficulty increases at a nice pace without the interference from the background.

The music is fitting, with a somewhat jazzy soundtrack, although more variation would be appreciated. Each area has its own music, but with 20 or so levels each playing the same loop, it can become fairly annoying. 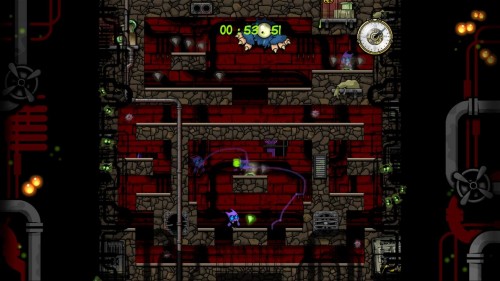 There are plenty of minor problems with The Adventures of Shuggy, but they are more than outweighed by the things it does right. It perfectly captures the old-school platforming feel, and balanced with inventive puzzles, it challenges in both respects in equal measure. Throw in a nice visual aesthetic, a hell of a lot of content, and the very generous $10 price point and there’s really no reason not to get it.

I give The Adventures of Shuggy: