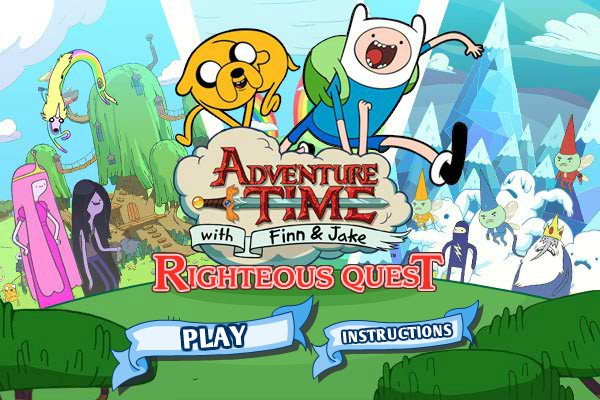 Overview:
Adventure Time is one of the more popular shows on Cartoon Network, having a wide following with young and old alike.  As with lots of kids shows, it follows the trend of having flash games available on its show’s website as a way of having more for users to do on the site.  So, how does the game stack up as a free online flash game? 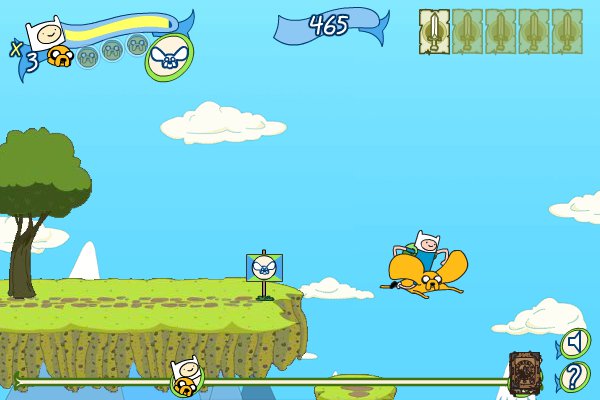 Story:
Adventure Time: Righteous Quest tells somewhat of a disjointed tale, which fans of the show might not be surprised at.  The Righteous Quest ranges form seeking out a book for the Princess Bubblegum, getting Finn’s keys back from Marceline, and defeating the Ice King because what would an adventure time game be without defeating him.  These aren’t unimpeded of course, so Finn and Jake have to fight past gnomes, ninjas, and snow monsters to be able to complete their quest. 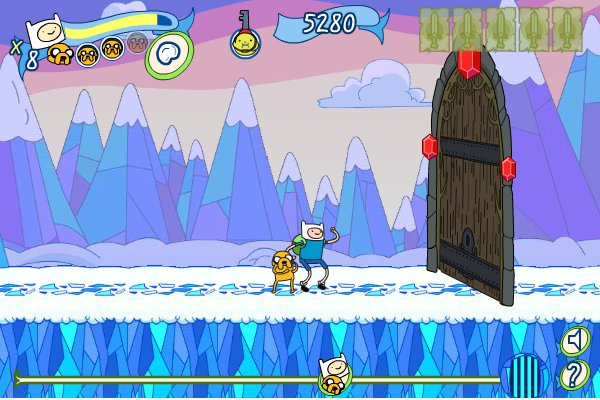 Gameplay:
The game plays like a regular platformer, but with Finn and Jake moving in tandem as one.  Finn is capable of throwing snowballs at enemies, where Jake supplies a variety of special moves ranging from flight, growing to surmount heights, and a super attack that destroys all the enemies on the screen.  There are plenty of things for the player to collect from gems, to sword cards, to the tokens that give Jake his super attack, most of which increase the score for players trying to perfect the game.  The game is fairly easy, so it shouldn’t be a problem for younger players to attempt, though sliding around on the ice may prove the most difficult. 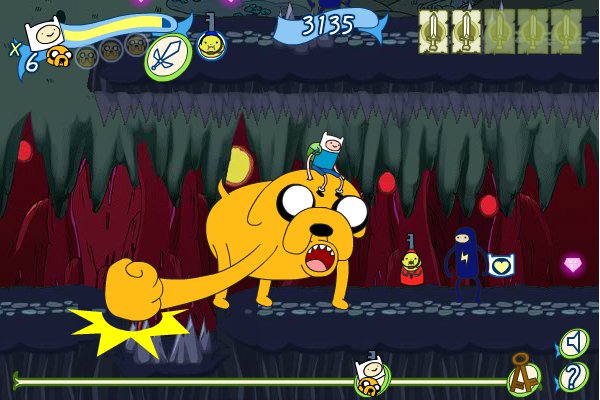 The platforming is fairly standard, but it is good that all the platforms are adequately spaced, so there are no doubts about what jumps can be made and there aren’t any issues with jumps that are at all iffy.  Some of Jake’s powers though can sometimes slow the games pace a bit and/or get in the way, as it uses the same button as Finn’s attack, so it will opt for the special move instead of attack.  Jake’s grow power is the main culprit as you have to watch the animation every time and feels like it could be a bit quicker, but luckily it is a short game.

Audio & Visual:
Adventure Time: Righteous Quest looks and sounds just like the show, with the voice acting and art style remaining consistent with what viewers would expect to see.  The music is a cheerful strummy tune, which can get old after a little while, as it is the same in each stage, but as stated before it is a short game.  The other audio seems to be mostly clips from the show that are simply used for the game and it is most of the generic sayings, so it’s not altogether out of place.  The visuals, while keeping within the art style, are simplistic, but fair for a flash game and there aren’t any apparent errors or problems from them either. 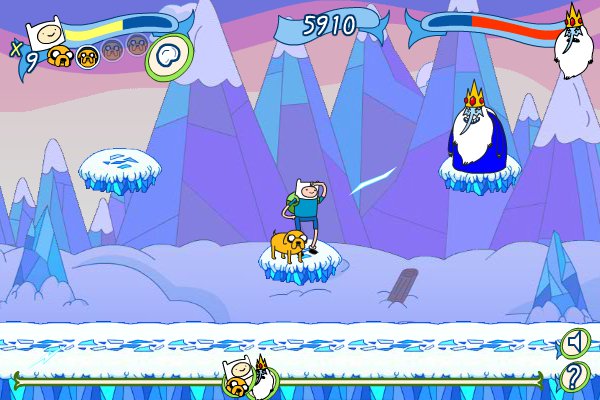 Overall:
For a free flash game, Adventure Time: Righteous Quest is a good time waster that fans of the show should enjoy.  It does have a scoring system, so players can certainly try and collect everything from the in-game gems to the outer game badges.  The few issues are more than offset by its shorter length and shouldn’t keep anyone from trying it out.  Lastly, it’s a pretty clean game too, so there isn’t real issue with what age should play it, simply being any age can play.  If you enjoy the show and have some time to kill online, consider giving it a shot since you can’t really go wrong with free.