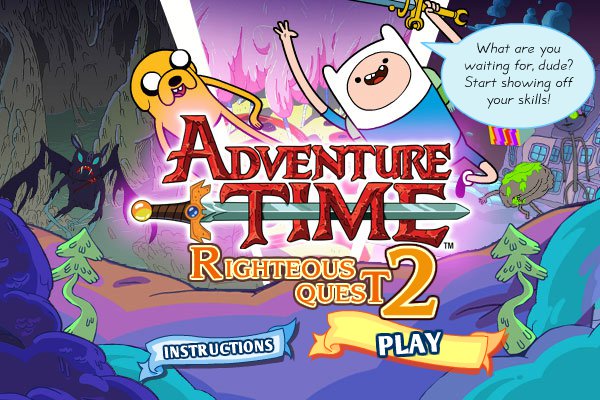 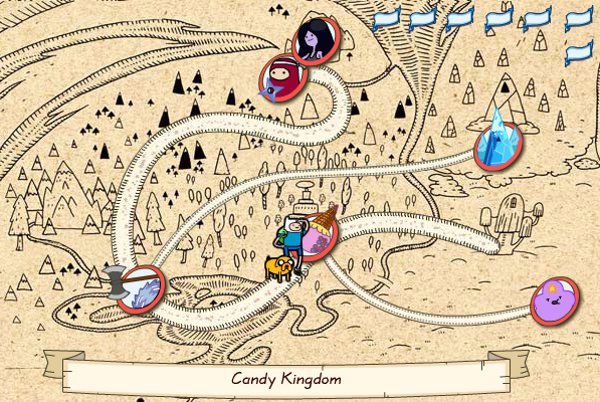 The first one was pretty decent for a flash game based off of a television property, but did it warrant a sequel and does the sequel warrant a view itself?  To find out just what this game holds in store for potential players, read on.

Story:
As stated before Adventure Time is filled with plenty of random quests that Finn and Jake have embarked on, which makes it pretty easy to build a game around it.  This time around though there are a lot more levels and a lot more material pulled from the show, though chopped up to fit in the confines of the games story.  Levels begin with a one-panel run-down of what’s going on to explain not only what’s going on, but what Finn and Jake are trying to accomplish. 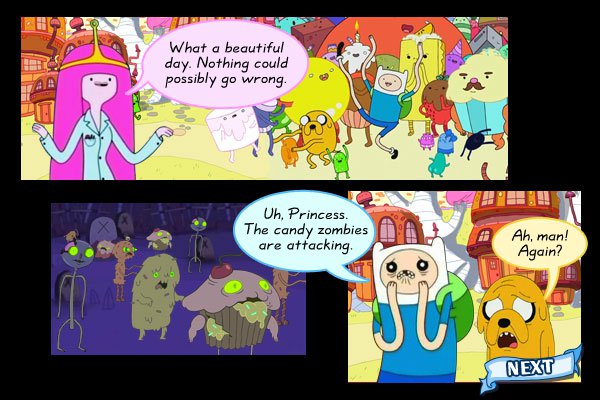 There are actually a total of 5 levels and a boss fight in the game, each level having really it’s own story and tie to the show with the boss fight related to the final actual level.  Because of this, there actually is a bit more story than in the first game, and surprisingly doesn’t have anything to do with the Ice King.  In total, the levels range from fighting Candy Zombies, saving the Hot Dog Princess, collecting Finn’s Power Rings, climb the highest peak in the Ice Kingdom, and retrieving Jake’s viola from Marceline, who is this game’s boss fight.  So more or less the usual day for these two and actually pretty interesting range to keep players more or less entertained.

Gameplay:
Even more surprisingly than not fighting the Ice King is the fact that the game doesn’t just copy/paste almost everything from the first game.  There are a lot more things to collect and even better a map to select which level the player wants to play as some areas are unobtainable in the first time through until Finn can collect some special abilities.  Completing specific tasks in levels can open side/secret levels for Finn gain upgrades such as a rusty sword to replace the snowballs and finally the ultimate wizard power to basically become invincible and destroy anything until it runs out and has to recharge.  These are very welcome changes and actually work a lot better than the system in the first game where you look for the same number and kinds of items in every level, so definitely better in that respect. 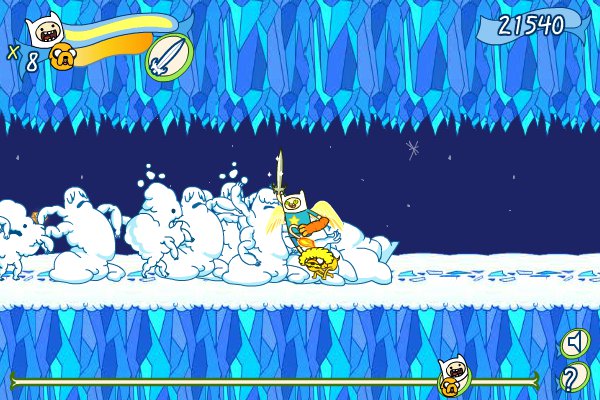 There is still a lot of platforming, Finn and Jake still have to go around levels finding things and unfortunately Jake doesn’t get anything new this time around, but in addition to the platforms to be traversed are portals that can take the two to different areas to collect more, without having to limit the full exploration to layers of floating platforms.  These actually open up exploration a lot more than just having to systematically collect everything from the top level and work down or vice versa.

Audio and Visuals:
Righteous Quest 2 kinda falls short on all things audio, but that can be pretty understandable in terms of space.  The music is the solid acoustic guitar one would would expect of an Adventure Time game, but it can get a little repetitive as the same songs are on different levels.  The game does also at least have voice clips from the show for when Finn and Jake do something special or simply progressing, but it’s really the same stuff that was in the first game.  So, there really isn’t any solid improvement like in other areas. 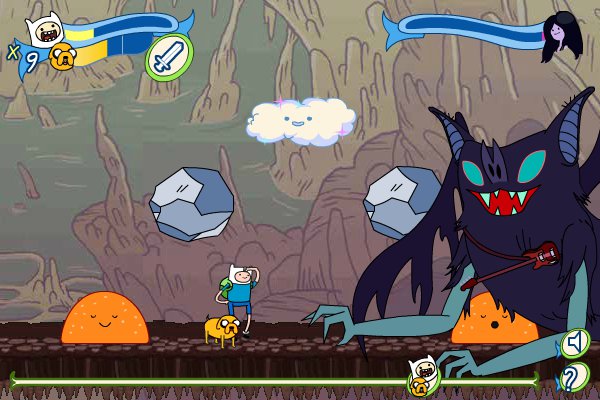 The visual style fits the show perfectly as everyone looks exactly as they do in the show and there is quite a bit of range in terms of level designs and enemy types.  There is a lot more variety in terms of enemies from those Candy Zombies, to some ninjas that Finn and Jake need to completely wipe out.  It’s great to see a wide spectrum to fit the gamut of areas that players can gain access too, instead of only reusing the ones from the last game.

Overall:
This is a big improvement that fans of the first game should definitely look into.  Fans of just the show should actually have some fun too as the gameplay isn’t nearly as lacking as it really could have been.  As sequels go, there is plenty more added and everything that was added works a lot better than the first time around.  I give Adventure Time: Righteous Quest 2