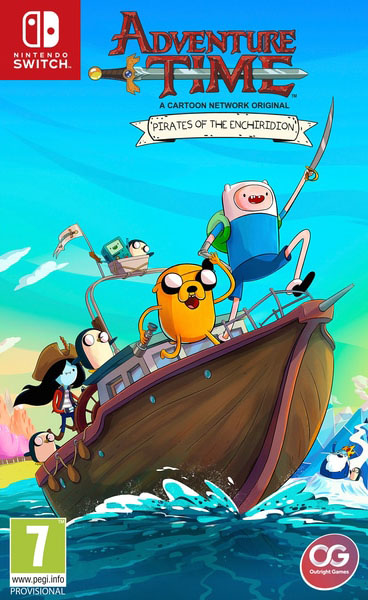 Adventure Time: Pirates of the Enchiridion

What time is it? Adventure Time! This time Finn and Jake take over the role of pirates and there is a reason for it. The Land of Ooo is underwater and it’s dangerous out there! Adventure Time: Pirates of the Enchiridion combines turn-based combat with exploration and puzzles and is now my personal favourite game of the licence! Why? Read on!

As mentioned there is something weird going on in Ooo. Ice King’s kingdom melted and nobody knows how this could happen. Finn and Jake use this opportunity to jump in a boat and set sails. On their adventure they travel to known locations from the series like the Fire Kingdom or the Evil Forest. Besides the investigation you’ll meet familiar characters on your journey, who provide you with a bunch of side quests. 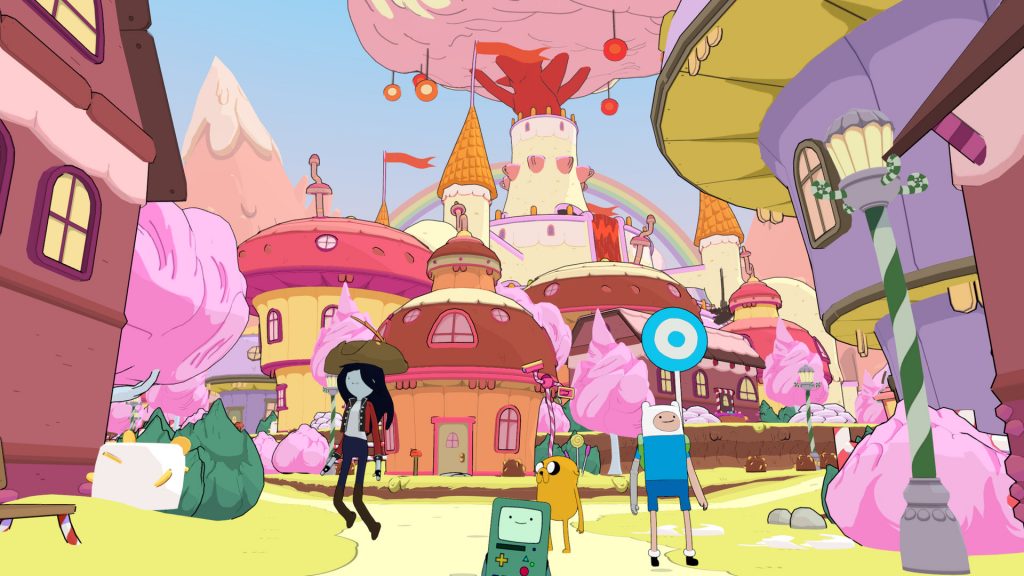 Our ship gives us the opportunity to explore Ooo totally free. Unfortunately this is not the whole truth, because as soon as we reach a new area where we leav the waters – we might need a special ability or character to move on. The exploration aspect of the game forces us to revisit certain zones several time and therefore also extends the length of a playthrough. It took me about 8 hours to finish the game including side quests and this seems a bit short looking at the potential. If Ooo wouldn’t be underwater – just imagine  the potential for an open-world adventure.

There is a certain charme though travelling the dangerous waters of Ooo with Finn, Jake, BMO and Marceline and the best part is the singing. While sitting in the ship and heading to our next destinations this game always reminded me of God of War. I’ve also spent most time sitting in a boat there and listening to hundreds of dialogues. In Adventure Time: Pirates of the Enchiridion the characters will lighten up the time until arrival with some great catchy songs. I absolutely loved this idea and it made this experience very special. 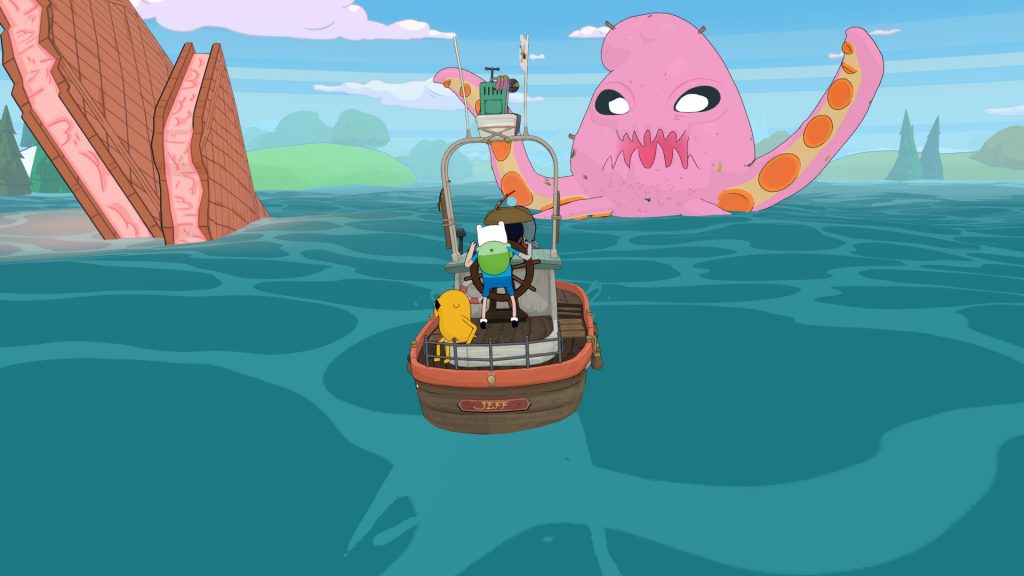 If we want to follow the main story, a marker will guide us the way. If we’re looking for a bit of exploration there’s the world map, but unfortunately we couldn’t spot a mini map. The worst part about this was that our pirate ship stops as soon as we take a look at the world map. Without a mini map it’s almost necessary to check from time to time if you are heading in the right direction, but it’s a real downer to always get your ship moving again. This problem could’ve been easily solved for a better gameplay experience.

Combat represents the biggest strength of Adventure Time: Pirates of the Enchiridion. The turn-based system gives you control over Finn, Jake, Marceline and BMO. Every character can use their unique abilities and charge up a meter for a special power. As Finn and Marceline mostly concentrate on dealing high damage, Jake takes the role of a tank while BMO keeps his friends alive as a healer. You can buy additional items from shops that will help you to recover your hit points, remove status effects or  give you other advantages in combat. A stink bomb for example can be used to cover one of your adventurers in dirt and enemies won’t attack him or her anymore. There’s a certain strategy needed in some encounters and especially while fighting bosses. With BMO’s ability to uncover the weaknesses from enemies, you’ll always find the time to think about your next best move though. 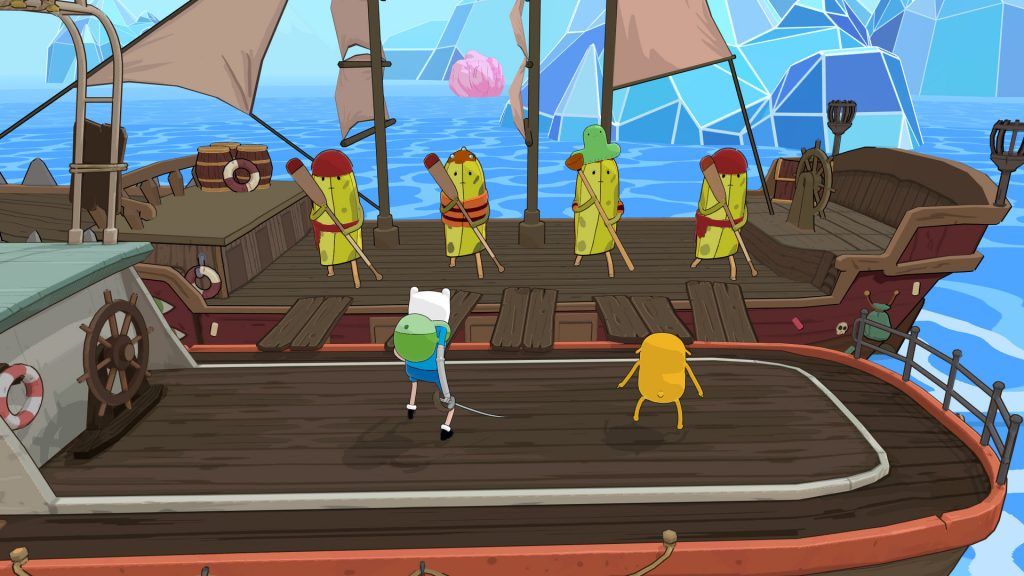 One thing that was surprising for me was the missing turn order during fights. You never know who’s attacking next and this gives you an element of surprise while also leads to unnecessary actions. Sometimes I used protection spells without use and for example with a turn order shown on the screen I could decide if instead of healing a dying party member I could finish off the enemy instead. The chosen system seems a bit strange because there are items and abilities that makes you slower and faster – so for me it makes a lot of sense to provide players with a turn order.

Another feature are interrogations. Finn and Jake are playing good cop bad cop and want to get information out of certain people that live in Ooo. You’ll always have to decide which approach might work best to convince the characters. The few puzzles in the game are pretty simple and are basically about moving objects from one position to another to reach collectibles. Finding these stuff rewards you with currency to spend in shops, items or new abilities for your characters.  Make sure to unlock and hunt for all treasures before you finish the game as there is no return and Adventure Time: Pirates of the Enchiridion is not giving any reason regarding replayability.

Graphics are great and the developers recreated the colorful world from Adventure Time with much love. Also the animations combined with the words from the original voice actors deliver an awesome experience for any fan of the series. Did I mention the singing already?

I came across some technical issues like a crash in the tutorial, a lot of invisible walls and some graphical issues but except the crash it didn’t really bother me a lot. Also I’ve never got stuck so I can accept these minor problems 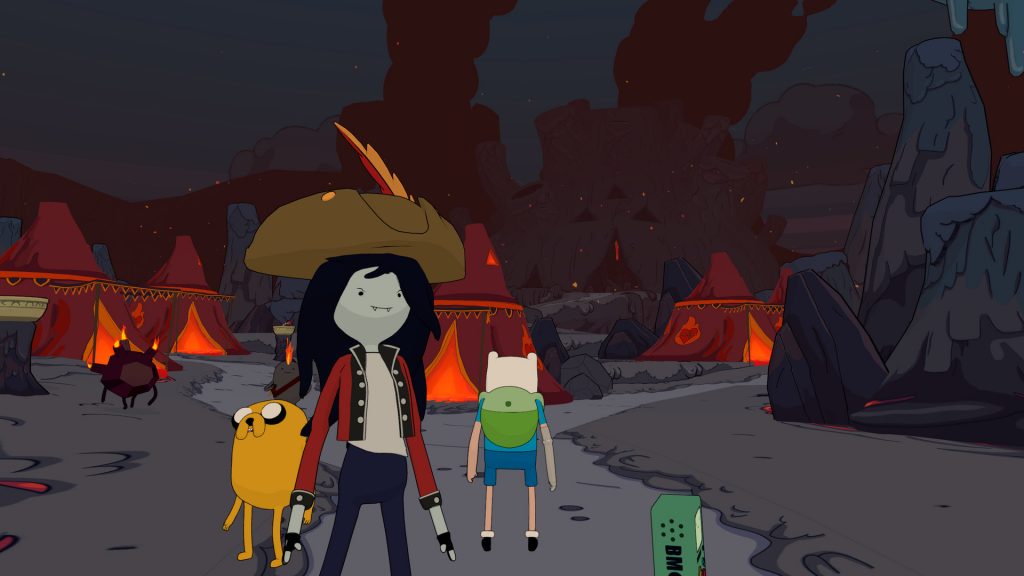 Adventure Time: Pirates of the Enchiridion is not flawless but delivers a great story and really represents the licence well. I had a permanent smile on the face while exploring the flooded Ooo and some jokes really made me laugh out loud! The game gives the impression of an overuse from too many mechanics and ideas, but I found this mix of several genres really refreshing. Fans should definitely pick this up!

Adventure Time: Pirates of the Enchiridion is easily my favourite game of the series for now. Yes, it's too short and has technical issues but from beginning to end I was highly entertained.
8