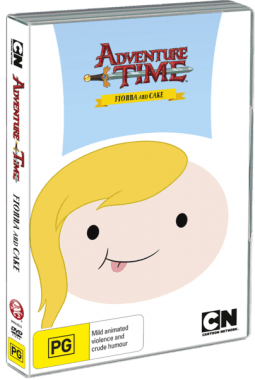 Adventure Time follows the story of Finn the Human and Jake the Dog, Finn’s best friend and adoptive brother, as they adventure through the Land of Ooo. Together the two best friends adventure far and wide, saving princesses and defeating evil kings. Adventure Time is set in a surreal, dreamlike world, where Finn is the only human among animals and many other non-human beings. Complete with outlandish humor and loveable characters, Adventure Time took Cartoon Network by storm. Making its way onto the internet, Adventure Time has become a world favorite. Part of the reason Adventure Time does so well is because it’s throws together things that no normal cartoon would, and explore themes that are original and different to most cartoons. This is what people want, originality.

Adventure Time Fionna and Cake features sixteen episodes, including a special feature Little Did You Know. The feature episode Fionna and Cake depicts a gender bending world, where Finn is a girl, voiced by Madeleine Martin, and Jake has become a cat, voiced by Roz Ryan. The entire casts’ gender has been switched. The other episodes share a wide range of adventures, and the special feature has pictures and character profiles of the main characters from the quirky American cartoon. 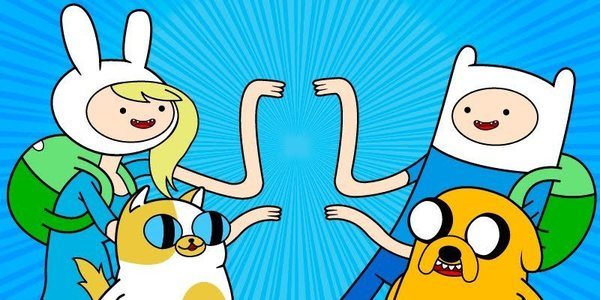 Adventure Time is an ideal show for airing worldwide. It dosen’t have a plot, so there is no real story, but that dosen’t matter.  Adventure Time isn’t a show that needs to have a continuing story line too keep its viewers interested and wanting to watch more.The strange and quirky adventures of the Finn and Jake keep the audience eager to watch more episodes. As the DVD features 16 episodes, there isn’t much point in me going into depth about each episode’s story. Instead, I’ll go into detail about the plot of Fionna and Cake and briefly touch over the synopsis of every other episode.

Fionna and Cake is an episode unlike any other. This episode features fairytale conventions such as shy love between a prince and a girl, singing and an evil witch. Instead of featuring Finn and Jake, the episode features Fionna and Cake, the gender-bender versions of the two lead characters. Set in a gender-bending universe, Fionna and Cake are helping Prince Gumball set up for his Bi-annual Gumball Ball when they are attacked by the Ice Queen.  Ice Queen is furious that Fionna keeps “ice blocking” her, and in her rage attacks Fionna, cake and Prince Gumball. Fionna saves Gumball, and in return, he asks her to join him in the castle gardens.
Cake is adamant that Gumball has asked Fionna out, but Fionna disagrees. After Cake pushes it, Fionna finally agrees to go, only to prove Cake wrong. After flirting back and forth and singing a soppy romance duet, Gumball eventually asks Fionna to his dance, as his girlfriend. After rushing home with the good news, Fionna and Cake get to work, putting together a last minute outfit that, as happens in all fairytale-style stories, looks stunning. Prince Gumball takes Fionna up to his room. Viewers can now begin to guess what’s going to happen next, but a twist ending changes everything, leaving the viewer thinking only one thing; what did I just watch? 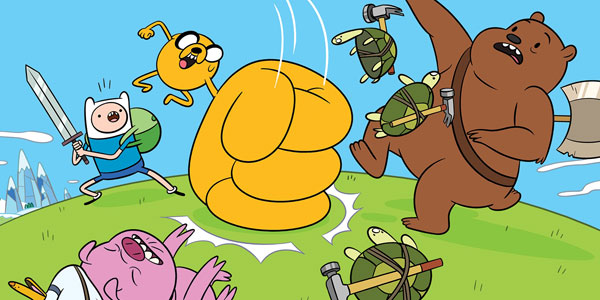 In Storytelling, Finn goes on adventuring through the woods in order to find a real-life story filled with romance, suspense, drama and fighting that he can tell Jake, who is sick in bed.

In a bid to help the Princess in The Other Tarts, Finn and Jake accept the dangerous task of delivering rare tarts to the Candy kingdom ceremony. After deciding to use trickery and deception to protect the precious tarts, Fin and Jake soon realize how hard it really is to keep the tarts safe.

After riding the Goblins of their spank-happy king in The Silent King, Jake takes over the kingdom, but soon realizes that their strange rules and odd ways are not something he wants to be a part of.

Princess Bubblegum has entrusted her precious plant to Finn and Jake. They must baby sit the plant. Death in Bloom sees Finn and Jake through the underworld as the Endeavour to rescue the plants soul from Death before Bubblegum returns from her meeting. 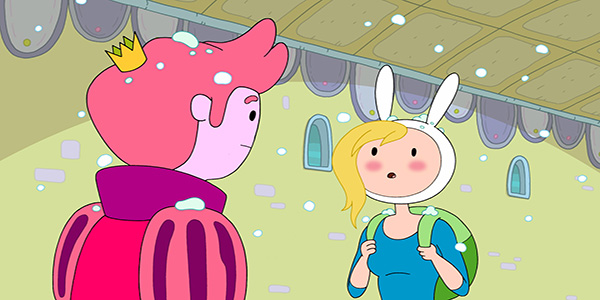 In the episode Still, the Ice King has stolen into the tree house and froze Finn and Jake so that they can bond. In order to escape the wacky bonding session and, Finn enters the astral and attempt to summon his astral beast.

Wizard Battle sees Finn and Jake battling wizards from around the Land of Ooo in a strictly Wizard-only contest. They defeat the other wizards, and come head to head with the Ice King. It is up to Finn and Jake to stop the Ice King from winning the ultimate prize; a kiss from the lovely Princess Bubblegum.

Finn, Jake, BMO, Bubblegum and Marceline must overcome their differences and play in a genuine band in order to open the Door Lord’s gate and retrieve their stolen items in the episode What Was Missing.

After another plague of Candy Zombies attack in From Bad to Worse, Princess Bubblegum has succumbed to the undead/ Finn, Jake and their friends must race against the clock in order to  find a way stop the plague from spreading, but things just get worse and worse by the minute. 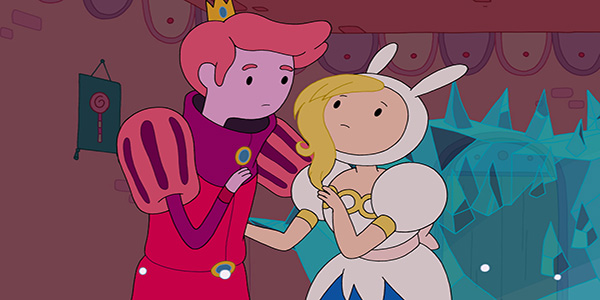 In Marceline’s Closet, Finn and Jake play cloud hunt in Marceline’s house, but become trapped in her closet after she returns home.

Finn is once again rejected by Bubblegum in Incendium, Jake searches for another girl for him and ends up in the Fire Kingdom, attempting to win its princess.

In Princess Cookie, Finn and Jake are called to solve a hostage situation after a rogue cookie has takes over the Candy Kingdom.

After annoying Princess Bubblegum’s people with his weird and disturbing ways in You Made Me, Bubblegum helps the Earl of Lemongrab to resolve his issue of being alone and misunderstood.

After a run in with the Ice King in Lady & Peebles, Finn and Jake disappear. Princess Bubblegum and Lady Rainicorn step up and search for the missing friends.

Adventure Time is no ordinary cartoon. Based in a surreal world inhabited by weird creatures with even weirder antics and behavioral patterns, it’s a cartoon unlike another, and it’s visuals fit right in. The character designs are really out there, with princesses made of gum, talking animals with glasses for eyes and kings made of ice.

Each character has their own distinguishing features and none of them look the same – even the Cuties are all designed differently. Each character, as weird and strangely shaped and colored as they are, fit in perfectly with the cartoon. These characters keep the viewers coming back. It’s easy to favorite characters from Adventure Time, especially when they look cute, adorable and downright awesome.

The bright colors easily attract the viewers, and the different colored characters easily catch the eye. There is no in depth coloring and texturing, it’s not needed. The solid colors keep the cartoon atmosphere. It’s bad enough that the logic attacks the viewers brain, if there were intricate textures, the cartoon would be too powerful, and would proceed to assault the eyes of the viewers.

The cutesy, awesome and outlandish designs are great, and fit in well with the cartoon itself. The simplicity of the visuals is what really makes Adventure Time great. The story lines for each of the separate episodes can get really complicated, so complex, intricate designs would probably overload the audience. 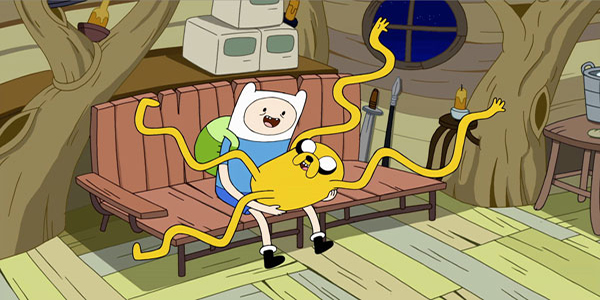 The audio, in the sense of fitting in, is the same as the visual aesthetics. It slots in perfectly because it’s always so quirky and outlandish.

To begin with, the theme song is a quick little tune played one a ukulele. Using a ukulele has given the theme song a different twist to it. Most cartoon theme songs feature more mainstream instruments like guitars and drums as opposed to a ukulele.

The dialogue is filled with random conversations and quirky, sometimes twisted, humor. The dialogue fits in well with the atmosphere of the cartoon, and the twisted jokes suit the characteristics of the characters.

The DVD features Little Did You Know, a special feature that has a biography of the characters, providing their name, species, age and explaining a bit about the characters and their role in Adventure Time. It’s a great way to get to know you favorite characters a little bit more. 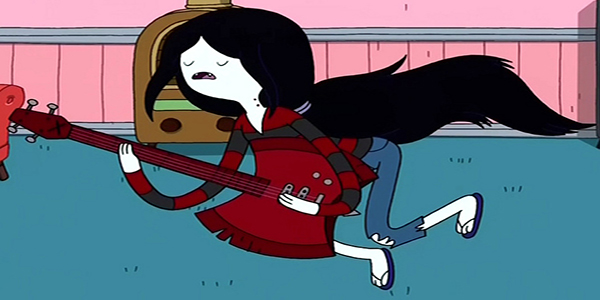