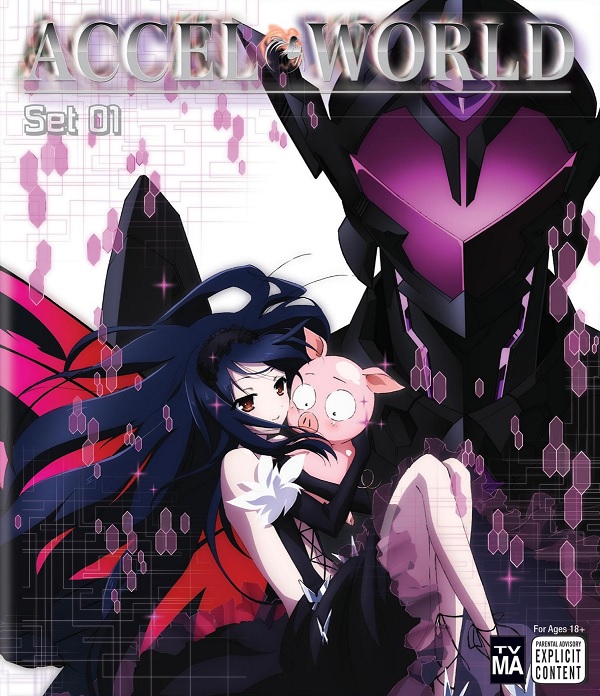 Overview
Technology has reached a point where people will freely spend hours of time playing a game on the computer, focusing on their cell phone, or simply escaping from life. Even before .hack explored the possibility of a real virtual world, many stories have explored that possibility. Although one of them reached a stunning level of popularity that overshadowed one of the writer’s earlier works, Accel World. Now that Viz has brought the first half of Accel World to North America, does Accel World deserve your attention?

Story
The story of Accel World takes place in 2046 where, fifteen years prior, scientists were able to develop a piece of technology that was called a “neuro-linker.” These neuro-linkers have allowed everyone to simply wear a collar around their neck which instantly allows them access to a completely integrated virtual network. 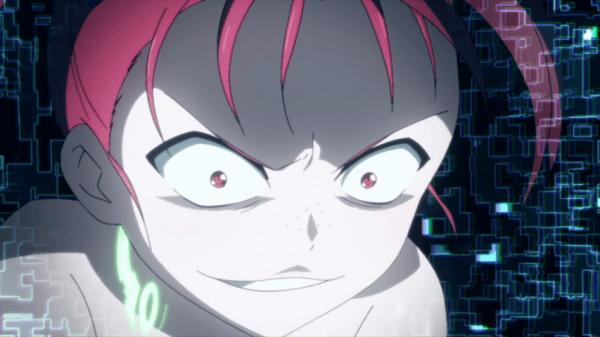 People use their neuro-linkers to take notes on virtual keyboards, move icons around, and pretty much anything they want with the sky being the limit. There are even virtual spaces where people can enter a virtual world using an avatar where they can do anything from simply hang out with friends to play games online through true virtual reality. However even as technology advances, the hearts of humans do not and bullying is just as much of an issue in the future as it is today.

As such, a young teenage boy named Haruyuki is forced to use a little pig avatar in the virtual world and in the real world he is relentlessly bullied by a number of people at school which leaves the poor kid with crippling self-esteem issues where he believes that even the two friends he still has are only with him and doing nice things out of pity. That all changes when the most popular girl in school, a girl named Kuroyukihime invites him to the upper classman’s lounge and introduces him to an entirely new aspect of the neuro-linker, something called Brain Burst. 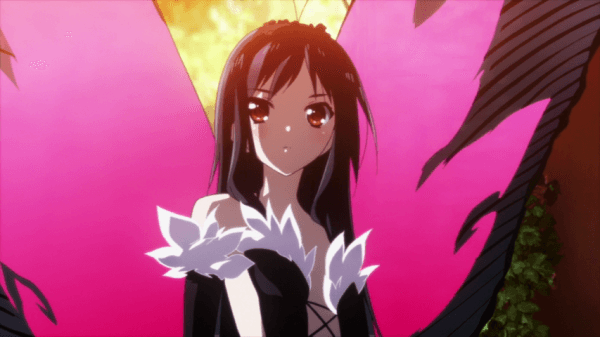 The Brain Burst program accelerates the human mind to such a speed that for every sixteen minutes that pass in the accelerated world, only one second passes in the normal world. After almost instantly clearing up his bullying problems, Kuroyukihime takes Haru under her wing after Haru learns that the Brain Burst program is actually a virtual reality fighting game. Anytime someone wishes to use the program and take advantage of a situation, such as pass tests, succeed at sports, or any number of things, the program requires a point to use.

The only way to gain these points is by fighting in the virtual world, however if one were to lose all of their points the program will instantly uninstall from their mind and in Haru’s case, separate him from Kuroyukihime. With the program using the user’s latent abilities and mental history to create a fighting avatar, Haru finds himself with a one of a kind avatar capable of using an ability no one has ever possessed in the history of the game. By joining forces with Kuroyukihime, Haru begins to work through his own issues while learning more about this virtual world. 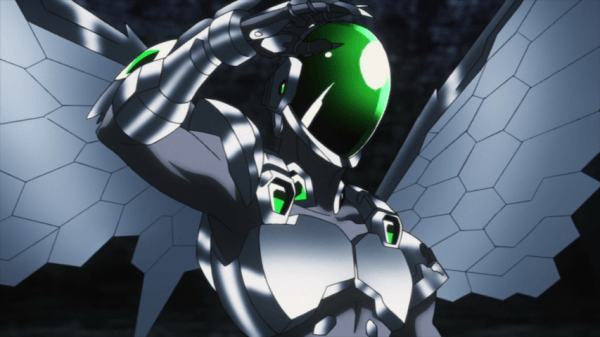 Now if this sounds a bit complicated then that is good, because the series goes to great lengths to introduce viewers to the various aspects of the Brain Burst program. This does mean that the beginning of the series tends to be a bit wordy, the fact that a bulk of this information is given to viewers at the start and slowly expanded upon over the course of the first twelve episodes is to the series’ benefit.

Haru tends to be a wimpy character at the start but it is clearly shown that this is due to the way that he has been treated and also thanks to his physical appearance. There are some elements of the dependence of technology explored in here as well, as prior to Haru’s knowledge of Brain Burst he would use it to run away and hide, and after Brain Burst is introduced it is treated as a cure-all where many users would do anything to keep the Brain Burst program thanks to its benefits. 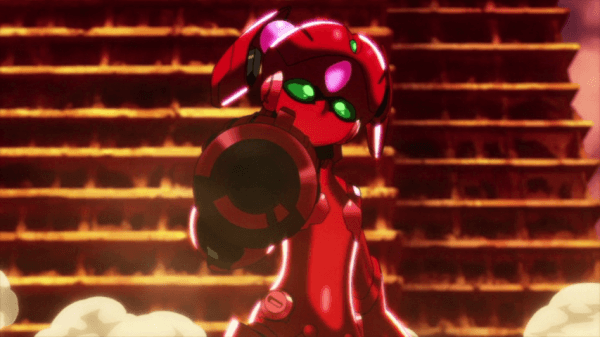 Thanks to the amount of information provided to viewers to start everything off with, the Brain Burst program is a bit easier to understand and as such viewers can then enjoy the enjoyable character element of the series and some real world comedy, which for this first half focuses mostly on Haru, the relationship between him and his friends, and even some new friends that are made after struggling alongside them to take down a shared enemy. This first set ends on a rather solid stopping point at the conclusion of an interesting arc which explores Kuroyukihime’s past and expands upon a number of potential problems that may arise in the future.

Visuals
You have to give Sunrise a lot of credit for what they were able to do with Accel World. You see, every time the Brain Burst fighting program is activated it takes players to a ruined version of their current area and seeing the stark parallel between the two worlds is quite striking thanks to how incredibly detailed most of the background scenery is. 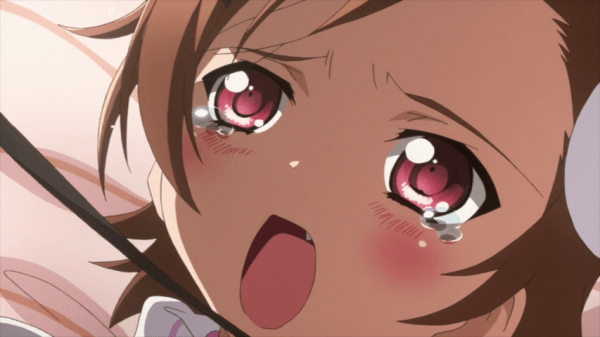 As for the characters themselves, the real world character designs have some basic clothing designs but they have some wonderful looking facial expressions. That being said, there is some rather odd anatomy at work for a certain character named Niko which makes her body look strangely proportioned, though considering Haru’s appearance it isn’t too odd. As for the designs of the avatars they are varied well enough and have some great looking designs that look even better when they are in action thanks to fluid animation.

Audio
Viz Media has given Accel World Set 1 an English dub and the original Japanese voice track is also available in the release and while the English cast does a great job with their characters, I must say that I am quite pleased that Kira Buckland managed to do such a great job with Kuroyukihime’s voice as she has the largest speaking role in the series and a lot of the explanation sequences wouldn’t have been tolerable if it wasn’t handled well. 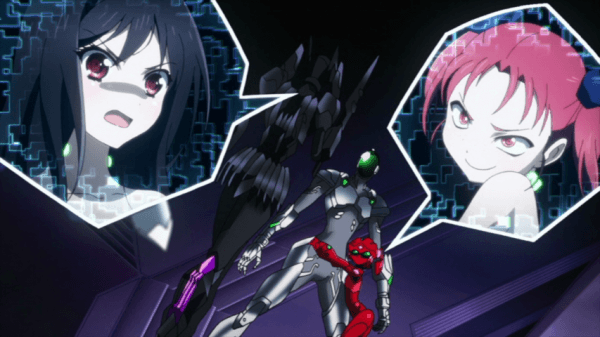 The series’ background music has been rather impressive throughout Set 1 as it does a great job to help bring out the most in any particular moment. As far as the theme songs go, the opening song “Chase the World” by May’n and ending song “unfinished” by KOTOKO feat. FripSide are both increadible songs that are paired with some great animation sequences, making them nearly impossible to skip past.

Extras
As far as bonus features go, with this DVD release of Accel World Set 1 a very basic set of on-disc extras have been included. The case itself is simplistic and only features a packed-in slip for Neon Alley with the discs featuring art of Haru and of Silver Crow. 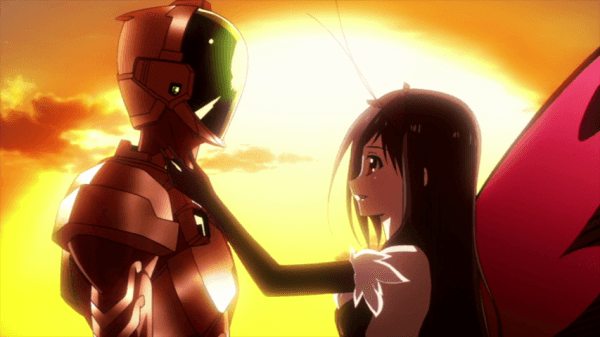 The on-disc bonuses feature a clean version of the great opening and ending themes, a trailer for Accel World, trailers for other Viz Media releases and also an art gallery that consists of twenty two images that focus almost entirely on character art for the main cast and some of the side-characters.

Overall
Accel World Set 1 manages to throw a lot of information the viewer’s way at the start of the show but this is nicely handled thanks to some great voicework by the English cast and because of how built the world is, there is time to explore the characters and take viewers through a number of story arcs in the first half of the series. With great artwork, fluid animation, and an enjoyable storyline with a likable cast of characters, Accel World Set 1 sets the stage for a great series that will continue to unfold in the future. 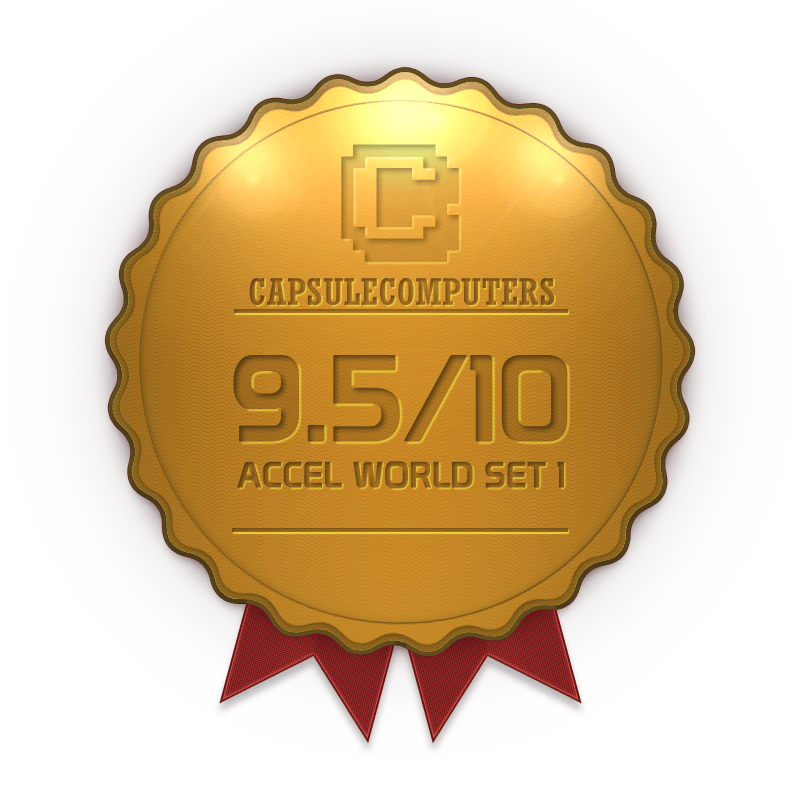